So, after about 6 months of successful Shapeoko use, I’ve hit my patience limit with disconnects due to static discharge and I have noticed some others having similar issues on the unofficial FB page as well. My machine is in my garage and I live in Colorado at 7000 feet of altitude. So the air is ridiculously dry year round, but particularly so in the winter. From reading the wiki and other posts here, I plan on attacking the problem like this:

3 — one thing which seems to help is to put the router and the machine on separate surge protectors, then plug both of those into something which affords an e-stop switch

4 — ground each isolated electrical component back to ground in a star topology — the V-wheels don’t conduct, and if the powder coating on a plate isolates its elements ground the ones which seem possible to interfere back to the ground on their own ground wire.

I had the same issues. As the air got dryer here, the failures increased tremendously. 100% unreliable. I cut short 8-12 minute runs of plastic sheet.
I already have my Dewalt router and shop vac on a separate circuit than my Shapeoko and MAC.
I added a grounding cable to my router, stock is 18AWG and I matched a new cable to fit.
I connected the Z axis to the X axis by the stepper bolts, running the cable through the cable trough, and X to the Y axis with the homing switch bolt to a frame bolt. All the frame is grounded back to the router. That has solved all my problems. 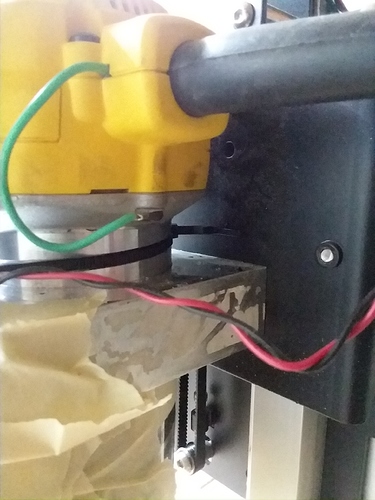 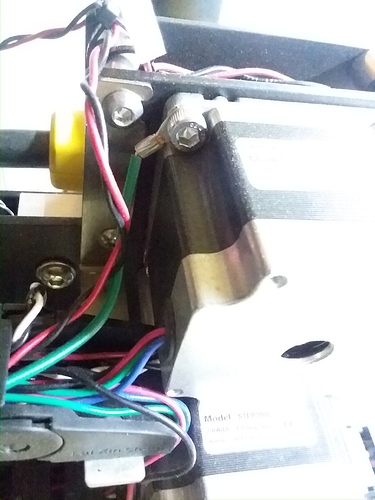 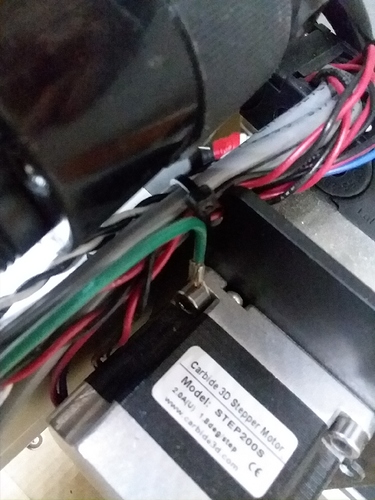 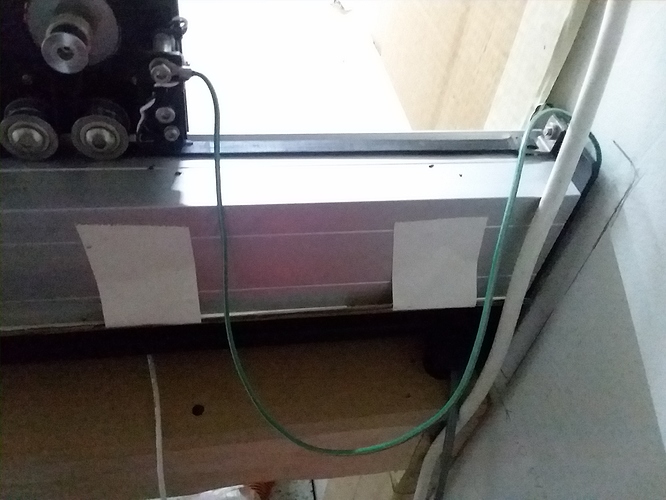 Had same problems as soon as I added dust control…especially cutting MDF. Pounded a 6’ metal rod thru shop floor and earth grounded ALL axies and router. Also added static resistant hose…disconnects went away.

Evan
I live at 6847 feet elevation in Colorado. It’s not that difficult to ground the rails and router.

I will try to post photos this evening of how my solution minimed disconnects.

I was suffering with EMI for 6 months or so and tried the majority of the recommendations from Carbide3D with little success. Finally, I just arranged the electric cables in a way that they are separated from the signal cable and from the machine frame (see photo). The machine has been running without EMI problems for about 7 months so far. We have a couple of similar things at: https://www.shapeoko.com/wiki/index.php/Cable_Management — yours evokes

and this problem is a familiar one to folks, so at least one person just got an iron cord holder: https://groups.google.com/forum/#!topic/shapeoko/cJMQ_keO1eo

I’m happy to report I am still disconnect-free for several months since I ran a ground wire from the DW611 body to a grounded outlet. I say try that first.

All, thanks for the helpful replies especially with pictures. To be clear, I think my problems are strictly from an ESD perspective and not an EMI one. I don’t think we can consider those the same.

@WillAdams, great idea about a separate surge protector. My current E-stop is a proper “big red” button style, but it is essentially wired like a simple light switch circuit, but instead of the light, the switch controls power to a standard single gang outlet. The machine and router are plugged into those outlets so the E-stop controls both. Putting surge protectors in that loop may help.

@HAL9000 and @Griff, yes I think getting a proper ground for my router is the first step as well. That’s in the works. I understand @HAL9000, how you grounded your Axes, but how are they connected from Z-axis to router?

@Lewscrew, to answer your questions: I have a standard SO3, newer power supply (I think, purchased my machine this summer?), 2.4d controller. For dust collection, I have a Rigid vac, and I hope santa brings me a dust deputy. I was using a Suckit Dust boot, but recently removed it. The design works well for the Dewalt Router, but I have the Makita, and it sucks because you have limited ways to position the router before it binds up and you lose Z-axis travel room. this is due to the relatively square shape of the top of the Makita, rather than the round Dewalt. I’m using an old desktop, but I haven’t seen any indications of USB power or EMI problems.

@mecas, I love your setup. Something to consider, but I’m not sure I’m having any EMI problems. I definitely have ESD problems.

Ok those hinge strips are brilliant

Sorry for asking but, Is it EMI produced by ESD?.

I don’t believe so. Early on, I learned that I could inadvertently cause an issue by vacuuming by hand while the machine was running. Get too close after a few minutes of vacuuming, and the discharge from the vacuum hose or nozzle, or me, to any of the aluminum rails or the router, would cause an immediate disconnect. Attaching the vacuum through a dust boot like the Suckit has the same effect. I recently gave myself the strongest static shock I’ve ever felt simply by brushing up against the extrusion while the machine was running. I would think EMI would be more sporadic in appearance and difficult to note what happened. For reference, we also have issues here when we get out of our cars. I’ve learned to get out and shut my car door with my clothed forearm instead of my bare hand. The static discharge can be fairly severe. Maybe I’m just a super conducting mutant and don’t know it yet.

The kind of electrical discharge you are talking should be enough to damage the board or/and the computer. I believe the disconnection happens thru EMI caused by ESD otherwise the board should be fried long time ago.

Yeah you are probably right about that. I definitely think giving that ESD a place to go to ground other than through the board is the way to go.

In had some disconnects due to what I believe was static. I made an earth plug and connected the wire to the top bolt of one of the z axis springs. I have not had a single bit of trouble since that. My belief is that you don’t need to go to the Nth degree to ensure the ground has absolute continuity throughout the chassis because all the static is generated around the z plate (vac and router) and static loves to find the least path of resistance to ground. Just my 2 cents and it seems to work so far. 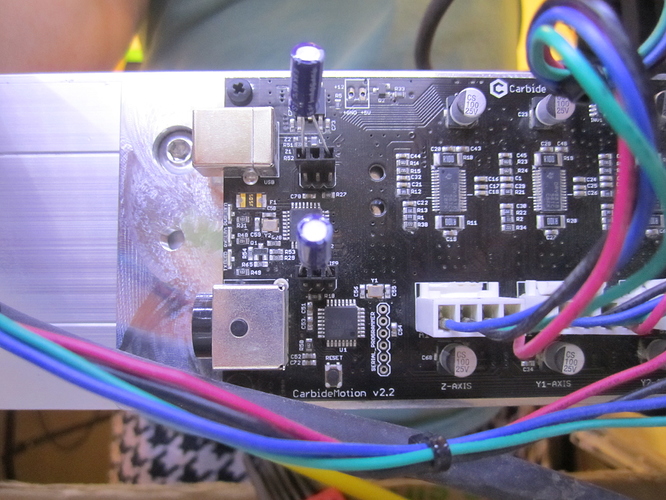 I have the end-all, be-all solution to all your problems. Put 1uF caps (blue caps in the picture) across the power and ground pins of the ISP headers for both chips. This adds more bypass protection than what comes on the board and keeps the chips from glitching when noise comes across the lines.

Router body is metal and grounds Z axis through mount.

Thanks all for the help. I made a separate thread for putting a grounding cord on the Makita router, as that was step 1. Will see if that makes a difference, and work on incrementally attacking the problem.

Makita Router - adding a three prong plug How To

Others have done this with the Dewalt, but just a quick write up on how to add a plug with a ground to the Makita router. I have a separate thread in this forum that discusses problems with electro static discharge, and this is the first recommended step to helping with that problem. Its a 30 minute job or less. The cord I bought from Amazon is 18 AWG with a 300V rating and has a higher temp rating than the factory one, plus its much longer. Removing the cover is pretty simple, just take out…

My machine would freeze if I turned off a fan in the other room!

I live in an old apartment building with no separate ground and with every outlet on the same circuit. I tried putting a 2200uF cap on the power input to the board, but it didn’t help. I think it was too big to respond to the fast transients. Anyways, putting the additional bypass capacitors right at the chips was the only thing that has worked. It’s been over a year now with no glitching!