Anyone Use Box-o-matic for their CNC

Box-o-Matic id a tool that generated SVG files for various box/ joinery styles. Seems similar to some features in VCarve that does similar stuff.

I am waiting on my 5 which will be my first CNC but currently make boxes mostly via a router jig or by hand. I am hoping the CNC can help especially with drawers that can be very tedious if you have a lot to build

Curious if anyone has used this of similar tools.

The problem is, these designs are workable because they assume the narrow kerf of a laser.

I looked into using such generators on our machines at:

Cutting box joints on boards flat on the machine

There are a lot of other joinery options, esp.: 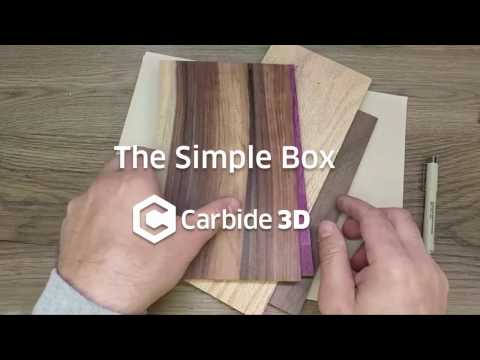 which is discussed at:

There is a very cool video on this at: [A Simple CNC Box] which unfortunately, doesn’t go into depth about the CAD/CAM aspects of this. Since it’s so simple, it’s an excellent project to show one technique for drawing it up. c.f., Start by installing and launching your favourite CAD/CAM app — we’ll use Carbide Create for this. Actually, no. Start by deciding the dimensions of the box, and determining what thickness(es) of material will be used.

and which I looked into at:

The SO5’s optional overhang allows one to cut traditional joinery if one builds a vertical fixture, and are willing to commit to the additional operations which that entails.

I’ve been working on a joinery technique:

which has been successful to the point that I’ve begun a serious project using it — have the stock, and it’s mostly drawn up — should be cutting this evening or the next.

If you have a box style and dimensions (height, width, depth, stock thickness and lid style)

As funny as a $3 dollar box Tutorials

Let me know and I’ll gladly work up step-by-step instructions for drawing it up in Carbide Create.

If you have any other ideas or suggestions, I’d be glad of them.

I use www.makercase.com as it allows you to add in dogbones for CNC.

If you’re willing to allow visible voids, and endgrain.

A cabinetmaker whom I learned an awful lot from, hanging out in his shop after school (he was my great aunt’s bridge partner’s husband) had this to say about endgrain in a piece of wood:

It’s like a person’s belly button — you know a person has one, but you probably don’t want to see it.

In some cases I think it is a cool part of the aesthetic, but usually laminated material like baltic birch. But that may just be the old skateboarder in me.