Engraving a picture in granite?

I’ve been wanting to try this for a while and came into some time over the holiday to experiment. I played around with different cross-hatch densities to come up with a gray-scale. Then took a high-contrast picture, converted it into gray-scale using 5 or 6 shades and converted those areas into engraving tool paths in v-carve for a diamond drag bit in black granite. Overall, it’s not spectacular, but I think it has promise. The drop off from light to dark needs to be more dramatic for the picture effect to come through I think. 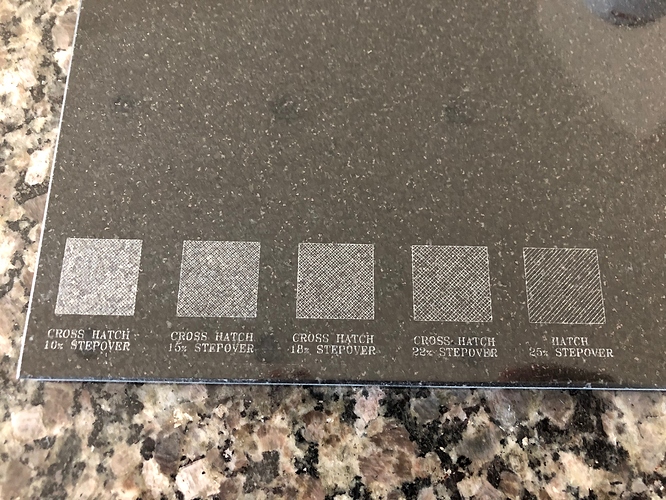 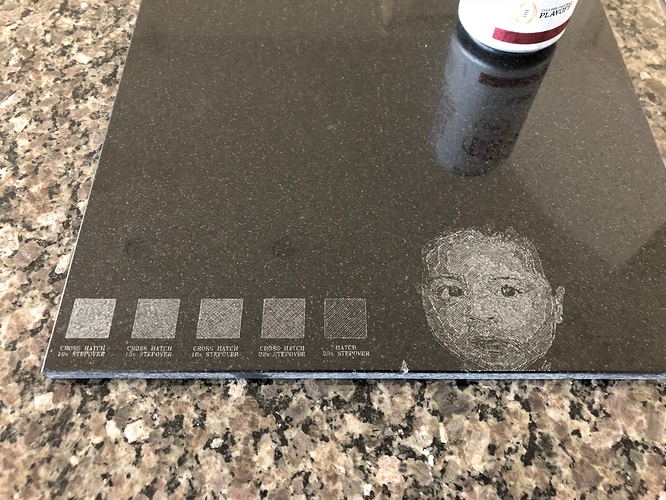 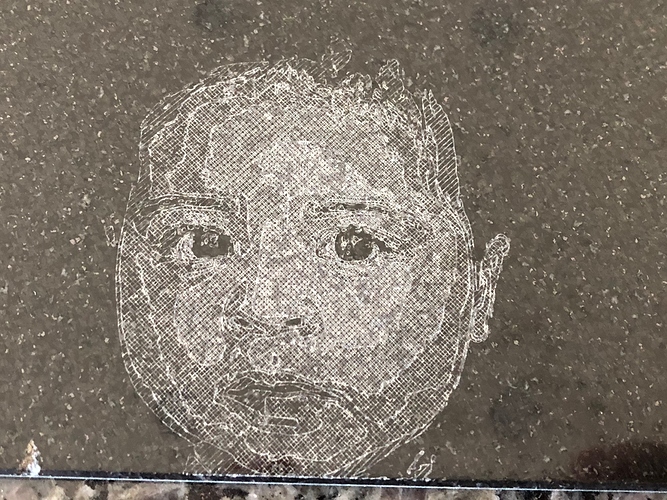 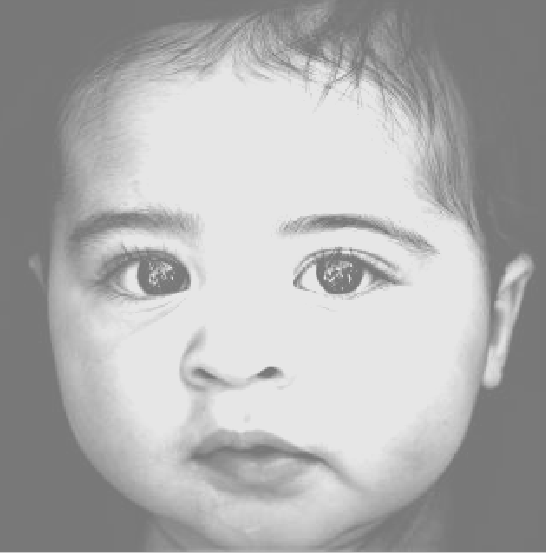 Here was my first go at diamond drag engraving.

I created separate bits with different widths in V-Carve so I only had to select the bit that corresponded to the line spacing I wanted instead of having to manipulate the image too much. Then just determine what angle I want the lines and whether I want hatching or cross hatching and let it go.

Nice work. I have a few question on the process. Do you insert the drag bit in the router? Is the drag bit spring loaded? Is this done dry or with a lubricant like water? What are your feed and speed settings? Any other tips for someone wanting to try this?

Nice work. I have a few question on the process. Do you insert the drag bit in the router?

Yes, the diamond drag bit goes in the router, and the router is not turned on. I re-purposed my SO3, so for its foreseeable future, it is going to be dedicated to diamond drag engraving, so I removed the power cord from the router since it was in the way.

Is the drag bit spring loaded?

Yes, this is the diamond drag bit I am using, although there are others available. I bought 60deg, 90deg and 120deg bits, but I am using the 90deg bit for all of the black granite, and since the red granite seems to be harder, I use the 60deg bit on it. I have the bit plunge and compress the bit ~0.10in for engraving.

Is this done dry or with a lubricant like water?

It can be run dry, but I prefer to add a thin layer of water from a small 2oz bottle with a drop of dish soap to break the surface tension.

What are your feed and speed settings?

I created a bunch of different DDE bits with different stepover values in V-Carve. Plunge is 30IPM and speed is 100IPM. 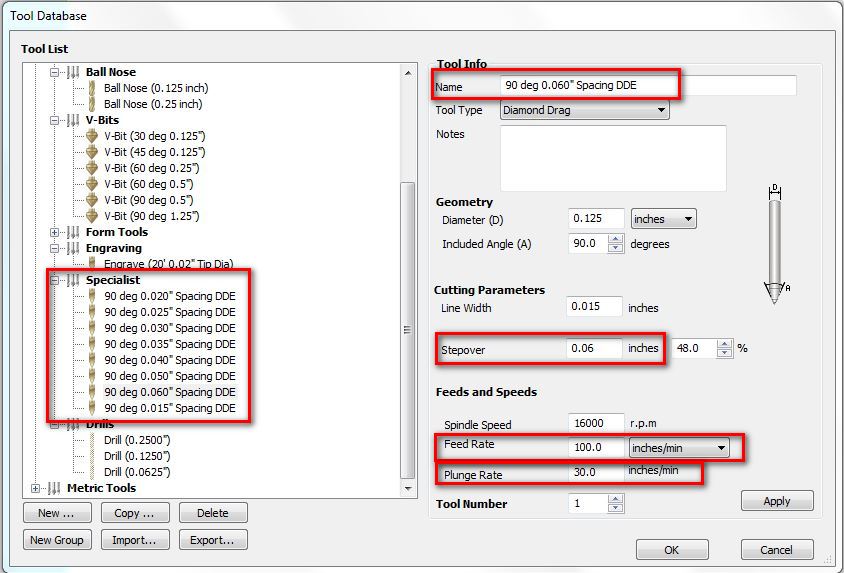 Any other tips for someone wanting to try this?

Just buy a dark colored stone tile and go for it. Start with a simple logo that doesn’t require shading. Like a sports team or just words. Here are the ones I have done so far. I started with simple ones and I am working my way up (as I get time) to do more complex ones. Don’t buy ceramic porcelain tile. Granite or marble are good. Slate is really soft and too easily scratched.

Thank you, you connected the dots. You have done good work and shared your knowledge. When you say 'ceramic" I assume you mean porcelain because this material is very hard but from my experience installing ceramic, porcelain, marble and granite in renovations, regular ceramic is probably not harder than slate for example however, the “carved” part on ceramic and porcelain would show as brown, maybe not the look one would be looking for. I will look at ordering some bits to give it a try.

MadHatter pretty much nailed everything I would’ve mentioned, so thank you! The one thing I would add is to just get a diamond bit and a tile or two and play around. Figure out what works for you, figure out your workflow and go from there. Have fun with it!

Glad to have helped. I edited my post regarding the ceramic/ /porcelain error.

@MadHatter, I looked at the description on the website and I had a question on the tool. I sent a message to the supplier to confirm if the diamond inserts are included with the tool and which ones are included. I received no answer yet. Maybe you can confirm? I don’t want to purchase something where I don’t have all the necessary parts to start engraving.

I’m almost positive it comes with a 120deg bit, but when I ordered it, I bought the 90deg and 60deg bit as well. I am still using my first 90deg bit, so they last a while. I have only used the 120deg bit on some plastic stuff of mine I marked for work so it couldn’t “accidentally” disappear into someone else’s tool box. I’ve never had an issue with stuff disappearing, but why find out the hard way.

Which leads me to believe the tool came with a 120deg bit because the way I am, I would have wanted a working bit plus a spare bit in case anything bad happens, I would have a “hot spare” ready for use until a replacement showed up.

Also, a couple of months later I bought:

BUT! I bought them from here: https://www.homanndesigns.com because when I bought them, they were sold out on the Benchtop Precision website and I am impatient. Now, this is back in 2016, so it’s been a while, and it looks like they dropped the 60deg and 75deg bits. Maybe if you want them you can email them and ask nicely?

@MadHatter, just to let you know that I tried to contact Benchtop another time without success and for some reason, even after I registered as a user on their site, I cannot put items in my cart, just the wish list hence my second e-mail. Are these guys serious? If they don’t reply to inquiries, how do I know they will ship.

Trying to find an alternative site to get the tool, homandesign is in Australia. I see a number of similar on e-bay but not for the same tool.

I did some looking around, and it appears that BTP is a single person who is not good at responding to customers. I can’t be certain, but that might have been why I went with Homann Designs. I was doing a flurry of researching and ordering for my SO3 at that time, and it could have been as simple as HD had the parts in stock and BTP did not.

I’d just send HomannDesigns an email. Worst case is nothing comes of it, but when I ordered from them, they shipped promptly. Yes, I paid more to get my tools to the US, but they arrived faster than if I had ordered from BTP.

Thanks, that is too bad that this person is so unresponsive. I just ordered from E-Bay a similar tool and bits, hopefully they will work as well. Further complicating this, we just had a postal strike in Canada and all shipments by mail are delayed, it may take until after the Holidays before they catch-up. The post office had asked the foreign post services to hold deliveries to Canada. I sent to family in the US, they will bring the stuff when they come here for the holidays.

I’m pretty sure this is the one I have:

(See the diagram to show the actual angle of the tool) Many people are confused by what angle you are actually getting. I drew the sketch to help clarify the tool. It can be used on any engraving machine that has a 1/4" collet. | eBay!

I have not tried it in hard material, only acrylic, but my results were very good. Here’s some examples:

After much musing Gallery

Ok, I kinda got derailed messing with last weeks contest: After I did that final little project I started playing around and seeing just what I could do within the Carbide Create workspace with acrylic. I own VCarve Desktop, and like it a lot, but I wanted to see if I could pull off some acrylic drag engraving within Carbide Create, turns out I can: [IMG_1408] I used a spring loaded drag engraving bit found here: http://www.ebay.com/itm/CNC-DRAG-ENGRAVING-TOOL-BIT-SPRING-LOADED-DIAMOND-SHE…

I think this is the one I ordered too. As I said above, I will have to wait a bit to try it.