Thanks Rob. Now I need to try 411 with the “regular” F360 post processor for Carbide 3D machines.

Is there a test build of 411 for OSX ?
Seems an official build has not been released yet.

I don’t believe so, I think it’s coming

Just following up on this. I had been running CM 410 for a little bit along with GRBL 1.1; no issues so far. I did get the arc endpoint error that started this thread using a toolpath from Fusion 360. I found this thread, updated to Build 411, and it did solve the problem. I did notice though that in 411, I get some bugs when jogging the machine but I can’t reproduce the exact conditions that cause the problem. Sometimes when jogging with either my miniature wireless Bluetooth keypad or just by using the mouse, CM seems to hang where I can click the buttons in jogging screen, but I can’t get the machine to respond. Sometimes it takes a complete restart of CM in order to fix the issue.

@robgrz, I know that 411 isn’t probably ready for full public consumption yet, so just wanted to note the behavior. I wish I had more data to give. I will start paying attention to see if I can point to certain conditions.

I went back into fusion and changed all my Arc points into Lines, then fillet the edges to create the same arc. Exported and it worked perfectly with no error. A quick fix if anyone is stuck.

Fixes the arc error, but breaks tool changes from “sort of broken” to totally broken on shapeoko.

How did you do that? I am getting this error and the job i am running couldnt be any easier…

I think what I did was a fluke and not repeatable.

I just downloaded CM 4.11 from the dropbox above and I haven’t seen that problem again.

I upgraded to 4.11 two days ago and my Fusion 360 G-Code using the standard Carbide 3D Post Processor has been working fine since then. I always run each tool in a separate G-Code file, so I do not have much input on tool changes, but it handles the normal one at the beginning of the G-code just fine. I have run six or seven successful projects since the upgrade.

In what way are they “totally broken” instead of “sort of broken”?

Also, FYI, we put up a beta page at http://carbide3d.com/carbidemotion/beta

For the Nomad, nothing seems to have changed. For the shapeoko though…
Prior:

When the machine got to the T command

Now:
When the machine gets to the T command

I went and tried this out again. It works in the previous “kinda broken” way with meshcam, but no longer moves the spindle front and center, which it used to. It still turns on the spindle instead of turning it off.

Urg, I’m having the same issue. I’m having one use Aspire since CC doesn’t need have an option to choose a node for a starting point in a path which is a must as I’m having a dovetail cut into the work and leave the work for each dovetail pass without plunging or exiting the cut on the material.

I updated to the most recent version of CM 521 and got the same message. The test toolpath in aspire runs a simulation and shows no errors so I doubt its the file after reading this thread. Seems like Aspire and Nomad’s have issues together. I’m running Nomad 883 Pro #1306

Does anyone know of a program I can switch to that allows you to choose a toolpaths start location via the node and works with Carbide 3D machines? I’d hate to have to buy a new machine to do this work but it’s a necessary part of my business and I’m having to do it on a pin router at the moment. Fun times. 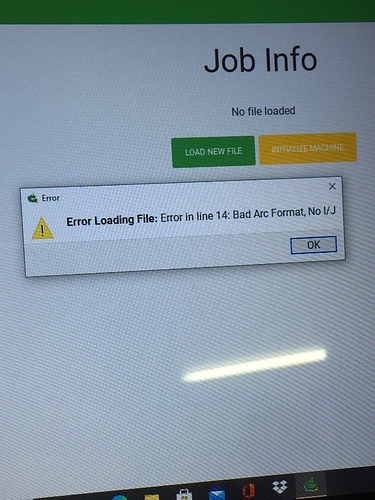 Can you post the first 15 lines of your g-code file?

I’m using inches I believe so I can try switching to mm’s and see what happens. I usually use Carbide Create for everything and rarely use Aspire. I hope the new Carbide Create Pro will have the option to pick the start location of cuts.

I believe this is a matter of the post-processor you selected in Aspire.
G2 commands with the Shapeoko/GRBL post-processors usually have the I and J params explicitly specified, rather that this version where just the radius is there.
What post-processor did you select in the list in Aspire ?

Not sure what the post processor is. I guess its built into the programs I’m using as I’ve been using the Nomad for well over a year, mostly with Carbide Create, almost daily and it works great. I’d really like to use my Aspire 4 software but I get this error any time I try to use it for anything, even when files that work fine through Carbide Create, although without an option to select the start position of the cut I cannot use CC for this project. I’m cutting the reed pan for a concertina and the reeds are dovetailed into the wood. The dovetail bit has to plunge off the work make the cut and retract back off the work and go to the next slot and repeat 15 times, then I flip it over and do the other side.