So I’ve made a few projects so far, and for each I’ve manually put in dogbones and such, but I’m aiming to do some more complex stuff now, and the prospect of intricately creating dogbones for each inner corner throughout the piece of furniture is super daunting.

Plus, I’ve come across some really interesting CNC-specific joinery options that look beautiful. 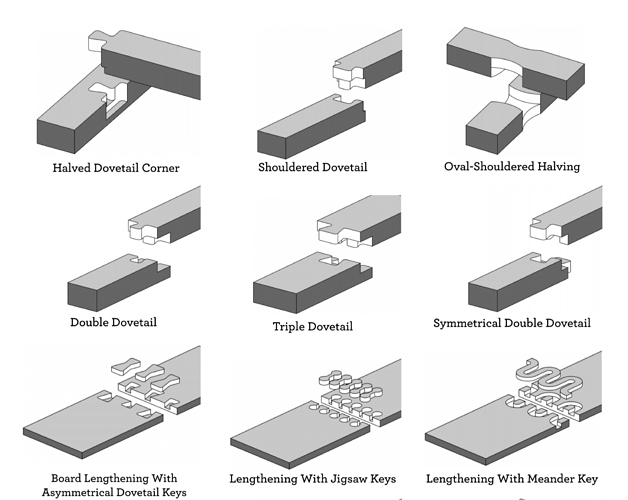 (that’s from the Instructables 50 Digital Joints)

Also come across this in Make Magazine:

So I could probably manage to manually create some of these joints, but is the idea that one would manually put these all over a piece of work? Is there an automated way to do this? (ala a laser cutting box maker app or something)

This is something which I’ve been exploring.

There is a rabbeted box generator for Carbide Create:

I wrote a small app to create plans for rabbeted boxes on my S3. I wanted something where I could just type in the board thickness + width/height/length of the box I wanted, and have a plan ready to cut. It’s fairly simple right now; the rabbets are just calculated at 1/2 the thickness of the boards, but they should be ready to glue or fasten together. http://chaunax.com/shapeoko/twhl.html Since the Carbide Create .c2d file is in a readable format, I was able to create the entire .c2d file, al…

and I just worked up Knapp joints:

Has anyone ever tried to create Knapp joints with their CNC? It looks like a very good candidate for CNC joinery.

and before that had done

Next up is more boxes, this time for magazine storage — for my part I just cut open Fed Ex boxes: [WIN_20190912_14_02_59_Pro] But they’re not always available in a suitable size for typical magazines. There are a number of commercial options: So there is certainly precedent for wooden boxes — we’ll try for an inexpensive material, since this is going to be a fairly large project (sorry Nomad owners) — Luan Plywood is available at most home centers, usually as underlayment, a bit of care …

Hi All I am new to this entire process. Have anyone created any dovetail joints using Carbide Create? If you have can you please upload a your carbide create file. Thanks in advance

I’m currently working through re-doing a different rabbeted box generator which will have a sliding lid:

and I also worked up an interesting blind miter with hidden spline joint (I think that one is in the lounge).

Also, there are (were) two commercial options:

This one is closing down as of April:

These are some great options!

I’ve seen people do vertical jigs for larger CNCs but didn’t think that’d be possible with an SO3(XL). I’ll have a look at that, as it would make a lot of this kind of work easier (to machine).

From a quick look through the links, it appears that most of these things export gcode straight up, so I guess the workflow for these things is that you just use the app or function and that’s it? (As opposed to create a project/body/component/etc… in Fusion and then applying things like this to them)

I’ve been looking at doing that with opensource stuff, but haven’t really found a tool which is a good fit for making G-Code and I prefer the idea of making a .c2d file.

Yes, folks who are willing to submit to being vulnerable to Autodesk’s licensing whims could do this sort of thing in Autodesk Fusion 360 (and it might be possible in Alibre Atom3D — I did one parametric design there), but that’s not me (for Fusion 360).

I will probably look into the 30 degree endmill idea, since the commercial product which does that is going away — I think I could use a similar fixture to the one I have planned for the blind miters w/ hidden splines.

Pretty much finished the rabbeted box chapter — any comments or corrections would be welcome. Next up will be uploading the files to BlockSCAD, Thingiverse, and Cutrocket after cutting one myself.

Ah right, I gotcha. I’ve only really ever used Fusion with their free “maker” license, so I haven’t seen any of their whims, but being active in lots of music software worlds, I completely understand the reservations with massive corporations holding all the license cards.

Yeah, that’s what I meant. Generating some kind of thing which is then opened in an environment/editor (not as raw gcode). I’ve seen some things where you can run scripts in Fusion to automatically apply dogbones and such, but not run into anything more complex like this.

That Knapp joint stuff is quite interesting too, and fascinating that it’s actually an oldschool joint that can have a new life in this CNC world!

I used VCarve to create the Knapp joint. It took about an hour to make the fixture for vertical milling with leftover wood and hardware. It is not as fancy as the one made by @WillAdams but it is solid and accurate. 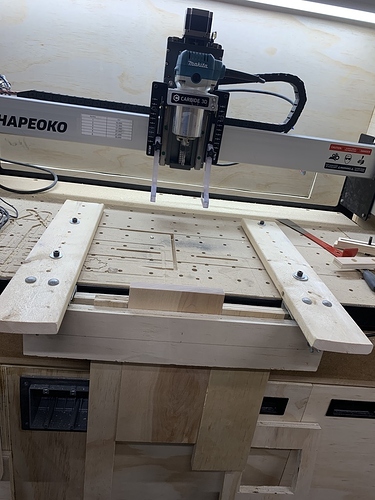 Huh, I really like your setup. I’d been lacking the desire to get a setup for joinery in place after seeing Richard Cournoyer’s right angle bracket jig out of aluminum.

This one looks simple enough to make out of MDF/plywood or aluminum and bracket it up without it needed to hang down a lot vertically. Thanks for sharing the picture!

It is really simple look at how it is made under. I use two metal angles (2"X2"), 4 bolts to hold those to the horizontal support (1"X4") that have holes to attach to my wasteboard, two pieces of 3/4in plywood to hold the workpieces attached with two 4in bolts with butterfly nut to attach them to the metal angle.

Here is a look under the fixture. 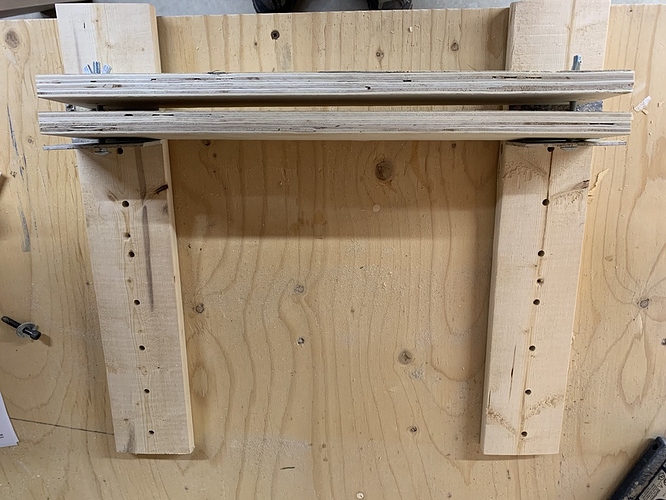 Do you find that it’s enough support when plunging down material? (vs something like @WillAdams’ approach that supports the wood from underneath as well with the crazy long bolts)

Well the only thing I can say is that I never had material move any time I used it. The only thing I would change is to use hardwood to replace the plywood to increase stiffness because as you see in the first picture, I had to place material on either side to ensure the plywood stayed flat. I did not have any spare hardwood properly sized when I built the fixture.

I will note that I expect the wood to be held in place by clamps at the top (I ground off a couple to fit, and sourced a few more intend for clamping as stops which I need to fabricate some sort of bracket for) — the threaded rods and speed nuts and bottom support are simply to allow consistent positioning and easy adjustment of board positioning.

I loved the flexible wood book covers had anyone managed to do this on their shapeoko, it would be great to try but I’m just a newbie so beyond me.

Those should be trivial — just mill out a series of pockets or V carvings which are periodic along the length of the axis — try drawing one out and doing a test cut in a scrap of material — if it doesn’t work, post your file and a photo of the results and we’ll do our best to work through it with you.

On a Fusion360 tip, I’m sure many have come across this add-in already, but I came across Dogbone which makes some nice automated work of the process.

Obviously from the name it’s only good for dogbones, but at least it’s something.

What sort of joinery would you like to do?

Let me know the details of:

and I’ll gladly work up a parametric instance for cutting it out. 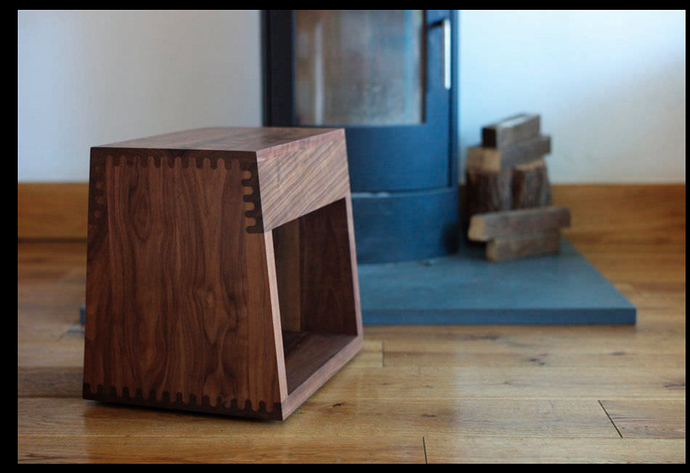 I actually modeled a bunch of it manually (which was a bit of a pain) before realized I wouldn’t be able to cut the geometry from the base (before I saw the stuff about a vertical joint). 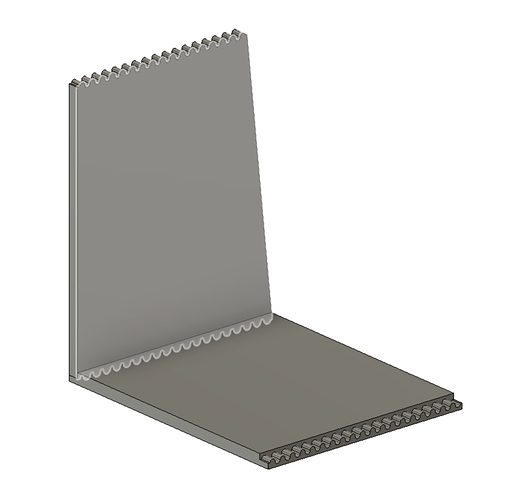 I ended up making a more vanilla-tab design, including manually putting in the dogbones (this is before I found the Dogbone add-in I linked above): 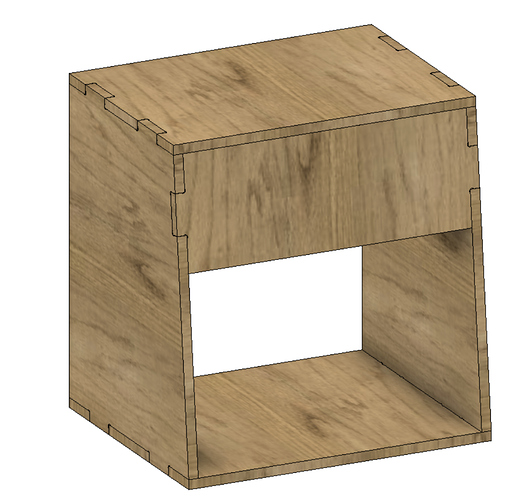 Do you need assistance making a file for this? Dimensions? Stock thickness?

It’s quite reminiscent of: Design into 3D: Boxes: Magazine storage

I think I can manage creating the shapes, and have been getting my head around parameters, now after watching a bunch more videos.

Oh, that’s quite nice! So many old/exciting posts on here.