I’ve got some experience with my laser engraving using Gcode generated by Excel, Inkscape, & Laserweb. As far as i know they programs can only work on flat patterns. Is there a program that can export files to a shapeoko that can engranve on a curved surface?

Ideally I’d like it to be Fusion360 as that is my main modelling tool. However I can’t sesm to get that working.

I did this once, but using Carbide Create Pro and a grayscale heightmap generated from the original 3D surface, the thread is here

Hi folks, Since I had fun 3D-carving stuff using CC Pro for the challenge dare last week, and since I had a second block of 3"x5" Renshape left, I tried something a bit different. I started by generating a wavy surface in the first online plotter I found that happened to allow exporting the resut as an STL file: [CalcPlot3D] Then imported the STL in @fenrus’ online converter, and got this heightmap [wavy_surface] which I imported that in CC Pro, [image] created a roughing toolpath wit… 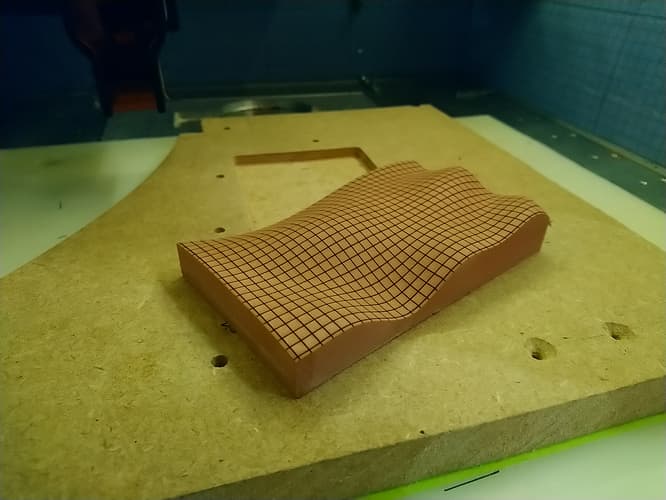 The second option I have in mind would be to use one of @fenrus cool g-code manipulation tools, that can “wrap” any 2D g-code (as generated by typically laser software) onto another 3D G-code (as can be generated by a Fusion360 toolpath). It’s all in this thread and I believe this would probably be the most straightfoward approach for what you want to do, and it’s compatible with using Fusion360.

A word of warning: if you have a protective shroud on your laser as I have on mine, be careful that the 3D lasering path you generate this way does not lead to any collisions between the surface and the bottom of the laser shroud. For relatively smooth 3D surfaces this should not be a problem, but if you have large depth variations in your 3D surface from one point to the next, it’s definitely a risk.