After upgrading from S3XL to SProXXL I’ve been rather skeptical of belt tension. After several attempts it still just doesn’t feel tight enough so resurrecting this thread- Measuring belt tension, squaring and calibration 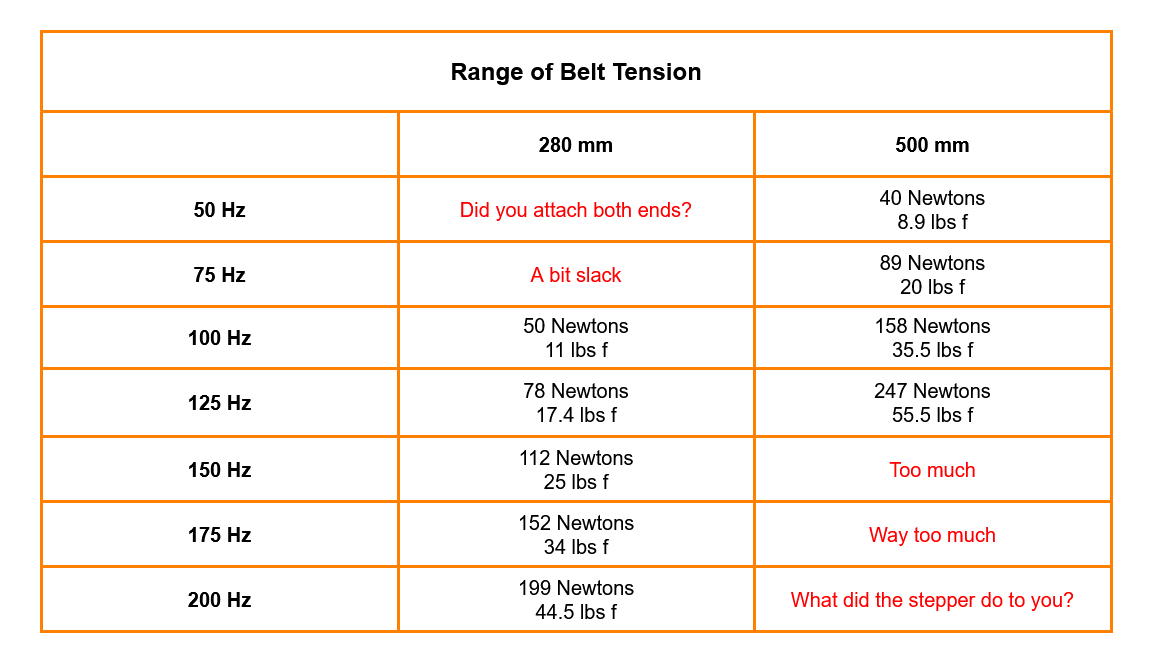 What is your machine doing or not doing that points you toward insufficient belt tension as the issue? There are quite a few issues which initially appear to be belt tension related but are actually fixed elsewhere.

I went back and looked at the spreadsheet I used to calculate that table and, you’re right, the frequencies should be different for the 15mm belts, they should be quite a bit lower as the belt width lowers the resonant frequency for the same static tension.

For the Pro XXL, assuming 500mm measurement distance on the long axes I get 75Hz being good for ~150N on the belt which is more than enough.

The minimum belt tension is set by the maximum holding torque of the stepper motors, which I believe is the same on the Pro as on the SO3. This is, in any case, well above what’s really needed as you can’t sensibly reach stationary holding torque on a motor when the machine is cutting as the motors are moving and the faster they’re moving the greater the torque falloff.

The maximum tension is set by the 6.35mm shaft on the stepper motor, I was not able to find good data from the OEM for the Shapeoko stepper motor but the better (Taiwanese, Japanese or USA) manufacturers of motors with 1/4" shafts all give a maximum radial load that the shaft and bearings are rated to. Twice the belt static tension at 150N is already a bit borderline for even the good motors.

The Pro has wider belts which moves the load point further down the shaft, increasing the leverage. One of the key failure modes for excess radial load is brittle fracture after work hardening of the stepper shaft.

Where can I buy SPARE STEPPER MOTORS for the Shapeoko PRO XXL? I need to make sure I can stay running, support at Carbide is already on sending me a replacement, but I want to have one or two on the shelf to allow me to keep rolling if an issue arises again. Anytime something has broken, and made my machine be down I have tried to stock up on replacement parts so I can keep rolling with minimal downtime. For reference my Pro runs most days 4-5 hours running mostly aluminum jobs, I have my new …

If you set cell B31 to 1.5 cm then the sheet will calculate belt tensions for 15mm belts based on the frequency in B28

My initial readings using a guitar tuner app on iPad Pro all show 47Hz.
This is AFTER several attempts to tighten the Y belts which, for whatever reason, seems to be more difficult than on the previous S3XL. I understand too tight is a bad thing but too loose is causing calibration issues.

That’s a little low, but it’s not that bad.

Are you seeing any actual cutting problems on the machine?

On the 15mm belt that’s about 60Newtons, 5.9kg vs. the 8.2kg zero speed holding torque of the stepper, so it’s not ideal, but unless you’re pushing the machine right to the limits on cutting force, not too bad either.

What’s preventing the belts coming up to tension? Are the teeth slipping through the clip as you do it up or is the belt stretching all the way and just not providing full tension?

If the belt is doing a lot of stretching then it’s tension modulus may be low indicating age or weak cores.

Thanks for the heads up re the spreadsheet. I looked over it earlier today but didn’t think about changing the values.

but didn’t think about changing the values.

In my defence, there weren’t any official Shapeokos with 15mm belts when I published it, the only one I knew of was in my shed…

Are you seeing any actual cutting problems on the machine?
I initially checked calibration using a very accurate Incra 18" rule only to find out the hard way anything past 24" gradually came up short the further it went. Cutting fret slots in a bass fretboard, these need to be rather precise.

What’s preventing the belts coming up to tension? Are the teeth slipping through the clip as you do it up or is the belt stretching all the way and just not providing full tension?
The 12mm long bolts securing the clip on each end just aren’t long enough to pull it tight.

If the belt is doing a lot of stretching then its tension modulus may be low indicating age or weak cores.
The machine has been in use for 2 months. If the belts are stretching already there’s a problem.

Yep, bad fret spacing might make the bass sound a bit Glen Matlock, I can see why you might not want that.

If the machine movement distance is variable over the axis travel you may have some funky belts. I’d try measuring relative spacing in steps over the full travel of the axis. Assuming all your rails are moving smoothly etc. then if the achieved movement for a commanded, say 200mm varies over the axis then I’d ask support for a replacement set of belts.

The way these belts are manufactured, the tooth spacing is remarkably consistent (except for the really cheap horrible far eastern belts) so only variability in tension modulus (stretchiness) across the length of the belt would account for different tooth spacing once tensioned, which would most likely indicate bad or damaged reinforcing fibres.

Ok using one 16mm long bolt (belt clip) on one side of each gantry made a world of difference. My initial readings around 47Hz weren’t readings at all. The belts were so loose they were just flapping against the gantry. After using the longer clip bolts the belts are able to ring and resonate freely like a guitar string. Both Y belts are just above 70Hz and within 2 to 3 Hz of each other. The X belt is now at approx 80Hz so I’ll leave it alone for now.
Also ran the 2 X end plates all the way to the front to double check. Is a .55mm (.021") variance off the front plates good enough or should I revisit that as well…?

When I move the X gantry all the way forward the right corner by the power button (Pro XXL) is .021" further away than the left front corner.

How square is the frame? That’s a great question…
Measuring corner to corner it’s off 1/32" but keep in mind that comes from a tape measure with a hook intended for construction and framing so I don’t necessarily trust it for anything precise. I have a nice variety of quality Starrett and Incra rules but the longest is 36". Even a large 24 x 16" framing square isn’t something I’d consider entirely accurate for an application like this.
Any tips from the pros on achieving very accurate measurements while squaring? Keep in mind, at the end of the day, I use my machine to cut hardwoods like mahogany, maple, limba, etc., and no metal.

I went back and looked at the spreadsheet I used to calculate that table and, you’re right, the frequencies should be different for the 15mm belts, they should be quite a bit lower as the belt width lowers the resonant frequency for the same static tension.
I’d be wary about adding tension to the belt on a Pro as I’d rather avoid adding my own set of pics to this thread
After reviewing the Broken Shaft thread I notice all 3 occurrences were with 15mm belts. One person did mention using the Hz method to tighten the belts so I wonder if all 3 did the same but used the much higher 100 - 125Hz range from the spreadsheet example as a target…?

For squaring, on a job where I’m worried about being well under 1mm off square over 700mm I have a workflow which might be useful.

Each square has a hole in the middle and can then be rotated to use a few times, the modelled small hole is 4.9mm to push a 5mm dowel pin into. 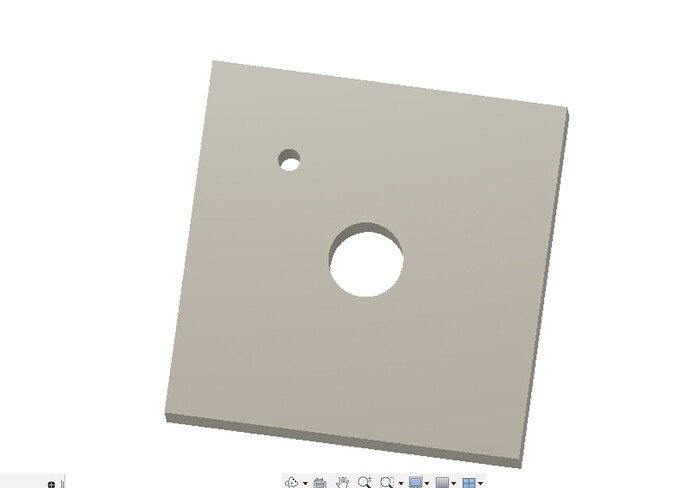 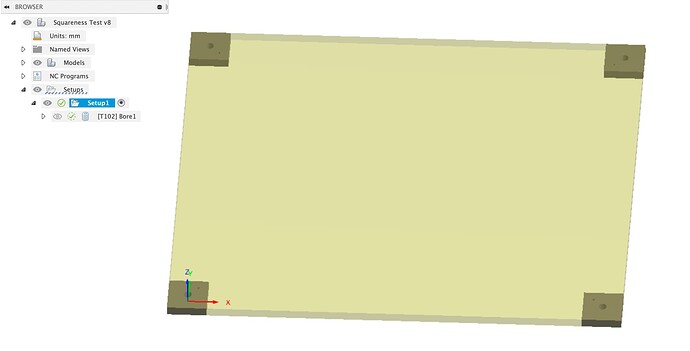 A simple boring toolpath with the 1/8th Inch cutter. 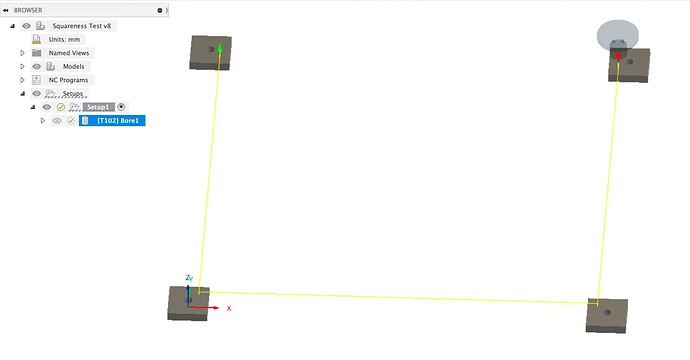 Once the toolpath is run, I use a selection of sticks (well handy length extrusions) and a digital caliper. Use a stick between the dowel pins, a bit shorter than the gap between the pins, use the caliper to measure the extra. You can measure left Y, right Y and both diagonals. If the left Y and right Y don’t match, check belt tensions, if they are close enough then check left and right diagonals, adjust to suit.

2. I have a couple of adjustable stops at the rear of the machine to push the gantry square during power up. This way the machine always starts in the same position.

Please post a pic of this at your convenience I’d love to see it.
Thanks

Getting my machine to cut square and keeping it square has been frustrating me for a while. Even when I spent ages squaring up the frame the cutting squareness seemed inconsistent. So I did what any CNC user would do, modded the machine to fix it

Tools required A Shapeoko Calipers A Stick (not calibrated) Optional - 3D printer, or you can use the Shapeoko The Problem(s) The first problem is that it’s pretty hard to get the frame of the Shapeoko really squar…