I’ve been daydreaming about getting a mini lathe to complement my shapeoko, and wondering if I could envision using the shapeoko to hold/move the cutter, while the mini-lathe would just spin the piece (i.e. , NOT managing a 4th axis, just leveraging the Y axis of the shapeoko to move the cutter along a given profile)

I have been re-reading various threads on this forum but found only this very short one that corresponds exactly to that scenario.

I have my eyes on this Proxxon mini-lathe: 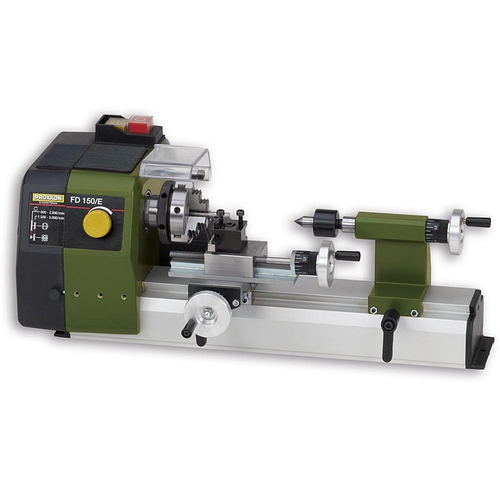 image.jpg920×920 89.7 KB
It’s short enough that it will fit inside the work aread of my standard SO3, and if the idea turns out to be bad, I could still use it as a regular manual mini lathe.

I would design some kind of fixture for the cutting tool, that would be attached to my spindle mount or something, so that the tool is “on the side” of the later, as it would be is used manually. So height/gantry clearance would not be an issue, but I wonder if I could come up with something rigid enough.

Has anyone done something similar ? I may have missed that thread.

LOL, that was a crazy idea I had for a minute. I ended up building a 5’x5’ ball screw machine and selling the shapeoko. Although my idea was to get an actual 4th axis, bolt it to the table, and spin it at a fixed speed so the shapeoko would not have to control it. Will that mini lathe fit under the shapeoko gantry?

Fun fact, I still don’t have a 4th axis on the new machine, can’t find the time. I’m still spending half a day per chair or table at the lathe. Someday I’ll get around to it.

Will that mini lathe fit under the shapeoko gantry?

No, it won’t, but I think that won’t be an issue if I mount the cutter laterally / at 90deg angle from the router axis

Have a look at Mirock’s YouTube channel. He recently published two videos where he used a lathe with his CNC and I think something similar should work with a Shapeoko too.

Have you ever looked at the roll around 4th axis DIY retrofits?

Rolling Around A 4th Axis

[Perry] was interested in adding a 4th axis to his CNC machine, but not very excited at the prospect of spending hundreds of dollars on the parts and electronics to make it work. There is a very cl…

Thanks! the first vid where he uses a static cutter is exactly what I’m after, and this gives me ideas about designing the tool holder and how/where to attach it to the router mount.
The second video where he uses the router itself as the cutting tool is interesting too but won’t work on the Shapeoko scenario (due to the height/Z clearance limitation)

Yep, thank you I’m aware of that possibility, but I don’t need a 4th axis, I “just” want a CNC lathe capability (for pure turning ops). Also, I doubt this approach would work for precision work / turning metal (I don’t know for sure, it’s just my feeling).

I really like the idea that I whenever I have a turning job to do, I would just put the mini-lathe on the shapeoko, secure it to the bed, install the cutter holder, and run the job. And when I’m done, remove the mini-lathe and go back to CNC milling mode, without having to disassemble a lot of mechanical pieces.

Depending on the diameter of what you want to turn, even the second option could work if you move your gantry all the way to the front where the router bit whil then be sticking out over the wasteboard and you might get a bit more clearance…

I don’t think it would work because the size of the mini lathe would move the center of the lathe maybe 6in in front of the Shapeoko which is beyond the reach.

@Julien Try this first. You could mount it to the SO3

Micro-lathe, great for dremel Also added a rail slider system to mount this to, idea is to screw the main part to a piece of wood, etc., and the slider piece moves in and out for mounting lathe pieces of varying lengths... This slider system is...

Interesting…I could indeed use something like this for a prototype.

either build from scratch or find an old lathe for the ways.
create a steady rest with a pulley and chuck on one end, live center on the opposing.
motor with a pulley and v belt. done.
nice because you really only need the ways to be solid, steady rests should repeat pretty well if taken down.

full lathe works but is bulky. trim the fat and have it easy to add and remove as necessary in various pieces for ease. could use a decent drill too, they got some torque to them.

A 5C spin fixture with tailstock is also an option.

So I did what one should usually not do: ignore @neilferreri’s advice, and proceed with my initial idea

(seriously though, the reason for not going to the Dremel-on-a-custom-jig option is that I want to learn turning small objects anyway, so I invested in something that would be a bit less awkward to use and hopefully more precise) 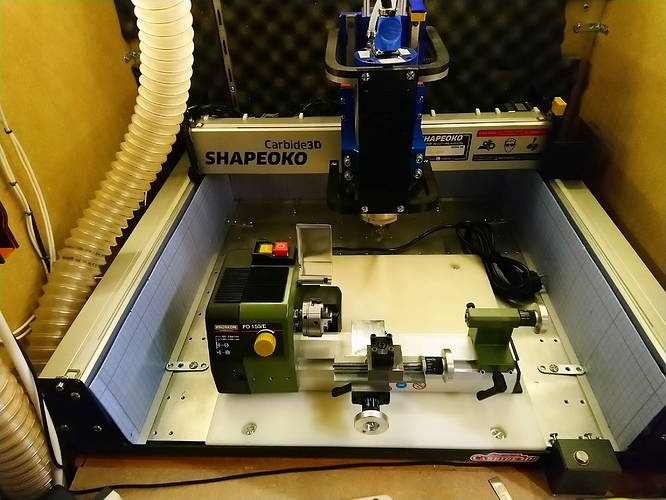 It’s like this mini-lathe and the SO3 were meant to work together.
I’ll update this thread as I progress towards my custom CNC lathe. And then I can rings to rule them all !

By the way, if anyone has advice on good resources/tutorials on turning, I’m all ears.

Here I am worried about running my Shapeoko into a clamp or two.

Are you planning on syncing the rotating axis with the CNC?

Are you planning on syncing the rotating axis with the CNC?

Nope, I don’t want to get into the “interesting” world of managing a 4th axis just yet, my intent is only to drive the tools in the X/Y plane, while the lathe is turning at constant RPM.

Nice little lathe, I wonder if the motor will have enough power for anything but the smallest and softest material. At the moment, if I wanted to implement a 4th axis, I would consider the roller Y axis method but I would have to find plans or do my own design with all the pitfalls. I never seriously considered implementing a 4th axis since the stock Z of the Shapeoko does not give much clearance but now with the HDZ, it is something I may try at some point.

Would be interesting to do like I do with my laser, disconnect my Y axis and use it to turn the rotary. You would still have the x and the z. (which is what you normally use with 4th axis.) the Y would be center line of the lathe. The only issue is how to control the Y functioning as the rotary. Software allows you to change the steps and the diameter.