If any one is good with editing vector graphics I would appreciate some help. I’m using a freely available .jpg off the web and I am not doing this for any type of commercial purposes, so I’m not making any money off your effort.

I can convert the USN_Diver file into a .SVG using Inkscape but I’m not happy with how it comes out. I’ve attached my .SVG and if you take a look at it compared to the original, you can see that the ropes on the collar get all jumbled up. I’m not trying to retain a fine amount of detail, as the carved image will be a little less than 2.5 inches high using a .050 30 deg bit. Some details will just be too small to show up, I get that, but I would like it to be as relatively nice as possible. So for example, I don’t need all the small threads on the ropes to show up, but the general shape of two ropes would be good.

The .SVG doesn’t even look terrible until I import it to CAD/CAM. Then the dark areas get converted to blobs which is fine except for the ropes and the port to the lower left of the face mask grate. Here’s what it looks like when simulated in Fusion 360, you can see some of the issues with the ropes. The seahorses and general helmet don’t look too bad though. 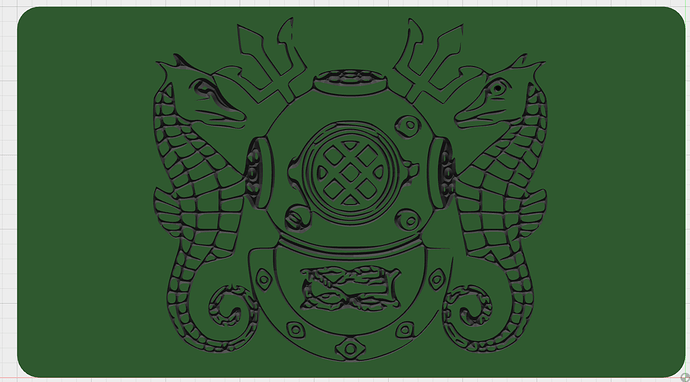 Hang on, looking to re-draw this now.

No rush, you are doing me a favor. And I appreciate the help.

Here. You’ll need to select the balance of the parts and assign toolpaths to them:

Thank you very much! Holy cow Will, Did you draw that by hand in Carbide Create? I was looking for a .SVG file (no I’m not complaining about the help); I expected someone would draw it in a more user-friendly environment, like some kind of graphics software. I can’t believe you did that in CC…a testament to the software in the hands of a skilled user. And within an hour…no way I would have been able to pull that off. I will run a test carve or two to make sure I’m happy with the scale and allignment, but hopefully will have something to show for the effort later. I’m waiting on some poly to dry on the pieces I am using this for first. Going to then carve this in, use a little black paint to highlight it, sand off excess paint, and then Poly coat it again.

Didn’t draw it in Carbide Create — I draw pretty much everything in Macromedia Freehand.

Yeah, I was going to carve it in Fusion, but Fusion has one big flaw when it comes to carving .SVGs: When you build the toolpath, you can’t drag - select all the vectors at once. You have to go in an click them all individually. Will see how CC does. It may actually be better for this type of carving.

Okay @WillAdams, in CC how do you get it to carve the in between the everything so that it comes out like my Fusion picture above? When I try to go in and create my own V-Toolpaths, it wants to carve the reverse of the areas I want. So I want the lines in between the Sea Horse scales, not the scales themselves. I’m not sure this is going to work for me.

Then click on the first bit of geometry, control-click on any remaining, then assign a V-carve toolpath. Repeat as necessary.

Ah, I see now. I defined my own tool already before you suggested it, but this is just as painful as Fusion. I still have to go in and click on every individual vector. I will keep you posted once I get it carved. May be a week or so though. I’ve got a different wood working project in the form of re finishing a table top this week.

You wouldn’t have an .svg of this since you did it in Macromedia would you?

Edit: I’m starting to get it, but it seems like no matter what I do, I can’t get it to carve inside the pupil of the eyes or in the inner concentric rings on the face mask. Sort of frustrating. Will see if I can put up a screen shot. 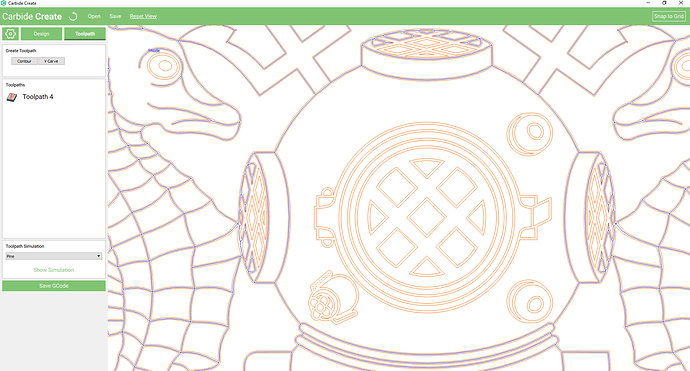 You have to select individual pairs of paths, or in the case of the sea horse eyes, just the eyes.

This version doesn’t preview well, but should cut okay:

Ah, I see now. You had to create 48 toolpaths to make it work. Is this some flaw or just a limitation of CC that you cannot select all vectors in one toolpath?

I have the pieces that I want to carve this into drying with some polyurethane on them. Hopefully, after another coat or two, I can try this carve. Unfortunately, my SO3 workspace is also the area where I do my finishing, so I don’t want to put any dust in the air from carving right now. Once I get 2-3 coats of poly on and if the test carves go well, I should be able to carve this and paint it.

Thanks for all the help and your patience @WillAdams. My friend was a Navy diving officer, and this will make a nice gift for him I think.

It’s a limit of Carbide Create — other apps aren’t so limited — on the bright side, it does allow one the chance to choose toolpath order optimally.

That said, lots of folks choose to purchase Vectric Vcarve for this sort of thing.

Yeah I’m planning on buying Vcarve but making do with Fusion for now, except in this case where you are forcing me to use CC…not sure what I did to piss you off Will. I’m kidding, I’m fine with CC, its just not my personal preference for doing CAD/CAM. I’m finishing up some poly on the parts this will go on, and hopefully can carve and paint it by the weekend.

Related to Fusion 360 requiring that you have to select each path, I like this “feature.” When I’m doing a trace in plywood, there are often cuts that aren’t deep enough because of the inconsistent thickness of plywood. So I can go back into F360 and just pick the paths I want and create a job just for them a little deeper. But it would be nice if it could do both.

Well @WillAdams, it worked pretty well once I worked through the challenges of Carbide Create. Thanks again for the help, even if you wanted to torture me by making me use CC. Picture below. I think I found a bug in Carbide Create. More on that in the last paragraph. But first, when I tried to run the last file you uploaded Will, it was creeping along at less than 2 IPM plunge rate. For a carving like this, that meant it was like watching paint dry. For the same bit in G-Wizard, I know I can run it at 23 / 12 IPM. I modified the F values in the G-code (my first time directly editing code, so a new skill) to be around 20 IPM for Plunge, and it was faster, but took forever in the test piece because it had 36000 lines of code.

I deleted all the toolpaths and started them again by hand. I figured out that many of the vectors were being cut over and over again, as they had the same ones in multiple toolpaths. I got this down to about 10 toolpaths and had all the geometry included. In the pic below, you can see it turned out well with lots of detail for the small size. I’m thinking about painting it gold, giving it a sanding to get rid of excess, and then one more clear poly coat and it should be done.

The Bug: I’m using v303 of CC and I found out that in this design, anywhere that there are concentric rings, CC will only cut the outer ring, and none of the inner ones, regardless of which ones are selected. For example, the area around the facemask. If I select the outer ring, I cannot get a toolpath to run on the inner concentric ring. The same thing with the eyes / pupils of the seahorses, and the bolts on the collar. They have to be separate toolpaths. Not sure why that would be the case, but it is. Where should I report this as a bug?

Very lightly carved into the polyurethane coating with a .050" 30-deg V bit. 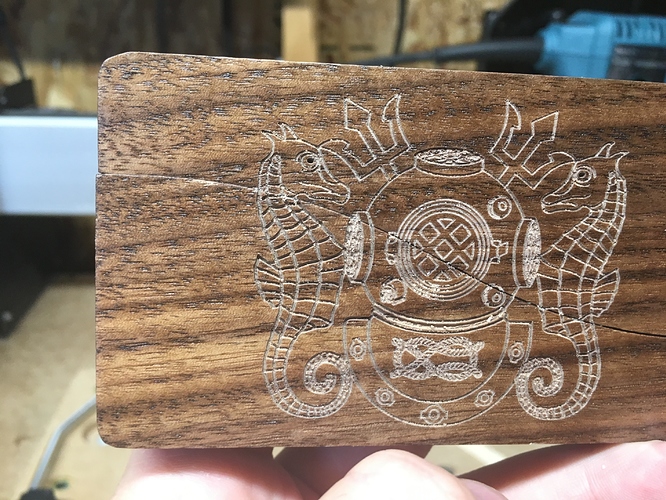