If so it suggests over-tight belts, or incorrect steps per unit distance setting in GRBL $$ setup

This is a Nomad so that shouldn’t be a problem. The Nomad uses lead screws rather than belts. The steps per unit distance should be fine unless the pitch of the lead screw is out of spec (which I haven’t heard of).

@Brotron it might be interesting to change one of the squares to 30mm though and see if the error does keep scaling.

it might be interesting to change one of the squares to 30mm though and see if the error does keep scaling.

Good Idea, I can live with the under .005 slop if it remains consistent and I can compensate a bit with tool size but a scaling error would be bad.

Usual preface, I’m with PreciseBits so while I try to only post general information take everything I say with the understanding that I have a bias.

Extra preface. I’m not nearly caffeinated enough yet… So I may miss expanding on some things, ramble more, etc. Not to mention what it’s going to do to my grammar and spelling.

On that last point by the way, if you’re after accuracy, you usually want to avoid endmills with a cutting diameter that matches the shank diameter. One of the guys from PreciseBits elaborated on that a bit here.

Anyhow, those are ways to get an endmill with a known diameter. If you still get weird results, it’s probably not the endmill.

To expand on one point not covered in that linked post, you extra can’t measure the true size of a single flute cutter mechanically. The opposite side of the cutting tool from the edge of the tool has to be ground away so that it doesn’t rub in the cut slot. How much is ground away depends on the design, intended chiploads, and balance specs. The only way to measure a single flute tool is to get the “swept diameter” using something like a tool makers scope or optical measurement tools that can track total maximum width of the cutter through a complete rotation.

If you are trying to narrow down where you might have issues, you can at least narrow down deflection using the following test. Cut 2 lines, with a gap between them in each axis, cutting in opposite directions. 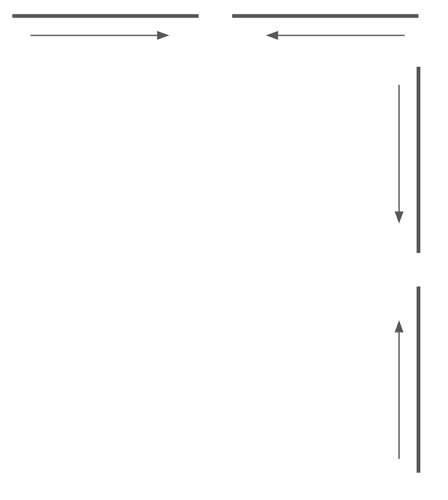 Then measure the delta of the edge of the pair of lines and divide by 2. This is the deflection of that axis. This number will change with the material, feed, tool diameter, and plunge depth.

Length of the gap doesn’t really matter. The line lengths need to be long enough to let the tool get to speed after acceleration and before slowing to end the cut.

The upside to this is that it will give you deflection data without having to know your runout, or exact tool diameter. Both runout and diameter can effect the cut as they change the forces of the cut and chip formation. However, the delta of the cut edges is the raw deflection for those forces.

The obvious downside to this is that it only measures slotting force deflection. In theory it might be possible to get non-slotting numbers by offsetting a second line using numbers from both edges. However, I haven’t had nearly enough coffee yet to trust myself figuring that out (or if it’s even true). The issue is that you would need to put the offset on opposite sides of the cut (which ones depending on if you are climb or conventional milling).

Potentially simpler way to get a pocketing number would be to calculate your MRR for your pocketing operation, then adjust your plunge depth of the test to match. Won’t be perfect but should get you close.

Great info “caffeinated or not”, this seems like a good way to assess and dial in my deflection compensation for aluminum before programing the cut… Maybe if I ran this parallel to line scribed with the diamond bit it would be easier to measure?

I honestly don’t know. The primary thing that would concern me with it is that I have no good knowledge of how true a scribed line would be. In theory I’d think that assuming a uniform tip shape the deflection would be in the direction we don’t care about. However, if the issue with your spindle is bearing related, and not knowing the forces involved, I’m not sure that I would trust it personally.

One cheater way of measuring it would be to scan it at high resolution on a flatbed scanner. You can then load it into an image editing program and after aligning the angle, add a rule, count the pixels and convert it. Don’t ask me why I know this…

Thinking more about a way to measure a less than full width cut without the runout or tool diameter I think I might have something. Still won’t be perfect but should be closer than straight MRR matching depending on the stepover. Going to let my brain mull it over a bit before my fingers get me in trouble though.

The other issue is that the tool helix will also effect this and that effect could change depending on the cutting depth and helix of the cutter.

***Self edited for overly harsh statement about popups and marketing. 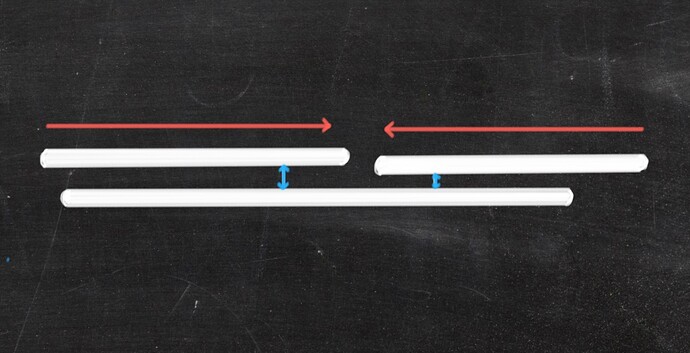 So maybe not the scribe, but if I just cut a line below the other two, can we pretty much consider that a parallel stroke? I know there are going to be un-line like micro details, but it’s going to be a lot closer than me putting a ruler underneath them, and it gives me something to grab with the lower jaws of the calipers. I mean at some point I am going to have to use the machine to calibrate the machine and there will always be slop by the very nature of having a tolerance in the first place.

Sorry, weekend got away from me.

That should work fine as long as you don’t use the ends of the lower cut. It may not be “center” to anything but it will be “true” relative to the other cuts after acceleration.

That looks like a lot of deflection. I’m assuming that’s the 1/8" cutter you were talking about using and in plastic?

I’ll try to post back later today with the test for less than full width. Mondays are crazy here…

That was just an exaggerated illustration, not an actual cut. I certainly hope the cut looks better:)

Well, more evidence that when I state I’ll try to get something done timely I will collapse the waveform the other way… Sorry for the delay.

That was just an exaggerated illustration, not an actual cut. I certainly hope the cut looks better:)

That makes more sense. Haven’t seen deflection like that since the CNC that shall not be named…

So here the test I came up with: 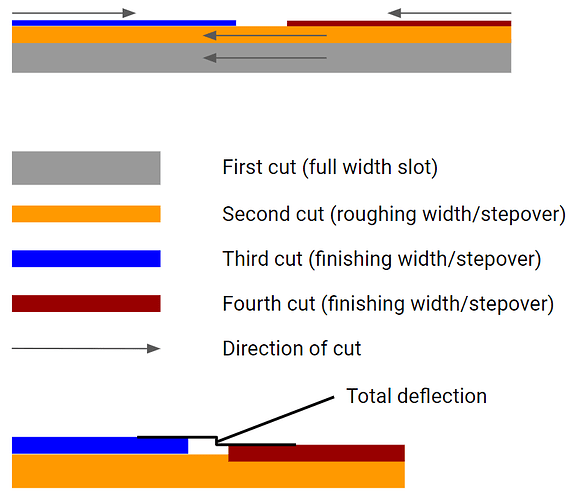 The deflection number here is total not doubled and does have a slight error in that it’s adding the climb side deflection to the total. However, that should be minor depending on the width and is the less significant deflection force. Additionally, it will give a truer number for what most people will actually care about which it the actual deflection for dimensional accuracy.

This would test for climb roughing and conventional finishing. If you are running the opposite reverse the cut directions.

And yes, there is also a slight error added to the second cut as the full width cut will deflect changing the width of the second. However, this it true for EVERY additional cut and at some point you have to draw a line.