There comes a time in a man life where he has to decide if 70W and 10,000 RPM is enough. On an engineering basis, 70 watts probably makes sense for a desktop machine and is totally fine for majority of users. Let’s be honest, for beginners, a spindle that stalls is a really good thing. Continuing to be honest, I am not a beginner and I am also an idiot so here we are…

I’ve been going down the rabbit hole modifying my Nomad and this seemed like the next step to incrementally turning my machine into a DMG Mori competitor. I did a lot of pondering architecture; the current carriage design doesn’t lend itself well to aftermarket modifications in current configuration. (And I really didn’t want cut a hole in the top of the machine.) Inverting the motor, running it in reverse and attaching the mount to the underside of the existing carriage ended up the best path; it’s stiff bolt on modifcation and allows you to close the stock door! NEMA 23 brushless motor traded pretty well on square size, length trade was driven by the motor not interfering with wrenches during a tool change. The motor has a 3,000 RPM maximum but was able to slap a larger pulley on there with the new packaging so will be able to hit 12,000RPM on my Nomad…for at least a while before my drive belt explodes or the spindle bearings melt. Even when it’s not running at hooligan speeds, I will have over twice the torque so I am hopeful drilling aluminum will become a thing. (Keen eyed users will notice I am already running an ER16 collet, I won’t stop until I can run 3/8" shank insert mills on my Nomad!)

I designed the part up in Fusion 360 and cut it on the Nomad. I wanted to avoid tapping aluminum at all cost and wrenches are clearly for barbarians so I designed the nut torque features into the plate. Ran the 1/8" single flute for most of it, aside from the M3 clearance holes that I ran with a .039" 2 flute end mill. 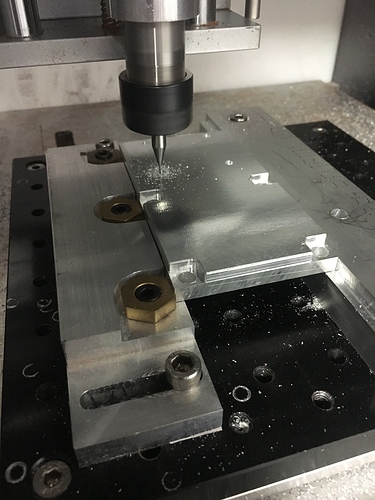 Nomad is hilariously accurate and I was really pleased with the fitup, always nice when a plan comes together. 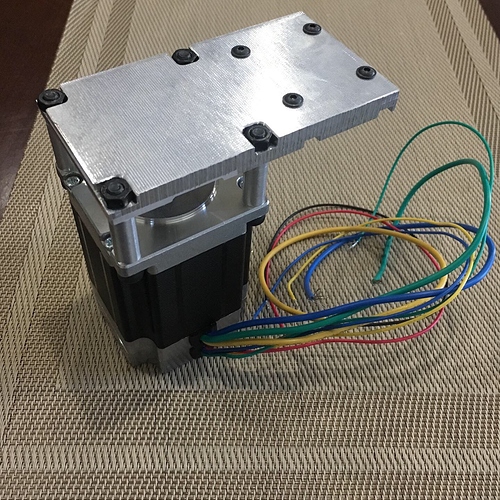 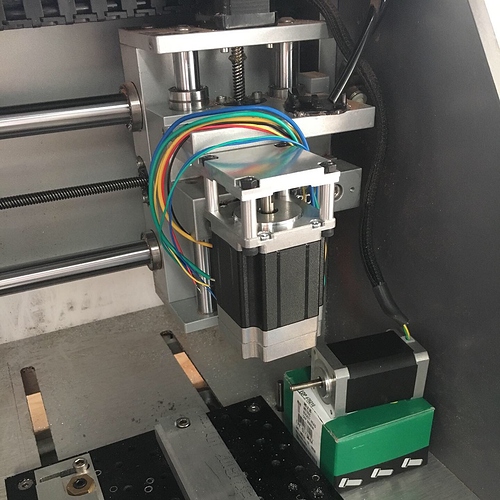 Pulley arrives in ~2-3 weeks. Still need to size and order the drive belt. I can do basic prove outs with benchtop power supply but ultimately will get this to integrate with a plug and play Nomad expansion PCB I’ve been designing with a bunch of extra features I’ve wanted.

Awesome! New motor driver in the cards I presume?

Yessir! Trying my hardest to make it plug and play! Been working on the design a couple evenings now. It’s been a little challenging since I need to treat the current control board like a blackbox but I think I’ve been able to piece together enough about how it works to do what I need to do.

Is it a stepper or a BLDC motor? Which one? Do you have performance info for it (speed/torque curves, etc.)?

Following. I’d love to get more details on the pulley you’re using.

Following to see how this turns out. I’ve been going down a similar avenue but slightly different approach. I have a 150 watt BLDC motor and the driver for it. Now just waiting on a new carbide motion control board because mine is flaking out. It’s an old V2.2 board with known issues. Hope Carbide can get it shipped out tomorrow.

Sorry for the delays everyone! Busy week.

I am using a stepper as my spindle so I can synchronize the spindle with the z axis for rigid taping.
…
…
…
KIDDING!

Definitely using a brushless motor here; despite being a glutton of engineering punishment, even I wouldn’t use a stepper motor on a spindle!

Agreed mount is unconventional and could result in forces on the carriage outside the design loads. Alternatively, more mass could dampen vibrations. Planning to test in production.

Pulley is 2" OD vs ~1.25" OD on the stock Nomad, hence 12krpm on the cutting tool. I just barely get away with this size pulley on my motor mount packaging. Stock machine runs a 2GT pulley/belt so I stuck with integrating with that. Pulley arrived tonight, just need the belt and I’ll be in business! Stretch goal to bench test the new motor and drive with Nomad control this weekend.

Regarding PCB integration, have slept on it a lot and I think I have a clever seeming way to do it, it’s just literally a matter of time now in the day to be able to flush out the design!

@TonyDangerCoiro Did you consider using a COTS motor controller in torque control mode since machine forces are proportional to endmill torque?

Oh, yes, I do plan to use a COTS controller! I know how challenging designing a motor controller would be, even if you start with a dev kit, it would still be more work and money to create a probably less good result than using a proper ‘mass production’ COTS controller. All the PCB related expansion stuff is to work around my perceived limitations of the existing control board power and interface more easily with the COTS controller and Carbide control board. I’ll also add in a couple hilarious features you find on proper VMCs.

Neat! I own an old Nomad with belts on the X axis. I won’t do that… but I was considering upgrading my machine. All options are open.

Can’t wait to see what this spindle will be capable of on the nomad design.

You should look at some of the aluminum projects that @Vince.Fab and others have done with their Nomads.

I have milled aluminium (not as pretty or crazy as @Vince.Fab) but the spindle gets so hot. And it takes ages.

I might still give a radiator a chance but I really feel uncomfortable. This takes the machine to crazy limits.

It’s alive! Powering and controlling via the machine and Carbide Motion, check out the video showing it throttling through the spindle RPM range.

Looking forward to the progress!

I’m curious how the spindle will manage.
Is there much safety factor in the stock configuration that can handle this additional motor.
I’d presume you could swap out higher grade (rpm) bearings such as ceramic, but concern is also with runout in such an effort.

Thanks for paving the way @TonyDangerCoiro. I know @mikep went through a similar effort, but not with such a significant motor.

The machine itself is pretty robust, and although there have been some issues with the spindles, they seem pretty isolated.