Alternative milling spindles for the Nomad

I thought I’d spin off the discussion about spindles from Vince’s thread to a new one, to keep things clean.

Basically, if we want to upgrade the Nomad’s spindle, what should we do?

The options I know of so far are (in rough order from easiest to hardest):

Also adding @LiamN since you were on the other thread.

On the other thread, I also said I wanted to look at actual products. The main things I’m thinking about are:

In my experience using the VESC and realtime tracking the cut current, imo 500 watts is the minimum you should go for. Also a good sweet spot for max rpm seems to be around 20,000. This lets you use the advantages of higher sfm but isn’t too high that the Nomad feed speeds can’t keep up. Also using an aircooled spindle means you get free airblast but heat WILL build up in a closed space.

Keep in mind that once you have more spindle power, the Anti-backlash lead nuts are easily overwhelmed and will introduce play in the motion system. The new Nomad 3 has a different style nut so it might be worthwhile looking into a retrofit.

If you want to mod a little - ide say go for bigger bldc spindle motor, at least a couple hundred watts. Er16 spindle would be a good upgrade but you’ll want >200 watts to run it. Pros - everything fits in the stock enclosure.

If you aren’t afraid - full Z replacement and spindle based on your rpm and sound requirements. A 65mm watercooled 0.8kw spindle would probably be perfect however the gift height would require cutting or modifying the enclosure top.

Also using an aircooled spindle means you get free airblast but heat WILL build up in a closed space.

This is something that worries me. Since I want quiet, I have an enclosed box that my Nomad runs in. With the tiny 70W stock spindle this isn’t a problem, it just gets a bit warm after a couple of hours. With a spindle running in the hundreds of Watts, I can see it being a much bigger issue, so I’ll need to pump air in and out, which means letting noise in and out.

Keep in mind that once you have more spindle power, the Anti-backlash lead nuts are easily overwhelmed and will introduce play in the motion system.

Is it possible to tune them or is the only option really to replace them?

I have been thinking about replacing some stuff with ballscrews and linear rails, which should fix this.

The new Nomad 3 has a different style nut so it might be worthwhile looking into a retrofit.

From what we’ve heard so far, that’s not going to be possible, right?

Er16 spindle would be a good upgrade but you’ll want >200 watts to run it.

I actually have an ER16 collet holder for the stock spindle, I just can’t get it to fit for some reason…

A 65mm watercooled 0.8kw spindle would probably be perfect

Do you happen to have any idea how loud such a spindle would be?

Also, I have a theory that I realize I haven’t confirmed at all yet: if I make the same cuts on a 0.07kW spindle and an 800W spindle, will the 800W spindle be quieter?

My theory was that if I underuse an overpowered spindle, I’d get quieter cuts but I’m not sure whether that’s actually true or not. If it’s not true, then maybe a less powerful spindle is what I really want.

Hey, I can actually buy that, it’s a German company

I also emailed a local retailer and they recommended this but replacing the fan with a stock electric fan. It does seem more appropriately sized for the Nomad and it was suggested that it should be pretty quiet and inexpensive.

I think you’d be better off with an Electrospindle rather a HF-Motor “Please note that HF motors are much cheaper than the electric spindles in terms of price, but there is a big difference. The HF motors have a maximum speed of 18000 rpm. Furthermore, the design is designed for predominantly radial loads. You should purchase an electrospindle for drilling.”
Unfortunately, their Electrospindles are bigger and more suited to Shapeoko use than Nomad. Unlike Sorotec, damen CNC will ship to the US and seemed to have lower prices.

A 65mm watercooled 0.8kw spindle would probably be perfect

Perfect for Shapeokos, overkill for Nomads. If you’re mostly cutting wood and plastics, you could save money and might be satisfied with a G-Penny spindle like this one. Shapeoko users seem happy with them.

I’m not intending to put a lot of axial load on it so I think it’d be fine, it’s just be some light load as I helix in.

Damen CNC isn’t even close to competitive with Sorotec. The base prices are the same but the shipping for a spindle costs double (40€) and they charge 15-19.5€ in payment fees.

Even if you’re in the US, I’m sure there are better options.

Oh and missed the last bit:

Perfect for Shapeokos, overkill for Nomads. If you’re mostly cutting wood and plastics

How is it overkill for Nomads? Vince seems to be working with ~500W so 800W doesn’t seem like a huge jump.

Where did you see that?

Still, going by that, 800W seems on the low end of what the Nomad can handle. 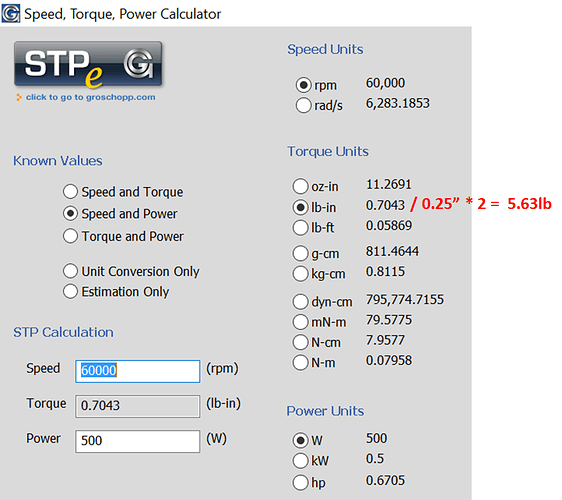 image770×684 146 KB
If I remember correctly, he said that his modified Nomad “likes” 3lb cutting force, and he seems to be setting 10lb as the maximum machine force in SFPF workbook. So here’s what powers are required at the recommended 20,000 RPM. 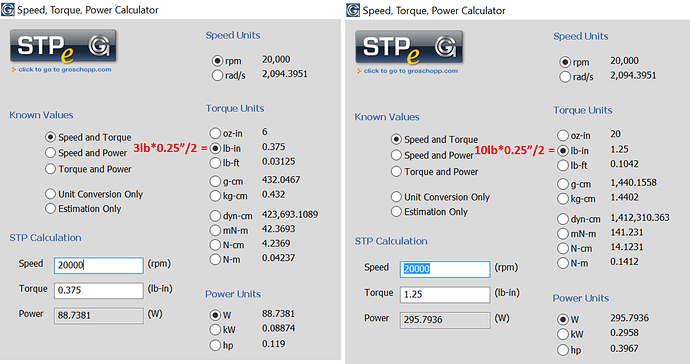 0.8kw seem to be the smallest inexpensive watercooled spindle, the next step is a 0.3kw 60,000 which can’t have much tq.

With load spikes as the cutter enters the workpiece Ide much rather have an excess of spindle power. But as your numbers show, 1.5kw is a little excessive

Looks about perfect to me - based on your 3lb cutting force for (modified?) Nomads! Does it have an ER11 collet? Which one is it? Have you used one at 60,000 RPM? 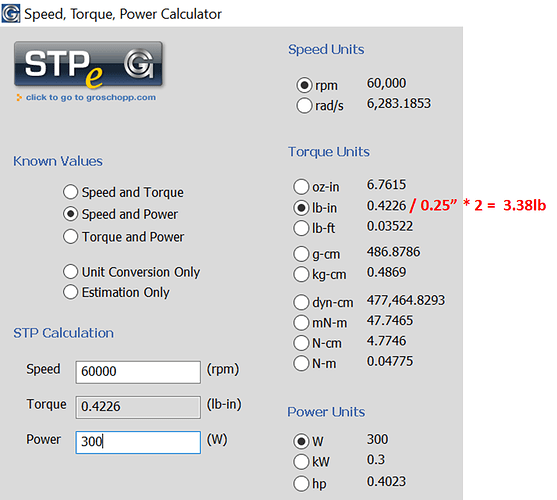 I’m not intending to put a lot of axial load on it so I think it’d be fine, it’s just be some light load as I helix in.

There will be axial loads whenever you’re not side milling with straight endmills.

550W, looks like it has dimensions similar to the Nomad’s spindle and 5-80k RPM. They do have plenty of others as well. 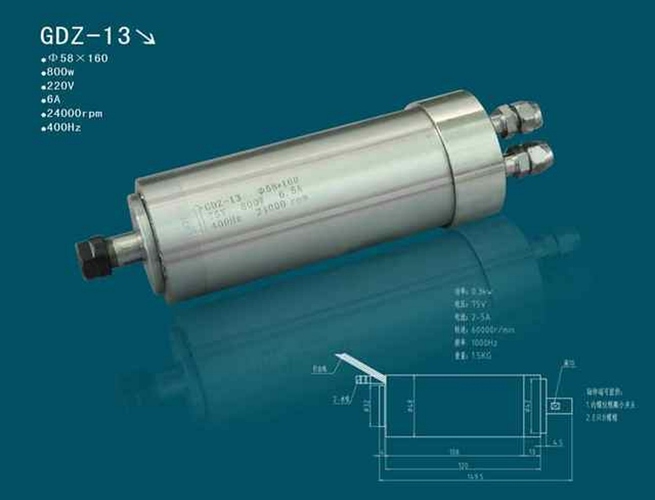 I thought it was a 24k but turns out the photo is wrong. 60krpm. The size puts it very close the the Makita. 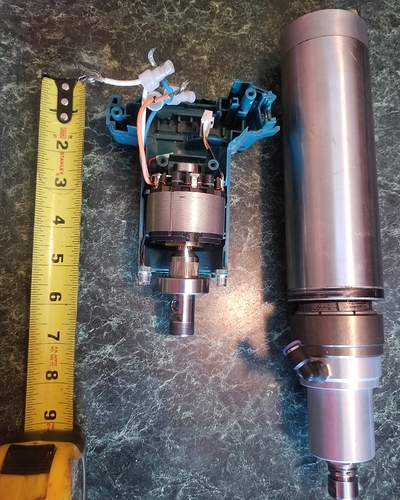 550W, looks like it has dimensions similar to the Nomad’s spindle and 5-80k RPM. They do have plenty of others as well.

Awesome - they even provide meaningful and reasonable performance data (unlike the Chinese). IMO they’d be perfect for both Nomads and Shapeokos, but you’d need to get endmills rated for those speeds, and they’re probably really expensive. Do they sell the VFDs too?

You could build a water cooling jacket to get the heat out of your quieted enclosure.

I emailed the Jäger guys and I’ll see if I can get an idea of the price of that spindle. IBAG also has some interesting options so I emailed them too.

I did an upgrade to a 70w BLDC motor, tutorial and results here: Nomad spindle motor....upgrade?

Honestly it wasn’t worth the trouble.

Vince’s mod was for a shapeoko, not a nomad. There would be some pretty significant changes required to get a router to fit and be usable. Likely you’re building a whole new machine at that point.

An AC spindle like the ones you show it simply not going to fit without even larger changes, and frankly at that point you are basically building a whole new machine. I’ve found that since I’ve gotten my SO3 and gotten it tuned and squared well, I rarely use my nomad. My nomad is a little accurate (screws vs belts), but not enough to be impactful for most of my projects.