Currently, my air blast setup consists of this cheap mister: 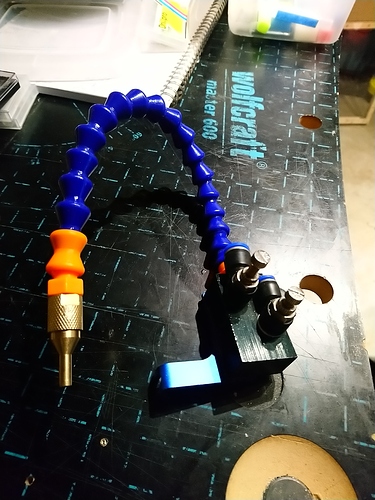 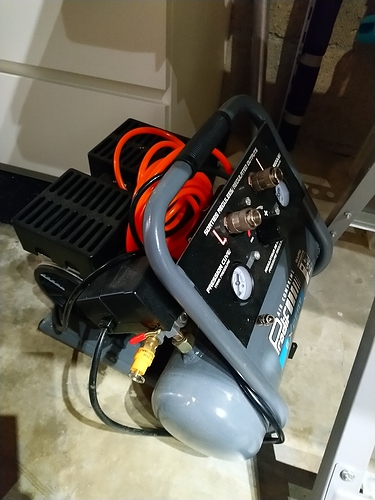 It works fine, but I run a lot of jobs late at night, and the compressor is not near quiet enough, and is on all the time, I can’t take it anymore.

I have read a number of threads here, that all seem to circle back to “buy a silent air compressor”. Either the one I have is louder than its spec says (can’t remember exactly, something near 67dB), or this is just too loud for me, anyway I would like some advice as to whether there is any HOPE to build a decent air blast setup with one of those aquarium pumps, that MAY be much quieter if I choose it carefully. Some are rated around 60l/min i.e. 2CFM, there is rarely any indication about pressure. It seems to me that this should produce enough air flow for decent chip clearing given the right nozzle ?. The mister is probably part of the problem, the (very common) one I have is probably designed to work with a lot more pressure (from a shop compressor), but what about using larger nozzle ?

The obvious response for the compressor noise is to put it inside an enclosure (cabinet or something), you should see a 6dB difference, probably more if you insulate but you need to add air entry vents to cool it and provide adequate air supply. By placing the intake toward a wall or above the floor, maybe using a tube to bring air directly to the intake you will minimize sound escaping the enclosure but if it runs continuously, you may have heat buildup that you will need to deal with.

Yep, I tried that but it did not help enough to my taste, and indeed the heat build-up was an issue. I also have this feeling that running a full-blown air compressor just for clearing a few chips is overkill, and a 50W aquarium pump should be able to do the job, but then again even though the idea seems to come up regularly, nobody seems to be using that solution in the end ?

If you aren’t trying to add any liquid feed into your mister, a powerful aquarium pump should be fine. Otherwise, it won’t generate enough pressure to mist any liquid.

Have you considered an air brush compressor… I have one. they are cheap and very quiet and only comes on when needed … especially if it has a reasonable size tank… there are many available on amazon e,G 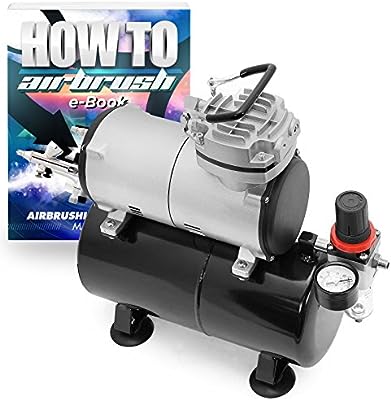 An aquarium pump would certainly be much quieter than a compressor, it is also smaller and I don’t know that you need 50W to actually generate enough air.

Winston @wmoy installed an aquarium pump but did not detail his setup. I’m sure others have too and maybe it would be interesting to see how they have installed them, what size and provide info on how well these work.

I did consider that option, but I remember a thread here somewhere mentioning that it was not working (or not going to work) very well.

@The_real_janderson is onto something: I should probably give up on the mist side of things, and focus on a simple air blast. This is what I have been using anyway 90% of the time, now that I think about it. An air blast and a few drops of WD40 now and then is probably enough for my usecases

So for an air-blast, probably this kind of air brush compressors would be interesting too, I’ll need to dig into that.

@luc.onthego I would indeed be quite interested if anyone who uses such a setup can provide details here

I’ve been using this pump for awhile: https://amzn.to/2mGQE1F
It’s a 950 GPH model. I used to use something around 750 GPH, and that was just barely considered acceptable IMO. Anything marketed as an “aquarium pump” is too weak, you can do the conversion from L/min or whatever they use to compare specs, but they are way underpowered for our use case. I think a little north of 1000 GPH would be ideal.

The thing with these air pumps is that it’s low pressure, if you put a nozzle on it, you severly restrict the flow. I just take the nozzle off my flexible coolant hose and just aim that directly at the cut. You can feel the difference in momentum just by putting your hand in front of the stream. Still not as powerful as what you’d get off a proper compressor, but also much lower power requirements.

This setup works fine for hobby machines at hobby settings IMO, but if you’re Vince you would really benefit from coolant, even if it’s only mist. Aggressive cuts put a lot of heat into chips and your part, low pressure airblast is okay for chip evacuation but won’t keep up with the thermals.

Thanks! exactly the kind of steer I needed, and knowing about that ~1000GPH threshold will help while shopping. For my non-Vince aluminium jobs, that should work fine.
How quiet is it in reality ? (the “<60dB” is a good indication but sometimes…reality begs to differ)

I agree with Winston. I use the aquarium pump as above for my laser’s air assist. It works fine for that, puts out all flareups before they start with my 80watt laser. But it ain’t a chip removal compressor. And it isn’t nearly as quiet as you would think. The new harbor freight or California air type compressors are quieter.

But I’d spring for the Harbor freight air brush compressor. They are almost silent. And cheap

But I’d spring for the Harbor freight air brush compressor. They are almost silent. And cheap

Right, but they also seem to be in the 1 CFM ballpark, which is much lower that @wmoy’s 1000GPH mark?

No, the aquarium pump has really no pressure. You can’t pump up a tank with even 10 psi. Just wont do it. The actual air brush compressor will fill a tank…

My California air tools compressor is about the same volume as the air pump. Comparable to loud refrigerator, easy to ignore with headphones.

You can use focus high pressure air to a very specific area with a nozzle and use fewer CF, but it will still cycle the compressor pretty frequently. CAT doesn’t rate their consumer stuff for a very impressive duty cycle. The hydroponic pumps are supposed to be used 24/7. Some people run their compressors like they stole it and it survives impressively long, other people kill it within a few months. Kind of luck of the draw.

I’ll pile on here. My original plan was to use a portable tank compressor but after testing I could see I would be basically running on compressor almost constantly and the tank was pretty much good for a couple minutes by itself. Given my compressor sounds as loud as standing next to a unmuffled 300hp CAT generator that was not much of an option. I also invested in a 50W aquarium pump (at the price worth a shot in the dark) and while it ‘works’ I am not about to say its the solution I would choose given another option. Its all about the pressure - it just doesn’t build that much. The airbrush compressors do look interesting but at the price point I think I will wait until I absolutely need one and convinced it would work better.

One thing I’ve noticed on my Chinese aquarium pump is that if I run it for a 30 minute job, it gets pretty dang hot. I know with the cnc you can have hours long runs, be careful with it and watch for overheating.

I also have the smaller version (actually what came with my CO2 laser). They deliver very little pressure, maybe 5psi? I found that by using loc-line with a small 1/8” nozzle, then adding and additional 1/8” piece of copper tubing glued into the nozzle to really get the air where I wanted it, I could get acceptable directed air. I only ever used that exact setup on my XXL with the JTech laser, but it would probably work ok for chip clearing too. I started by using a 26 gallon shop compressor, but it ran so often it was annoying. These little pumps are fairly quiet, but not real power houses. Definitely more quiet than shop air. Mine gets hot too, but I’ve run it for several hours at a time and it was ok.

Remember Julien is in France and some of the options above are not available due to the fact they are 110VAC and shipping from the US can be cost prohibitive. If the California Air Tools are available in France then I would recommend them. They advertise the quietest compressors.

@gdon_2003 is exactly right, I would probably go for a CAT if I could buy one locally at a reasonable price, but it does not seem to be the case.

Allright, so based on your feedback (thanks everybody!) my conclusion is that an aquarium pump above 1000GPH is worth trying but will need a different/custom nozzle that lets more air through, since pressure will be very very limited. The fact that they are intended to run 24/7 is a plus. I would still need to pick a quiet one, some of the Amazon comments are scary (well I would probably pick one, test it, return it if too loud, rinse and repeat)

If it does not turn out to be good enough for chip clearing, at least I will still be able to use it as an air assist for my laser, since I needed to address that also anyway.

The air brush compressor option…I don’t really know from the discussion above what I could expect, and no one seems to actually use one (unless I missed a comment), so this tells me it’s probably not a great idea.

I wonder how loud a automotive ac compressor run with 5hp brushless would be. It would need a small intake oiler but they should be able to put out 300ish psi. There’s even already motor driven units if you can figure out the power input.

Imagine if you could buy a rotary screw compressor and run it with brushless.

Having enough system pressure to pressurize your coolant reservoir will drastically reduce air consumption because you won’t have to deal with creating suction.

Vince may be on to something. Another option would be to run the compressor from a fridge, it runs on AC current, it is quiet, made to last, not too powerful but could probably deliver enough air for the job at hand.