Lies, incomplete data, and unenforcable demands have been fixed.

5 Likes
What are the exact locations of the table holes?
Nomad 883 threaded table and clamps
Milling Vise Recommendations?
Larger waste board in Nomad - plans?
Inaccurate distances
Saunders Extended Fixture Plate for Nomad2/3
Nomad base, under the table
kjl July 13, 2015, 6:46pm #22

A ha ha thanks - perfect

Well that settles it. Hahahaha. Thanks Rob. All mysteries solved. Now to find out if the Nomad is up to the job. Been studying another mod for my Nomad too. Will post a proof of concept and will share as soon as I get it working. It’s a way to zero X & Y with a USB microscope. Saw it on the Web and working on adapting it to our units. Love all this tinkering!!!

Except for the title block box not being nealy large enough, I think the true dimension callout is “DIMENSIONS IN INCHES, BUT EXPRESSED IN SOFT METRIC”

@robgrz, thank you so much for the pdf with dimensions. Mine was close but not accurate. This paves the way for anyone to customize their bed any way they want or add custom attachments. I, for one, are having a blast thinking of ways to make mine my own. Again, I’m sure I speak for many…thank you.

I don’t get why people want to change the bed, unless it’s to get some t-slots and that seems like you’d lose a lot of of Z height. And I would think the original picture in the thread would not only be flexible in using but flex under much pressure. But what do I know know…

@Randy - The correct callout is “DRAWN BY AN EE, USE AT OWN RISK”

@patofoto - Glad it helps. This was always something we wanted people to do. If we have time, we’ll probably make a batch of something different too.

@garyinco - We find that most people use very little Z depth in practice. Many of those that need more than an inch or so tend to be using it for fixturing of some type so I can see a threaded table being popular ( but obviously it’s not everyone)

It will take a little bit of gentle tapping to get it off.

@patofoto: heh, I still can’t get the table off. I mean, I wasn’t using all my strength - I didn’t want to break anything - but it did seem pretty much locked on there… Did you turn it upside down to be able to tap up through the slots in the machine floor? You really just removed the 6 bolts and were able to get the table off? I even tried taking the M6 screws and putting them in and pulling on those, as well as getting a stiff spatula (the one I’ve been using the pull up sticky-taped pieces) under the table, but neither seemed to do anything…

Hmm. Mine didn’t take much to pull off. I didn’t turn anything upside down.

Depending on the day and serial number, there are a number of pin types and Loctite combinations that have been used on the table. (And this is one of the biggest points of contention between different people in the shop) Later machines should be using undersized pins and less Loctite to make table removal easier.

You may have to turn the machine on it’s side and use a small punch to tap the dowel pins out from the bottom.

This is table I’ve built to clamp things down.I’ve used Delrin but I didn’t like how it turned out .Its self-lubricated characteristic is perhaps what I should avoid the most. Maybe I should try Aluminum. 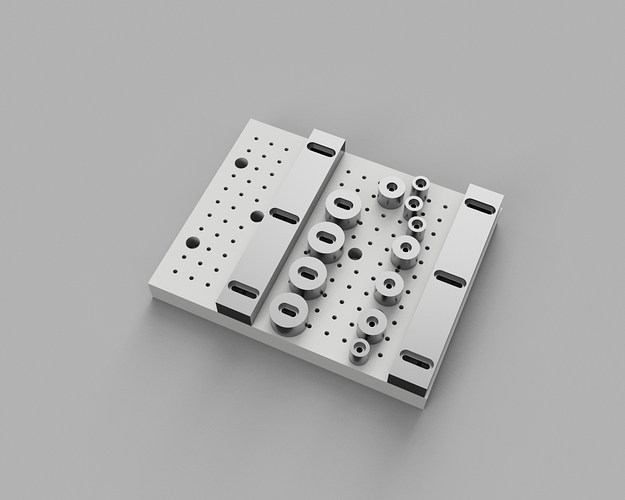 The hardest part was to tap all the holes manually (actually, used a drill). Thread mills are very expensive ($80~$150) but I may eventually try them out.

PS.: this is a borrowed design from a comercial product that fits Normad bed fixtures. http://www.hightechsystemsllc.com/pt_work_holding_system.html

interesting system … though unless i’m missing something, at 14" wide it won’t fit in the nomad.

I eMailed Derek Berger at High Tech Systems about making an adaptation of his HTS Modular Work Holding System. He had this to say:

I already make smaller versions for other companies. I would be happy to make these for Nomad in any size. Let me know exactly what sizes you would like. Thanks, Derek Barger www.hightechsystemsllc.com

A modular system like this for about $100 seems worth every penny.

absolutely! shoot him the pdf and see what he says …

I sent him the PDF of the table dimensions and he is checking on how much it would cost to make it. Stay tuned!

I’m also in! Keep us posted.