As per my conversation with Derek Berger at High Tech Systems … 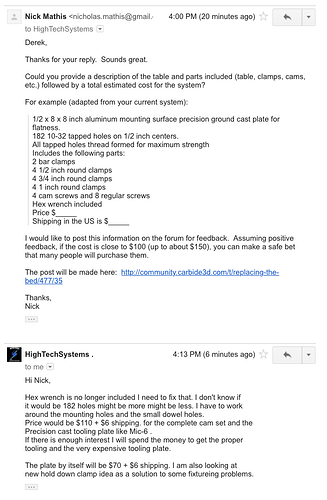 I will keep you all updated as I find out more.

What I wanted to mean was that I made the design to fit Nomad, not that HighTech’s bed would fit the Nomad.

I’m in! Sounds like a great way to facilitate holding stock. Would love to hear what our great folks at Carbide 3D think of this. Any comments?.

I’ve been speaking with him independently and he’s really going to do this. I just got off the phone with him.

He’s working on some rocker clamps so one can grab big items… an alternative to step blocks/clamps.

I think he’s going with a sea of holes that will leave the standard Nomad holes intact so the flip jig and vise would also work.

Count me in, too. Would love this, actually it’s perfect for an upcoming project I have.

I will order one of the full kits if made.

This should be very useful, There so much potential for fixturing, very exciting Nick.
Im not sure if the pdf of this table is in this thread, Nick, Can you send it to me?
Id like to look it over, can you attach it here or send it to me at apollo at carbide3d.com

It’s time to jump in with a little “full-disclosure”.

One of the upgrades that we’re been planning on is an upgrade to a 1/2" threaded table somewhat like the one you’ve drawn. Material would likely be MIC-6. We were going a little more simple- just our current table with as many M6 holes as we can fit on something like 20mm centers. Our version would not come with the accessories that you’ve shown above.

If this sounds compelling, let me know and I’ll see if we can push it up in the queue. We’ve got a bunch of metal to order soon so it’s not a big deal to add some thicker tables too.

If the Derek version looks better, no problem. We can leave our version further down on the todo list and keep our heads down on current tasks. We’re clearly fans of his work (our vise is proof) and I don’t think we’d ever do a table with imperial threads, and not in that hole density.

The Derek plan, as I understand it, is a replacement that will fully compatible with the current bed but also include a sea of threaded holes on 1/2" centers. Any time a sea of holes hole came too near or landed on a Nomad compatible hole it would be dropped.

The plate would be 1/2" thick MIC-6 but the flip jig and the vise would continue to work. One would only lose 1/4" of Z.

For me, the plate plus the accessories is compelling. Derek is working on rocker clamps so one can hold down material that could be up to 2.25" (or 2.5") thick. IMHO push off the work and keep making the current machine better.

I agree with @mbellon, let Derek do his thing, while you guys focus on the million other things you’re doing.

Agree that you guys should focus on more important things. Why reinvent the wheel?.

It’s not so much reinventing the wheel as making something earlier than we planned. Point taken though- we’ll leave it at it’s current position on the todo list, which is “not now”.

Derek has ordered materials and tools; he is also working on the design of some rocker clamps (for handing big blocks of material). Things are making progress!

OK folks, the replacement bed is done! It will be up for ordering shortly. The rocker clamps will go up separately sometime after the bed is done. All of the other accessories will be available immediately. 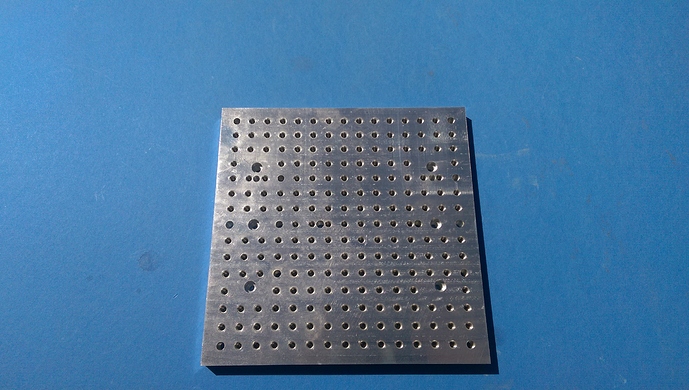 Awesome. Can’t wait. Are the accessories sold separately or will a complete kit be offered?. Thank you.