The motors on the Shapeoko are what’s known as “open loop”, that is, the controller does not know if the motor turned when commanded or whether the relevant axis moved the requested distance. Stepper motors move a known angle (1.8 degrees in this case) per step and the controls exploit this.

When the machine first powers up it finds the home position by moving until it trips the switches at one end of the travel of each axis. This allows the machine to set an internal zero point for each axis and it then simply remembers how many steps it has requested up or down that axis to “know” where it is.

If something happens, a pulley slips or the motor is unable to step when requested, there’s no way for the controller to know this as there is no feedback system.

So once your machine has slipped off track, be that from a loose pulley, loose belt or simply too much cutting force, it’s going to be stuck over there until you re-initialise the machine.

Thank you for the great feedback! The pictures were rotated 90degrees on accident. The shift has been consistent in the x-axis (I can’t tell you if it’s always positive or negative shift however).

Thank you for your help, however I am going to admit I really don’t understand your advise. Are you able to please re-phrase in noobie terms? I appreciate it! I love learning about this machine, and I found I learn more from making errors than perfect productions.

If this is the case, then everything after the ‘slip’ would be off as well. This is not the case. It will cut one portion off track, then jump back on track right after. Then when it drops down to the next layer, it jumps off at the same exact point (then back on…rinse & repeat).
This is why I was wondering if the problem could be digital rather than mechanical?

My guess is a semi-loose setscrew on the X axis motor pulley.
It is not impossible that the pulley slips on the shaft in one direction (say, the setscrew is not quite pressed hard enough enough the motor shaft flat, so it slips), then it “catches” the shaft’s flat again, then the cutting direction changes and it will slip & catch once in the other direction…ending up where it started.
I agree it sounds unlikely, but I would still triple check the two setscrews on the X motor pulley, no harm in doing that anyway at least to rule out this hypothesis.

Will is basically suggesting you make the “trench” for your cut wider so that the endmill isn’t tight within the slot when it is cutting. It means it will cut with a smaller part of the tools radius, rather than about half of its radius.

That said, I’ve never had problems cutting exactly like you are doing.

There is a community-maintained glossary at:

Tooling engagement is how much of the cutting surfaces of the tool which can be involved in cutting are potentially bogged down in cutting. Note: This is Lesson 7 of our Free Feeds & Speeds Master Class. Want to improve your milling finish?  Trying to reduce post-machining finish work or

I would say that about 90% of all issues with unexpected behavior when cutting are mechanical, especially with new users and machines. As @Julien and myself have said, please check the set screws on the X motor pulley. It is very likely the issue and if it isn’t you will rule out that possibility by checking…

My experience aligns with this. If you’ve not seen the hint already, taking a marker pen and drawing a line across the face of the pulley and the motor shaft is a great way to tell if it’s slipping on the set-screws.

Surprised nobody has mentioned the pulley set screw.

John,
Guarantee that this your set screws on the pulleys. I documented the issue here that is the exact same as yours:

(Kinda irritated - as a newb I can only load one photo and two links - I’ll try to break my post up to explain…) I’m getting a weird stretch/offset on the last pass of my cuts. I’ve seen this happen in both the X and Y axis now. The best I can explain it is the first 2 cuts are on the path as they should be. The final pass at full depth, it’s like the vector is stretched. You can see in this pic there is a slight lip in the middle of the 5 and larger lip at the bottom. This is on the Y axis. …

This is the full solve with parts you need to purchase (it’s only a few $).

After dealing with the Y1 pulley set screws backing out numerous times on my XXL and messing up jobs, finally decided to implement regular socket head screws - covered here and other places, but a couple points to add for others with the same problem. The socket head screw size you need is M3 x 8mm, you can get a multi-size box from Amazon for $6 that will be more than enough. You want to use “purple” thread locker, it’s low strength and made for set screws. Several brands out there for ab…

This is a frustratingly simple fix. It’s a bad experience for a new user trying to learn a machine and track an issue like this. You get all this advice on how troubleshoot it and misdirection about material forces, speeds and feeds, and slotting. The short story: it’s a design flaw that Carbide3D could resolve.

I’m at a loss on how to get the Carbide3D team to implement straight out of the factory. It’s a near zero cost solution for them, switch out current inadequate grub screws with better cap screws and removable thread lock. I’ve tried escalating here and emailed support. I’ll try again emailing support.

It’s not so much the set screws, lots of other machines use these successfully, it’s the lack of threadlock on those set screws allowing them to vibrate loose. There’s no shortage of holding force when they’re done up properly.

Using larger head steel bolts in these small thread aluminium pulleys to get more torque on the screw would likely move the problem to people stripping the threads out of the aluminium pulleys.

Sent this to support@carbide3d.com and sales@cardbide3d.com. Hopefully it will get some traction and a resolution.

I’ve emailed about this long ago and continue to see this problem in the forums. The set screws used on the pulleys are inadequate and often slip, especially for new users. I documented a simple fix here:
Pulley set screws - XXL

This is a solve that would cost Carbide3D near zero and prevent frustrating new user experiences. In the forums they get misdirection about material forces, speeds and feeds, and slotting. The short story: it’s a design flaw that Carbide3D could resolve.
Shapeoko XXL - final pass is stretched or offset
Shifting off track

Looking through the posts and replies, dozens of people have had this problem. How can I help you champion a change to this simple issue that causes a lot of grief and ruined projects, especially for your newest users?

It would be amazing if they proactively sent every owner a pack of 8 M3x8MM cap head screws and small tube of removable thread locker. That would be Customer Obsession!

So, as an update. I have been trying to tighten the x-axis belt. Unfortunately, I feel I am getting the belt as tight as possible, but it is not solving the issue. My speeds/feeds are slowed way down as well. I am lost for answers and getting frustrated! Is there another way to tighten the belt other than wrapping it through the little bracket and tightening the set screw?

Please post a file which causes this problem, or send it in to support@carbide3d.com — include the generated G-Code and step-by-step notes on how you are securing your stock and setting zero to it and managing all tool changes and we will do our best to look into this with you.

The screws that attach the tensioning bracket to the end plates are not set screws. A set screw does not typically have a head. See below: 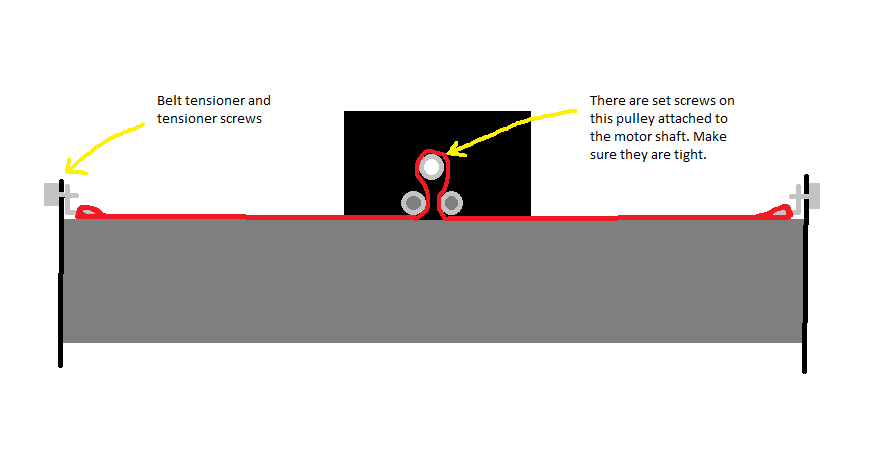 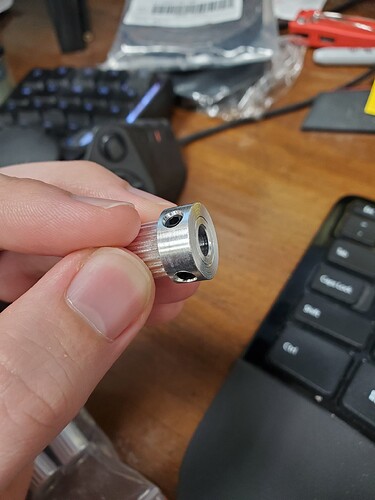 One set screw should tighten down on the flat of the motor shaft.

Thank you so much for the explanation. I definitely have been looking at the wrong location to tighten the belt.

Question: Is there a proper way to access this piece? I can probably take things apart until I reach it, however this is definitely not the desired approach.

Thanks again, and all help is very appreciated!

@WillAdams or someone with a Pro will have to chime in here. I have a Shapeoko 3 so I don’t know exactly how the Pro is built. I imagine there is an angle at which you can access the set screws without disassembling it. You may have to anyway in order to verify that one of the screws is on the flat side of the shaft.

Because of the shroud for the X-axis it will be necessary to slacken or possibly remove the belts and then remove the X-axis motor.