I’ve recently purchased a new home, and luckily for me I had a 3+ month overlap before I have to be out of my current home, so I have some time to really set up my XXL the way I would have liked to in the beginning(garage is the first room in the new house that got fresh paint!). There’s a couple things that I really want to fix with my set up.

I recently read a post on here that mentioned part of the XXL sag could be due to unsupported weight in the middle. I can’t remember who mentioned it (Maybe Will Adams?) that they have a rubber mat under their machine and no leveling feet at all? So I’ve been thinking about this a lot and since my machine is about to move into a new home I’m trying to correct the issues above along the way. So this is what I’ve devised (insert evil “I’m going to take over The World” laugh here).

Thinking about buying three of these: 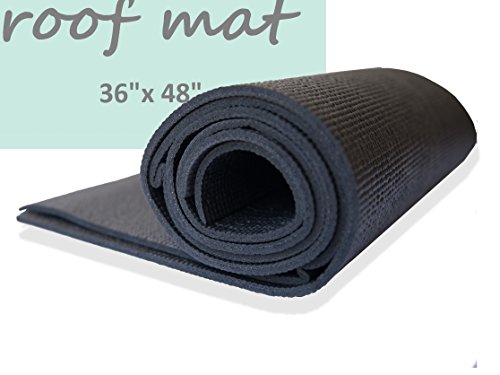 The Roof Mat sits under your cargo on the roof of your vehicle. It is designed to protect the roof from damage caused by your cargo (hard objects, buckles and zippers, sharped ends, etc.) and it's mad ...

Covering the top of my bench (48"x48") with 1 plus part of another. Then adding another 48"x48" piece of MDF (1/4" thick?). Then covering that with the remainder of the 3 rubber mats. Taking the leveling feet off the machine altogether. Then adding a 1" thick MDF wasteboard, replacing the stock wasteboard. Add T-track, with 3/4" thick MDF slats in between that have 2" CTC threaded inserts? I figure the welded on nuts on the bottom of my XXL will just press into the mat underneath? Thoughts, ideas, follow on musings?

That’s pretty much it.

I have been considering drilling holes in the Baltic Birch plywood I have where the PEM nuts for the leveling feet go, cutting matching holes in the mat and then using large washers to fasten things together (w/ a vibration damper of some sort under the washer) — but that will likely wait until the weather is nicer and I need to work outside.

Will, Jude, Jim, I couldn’t remember who it was only that they sounded smarter than me, haha!!! I’ll probably give this some more reading then head off on my adventure! Thanks for the feedback!

Not smarter … It’s like my old biker friend who’d say “I only got two brain cells left bouncing around and when they collide once in a while … I get an idea” . If only I didn’t relate so well. 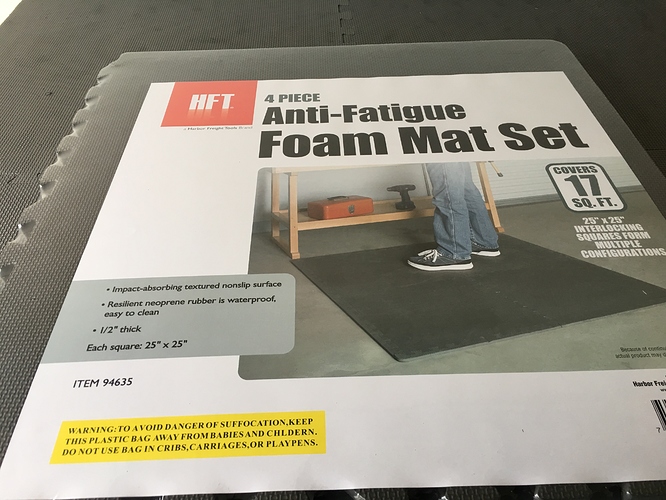 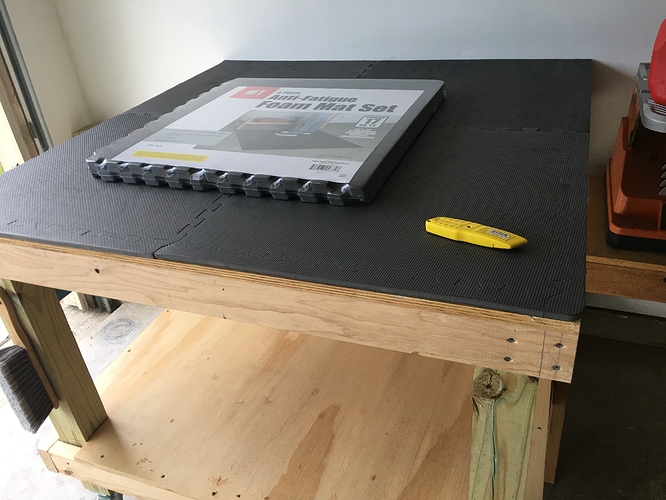 The XXL is still at the old house. I’ve wrapped the movable bits in cardboard and zip ties so it cannot move while being transported in the back of my truck. Some rain today so I opted to move the table only(which is kinda funny since my wife took the truck and I got wet on my bike. Me and bike wet, but the XXL is still nice and dry!).

Anyone have any thoughts on if I should add a “stabilizing” sheet of MDF to the foam sandwich?

Great question?
I’m wondering which method would yield the most level bed?
The foam might mold itself to the framing more uniformly, but there might be non-uniform deflection?

Yea, I’m not sure either.

XXL will sit on top of foam either way, without leveling feet at all. I looked at the XXL today before I took its table away and I can visibly see sag in the middle. After this experiment I also plan to replace the 2 piece waste board with either 1 piece of 1" MDF or 1" Starboard HDPE(depending on what I can afford after this house move). Moving is fun, not!

I Did have those style mats on the floor of my CNC room floor. Increased my disconnects significantly Removed them now have only had a couple over the past year. Now they are limited to my garage work shop.

Hopefully it won’t cause any issue directly under the machine.

I know it’s a pain, but can you set up one method, measure bed “flatness”, then perhaps try the other method and re-measure “flatness”? (says the guy who’s not doing it).

I’ve never (knock on wood) had a disconnect, but if I do I know where I’ll look first. Good info, thanks!

That would probably be a worthwhile experiment, but what I think I’ll do is try it with and if that proves unsatisfactory I’ll try without. I also plan to try to shim up any unlevelness as well as possible to see if I can avoid tramming the whole bed with a cutter. I usually put a secondary waste board on top anyways for whatever project, so I can always resurface that if needed. I really doubt it will be “perfect” just by losing the leveling feet, but right now it can definitely be better. Will report my findings!

I’m interested in your results on the foam. There’s a net positive you’ll gain in “flatness” and rigidity by losing “leveling feet”.

When I was measuring my XL, the bed moves 5 thousandths or so with fairly light pressure in the middle. For most things, I’m not seeing that as really very significant. I had 30 thousandths from corner to corner before I surfaced the bed. After that, now I’m down to the variation that comes with weight and clamping, and I’m not too worried about it for what I’m trying to do. I’m not sure what you would be doing that would both be multiple feet in size, AND sensitive to a few thou’. If the movement in the middle of the bed is a problem, it’s much less towards the edges.

If this is really bothering you, I’d recommend a torsion box bed instead. It’s cheap to build, fairly simple, and very stiff for the amount of material involved. The first three minutes of the video here: http://www.gowoodwork.com/2015/shapeoko-3-table-cabinet/ has someone building a nice cabinet/torsion box (and plans for the cabinet too)

Great link Mike, thanks. I even have a KREG pocket cutter as shown in that build. The flex is not bothering me as it’s been virtually mitigated by dropping the machine frame directly onto my bench top (3/4 MDF). I’ve gotten to within 5 mils East to West across the full travel of the bed. There are still some inherent differences along the front of the frame vs. the center, and I’m curious to know if an additional foam layer would potentially mitigate that disparity,

Agreed, the sag is worse in the middle with weight on the bed. My current bench is a 3/4" plywood top with 2x4" frame all around and across the middle with 4x4" legs, it really doesn’t flex, although I could keep screwing wood to it I guess. The sag I have is definitely the machine, and while I doubt this will completely cure my levelness it should sure help. I think having a 1 piece waste board should help a bit as well, removing a loose joint right where I’m seeing the flex. I had some other ideas to try to “jack” up the middle so it would have better support that I might try next if this is failed experiment.

If you’ve surfaced the bed, and it’s sitting directly down on the bench, that should be about as good as it’s going to get. The variation from weight on the bed might get a little better with a foam support underneath, but it won’t be better than down on a fully supported hard surface. I don’t have a ton of experience here, this is me making some moderately educated guesses.

I am prepping for tramming/surfacing, and this will be my first go-round with trying my hand at these exercises. I even ordered up my surfacing bit today (along with a couple others). The “truer” the bed initially, the less surfacing required.

Just losing the levelers has made a profound positive impact on overall flatness. I agree that’s going to be about as good as it’s going to get.

m wondering which method would yield the most level bed?

If “level” is the question and if the table will be stationary (not on wheels) , my solution fit my situation perfectly, YMMV.
I poured a layer of self leveling cement on the floor of my enclosure ensuring an absolute level and solid base. Than I put the machine on a 1/2"rubber mat like in the picture above. The rubber absorbs the “prem” (?) welds on the bottom of the front and back rails and the whole machine sits level. If you do the SLC remember to build a temp lip around the table top higher than the cement so it can flow but not onto the floor. The SLC was $36 and I used 1/2 a bag for roughly less than 1" layer.

those style mats on the floor of my CNC room floor. Increased my disconnects

my mats aren’t glued so I think I’ll run an extra ground wire under them to dissipate any static. I wired a dedicated static ground outlet into my control panel for such uses. Used a replacement plug and wired each prong with a bare ground wire and from the outlet side wired the positive, neutral and ground connectors to ground, no current to the outlet at all. From the plug side I can static ground the router, vacuum line and now the mat all to one outlet.
Excellent musings.

Static electricity doesn’t work like that. A piece of metal window screen (not plastic coated) completely covering the foam, connected to a ground wire would work better. Still won’t be awesome. The whole reason static is a problem is because it forms on a non-conductive material until it reaches high enough voltages to essentially “arc over”…so dropping a wire on it won’t appreciably make a difference. The window screen can keep the regions small enough that the voltages don’t get so crazy high. It looks awful, catches a lot of dust. Paper, non-conductive foam, sticky tape on a roll (something about how the adhesive works means many thousands of volts are generated as it peels apart) - they’re all awful stuff to be around electronics. You need a conductive barrier, not just a “drain wire.”