You might be familiar with the native size for Makita’s and Carbide3D’s most popular routers for the Shapeoko: 3/8". It requires a special collet (which is actually just a tapered split collet), which I have: https://www.makitatools.com/products/details/763619-3

I would assume a lot of you would also be familiar with Amana, a popular brand of carbide cutting tools that Carbide3D sells. I recently happened upon this: https://www.amanatool.com/te-102-cnc-high-precision-tool-holder-extension-3-8-shank-5-1-2-inch-length-1-7-64-inch-dia-1-4-inch-inner-dia.html

Are you thinking what I’m thinking? I really want to cut off most of the shank and fit this into the C3D router permanently. It may end up killing the bearings in the router prematurely, but considering the price I think it may be worth it. It’s only rated for 10K, but other than the danger of it shooting my eye out, can you think of a good reason not to at least try this setup?

This basically turns the router into a disposable commodity item - which is kind of is already - instead of the primary user interface for tool insertion. Anyone who has gotten a Makita collet stuck has been on the lookout for an alternative.

More than just about changing tools though, I have to assume that the increased spinning mass would probably help more than hinder. Looking for others’ opinions on this.

Story TIme… A long time ago… I raised my Shapeoko XY, and Z (rails) about 1.5625" (lol) inches. This was AWESOME because I run a lot of larger parts AND this ALSO meant that the Z would clear my 4th-Axis’ 4.0" (100mm) 4-Jaw, BUT this also meant that I could no longer reach my aluminum table. [IMG_6847] When needed, I would place a 3/4" plywood on top of some 123 blocks…not great, but it worked; however, I longed for my beautiful ultra-flat aluminum table. …then a few weeks ago I saw a post…

@WillAdams That first link was me asking far dumber questions earlier this year. Now that I finally found the Amana adapter, which I could not find for some reason before, I think I’m going to try it. The other link basically confirms that I’m not crazy. What a relief!

One of the unique advantages of the Shapeoko 4 is that it is trivial to raise the entire XYZ assembly by turning taller standoffs. Because of some quality control issues, I haven’t actually finished assembling mine, so I might later find that this isn’t the case. I hope not!

I probably should have linked to the whole lineup, since it can only be found via a search:

There is an option for a 1/4" shank and an ER16 nose, which is probably more than adequate for the job.

I bought the 3/8"-ER20 version, and I should have it sometime later this week or early next week. I’ll report back here when I get it.

I received the Amano Tool ER20 adapter/extension today, and it is pretty much everything I was hoping for and more!

I’ll have to cut off about 63-ish millimeters from the shank (that’s about 2-1/2") for it to work with the CCR (or Makita), but I expected that. It was a surprise that it is as compact as it is! Part of that is the blind bottom of the bore, which is very rough from a large drill point. This keeps the overall mass quite low, since it doesn’t need a coolant-through bore or tool-setting screw at the bottom. With the included 1/4" ER20 collet, the mass is 181 grams, however I suspect it will be around 110-ish grams after the shank is cut down.

I’ll have more photos once I cut off the excess shank, but here it is after unpacking. Bic pen for scale. Also shown is the required Makita 3/8" collet, which does not use the 3/8" cylindrical extension of most other collets. It doesn’t need that part for 3/8" tools. 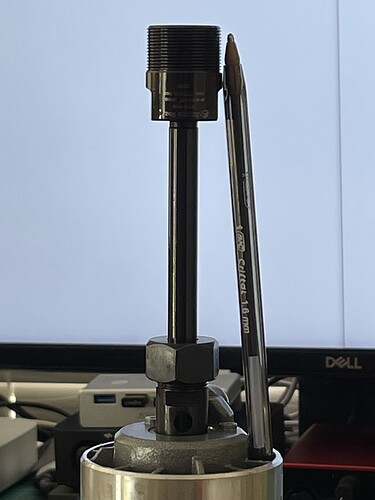 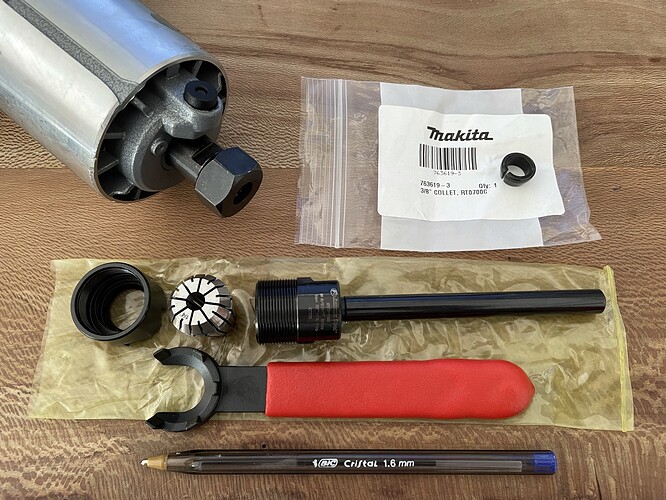 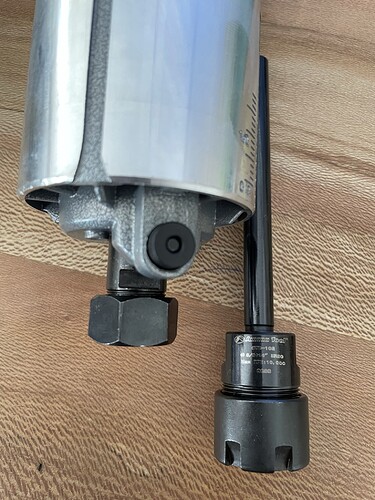 Looks familiar… (I left mine a little longer because I need the reach…since I railed my X/Y Rails 1.56") 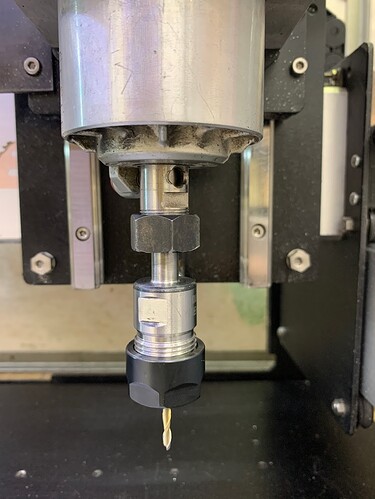 I’m curious if you have any regrets or if you would have done anything differently. How are your bearings holding up, for starters?

My intention is to eventually turn longer standoffs than the 40mm ones that came with the Shapeoko 4. This chuck adds coincidentally 40mm to the length, so I’ll probably make the new ones 80mm or longer if I determine a need for it.

No regrets…my Makita will be 5 years old on 7/28, and she is still tight…(isn’t that a Cheap Trick song…)…I normally use a vise OR my 4th axis to hold my work, so this isn’t something I use very often. Having said that it does flex …a lot… (fine for cutting wood…but NOT metal…and that’s something I can live with) 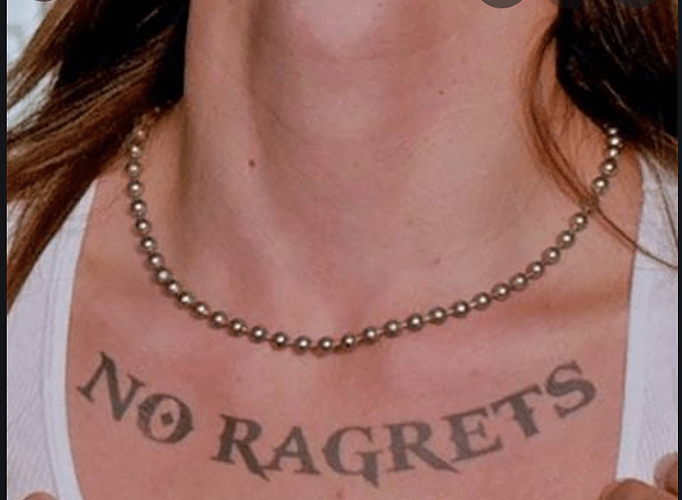 My intention is to have as little stick-out as possible. Can you do my a favor and measure the minimum shank length required for the Makita? I may upgrade to it someday and I’d like to know how long the shank needs to be to bottom out in the Makita.

(I think this is what you asked for…) 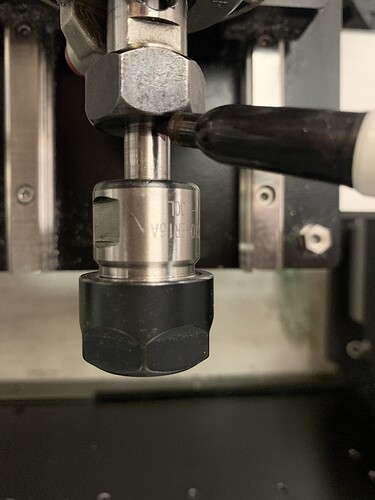 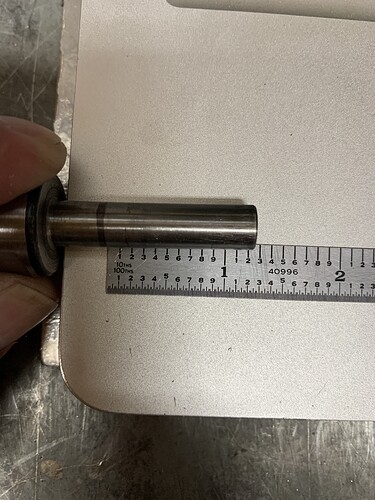 I’m glad I asked because the C3D router is more like 30mm.

I have cut the shank down to 30mm and the mass is now 142g with the included 1/4” ER20 collet. That’s a bit more than I predicted. Overall, it adds 41mm-ish to the stickout, which is not insignificant. 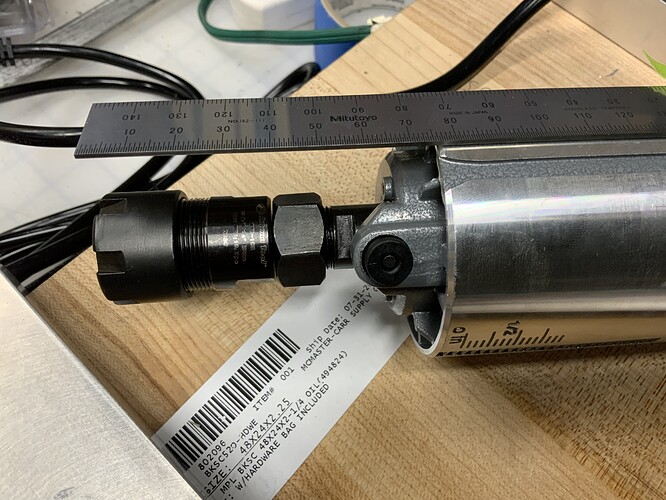 However, with access to an infinite range of diameters I am no longer limited to the handful of Makita collets available. Probably more importantly, I can set tool stickout off of the machine, like a real CNC mill. Having two of these makes a lot of sense. 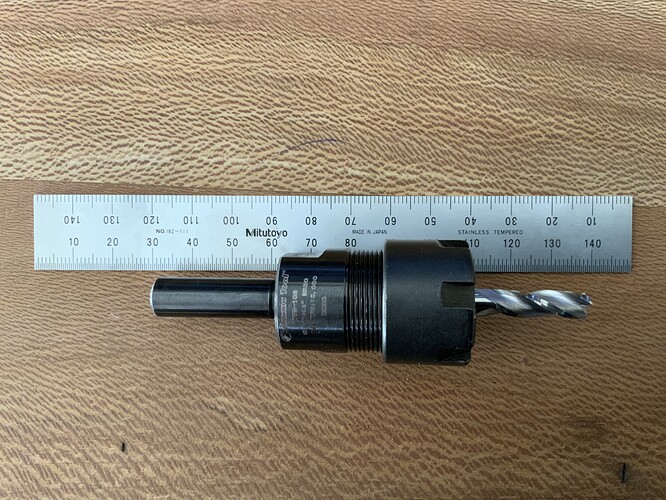 Rich - you extended your x/y rails?

He increased the height of his endplates to gain that additional clearance under the rails. 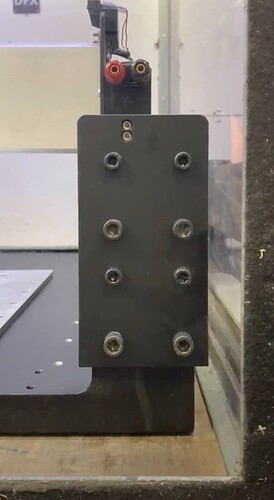