I was reading some old posts on using standard wood router bits but they speak in general about using them. So I have a standard 2 flute half inch straight bit 1/4 shank, where the flute or cutting edge is straight not spiral. Do I calculate the F&S and DOC the same as an end mill? I want to use it for a large pocket tool path on a sign.

Water cooled spindle
Color me happy and excited
Cutting forces with Carbide Create -- and how I got derailed a bit
luc.onthego (Luc) December 4, 2019, 10:04pm #2

For straight bits, I would use the same F&S calculated for regular endmill of the same diameter and number of flutes but endure you do not exceed the maximum RPM for the bit as recommended by the manufacturer. If you use special profile bits, all bets are off on F&S but some manufacturers e.g.: Freud provide F&S for some but not all of their bits.

I want to use it for a large pocket tool path

I think those router bits are not center-cutting, are they? If so, how do you intend to use them for a pocketing toolpath? (Cannot plunge ? ). This is a naive question, I never used router bits before (on a CNC or otherwise)

You are correct, I believe, in that they are not center cutting. But they are used frequently for plunging. Before spiral bits, that’s all we had. To your point though you have to let the bit do the work on the initial plunge which is most of my concern getting the plunge rate slow enough. I got to thinking last night if the Carbide Compact Router/ Makita accepts a 1/2" shank? I don’t recall seeing a 1/2 inch collet. May not be big enough for it.

Elaire has various sizes at:

I called Elaire and I was told that the 3/8in collet would not be made available for the Makita and probably other compact routers as they feel it does not have enough “Meat” to hold the bit properly. I purchased mine directly from Makita but it is not considered a precision collet.

With the 90mm mount, I wonder if anyone has tried to install a full size router. My Milwaukee router has a 90mm body but I don’t know if it would fit without modification. That would provide the ability to install 1/2in endmills without committing to a large spindle.

in that they are not center cutting. But they are used frequently for plunging. Before spiral bits, that’s all we had.

Aren’t/weren’t mortising bits typically used for proper/safe plunging? IMO, with the exception of those with bearings, you should be able to use any “wood” router bit in a CNC router as long as it fits and is used as it would be in either a hand held or table mounted router. Unlike endmills, cutter diameters are available that exceed the shank diameter. So, being limited to 1/4" shanks isn’t really that big of an issue - if you do it right (and don’t try to cut metal with them.)

You’re right @gmack . I was just looking at Freud’s site and the bit in question is suitable for cnc and even gives F&S but the’re example yields a feed rate beyond a S3. chip load of .008-.010 at 18K rpm = fr 288 ipm (assuming my math is right). I thought I saw somewhere that 200 ipm is max for s3 and Carbide’s chart doesn’t go beyond 100 ipm on any material. Dialing the rpm down to 10k gets me to 160 ipm for hardwood. That seems high but I’m a noob. what do I know! I plan on doing some tests to see how it does. Wood working for a few decades, you can tell when your feeding material too fast cause your doing it by hand and can adjust on the fly. But here, once you press start its on autopilot. What can I say. This is a significant investment for me and I’m just a nervous noob. @gmack, can you suggest a starting point on F&S and plunge rate?

I must say, this is a great forum and community so far. Thanks everyone for your comments!

Most manufacturer’s speeds and feeds charts aren’t appropriate for hobbyist CNC routers. So, the chiploads and feed-rates they recommend are generally way to high.

What bit is it? How would you use it in a handheld or table mounted router?

Personally, I’d max out the router speed for the bit and feed at a comfortable rate (generally starting far less than 100 IPM). I wouldn’t worry about making “dust” rather than “chips”. As you know, higher router speeds and lower feed-rates/chiploads usually provide the best results and reduce operator/CNC machine force requirements. I wouldn’t expect the Shapeoko to do much less or more than I would. So, think “how would I do it by hand?” - then back-off as much as you need to feel comfortable for the Shapeoko to start. Carbide motion makes it easy to increase and decrease your feed rates while cutting and a 100% increase in feed rate should be roughly equivalent to doubling the depth (or width) of cut.

This is just my opinion, so you should also consider the advise given here.

He said 2 flute straight bit in the OP

I think those router bits are not center-cutting, are they? If so, how do you intend to use them for a pocketing toolpath? (Cannot plunge ? ). This is a naive question, I never used router bits before (on a CNC or otherwise)

“My bad” - It appears that “mortising” bits now refer to “hinge mortising bits” rather than bits intended for plunging, as would be required for cutting mortises for mortise and tenon joinery. But Amana makes “straight plunge” bits that are included in their Vectric and Fusion 360 tool file data bases. 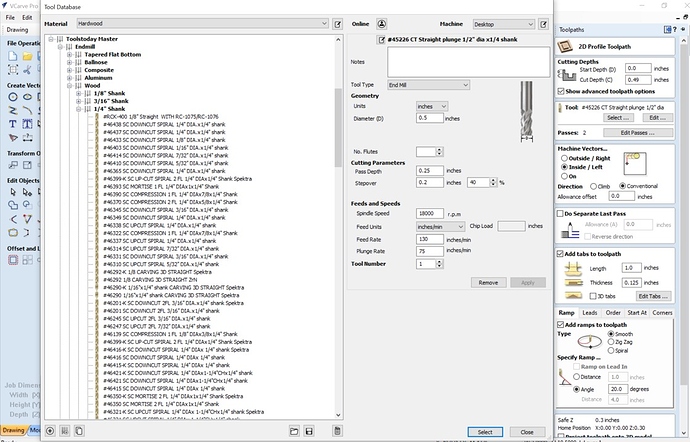 Amana Vectric1119×717 178 KB
It hadn’t occurred to me until @Burly’s post that 1/2" cutters could be used in Shapeoko standard trim routers. So, I ordered one and intend to give it a try. I intend to start as shown below, monitoring power and increasing feed rate as I go. Of course I’ll reduce the plunge rate to a more reasonable level too (like 20 IPM).

Excellent! Thanks! I might have time this weekend to give it a whirl.

Please don’t use Amana’s speeds and feeds shown in the first picture. But you should be safe with the values shown in the second (for all but the hardest of woods). You probably shouldn’t exceed the manufacturer’s maximum speed for the bit or plunge with it unless it’s designed for that. Note that reduction of speeds will likely cause proportional reductions of available cutting (router) powers and increases in machine forces. Also, reduction of feed-rates, depths of cut, and/or widths of cut will likely cause proportional decreases in cutting powers and machine forces. You might find this calculator useful to predict the impact of such changes.

Also, since 1/2" cutters can provide twice the cutting powers (and material removal rates - MRRs) of 1/4" cutters without increasing cutting forces, you might want to monitor your router power draws to ensure that you’re not pushing the routers too hard. With 1/2" cutters, it’s likely that router power availability rather than machine rigidity that will limit stock Shapeoko achievable MRRs. 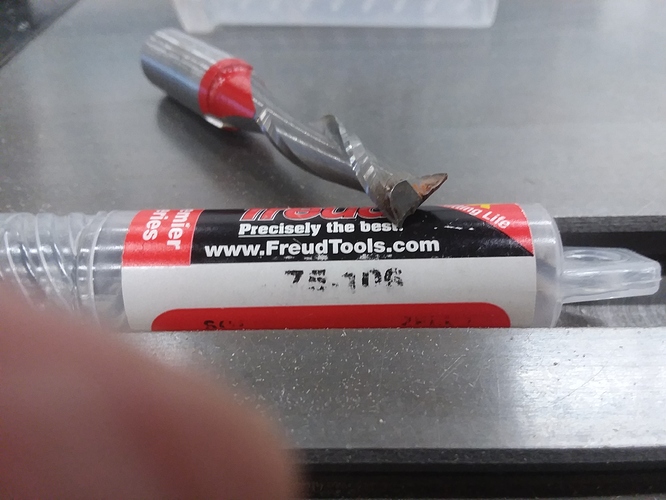 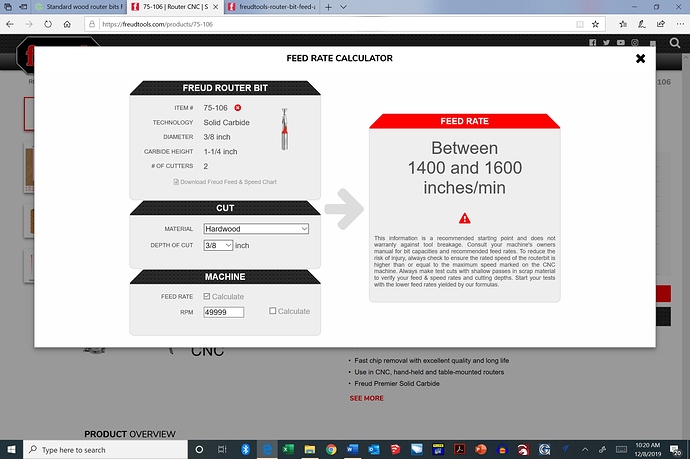 It appears that this (35,000 RPM maximum speed) Amana bit can also plunge (drill) straight in but will leave a small inverted cone in the center because of it’s center cutting geometry. I’ll check that out. 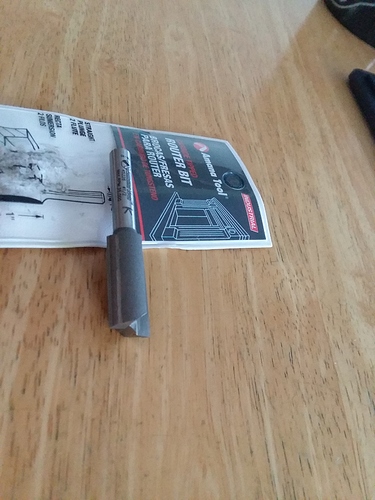 A post was merged into an existing topic: Speeds, Feeds, Power, and Force (SFPF) Calculator

Well a busy weekend and I had a chance to do a couple of tests. But I must admit I made a mistake. The 1/2 inch bit is really a 5/8 inch. To be exact Freud 04-0136. I did download Gmack’s spreadsheet and found it helpful. So I took Carbide’s 1/4 em guideline for hardwood as a starting point to determine chip load and Julien’s suggested chip load range . I settled on a chip load of .0016 rpm 19700, feed 63ipm .2 stepover and plunge of 15 (wanted to be rather cautious on plunge). I attempted two doc at 1/8 and 1/4. I got nice clean cuts no chatter. The only thing I found was that the 1/4 doc was too much for this bit. I lost steps after 1/8 down into the plunge and ended up with a 1/8 slot. As you can see I got good results but it’s not an ideal bit for plunging.
I also discovered that you cannot use the probe to zero x and y for this bit because CM only has a few selection for end mills and thinks in this case that the bit is a 1/4 inch. That should have occurred to me but the Spock in me was sidelined by the emotion of the moment. Any how I could not find a way of adding end mills for the touch probe.

. @WillAdams I think that would be a wonderful addition to CM. I added some pics here so you could see the results and chips and bit. If someone sees something off let me know. Thanks for everybody’s help and advice!! My dust boot arrived today and should have my hose andconnectors by end of week I hope. That’s what I will be doing this weekend! 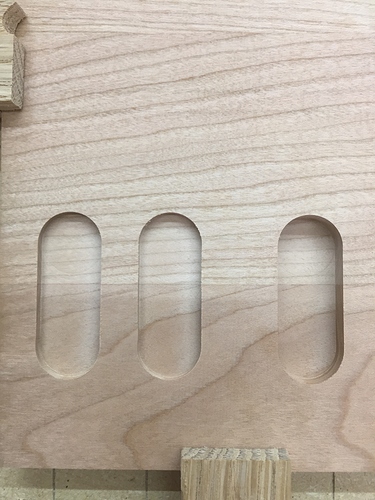 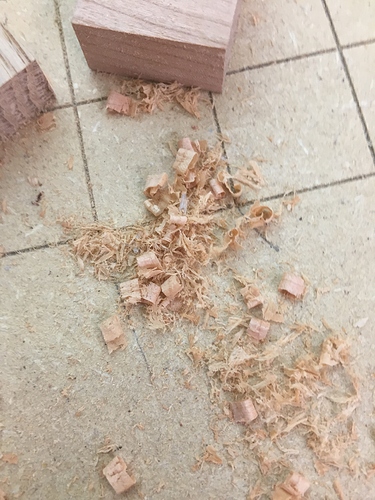 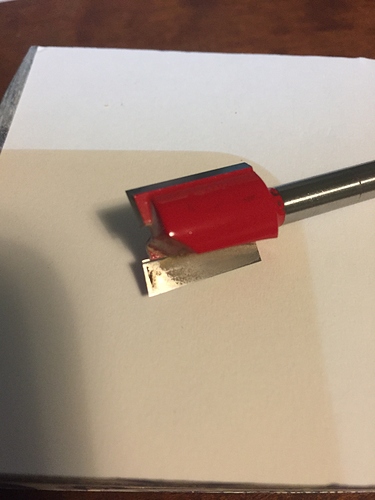 I’m afraid that at this time, Carbide Motion only supports endmills which match dimensions of those sold by Carbide 3D — since it sets zero to the bottom center of the endmill, one can set the initial zero with a supported endmill (or use a matching precision ground blank) and then change to the tool which you wish to use.

You can buy 2 fluted router bits that are designed to plunge in to wood. If you CC allows ramp in plunge that would also help get the bit into the wood then it work like any other bit.
Jeff

Could the probe software been changed to do bit setting Rather that creating another $120 item to buy.
Jeff

In theory that would work — it was actually something I considered when designing my Probe holder.

The spring-loaded plunger on the BitSetter is kinder to delicate endmills and sharp points, and far more reliable than the bending plastic arm I was planning on.