Here’s an interesting video showing how spindle milling powers (hence forces) can be kept constant if they are properly monitored and used to control feeds and/or speeds in real time. That seems to be the goal of conventional “High Efficiency Machining (HEM)/Adaptive Clearing”. This video shows HEM where forces are monitored but apparently not used for real time control.

It’s a lot easier and less expensive to measure spindle or router cutting power consumption than it is to measure forces. Cutting force can then be easily calculated from that power with this equation: Cutter Force(lbf) = Cutter Power(HP) X 63024 / Cutter Speed(RPM) / Cutter Diameter(in.) / 2. The SPDF Calculator provides inputs for power draw before/after and during the cut so it can calculate the cutting power and force.

The SPDF Calculator supports cutting power calculation from either current measurements for HF Spindles or power measurements form VFD, AC router, or DC spindle/router power supply input power measurements. Although most/all HF Spindle VFDs are supposed to enable monitoring of spindle current some, like Huanyang, apparently don’t. A power meter on the input to the VFD is an alternative approach that is also suitable for measuring and monitoring the AC power inputs for other types of spindles and routers.

That is a pretty cool concept! I did actually poke into if one could capture spindle load for the Nomad after I saw that was a metric available on Haas machines. Took a drive-by look at the PCB and the motor driver spec sheet and as I recall the driver chip supports current measurement but I couldn’t find the sense resistors (if they exist) required on the controller PCB.

It’s probably a lot easier to monitor the spindle’s power supply AC input if you can with something like this.

Agreed, definitely the winner for Shapeoko with spindle power coming independent of everything else, but the Nomad AC input is spindle power + axis motors + controller + whatever else may go on which I suspect would rather spoil things. Nomad would probably require a bit more of a boutique solution that sits between the driver board and the spindle motor.

I think you’ll find that the only thing that varies much is spindle power when cutting. Maybe do an “air cut” to verify that and determine a more accurate non-cutting power draw if necessary? It can be difficult to measure the power input into brushless DC motors unless you have the proper equipment and expertise.

Agreed on the relative complexity. Its not really the expertise or equipment holding me back - its the time and motivation. Have many projects to work away on - at some point maybe I’ll get to this one.

the driver chip supports current measurement but I couldn’t find the sense resistors (if they exist) required on the controller PCB.

It appears that current sense resistors aren’t (weren’t?) used, and that the Overcurrent Protection threshold is (was?) set to 8.8 +/- >20% Amps.

@mikep, @Tshulthise Here’s a 300 Watt water cooled HF spindle with a 0 - 60,000 RPM speed range that might be a nice upgrade for the Nomad. And, using the right VFD with it would enable direct monitoring of current.

@neilferreri - Here’s a video explaining the value of monitoring HF spindle current (power) draw. @Julien - he’s using a Huanyang VFD to do it. @Vince.Fab - take a look at what Piotr can do with his Jianken ATC spindle.

The specs for the following current monitoring meter and periferals look promising for easily monitoring and logging spindle motor currents. I have everything but the meter, so I’ve ordered one to try it out. Owon also sells inexpensive oscilloscopes. 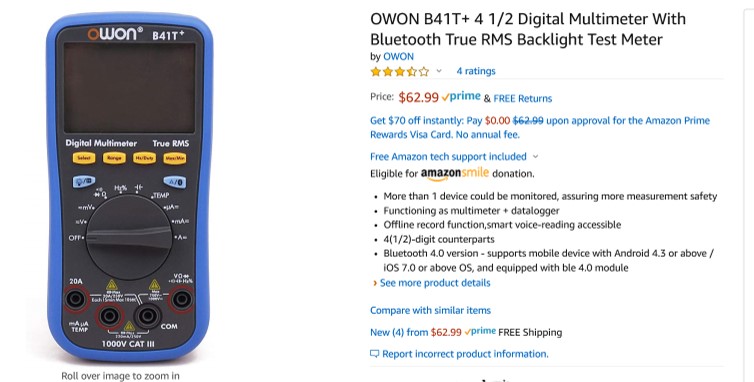 excited to see what you walk away with on all this

@PaulAlfaro: The meter is really nice and a great value. It’s a quite accurate AC coupled RMS voltmeter/multimeter with Bluetooth that allows readings to be displayed on either Android devices or PCs with the optional Bluetooth-USB adapter shown below. It’s supposed to work with IOS too. The yellow buttons can also be exercised via Bluetooth.

Bluetooth-USB adapter822×378 51.5 KB
In “Offline” mode it can be configured to store 10,000 readings at sample rates up to 1/second. It turns off Bluetooth to do that, but the meter’s display keeps updating. When it finishes recording the meter beeps 3 times then apparently turns itself off (smart!).

The “Offline” data can be downloaded into either an Android device (I used a Samsung J7) or PC (I used a Surface Pro 3) equipped with the above adapter (which finds other Bluetooth devices too, so you need to select the right one.) I also needed to run the PC meter software as an Administrator to get the data stored on the PC. Each line of the stored .csv file (which gets automatically overwritten) contains the number, date, time, measurement mode, measurement unit, and measured value for each sample. That makes analysis easy with Excel.

Since motors used with VFD’s apparently generally do a good job of filtering out the PWM base frequencies. The active AC/DC current probe shown in my previous post is likely overkill for most. This passive current probe and associated connectors shown below should be adequate with HF spindles up to 1000 Hz. 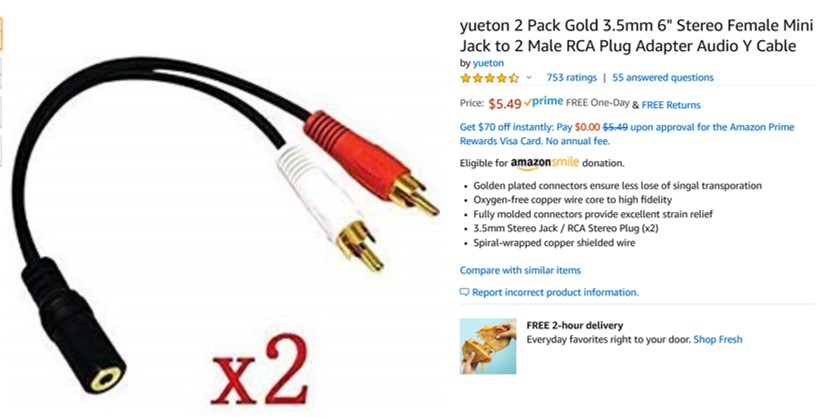 Banana to RCA823×288 49.5 KB
@Julien, @AlexN, @JappieMike, and other with HF Spindles might be interested in this too, Thanks for expressing yours!

Thanks, I’ll make a note to try this out once I have my spindle set up.

Piotr monitored spindle currents while milling 6061-T6 aluminum under a variety of conditions with his Jianken “2.5kW” ATC spindle. Unfortunately his nicely documented results aren’t as useful as they could have been because it’s unclear how the VFD was configured, what the spindle is really capable of, or how the spindle should be driven. But I took a stab at predicting how it performed anyway based on the characteristics of other 2.2kW spindles and the “accepted” K-factor for the material. 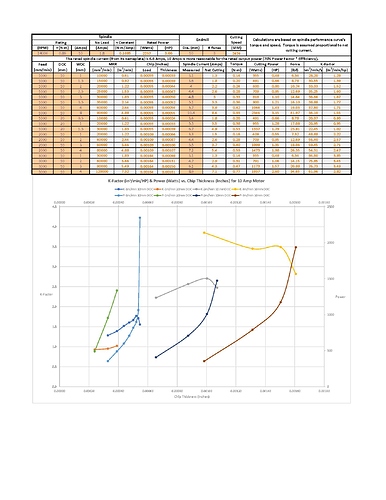 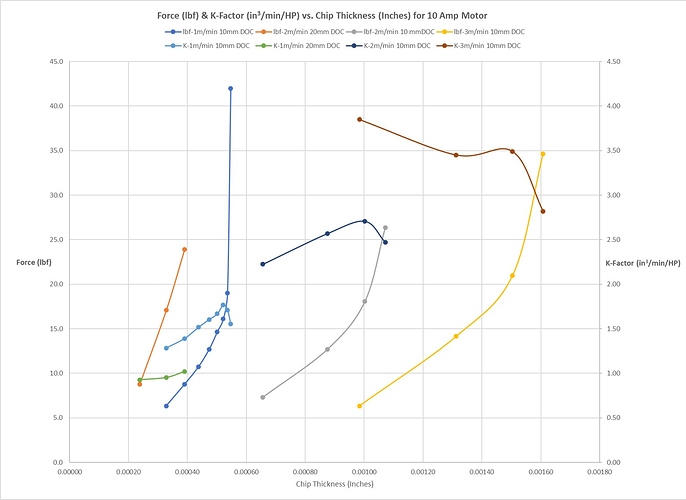 2020-06-04 Update:
OOPs - I just noticed that I intended to post this chart, instead of a duplicate of what I had already posted.
. 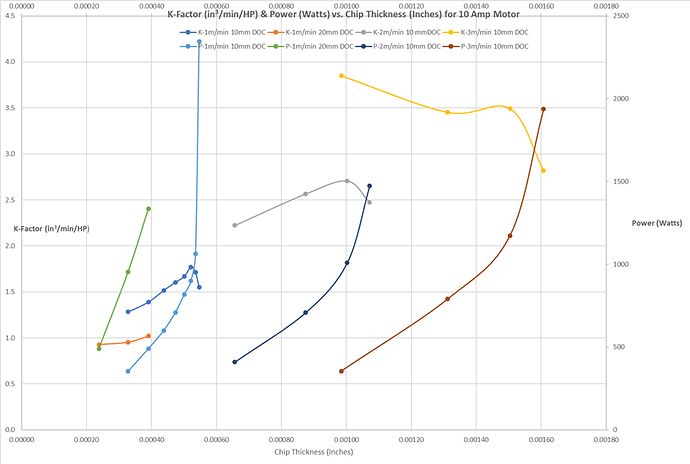 The cutting powers in that chart (column K) were calculated from the increase in motor current (torque) and spindle speed when cutting as shown on the left side of the spreadsheet segment shown below. The right spreadsheet segment shows pretty good correlation with power calculated from motor input current and motor voltage for the assumed power factor and motor efficiency (column R). 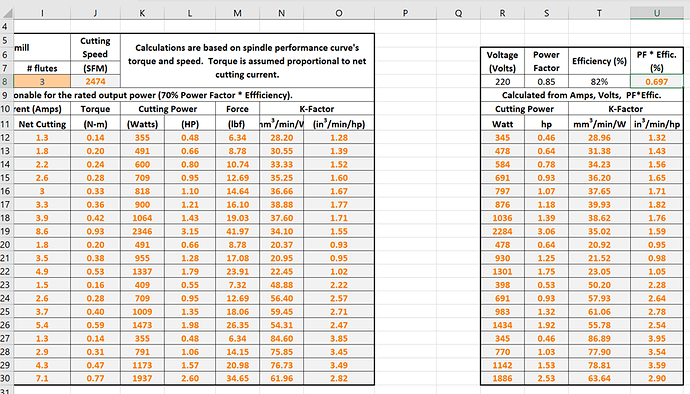