Good Afternoon! I have a noob question regarding V Carving with my Shapeoko XXL. I’ve tried quite a few different fonts and test cuts with the #301 60 Degree V Bit, and I seem to get the same result each time. The issue seems to be inconsistent straight lines in various spots of the text. The simulation picture in Carbide Create looks great before cutting! I’ve attached a picture showing a recent test I did of the number 2019, and as you can see, in certain corners and straight runs, the lines are just off. Would this be an issue with a loose Z axis? I wanted to see if I could get some feedback before fooling with the machine. Thanks in advance! 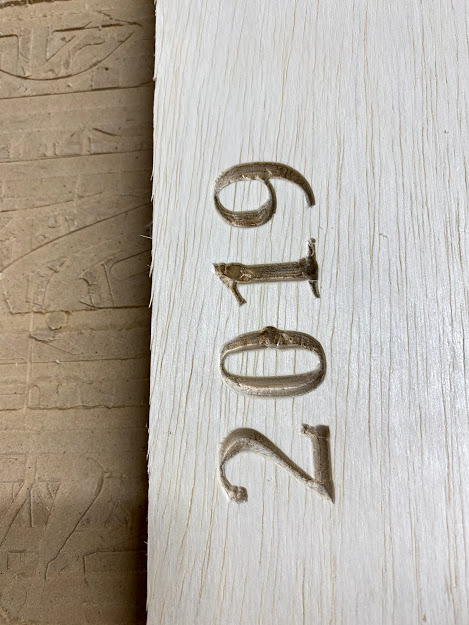 It’s probably a mechanical thing, indeed. Check that you don’t have slop in the router: with the machine turned on, grab the router by the collet/bit and try to wiggle it a little, left/right, front/back, up/down.
If you feel any slop, you should probably check your eccentric nuts (none of the top and bottom wheels should spin freely), and the tension of your Z-belt.

Also share your feeds and speeds, for a quick double check that they are not unreasonable for Vcarving.

Thanks Julien for the quick response! After posting this, I did indeed wiggle the router and had some slop. I tightened up one of the wheels with the nut on the opposite side, and that seemed to pull everything together tight. I’m running another quick test to see if that helped out. Also, here are the speeds and feeds that were used (automatically set by Carbide Create)
Spindle Speed: 7639
Feed Rate: 15.279
Plunge Rate: 3.82

(EDIT UPDATE)
So I ran a another test after tightening everything up, and the cuts do looks a lot cleaner, however now I seem to have double points, or half stars at the ends of each letter. This was an issue I was having in the past as well. I’ve attached a photo as well. 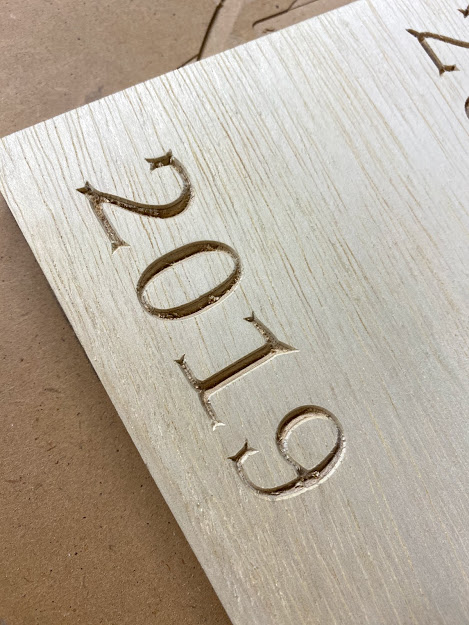 Great, let us know how it turns out!

Quick note about those feeds and speeds: older versions of Carbide Create have this annoying bug that they automatically select an RPM value that is not suitable for Shapeokos (7639 RPM is impossible to achieve on your trim router, the min is around 12.000 with the CCR). Which also means that you were probably using a different RPM in reality on your router (what was your dial at ?), and therefore the feedrate that CC programmed is suboptimal (not bad enough that you can’t get a good cut, but not great either).

They have fixed that in recent versions of CC, so you may want to install the latest version, it will at least guarantee that no RPM under 10.000RPM shows up in the default feeds and speeds, if “Shapeoko” is selected in the setup menu.

About those pointy ends: it’s either the angle of the Vbit being declared incorrectly in CC, or a problem in zeroing on the top surface. Since #301 is a 90deg Vbit and you mentioned 60deg, any chance you might have selected the wrong Vbit ?

Awesome. I’m downloading the most recent version now. My dial was actually set to 3 on the spindle when I ran this test. I do think I chose #301 as well so that may have been the issue with the ends! It does look like the feeds and speeds have updated as now I am getting the following:
Feedrate: 45
Plungerate: 12
RPM: 18000
So would I set the spindle dial to just about 2 then for this RPM? (Sorry still learning the ins and outs of everything!)
Going to run another test now!

To get ~18.000RPM on the Makita you need to set your dial around 3, I think it should be about the same on the Carbide Compact Router, maybe @luc.onthego can confirm, I don’t have this router and I can’t recall if someone mapped the RPMs to dial settings.

Yep, around 3 for the Makita

Also, shameless plug, if you have too much free time you can go and check this shapeoko ebook that covers the basics (and a bit more)

Thank you for all of your help! I really appreciate it. This test I’m running now seems to have all of the issues fixed!

FYI: Here are the speeds vs. dial numbers for the CCR. The two columns are advertised vs. actual measured numbers for my router:

Thanks ! I’ll add this info to the ebook, where I had captured similar tables for the Makita & DeWalt routers.