So I have vcarve pro 10 latest release. So I made a couple tool paths gave it different numbers for each tool in Vcarve. So when I went to save it saying it doesn’t support Tool changing.

So wondering if we have to hit up Vcarve to test with the shapeoko with the new bit setter to get it too work. Or does carbide need to update vcarve that they have a new bit setter. Attached pictures.

Or am I doing soming wrong here.

Check these threads with links to some post processors that will work.

Can you share it here? So Cut2D does allow you to use multiple tools in one job? What’s different about the pp from the V-carve ones?

So other post processor may work in vcarve pro. Does Carbide3d have any comment on this. I know vcarve pro isn’t their product but have they initiated contact with vcarve to look at this. I am wondering if their nomad which has been out for a while does the bit changes in vcarve. It seems besides the spindle on and off, thats now the only difference.

Just wondering if this has been shared with vcarve. I see that other Post processes may work but I hate trying when i am running production stuff. I have been using the shapeoko profile and it works.

Several of us have installed Neil’s post processor in VCarve/Aspire and it works great. Looking at another thread, Vectric is already aware of the post Processor and appear to refer people to it.

Thanks Luc for the info, nice to hear others are having luck with it. May give it a shot.
Thanks again and happy new year.

Luc,
One last question, is this correct PP you guys are using. I use inches. 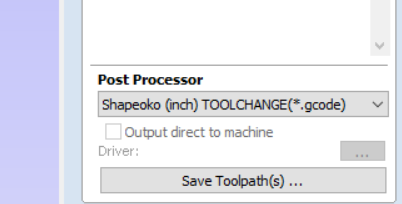 Well the title is the right one, to make sure, you should have downloaded it from Neil’s Github site posted in the other thread referenced above.
@WillAdams , I think that there should be a link in the instructions for the bitsetter to ensure people know where they can get it.

Yeap I did I followed the video posted. Testing with it now. Thank you for your help.

I didn’t see any links in the instructions for the bit setter. I just went through them installing it this afternoon though. It would be nice if they are in there so others can get these files.

Testing with it now.

Was talking with someone who reached out to Vectric about this, and they sent him @neilferreri’s old post. (The one last changed May 2018, per the history, and without enabled arc commands.) The alterations are pretty simple, so I guess Vectric didn’t think it was worth their time to redo the work themselves and make an “official” PP.

So far so good, I did a simple pocket profile test @ 0.25 depth. I used the same bit but move just moved it in the chuck when I did the bit change. I did a simple circle pocket with a squared profile with the square in the middle of the circle. So to see the how the depths would come out. The second bit change was the profile in to the circle. It looks good only thing I could see is a fraction of a ridge on the profile leading into the circle.

The vectric PP works good so far. I am going to keep messing with it. Thanks for checking in on me if I see any crazyness

Thanks Winston for the post. Hopefully vectric will see the value as hobbyist/small business are gaining speed and will be using their product more and more.

I do have one thing which isn’t bad just a though as I was using the bit setter. When changing bits, it brings it all the way forward. That cool but if you machine is close to an edge, that leads to bit dropping down and may hit the floor. I am going to have to make a bucket with sponges to catch my bits. I have the dewalt router and I have to turn the wrench with one hand and press the button with the other.

It would be nice to set where you change the bit. I would prefer over the table, middle fine. I usual put a small soft sponge below the bit to catch it.

Hey @wmoy,
Any reason you can think of to disable the use of arc commands?

This is sort of our “1.0” pass at the BitSetter implementation, and we’re open to feedback. If there’s enough interest in an option like this we will consider it, just let Rob know. Between you and me, I’m in favor of having this option as well…

@neilferreri The only reason not to use arcs IMO is if it trips the arc errors we were having from gcode out of Fusion. Not sure about how Vectric does it, but if you can ensure 5-6 decimal precision in the exported coordinates, it should be fine.

I am getting the same error. I’m continuing to read through the posts. So TIA.

The new version of CM that enables BitSetter is great except for a few things. I wish that it did not go to the middle just as you initialize the machine, it should wait to be asked to. This is annoying when you are trying to get your project ready and the gantry is in the way. When you finish the project the gantry goes SW. If you turn off the machine, it will go to the SE to the homing position which is probably the most out of the way location that lets you install a workpiece without having the spindle in your work area but now instead of staying there, it moves to the middle right away. The only workaround is to move the spindle by hand before starting the controller which is not best practice.

Another annoying thing with the latest version of CM is that the default speed is 0.01mm instead of Fast the way it used to.

Finally, the file size limitation will become more of an issue for projects where you have 3D work and the roughing and finish toolpaths are in the same file.

I use Vcarve pro also .what is enabled arc commands all about
Jeff Peters

I am sure that some one under stood what you are talking about but some one with no g code knowledge
none of that made any sense to me Sounds to me like the bitsetter is still in the testing stages.
Jeff

Er… That last thing I said about gcode and arcs had nothing to do with the BitSetter. It was more about getting Vectric to work optimally.

There are certainly things we can improve with the BitSetter workflow, but those will be refined over time as we all collectively learn more. No different than any new consumer tech product. Calling it beta is a bit harsh…

what is enabled arc commands

Those are disabled in the current version… Pending further testing.
GRBL takes arcs and breaks then up into small, straight line segments. This can be done on the fly, by the controller, or it can be done by the program that generates the gcode. The V-carve posts for grbl based machines have had arcs disabled (line segments generated by V-carve) for several years. I thought I’d try to enable them. Someone reported an arc error, so I disabled them again until I get a chance to test.
The post processors, as they are now, have been tested and proven to work with the BitSetter and Carbide Motion.

Sounds to me like the bitsetter is still in the testing stages.

The BitSetter is a well thought out piece of hardware, but it’s essentially a probe. It has one job and it performs it well. There are nearly as many workflows as there are users and there are a lot of ways to do things incorrectly. Carbide 3D, with Carbide Motion, tries to minimize the ways any user can do something incorrectly. That will always be a work in progress.