You give me “Cat Scratch Fever”.

Roof finial for a client. I considered trying to make it out of sheet metal as it was done originally (last photo)… but the Shapeoko kept whispering in my ear 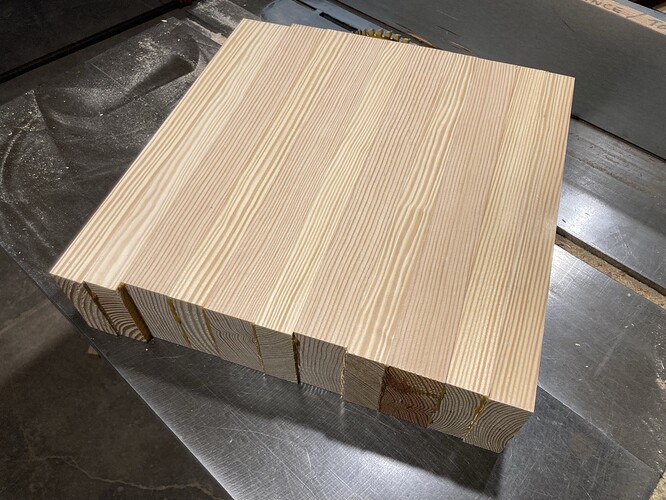 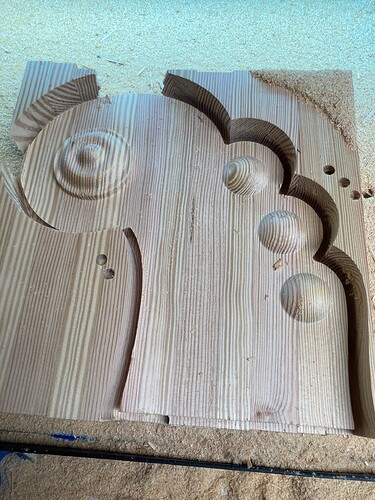 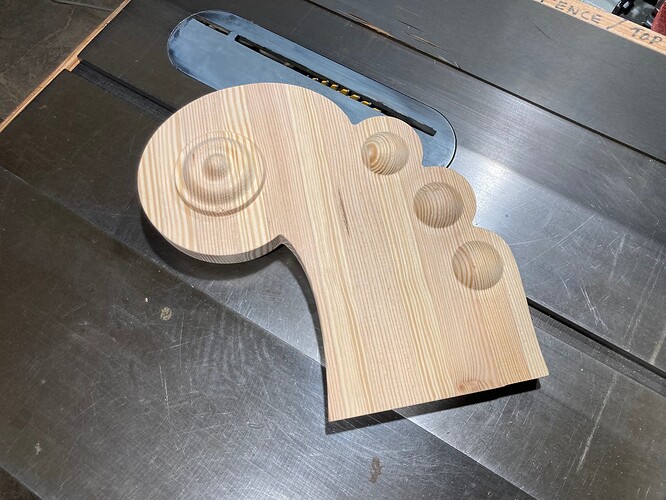 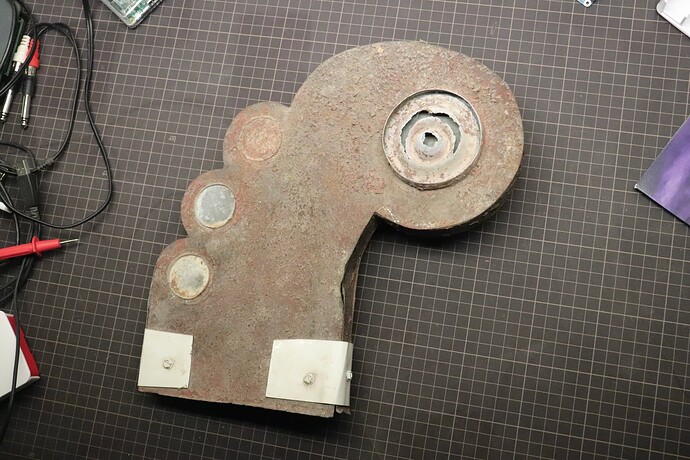 A couple things I’ve cut over the past few weeks… 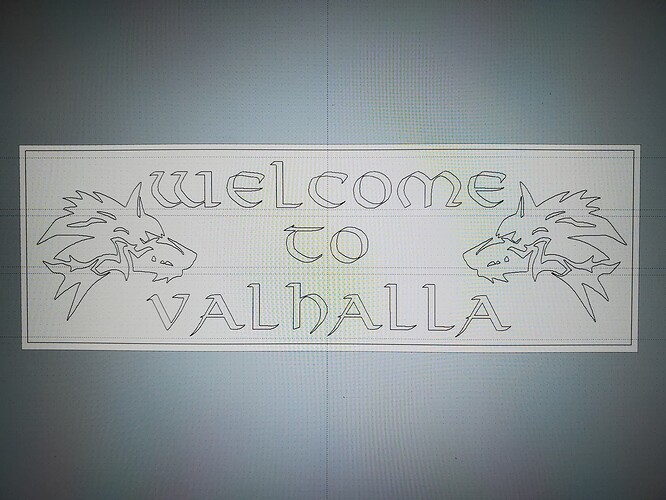 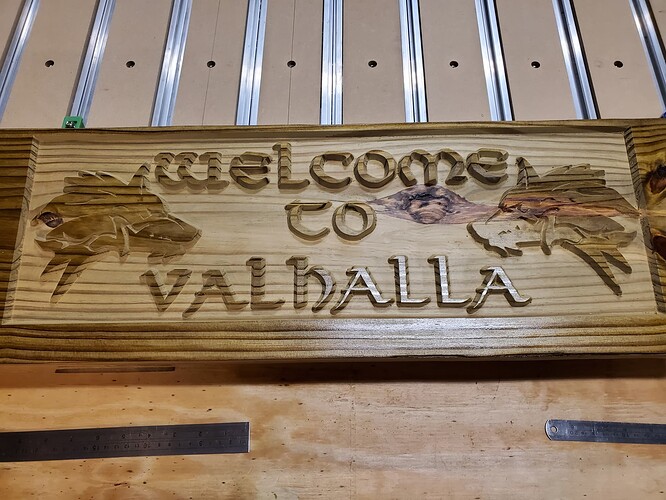 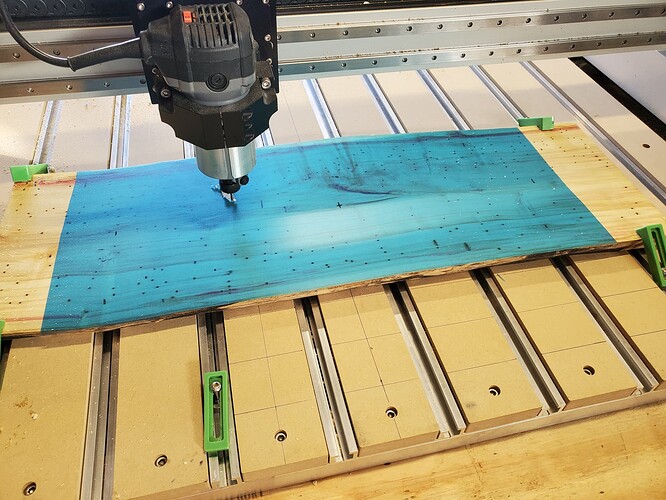 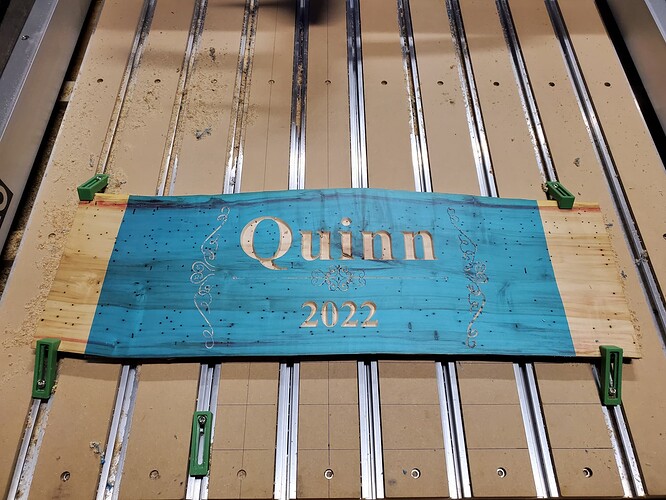 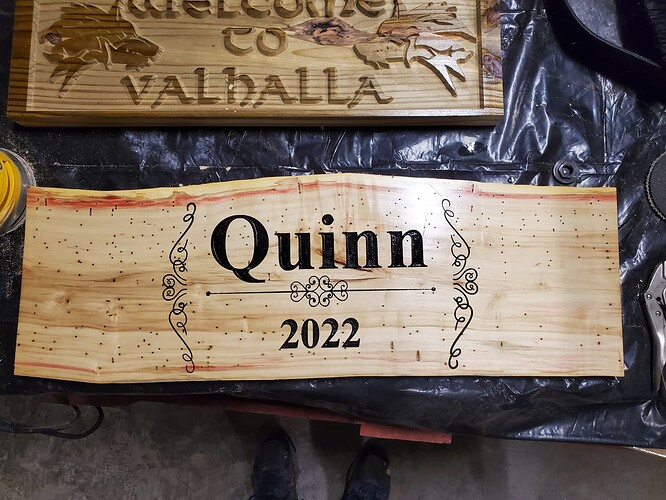 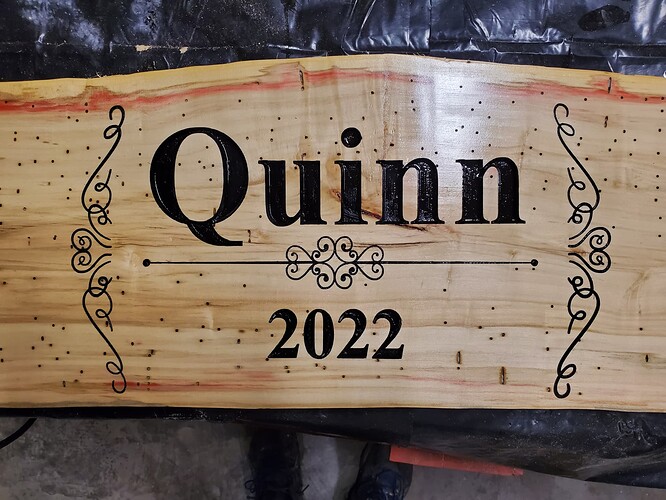 Question: I’ll be using maybe maple and walnut, over time as they are two different woods will one shrink faster than the other one thus leaving gaps ?

Yes and mostly no**

If I was building a table top attached to a rigid frame, I would attach it in a way to allow for the ~1/8” total change across the width (assuming long side was with the grain and short side was cross grain) of a 36” table.

If there were two different woods with slightly different rates of expansion/contraction, one might take up 9/64” and the other 7/64” (for that same total 1/8” change) Would the 1/64 difference between the two across a 36” width be noticeable to someone sitting at the head of the table? Probably.

Across a 18” charcuterie board, it would be more like 1/128”. Hard to see and would be felt with fingers across the seam.

On a 4” coaster? Unnoticeable.

On a 36” sign on a wall instead of table end? unnoticeable.

** I might be worried if I was going across the grain but still probably not. Worst case of female (pocket) piece being face grain and male (inlay) piece being end grain, I might worry about the different directions of expansion and contractions pushing against the v edges causing the inlay to pop out of the pocket by that same 1/128” (for and 18” length.) If that was to happen, it would be more noticeable than a seam. Then again, coaster, serving board, table, or wall sign use all change how someone may or may not see it.

If glued properly no. Glue bond is stronger than wood.

Ed great work man would like to pick your brain I am in Rio Ranch. What Cam set up are you using Im looking to go into Fusion do you have any experience with it?

All my CAM work is done with CC Pro. The knife box’s started out as a photo of the actual knife, imported to CC pro, traced with the new tracing tool then cleaned up a bit with node editing. Various measurements of the handle and blade were taken and Pro made the model.

My aluminum “baptism by fire”, so to speak: 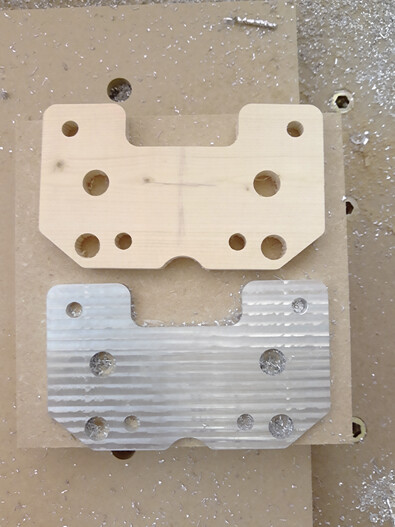 This was prompted by my need to install the Makita router in a higher position than the normal clamping position. I found that it was jamming against the Z-axis motor mount on the Z-Plus, so I decided to make a spacer.

The wood prototype was a breeze. The aluminum on the other hand was an order of magnitude more difficult and gave me some appreciation of what you guys go through who do large parts in metal. I want to share that, in case anyone had the slightest bit of uncertainty, no, you can’t use a downcut endmill on aluminum (I tried as my 1/8" single flute was too short to reach until I made a 1.5" platform to bring the part up to the router). 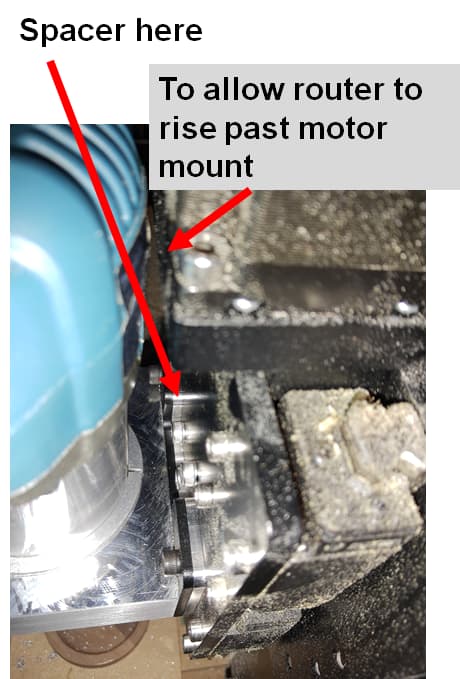 I made mine 3.7 mm thick, but probably 1.5-2 mm thick is all you need, if you have access to thinner stock than the 1/4" aluminum I used. The 12 mm long M5 bolts I bought had a 3.7 mm length difference compared to the stock ones, so 3.7 mm seemed like a good safe thickness to attempt.

I found that it was jamming against the Z-axis motor mount on the Z-Plus, so I decided to make a spacer.

Wait, you mean C3D wouldn’t fix a problem like this under warranty? I find that hard to believe.

He is using a 3rd party router, why should they warranty it?

I’m not sure if this is sarcastic or not.

I would have guessed the Carbide3D router to have the same exterior form factor so would have the same issue. It is a bit of a downer because if the aluminum clamping block was just a tiny bit bigger, it would not have been an issue. But to be clear what I was doing is a bit unusual. I’m trying to installing a 4" overall length endmill with as much reach beyond the collet as I can get away with, so in order for the endmill to clear the part at max Z, I need to raise up the router in the clamp mount by quite a bit. There is normally some distance you can raise up the router, but if you bring it up far enough the motor mount has interference with the router.

Makita is not different than C3D router. One might say they are “exactly” alike.

But to be clear what I was doing is a bit unusual.

I see says the blind man! However, that does sound like something you should report so they can look into it. (Even if you’ve already found a solution.)

PS. I wasn’t being sarcastic.

Makita is not different than C3D router. One might say they are “exactly” alike.

and of course, the CCR having a warranty honoured by Carbide 3D.

Not to mention, spinning up a 4" long bit is not officially recommended. They have the potential of instantly disappearing at a high rate of speed if they break while cutting. I don’t think a friend of mine ever found the bit that he lost that way.

I had been wanting to have a tray for my CNC bits and tools.
I finally made one. I left a little room for anything additional I may add.
I use the 251 Bit to clear larger areas. Then the 201 Bit for for Bit Pockets for the .125 corners. Lastly, I used a 20 degree V-Bit for the engraved lettering. It is on a 2X8 board. For shop use I see no reason for fancy finishing. 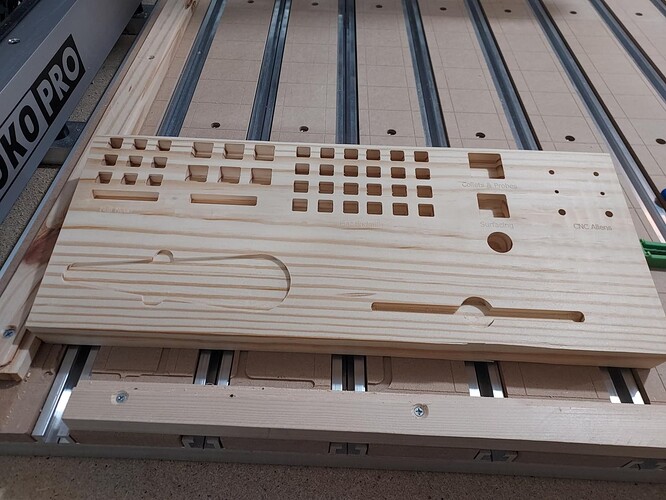 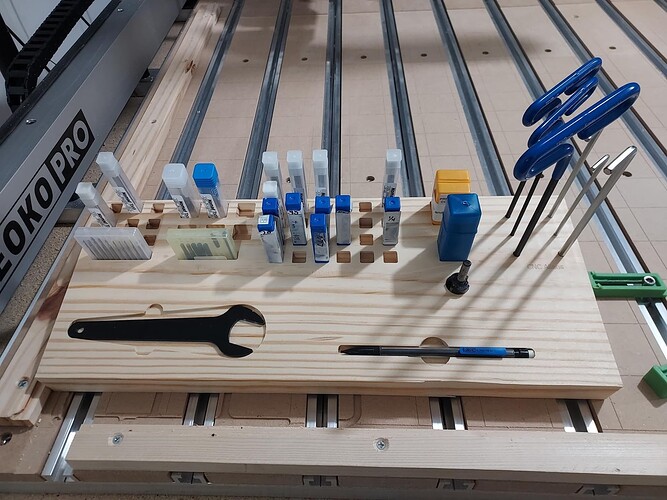 I had added labels using Advanced Vcarve. I just notice the Engraving selection for Bit selection. What difference would that have made? Or is there no difference other that the wording?

I see great work we will have to connect in the you in the future!

Cool spacer! I want to cut aluminum or brass but have not yet. Very professional looking. Most of what’s under that plastic part of the router is just air, so I ran mine across the table saw a few times to add the clearance. Better ventilation?

Engraving is for tools listed as engravers such as the MC Etcher when used in materials capable of taking the sort of fine detail which the engraving tools incise — for wood a V carving toolpath would be better.