I’ve been thinking of upgrading my waste board for awhile now. Aluminum is not in my budget. Has anyone done poured epoxy/something similar for a waste board?

This video gave me some ideas:

I have quartz countertops - if I understand it right it is made very similar to epoxy granite. Anyone know if the flatness of standard quartz would be sufficient for my SO3?

Interesting idea. I have seen a few posts here with people daydreaming about using epoxy granite, but no actual example of anyone doing it on their Shapeoko (I may have missed it). And that was for filling the extrusions, not for a wasteboard. So I guess that would be a first.

I was wondering whether epoxy would actually be cheaper than aluminium, and sure enough it would be (XXL wasteboard = 40"x44"x3/4" = around 22 liters, so probably around 300$ worth of epoxy resin, but probably much less than that considering it’s mostly sand/gravel)

Flatness should not matter too much I think, since you will have to use a supplementary wasteboard on top, and you would surface that anyway. An epoxy granite bed would hardly qualify as a "waste"board

The tricky part I guess would be to hold threaded inserts (or something similar) at the right places before pouring the granite/epoxy mix, to be able to later attach the wasteboard to the frame, and the secondary wasteboard on top.

Reusing a quartz countertop: another interesting idea if you have a way to cut it to the right size, and if the thickness is right ? Countertops tend to be quite thick ?

Anyway, if you proceed down that road let us know how it goes !

I think the weight and stability of a single slab would be a big improvement over the 2 pieces of mdf. You’re right about the flatness - I currently have a piece of 3/4 mdf attached to the top of the factory bed as a sacrificial waste board thats held down with 4 bolts. I use tape for work holding so that won’t be an issue.

So now my question is would this be a worth while upgrade? Would the epoxy or quartz sag over time like mdf?

If sagging is the concern, I think you could first (if not already done) just install a reinforcment point under the middle of the MDF bed, that’s a common issue and apparently many XL/XXL owners have solved it with a simple nut and bolt placed there.

There is also the option of losing the feet and resting the bed directly on a flat surface (which I did on my SO3 back when I still had an MDF wasteboard, it was definitely an improvement)

These 2 steps are basically free, so worth trying anyway?

There’s still the problem that MDF absorbs humidity, which can lead to subtle geometry changes over the year, while epoxy/quartz/aluminium don’t have this problem.

The question of whether it is worthwhile really depends on what you are trying to achieve. Unless you want to mill high-precision metal pieces, I think a properly supported MDF bed goes a long way. I have literally no idea what rigidity you could expect from an epoxy bed, but it would make for a fun project

As long as the surface you set your epoxy/ granite form on is level your surface will be level.

There are two issues I’d worry about.

2.) The increased density and abrasiveness of the epoxy/ sand/ stone mix would damage your bits on contact.

How do you attach something to the Granite/Quartz except for tape and glue?

I’d secure piece of mdf with clamps and drill the holes with your cnc, which later would be used as a guide to manually drill holes for the inserts. You can glue them in with epoxy and attach supplementary wasteboard. Lol at least that’s what I’m planning on doing once I’ll decide to build another cnc hehe

How do you attach something to the Granite/Quartz except for tape and glue?

I’m considering and able (knowledgeable about pouring epoxy table tops) to take on this project when it comes time to re-due my current supplementary WB; but I’m looking for a sounding board on how worth it this really is… My primary question is how much more ridged would a sand + epoxy solution be over MDF and the synthetic adhesive and pressure they use to manufacture…

so probably around 300$ worth of epoxy resin, but probably much less than that considering it’s mostly sand/gravel

I’ve poured a decent amount of epoxy river tables; they are usually greater than 1" in thickness… and unless you want to pour 1/4" at a time and layer 3x to the desired 3/4" thickness the cheaper thin-set epoxies aren’t really worth the lower cost and added difficulty; IMHO. Ergo…

So for a quality thickset epoxy figure $100 per gallon. At an 80% sand (or plaster of paris) to 20% epoxy ratio (by weight) and a thickset epoxy that is still going to be $250-300 in epoxy. Then add in the cost of melamine to make your mold; a bunch of tuck tape/mold release, silicone/caulk, some clever way to create the attachment holes for the frame and mounting points for a supplementary, … and I’m ball-parking around $425.

So for $300ish less we have a lighter-weight solution, that provides more vibration dampening, but is more difficult to affix anything and the elephant in the room question… is it that much more ridge than the stock MDF?

That would be for a drilled and tapped version. Since you’re drilling holes anyway, Aluminum tool plate will cost closer to the epoxy cost. 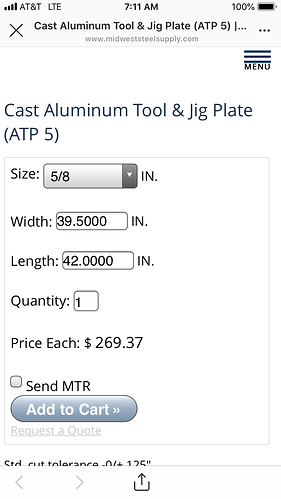 Can’t beat this price. Personally I don’t need a bunch of holes for work holding, as I will be using the aluminum as the “bed” and a sheet of mdf as a waste board.

That would be for a drilled and tapped version.

Thanks, I just started going down the rabbit hole of drilling and tapping holes with the shapeoko.

Agree, same material as the Amazon version, the cut tolerance of 1/8” is a bit worrisome, how close to dims was what you ordered?

I haven’t ordered mine yet. Here’s where I got my info: https://www.instagram.com/p/B5JpVWegmVV/?igshid=jjbdchsupo3a

He’s a great guy answered all my questions in a DM.

cut tolerance of 1/8” is a bit worrisome

They usually do -0/+.125, so it’ll only be bigger than what you specify. The C3D wasteboard / machine base has some wiggle room. WHEN I get a chance to do this, I will only drill holes to attach to the frame then mill and tap (probably by hand) holes just to add a supplementary wasteboard.

Thinking through this too… my feelings are it would be tough to drill and thread them with the spindle because of the amount of -Z required to get to the bottom of the waste board and the amount of deflection that would be generated on a bit hanging well below the collet. Is that where your head is at?

I think I could mill the holes which is nice to keep them square to the machine, but I’ve never done thread milling and the endmills aren’t cheap. Tapping a handful of holes by hand in aluminum wouldn’t be bad.

You could drill the holes too.