A few weeks with the XXL Pro

It’s been a few months since my trusty SO3 found a new home (at my nephew’s) and a few weeks since I upgraded to the XXL Pro, I figured I would share a few thoughts and pics with the community, just because. 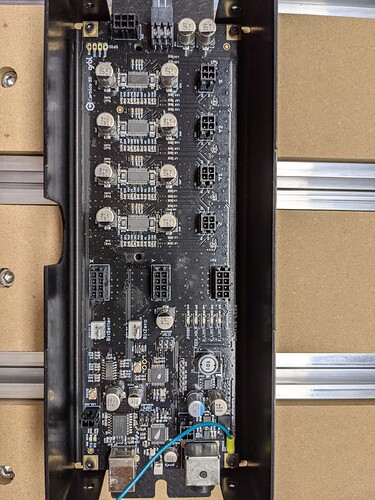 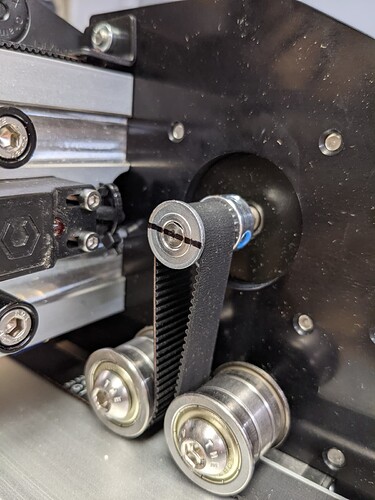 (yes, that’s about 10x more blue loctite than I should have used, but that set screw is not going anywhere

While waiting for the Pro to arrive I built an enclosure, using the lessons learned from building several ones earlier and failing in various interesting ways.

A minor fail was that I did not really anticipate how heavy two large panes of 18mm MDF and acrylic window would be, so the folding doors double up as a fitness machine to work on my upper body strength… 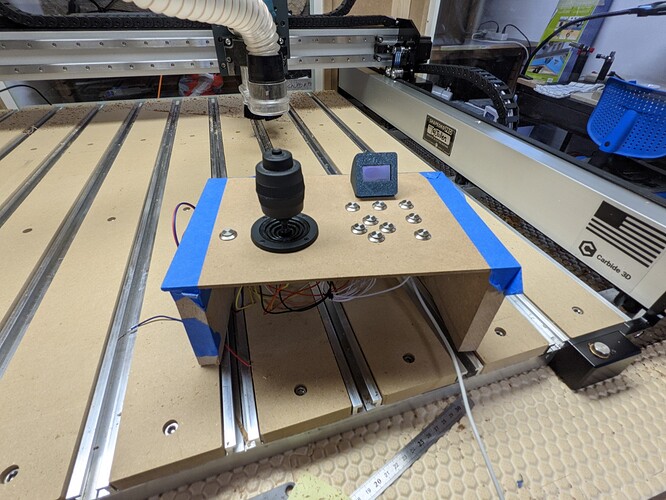 The button on the left of the joystick will be used to trigger hardware feedhold. I procured a prewired microfit 3.0 pin, inserted it in the right slot (“F”) of the Z limit switch connector, plugged the GND wire in a nearby pin header, and it works as expected. Feedhold button is the nearest one to my right, and E-stop is the nearest one on my left, when sitting in front of the machine/computer. And yes, it’s only been a few weeks but I already had to smash that E-stop button once. I called it a “validation test” obviously, rather than me doing something silly. PSA: V-carving does not work as well when the router is not started…sigh.

One thing I think I’ll do next is add side fences, because the chips that fall in there are not easy to vacuum: 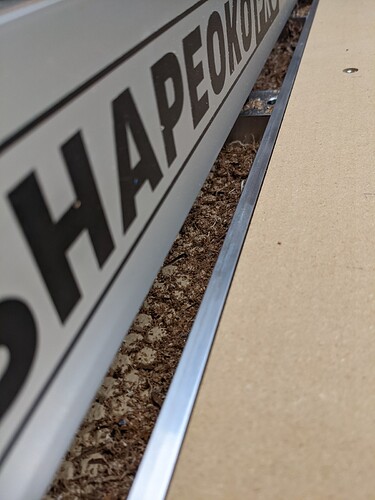 In most cases the Sweepy will prevent this from happening anyway, BUT recently I have been milling thick stock with a long endmill (more than 2" stickout), and in that situation the Sweepy cannot be lowered enough to be efficient. I hope @Luke will come up with a Z-independent dust shoe to complement the Sweepy.

Overall, you all know I am positively biased but it’s been a blast building and operating this machine so far. I had some doubts that the XXL format would be almost “too much” for the projects I usually do (no trivet-related comments please

), but instead I find myself making larger and larger projects with this newfound capacity. The HDZ is just as great as it was on my SO3. If I’m being honest, I really could have stayed with the Z-plus, but it’s one of those things where once you have had a taste of something great, it’s difficult to downgrade. Like using a trim router again when you enjoyed the quietness of a water-cooled spindle. I know what’s on my list for Santa this year…

In the meantime, I’ll try and fill as many bucket-o-chips as I can, to catch up on my very long list of projects I had on the backburner.

~“When you survive the world’s worst pandemic in 100 years, you deserve nothing but the best -ProSlippageDetectorDeluxe2021™” ~

Great write-up, Julien. Thanks for sharing! Nice new workspace, too.

Sweeeeeeeeeeet! I need to revisit that code / just use yours

One thing that I’ve yet to do is have the pendant binary auto-start, handle disconnects, etc. #OnTheList

I think I’ll do next is add side fences

Such a good idea - have I missed a post where someone has uploaded a solution for this?

On my SO3 I did this

I would be curious to see what model of cooled router you will take … maybe I’ll be tempted too.

Nice setup @Julien , and sorry, I still haven’t made any progress on the joystick. I don’t take the time to learn how to use the Arduino. (I’m a noob ;))

I started working on a joystick-based jog panel too (technical details in this thread , I’m basically forking @mingle’s code). Ugly prototype below, eventually this panel will go on the front right of the enclosure.

Pretty much any USB device can be used as a jog pendant, it’s the software involved and desired capabilities that differentiates the options.

To expand on Julien’s answer. There are a couple of options: On my SO3 I did this

I just went out to my machine and realised that a 1/2 inch thick piece of mdf fits in the channel perfectly. I think that’s the solution I’m going to go for.

May have missed it, but what is the fate of the trusty ol’ SO3?

I gave it to my nephew (he’s an apprentice in a small woodworking/construction company, I figured he would catch the CNC bug and envoy it)

Hi I am glad to se that there is a XXL Pro user here now .
That can answer some question’s I also Have the Pro and can attest to how easy it was to set up and everything came out square. Just need to find the tool changer file of Neils to download into Vcarvre Pro11 Jeff Peters

Click on the one which you want to use:

Save the file locally. 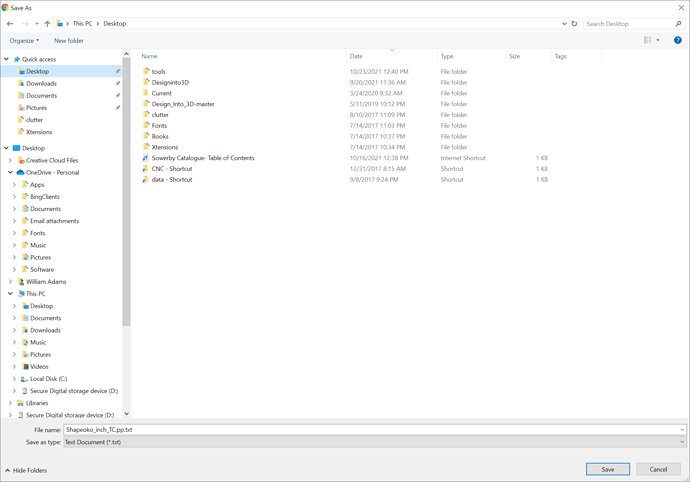 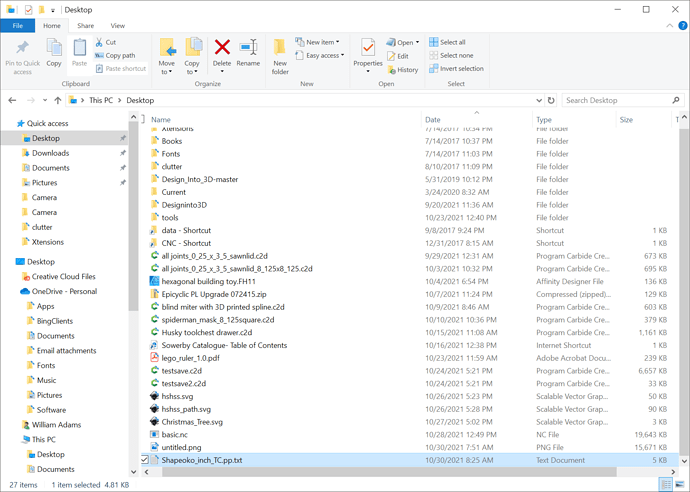 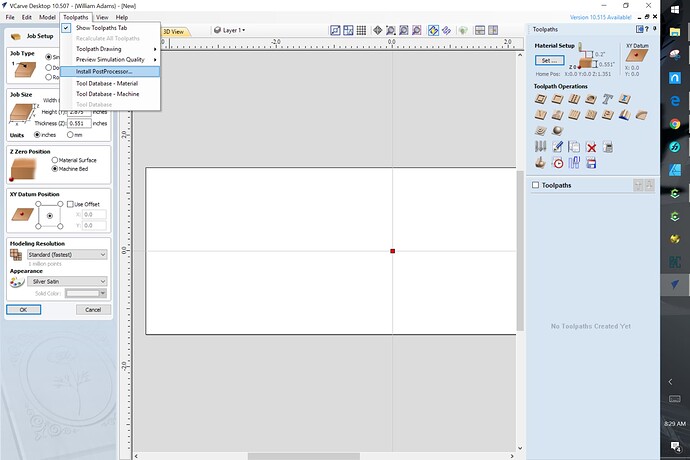 Navigate to where you have the renamed post-processor: 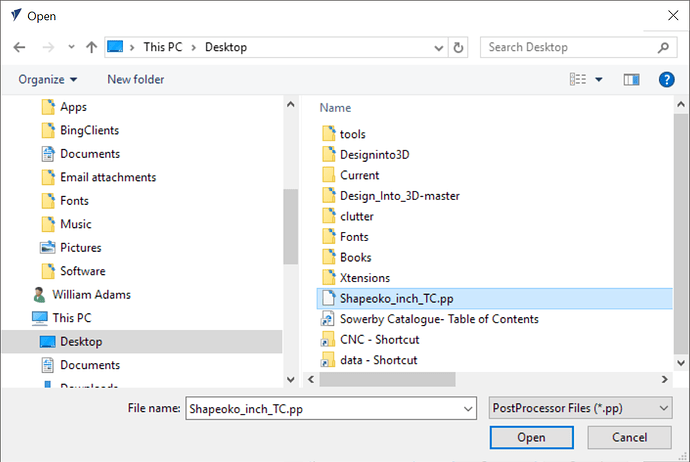 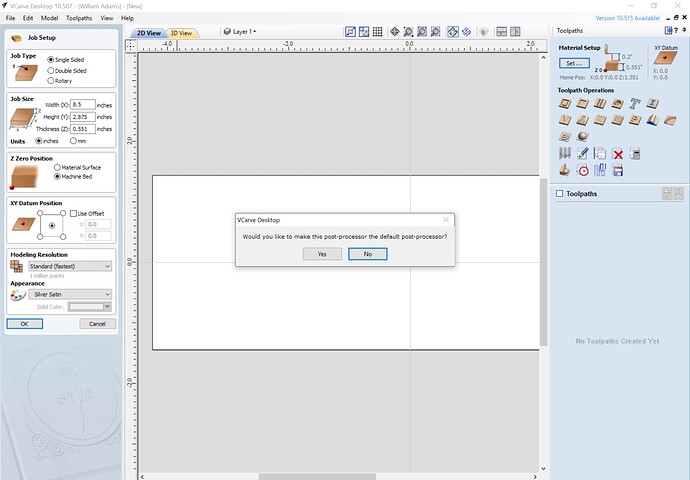