Have anyone considered the 15mm wide GT2 belts? And what could be the downside?

15mm wouldn’t fit on the existing pulleys, so you’d have to make some extra changes.

Yes you have to do more then belt change. But it would be a more simple task than ballscrew. It would even out the flex in x and y axis?

I expect going to 15mm from 9mm would give you about 9/15 the amount of stretch. I did try 10mm belts and saw about a 10% improvement, in line with that.

I don’t know if the drawbacks from 15mm will be noticeable. Increased belt mass, backlash, maybe other things? Maybe it’ll be fine.

I would be willing to send a length of gt3 to you, @The_real_janderson , if you want to test it on your equipment. I am a little swamped right now with things outside the shop to devote any real time to it right now, and I much rather have the community get some “legit” numbers on them. Just let me know and I will send it.

Yeah, I could totally do that, although just letting you know that it will be at least a month or maybe two before I don’t have access to the machine currently.

I figured that would be the case. No worries, just pm me your address at some point and I will send it over along with a length of some extra fiberglass core gt2 I have laying around (sourced from amazon almost a year ago). It might be interesting to see how it stacks up to the other gt2 that has been tested.

And have no worries about the COVID monster. Everything will be sanitized, including the box, before pick up by USPS. I’m not trying to disrespect anyone’s fear/feelings about this crap or put anyone at jeopardy.

Thanks guys! These real-world measurements are very useful!!!

I got my sample Gates GT3 belt finally from the UK supplier and improvised a stretch test against a vertical surface to compare the Gates to the original stretchy belts from my Shapeoko (pre steel belt changeover).

My ‘base’ measurement is reasonably close to the 0.4% that the_real_janderson measured for that type of belt in a proper rig so I’m reasonably confident in the comparison that the Gates GT3 is no better than the 0.2% recorded for the Kevlar or Steel cored belts, in fact it looks a little stretchier. 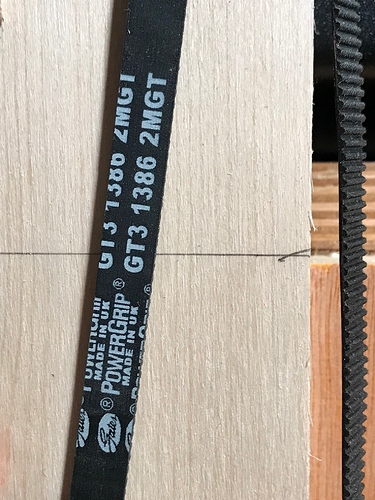 Don’t you know only the Chinese can make good belts, at least that is what they told me. I am sure seeing “Made in the UK” made you proud and it should. I hope the US has woken up to the fact that we need to make things here. Let China make all the plastic food containers they want but high tech needs to be made in the country that will use it.

Nope, I just left it hanging for 24 hours with the 12.5kg total weight applied to see if the stretch was greater in a new belt and whether it would change after being left under tension, figured that was fair to the belt. It didn’t, within the rather limited precision of my measurements at least.

I was comparing with the_real_janderson’s graph above “Strain Induced in 9mm GT2 Timing Belts” as that gave me a reasonable force to test at and comparison points, not sure if that’s the best choice.

The strain recorded on the chart for Polyester looks to be around 0.45% at around 20lbs-f and around 0.25% for Steel and Kevlar.

Given the improvised nature of my measurement rig I think I can say;
a) The measured values seem reasonable compared to the measurements performed on a proper machine, the values are in the range expected
b) The measured values seem to be lower in my case, but this is easily attributable to poor precision and resolution in my measurement, perhaps I have a slightly less stretchy Polyester belt?
c) The Gates GT3 was around 50% to 60% of the stretch of the old Polyester belt, thus putting it in a very similar range to the Steel and Kevlar cored belts

No, you just confused me with this statement.

They may be, what we don’t know yet is how well they hold up and whether they show better lifetime and failure behaviour than the steel or kevlar cored belts which they may.

In the meantime, I’m not in any rush to take the cheaper Kevlar cored belts off mine, or wait another 2 weeks for delivery from the only UK supplier I could find for the other two belts I’d need for the Y axes.