"Helix Angles— What Role Do They Play?
Standard end mills are offered with helix angles as low as 15° to as high as 60° angles. General-purpose end mills are generally around 30°. Any increase in the helix angle increases the effective shearing action thus reducing cutting forces and the amount of heat generated during the milling process. Chip ejection is also improved. Lower helix angle end mills are used on more difficult to machine materials where maximum edge strength and rigidity are important.

With straight flutes the load builds up almost instantaneously, making the end mills prone to self excited chatter. With helix angles, chip load is applied to the entire flute length in a progressive siding action similar to that of a snowplow with its blade angled off to one side. This makes the cutting forces much more constant with less chance for chatter. End mills with a higher helix also tend to produce much better work piece finishes. The 50° and higher helix angles significantly reduce side loading on the mill making it possible to periphery mill thin wall sections with much less deflection."

“When using an endmill with a high helix (above 50°) the material engages that helix and creates an axial force that tries to pull the tool out of the holder. The higher the helix angle the more axial force is created, and the possibility of pullout is increased.”

So, shouldn’t matching the side milling axial depth of cut to fully engage one edge of the cutter optimize performance?

It seems logical to want to keep a constant cutting force rather than a rapidly varying force. OTOH, I seem to get a lot less top surface damage with lower helix upcuts meaning I can leave less stock to come back and clean up with the compression cutter.

The Carbide cutters 201 etc. seem to be quite carefully chosen as low vibration cutters with lots of flute and relatively steep helix angles.

One other thing to careful with on low helix or low flute count cutters; if you’re using the bitzero you need to be quite careful to rotate the cutter so that the true perimeter is measured when it touches off on the X and Y.

This also depends on the material. A high helix is helpful on aluminum for evacuating chips from the cut, but is more prone to chatter (so slow down

). If you look at things like a chucking reamer (totally straight flutes), these are intended for very low speeds in round holes, not endmill like cuts.

Keep in mind we don’t have the kinds of machines where we can take high chipload side milling cuts - you can, to some extent, but it’s not where these machines are typically happy. Trying to take advantage of the whole inch of side milling is pretty hard to do (without going so slow you may as well have not done so and just used multiple passes).

That’s probably why most woodworking router bits have straight cutters.

high helix is helpful on aluminum for evacuating chips from the cut, but is more prone to chatter

My understanding is that it should be less prone to chatter.

I have been using 45 degree helix TiCN end mills for a month now but I have to confess I have wimped out and only done a maximum 1 mm DOC on adaptive on 6061T6 with decent results. One day when I am feeling more reckless perhaps.

Lets add some variable flutage to the discussion. I use a three flute 1/8 stubby VFA and it rips well if given appropriate chip evacuation area. Its cut anywhere from 8-100% flute length and 10-95% diameter depending on the needs.

Does “reduced side loading” = increased axial loading? I mean, nothing disappears, it just gets transferred in a different direction right?

Does “reduced side loading” = increased axial loading? I mean, nothing disappears, it just gets transferred in a different direction right?

That’s a good question, I kind of thought that too until I saw the linked snow plow analogy and started thinking about helical cutter heads in jointers and planers and hand planing at an angle.

My understanding is that it should be less prone to chatter.

It’s more towards the reamer end of the spectrum, so no, more chatter. That said, the material is software, the frequencies are different. It’s a lot like a saw blade - you want multiple teeth engaged (flutes) - more flutes = more better, but in something soft like aluminum, chip clearance is a huge deal, so bigger gullets are needed…so fewer flutes helps on that side more. The reason a reamer doesn’t chatter is because most of it’s flutes are always engaged.

If the balance was easy to find, there wouldn’t be hundreds of different flute/gullet/helix angle/coating materials, and cutting edge geometries, with each vendor claiming the best.

Sure, if it’s the right material and you have the power for it. d ~ 2 is about as far as I would personally go, but I’m not a production guy chasing an extra buck by getting one more part out the door. You can slot (WOC == D) but the 100% engagement can be really chattery unless you unload it with some slower speeds. I usually use a helix entry and adaptive from there specifically to avoid a slotted entry.

It’s more towards the reamer end of the spectrum, so no, more chatter. The reason a reamer doesn’t chatter is because most of it’s flutes are always engaged.

Which is it then - more or less chatter? What’s a reamer?

chip clearance is a huge deal, so bigger gullets are needed

That is definitely true, this thing throws chips across the room and goes through the wood ridiculously fast at 22,000 RPM, I’ve no idea how big a cut it will take yet because it’s just scary and holding the workpiece solidly enough has become the issue. Plywood at 10mm DoC 5mm WoC and 2,000mm / min (0.05mm per tooth) and it wasn’t bothered. The workpiece on the other hand was vibrating despite being clamped flat on the spoilboard so maybe that 0 degree helix vibration theory… 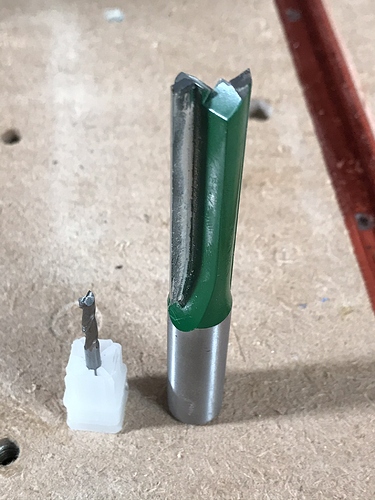 For the same size endmill, fewer flutes = bigger gullets = better clearing, but again, feed rate is different because the # of flutes is lower as well.

Which is it then - more or less chatter? What’s a reamer? 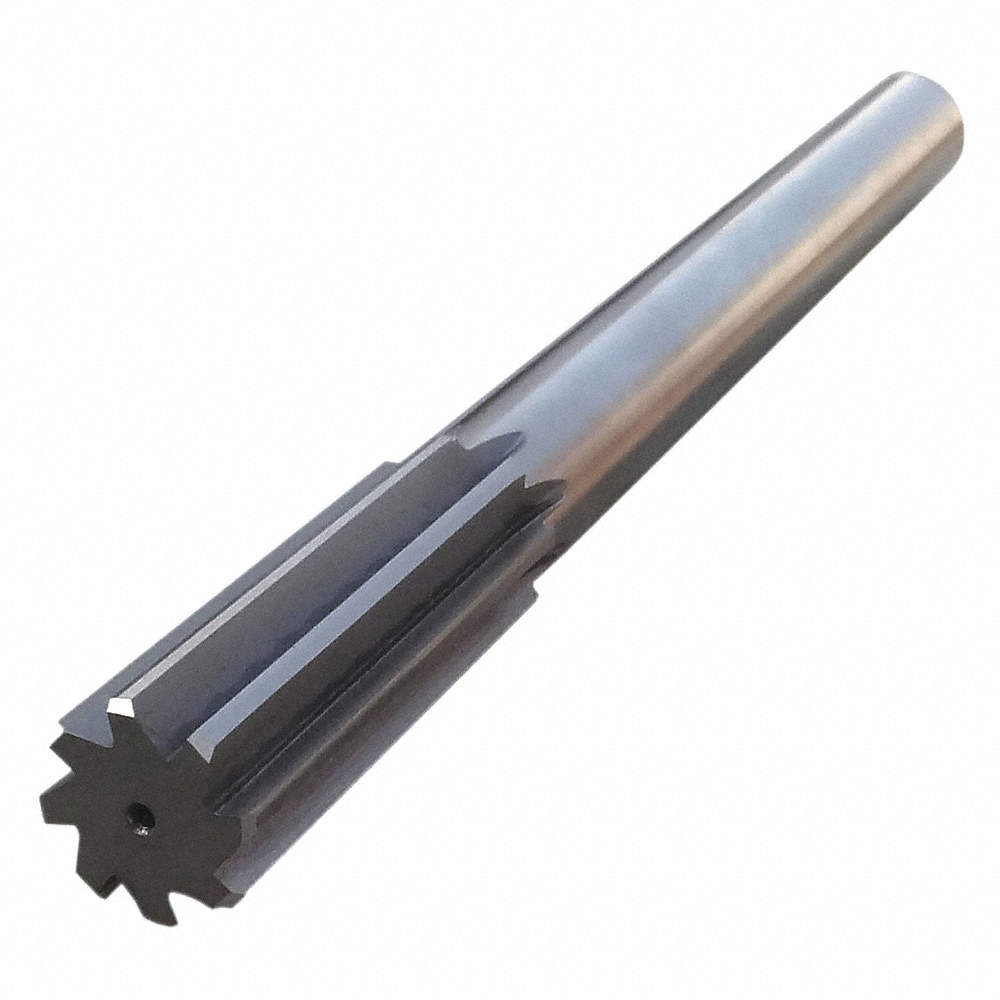 They are specifically for making drilled holes both round and on size, which a drill won’t do (they’re never accurately round, and usually undersized by a few thousandths). Note they are not end cutting.

A reamer is 100% (mostly, remember I said the whole wasn’t round until reamed) engaged with the hole, so they can’t effectively chatter, if you used one to side mill something, it would chatter like crazy. They obviously have a crazy high helix angle (ie 90 degrees).

There’s way more to chatter than just the flute arrangement and helix angle, the feed rates with the size of the overall cutter makes a huge difference - a bigger cutter is obviously (of the same material) stiffer than a small one. Less stiff = more chatter, all other things being equal. Unfortunately, we’re deep into a highly multivariate here.

That is definitely true, this thing throws chips across the room and goes through the wood ridiculously fast at 22,000 RPM

Kind-of like it would on a router table where you’d likely use 24,000 RPM for anything less than 1" diameter in the “New World” (where most router bits only have 2 flutes)? I’ll bet you didn’t get much tear-out on the faces though, right? Even if you were cutting Baltic Birch, your cutting forces probably wouldn’t have caused a router table user to slow his feed rate. 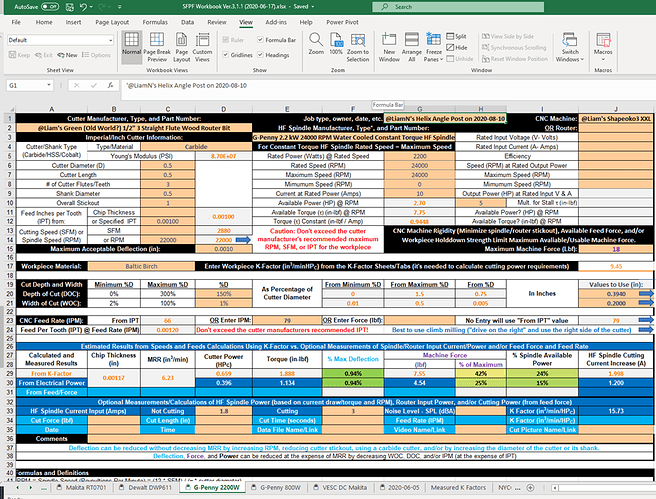 They obviously have a crazy high helix angle (ie 90 degrees).

The helix angle for your posted endmill image looks like 0 degrees to me.

There was very little tear out, a little fuzzy but the finishing pass dealt with most of that. It wasn’t super high quality ply and no, the spindle didn’t even blink. I was watching the output Amps on the HY VFD and it went from 1.9 to 2.2 during the cut so the spindle was basically idling.

This is that bit doing a slightly slower adaptive clear in a pocket;

When/how much do you sleep (assuming that you do get some sleep)?

Interesting question. And yes, you’re right, you can pick the helix angle to ensure full axial engagement even for a radially narrow cut, so that the cutting forces are essentially constant. Here’s some data:

Forces (Newton) for one revolution for the SECO JH40060, which has a very sharp edge at low helix angle (25 degree): 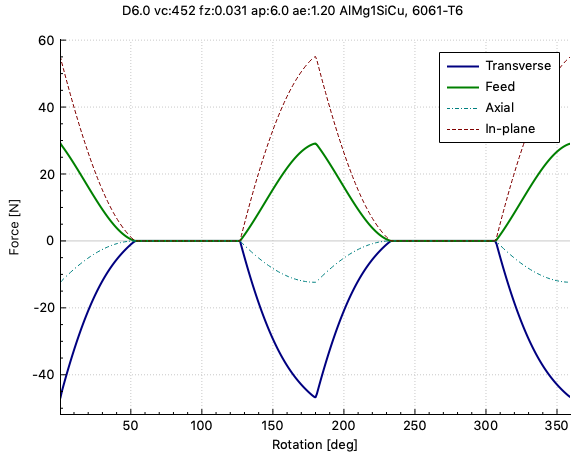 Keeping everything the same, but changing the helix angle to 40 degree: 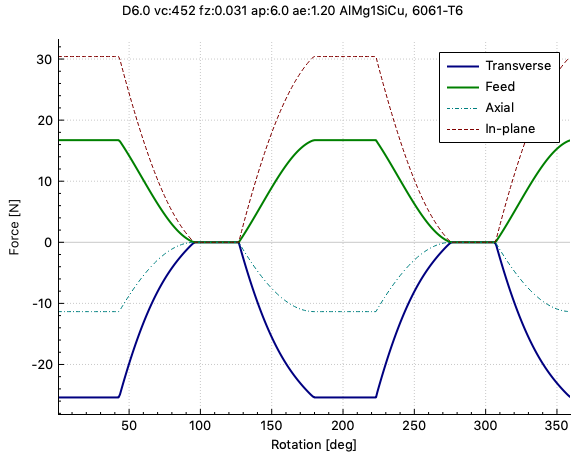 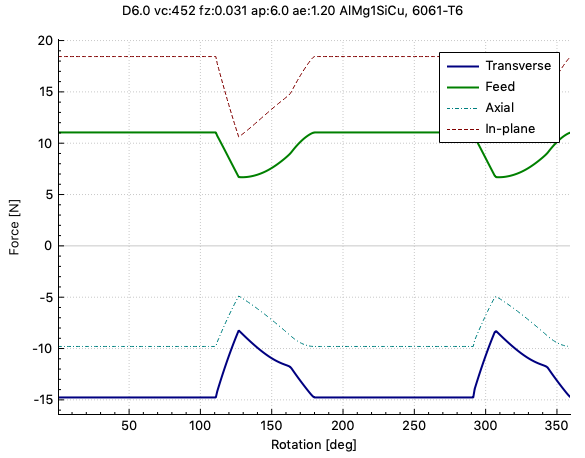 This last would be close to what you suggest, forces practically constant. Iff, and that’s the problem on a Shapeoko, if you can keep the chips from clogging up the flutes (just my impression with higher helix angle endmills).

Could you explain the force directions on the chart a little more pls?

I think I get axial, this would be vertical forces up and down on the cutter.
Feed is presumably in the feed direction, i.e. the direction the spindle is moving.
In plane and transverse though?

Also, what software did you use to get this data from? 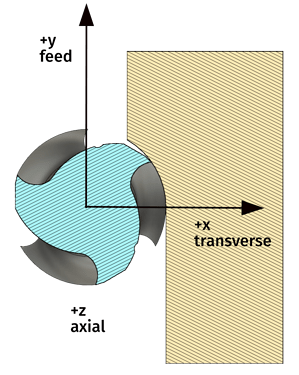 In-plane force is the magnitude of the vector sum of the feed and transverse forces. This is what your weakest axis motor needs to drive/hold in the worst case, a very critical value for the shapeoko, as I have found out (ouch!).