Can anyone look at the settings below in Fusion 360 to see where I am going wrong with my aluminum cut settings. I am trying to machine a simple rectangular pocket about 0.75" wide, 2.0" long, and 1.25" deep.

My 3XXL has an aluminum extrusion bed and is also sitting on XPS foam. I have an HDZ which is trammed in using a dial-indicator. All of the fasteners on the machine including pulley set screws have been loctited. All axis have been calibrated in GRBL.

This is my first attempt with aluminum so I am not surprised it didn’t go according to plan, but I thought that I did enough research to at least be somewhat successful.

I had chips weld to the tip of the cutter 2x. Once while performing the plunge, and a second time shortly after the plunge. My first attempt was with no lube, just a me standing there with an air wand blowing chips out. The second time I put some WD-40 on the bit to see if that helped at all.

Any help would be much appreciated! Thanks! 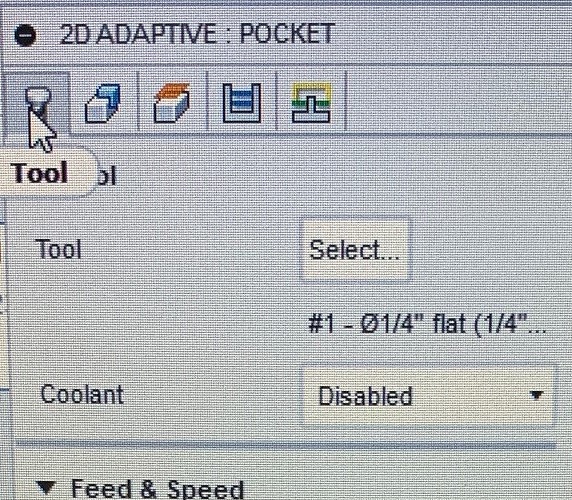 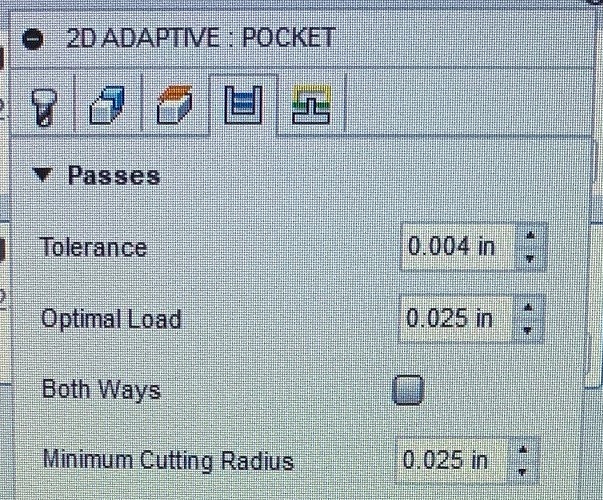 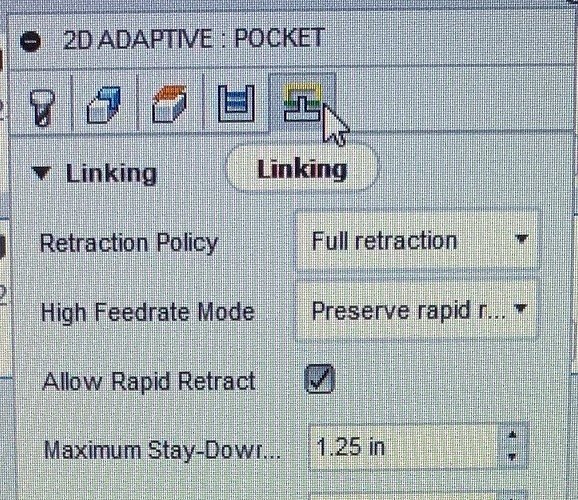 Cutting params look ok to me

Thank you for the fast response! I was hoping you would find something I did critically wrong so I could just just change a setting or two and life would be good.

Unfortunately, due to the width of the pocket, I don’t think I can make the helix much bigger, but I can definitely try making the ramp angle shallower.

Is conventional milling a good strategy for this pocket or should I try climb milling? I did some reading on this topic on the Carbide3D forums and others and there really isn’t any good consensus.

I see there is also a ramp feedrate that I had set to 48IPM. I am now guessing that the plunge feedrate is ignored and the ramp feedrate is what is actually used for the helix in. Should I lower that down to 32 IPM? 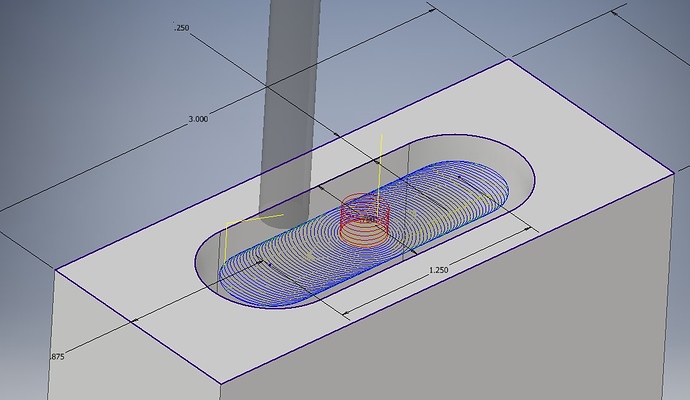 Is conventional milling a good strategy for this pocket or should I try climb milling? I did some reading on this topic on the Carbide3D forums and others and there really isn’t any good consensus.

Agreed, and that’s because there are relevant exceptions to the rule. After spending more time than I should have reading about that, I ended up using climb almost all the time, at least for roughing. I tried to summarize what I read here, but it’s obviously biased by my interpretation, others are very welcome to disagree. In your case I think climb will help though, by pushing chips behind the cutter.

I see there is also a ramp feedrate that I had set to 48IPM. I am now guessing that the plunge feedrate is ignored and the ramp feedrate is what is actually used for the helix in. Should I lower that down to 32 IPM?

Yes (plunge feedrate ignored if there is a ramp). I would not go lower than 48ipm to maintain a large enough chipload (0.001" at 50%WOC, which will be the case during the helical ramping)

You can also go and change the ramp angle on the linking tab to reduce the rate at which the helix moves down into the material, this reduces the load on the bottom of the cutter and the rate at which chips have to come out of the hole.

Depending on how tight your helix is your effective material speed increases too, which may warrant setting the ramp feed speed down a little to compensate, see this thread;

I guess this is what you get for trying to bore a 4.2mm hole with a 4mm cutter through 10mm of 6082T6 Aluminium, must remember to pre-drill next time

Do you have a way to pre drill a starting hole to guarantee an EZ start?

I could put it in the Bridgeport and drill it out. The problem is that the pocket is not all the way through, so at some point it is going to have to helix into the material at the bottom of the pocket.

Is this a good endmill for what I am trying to do? 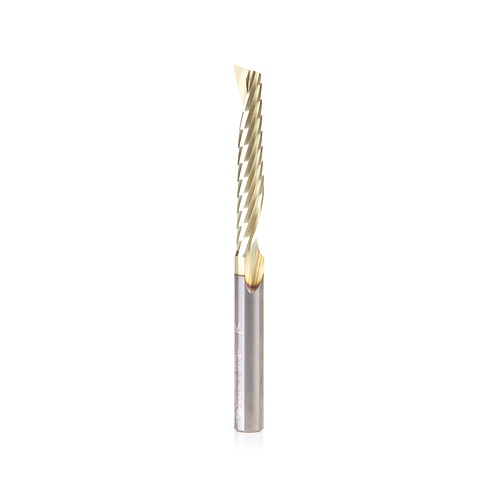 Do you need to cut that deep? If not get the shortest flute length needed. Long end mills deflect very easily and if you push it too hard and it chatters you stand a chance of chipping the cutting edge and trashing the end mill.

Can this part be done with 2 sided machining?

IMO it’s wise to not use endmills with longer cutter heights than you need (so stick-out can be minimized.) It’s also wise to make sure you’re not exceeding the manufacturer’s speed and feed recommendations for the workpiece. Amana seems to be stuck on 18,000 RPM for almost all of their speeds and feeds, but IMO you’d be better of increasing the speed up to 32,000 RPM and reduce the feed-rate to achieve a 0.001" chipload. Doing those things should reduce cutting forces and provide better results.

But others here may disagree.

The pocket is 1.25" deep so a 1.5" CH seems to make sense. What is the normally done in a deep pocket like this… Is it OK to rub the side of the wall with the shank if the flute length is not long enough to accommodate the full pocket depth? I have seen reduced diameter shanks that are a few thou smaller than the cutting flutes but go back to full diameter where it goes in the collet, but these are not very common.

Run the 3F like a high feed for roughing, hand reduce your shank up to cut depth or you can make Fusion step away from the wall past flute length.

I know it has been a few weeks since I posted, but I wanted to follow up in case someone searches and stumbles on this post in the future.

I had to abandon the adaptive tool path (96 IPM @ 0.075” DOC). No matter what I did, the initial plunge and the first moments of clearing sounded very rough and caused chips to weld to the endmill. I could mitigate this by making the DOC smaller, but that defeats the entire purpose of the adaptive toolpath.

I ended up switching to a standard pocket (46IPM @ 0.015 DOC) with finishing passes and the time was about the same as the adaptive and I have been able to cut the pocket complete without any aggressive sounding cuts. The only ‘tricky’ part was the start of each pass. I had to helix into the cut at a 1* angle to get rid of a little growl at the start of the cut on each step down.

I tried the new school way, but the old school pocket technique worked better for me.

I had did one without finishing passes and the pocket width was under by about 0.010” and had two vertical ridges in the pocket. Once I redid the toolpath using finishing passes the dimensions fell right into place, the ridges went away and the surface finish was actually pretty good.

Hope this helps someone in the future.

Thanks for the update, always interesting to hear feedback about what worked or not for folks.

Did you end up using the 3-flute you mentioned in your first post or that single flute you considered?
From the “welding” part of your feedback I would guess it was the 3-flute ? Ramping with a 3-flute into a (tight?) helix is tricky as chip evacuation can become a problem, which is why single-flute are much, much more forgiving.

Anyway, it you found a strategy that works for you, that’s what matters. Adaptive is not necessarily superior, just different, and (much to my dismay) @LiamN is starting to collect hard evidence that non-adaptive (wide+shallow) cuts are actually often preferable on a Shapeoko. I can’t get enough of that sweet brrr-brrr-brrr adaptive cutting sound though

I did stay with the 3-flute because I needed these to be done and couldn’t wait for a single flute. I will buy one though and do some more experimenting. I think that if the feedrate could be changed for the period of time after the helix and before the adaptive passes start, I probably could have made it work. I don’t think it was the helix that was the issue, I believe it was the few seconds after the helix where I was welding chips to the endmill. The only reason I say that is that the helix didn’t sound terrible, but the move after the helix sounded really aggressive.

The entry helix was as big as I could make it for a 1/4” endmill without leaving a nub in the middle.

I did put a section of 1/4” Loc-Line on the router for a continuous air blast and that seemed to help as well.

Thanks for all of the help

Anyway, it you found a strategy that works for you, that’s what matters. Adaptive is not necessarily superior, just different,

It is superior though, even when using traditional style depths of cut. Traditional pocketing can have radical changes in tool engagement that cause load spikes (part geometry depending). You’ll have to cam out to minimize chatter in these spikes. Adaptive can be run much more aggressively due to its constant load.

Due to our motion system, the more consistent you can keep cutter load, the better the cut will be and tools will last longer.

Agreed, I meant it in the typical “cutting deep using adaptive” scenario, but shallow adaptive, that’s probably 100% win all the time on our machines.

Ok, so @Simko ended up using a 0.015 depth of cut traditional. I just finished an adaptive video where my cut had an 0.030 doc. Is that not cutting deep? I mean its twice that traditional cut.
I think most people automatically think adaptive means full flute carnage. But the reality of these machines doesn’t support that (excluding the new Pro models). And no, running 0.010 radial isn’t a roughing cut imo lol.

Been having way too much fun with the Millaylzer and Modkita logs to go over exactly these types of cuts. “Shallow” adaptive definitely shines in aluminum on our machines but in softer materials things change.

Yeah, I confess, I have a thing for loooong chips, just because it’s fun to watch. It’s a bad habit.

But, its only a bad habit if its a bad cut and you’re only doing it for the sake of long chips. If you are willing to reduce mrr then they aren’t impossible to do right.