Picked up my nomad last Friday, and I have just started my first project in aluminium: a replacement magazine for my air rifle. However, I’m really struggling with my feeds and speeds, and I can’t seem to figure out which variable(s) to adjust.

I already murdered the supplied 1/8 endmill by running it at 6.35mm DOC, 0.38mm WOC and 2000mm/min at 14000 rpm. The WOC was probably too much because I could hear the machine bogging down before the spindle gave out. Also, lots of vibrations with a pretty hefty chuck of alu vised in the mini vise.

I’ve always been told that it’s best to use as much of the flute length as possible and taking very low WOC cuts to maximize tool stiffness and life, because it avoids doing all the work with just the bottom of the tool. However, all I can find in terms of feeds & speeds milling alu on the Nomad is using a very shallow cut (0.254mm) with a larger stepover. What I’m guessing is that the stiffness of the two guide rails of the y-axis is rather low and hence susceptible to vibrations in the z-plane. The upwards force that 6.35 mm of axial engagement produces might be too much for the Nomad 3. Is that the case, or am I just using too high/too low rpm, or too deep of a cut?

I just want to machine some aluminium without my machine vibrating itself to pieces or the spindle sounding like it’s about to explode. Which feeds & speeds suggestions that work for you?

Which alloy of aluminum are you cutting?

I’m not completely sure (got the stock from a friend who was clearing out his garage and had it laying around from a few years ago) but more than likely 6061.

There’s a video on cutting aluminum on the Nomad at:

I would suggest trying a coated single-flute endmill such as our #282Z.

That would explain a lot. I’m coming from a Maple ME-850 (quite obscure brand, think Haas VF2) which is a proper industrial VMC with a 7.5 kW spindle, so going to a Nomad has been a bit of an adjustment haha. Thanks!

Thanks, I’ll look into single flute endmills, though I doubt I could use the same speeds and feeds as a Shapeoko with a 1.5kW spindle on my Nomad.

On a slightly related note: should I go for the 1/8 inch single flute or the 1/4 inch?

Larger tooling in a Nomad is only suited for very soft materials. For aluminum: 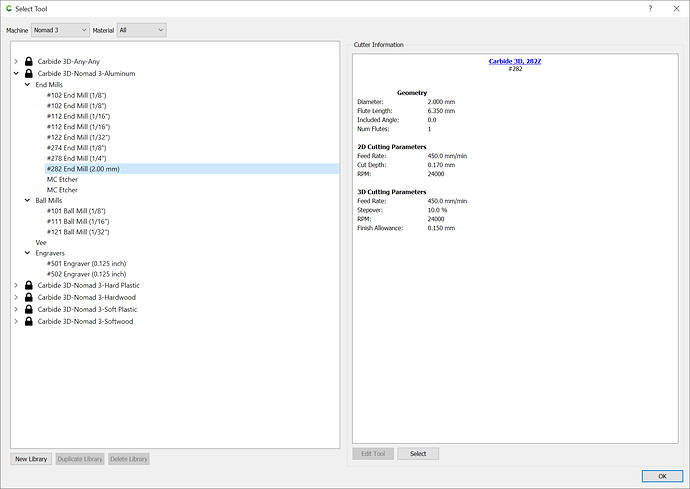 Oh man, a 0.170mm stepdown with a 0.2mm WOC and a really low feedrate? I mean, that’ll do it, but my laptop is currently having the time of its life calculating the 3D adaptive with those settings… For context, this is what I’m milling… 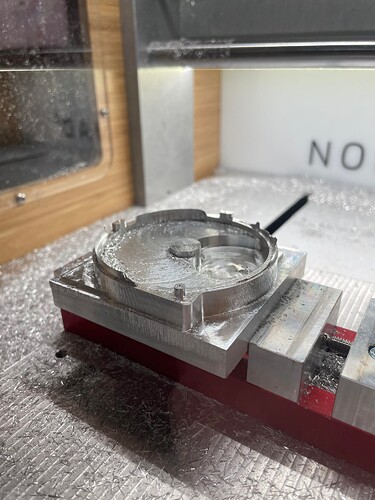 The feeds and speeds are pretty conservative — you should be able to adjust for efficiency’s sake w/ a bit of experimentation.

51 hours of machining… 54 megabytes of g-code for this one step. Are you absolutely sure?? 0.o

@Berend i would also recommend checking out the material monday videos. 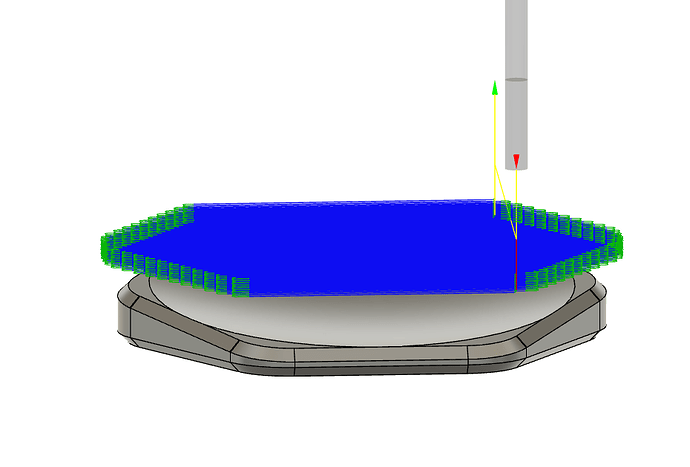 the resulting surface finish of those speeds
machining time: ~1hr 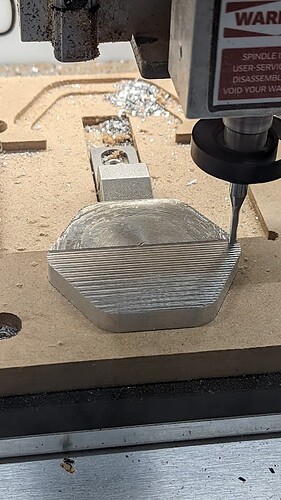 adaptive clearing using the same speeds, but the below cutting parameters 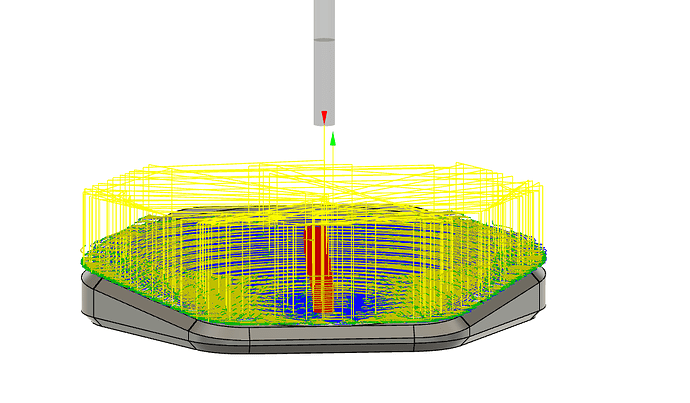 and the resulting surface finish 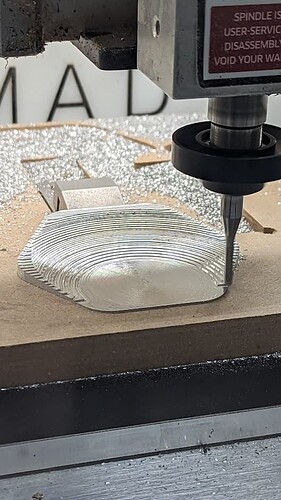 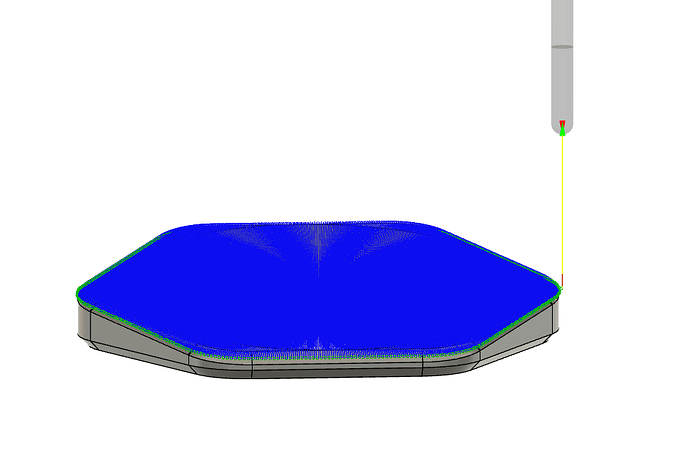 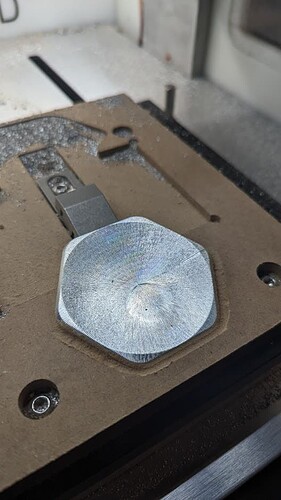 after a clean in the sink 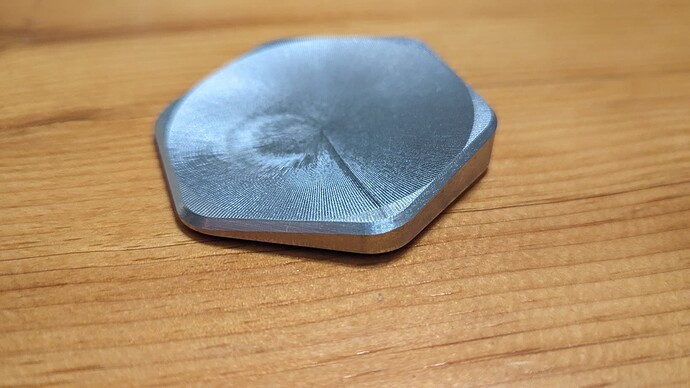 this maker coin/worry stone is approx 2" in diameter, and 1/2" thick, and was machined from a hexagonal piece of 6061 stock of that same diameter but just under 5/8" thick (hopefully that gives you an idea of the material that was removed.)

for reference, this is the piece of stock that i started with for the second operation. 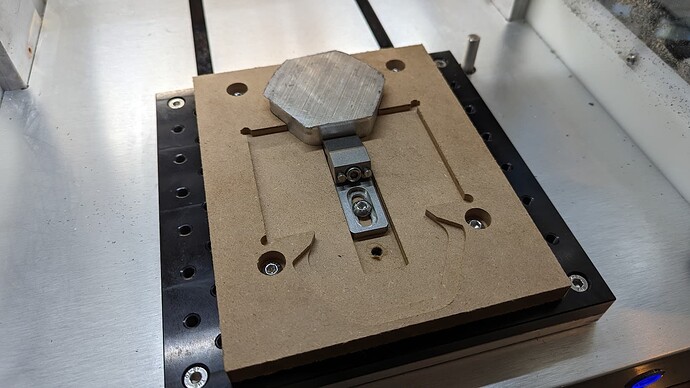 its the Nomad 3, but the MM videos were based on the older Nomad iirc. you can scale these up from my understanding, to better utilize the RPM the Nomad 3 can deliver.

Yeah, they haven’t really updated the MM videos for the newer Nomad unfortunately. Would be interesting to see how the added rigidity of the Nomad 3 affects things as well. How’s the noise/vibrations at those feeds & speeds?

Whoa, I can’t imagine a 1/8”bit with a depth of cut twice its diameter into aluminum or even hardwood for that matter. I’ve been told I cut too conservative, but I usually go half the diameter doc.

Well yes, but with a tiny width of cut, around 0.12mm. Still, too much apparently.

its not quiet thats for sure but the machine doesnt sound unhappy. i would recommend earplugs/in ear headphones if its in your office (mine is) if you plan on running it all day.

This image and video here was cut at 3690 adaptive .15mm doc 1.27 optimal load ( pretty agressive for the nomad) with toned down feeds for a finish. I was worried about a working part more so then surface finish.

Its important with the nomad to do a rough, finish and a spring pass. Small machines like this have alot of deflection to fight with.