New to Aluminum -- But breaking some end mills

I just started playing with cutting aluminum. I was trying to create a type of coin. I experimented with a couple of different types. And realized quickly that most text engraved required a small endmill. I have a 1/32 and decided to try that. I went with the default parameters for aluminum in CC. The bit broke before I could tell what was happening… Obviously too aggressive for my cheep Chinese endmill. I halved the rates and the bit lasted .5 seconds.

Any suggestions on some rational numbers to try? It is a 2 flute endmill I can go find the specs, but they didn’t provide a lot of data.

I should mention that the 1/16th endmill cut just fine and I even had some of the dreaded narrow and deep channels cutting out on of the coins. There are other issues, but I was happy with that result as a starting point.

I halved the rates and the bit lasted .5 seconds.

When you say “rates”, what parameters did you change. There are 4 parameters to consider:
Spindle Speed, Feedrate, DOC (Depth of Cut), WOC (Width of Cut / Stepover)

The default parameters for the #122 tool in CC are very conservative. If anything the feedrate could be slowed down to about 9ipm. But, if the tool is fully engaged, slotting, you may need to reduce the DOC as well.

Since I found tapered end mills, I stay away from conventional tiny cutters. Much much stronger.

EDIT (ADD) Remember aluminum becomes very sticky when hot (think peanut butter) some WD-40 will help it from sticking to the cutter, which primarily is the reason why they break (clogged flutes). 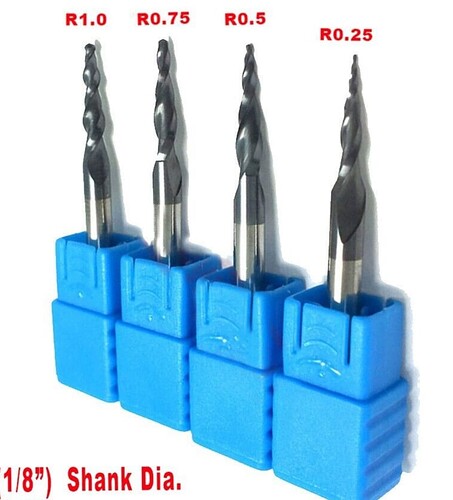 There is a simplified ‘speeds and feeds’ spreadsheet somewhere here in the forum, which I have used for setting tool parameters in Fusion360 with good success. I have gone with the general hobby-grade machine advice of WOC circa 50% of tool dia and DOC about 5% and no breakages so far. In this I keep the feed rate up to reduce heat from rubbing, which otherwise exacerbates the sticking issue.
Fewer flutes on smaller end mills, zero-flute even, is also general advice as the chips clear more easily. Coated tools is also highly spoken of as again it reduces sticking. I also use rubbing alcohol as the coolant/misting.
Not used as small a cutter as 1/16th yet, so interested in what you find works too.

I believe the spreadsheet you mean is at:

There is also extensive discussion at:

and see the videos at:

Also worth noting that your workholding becomes much more important as you decrease cutter size and go into metal.
I’ve been playing with challenge coins and wax seals lately. Here are some of my personal observations:

For context, most of the cutters I’ve been using are two flute sub-millimeter. My go to is half a millimeter but .2mm is also common in the rotation. (I’ve been meaning to try more tapered tooling)

Those observations are in order of what I would try to fix first. Workholding, cooling, air blast.

Note that I am also pretty new to this so ymmv. Just felt like we might have some very similar end goals 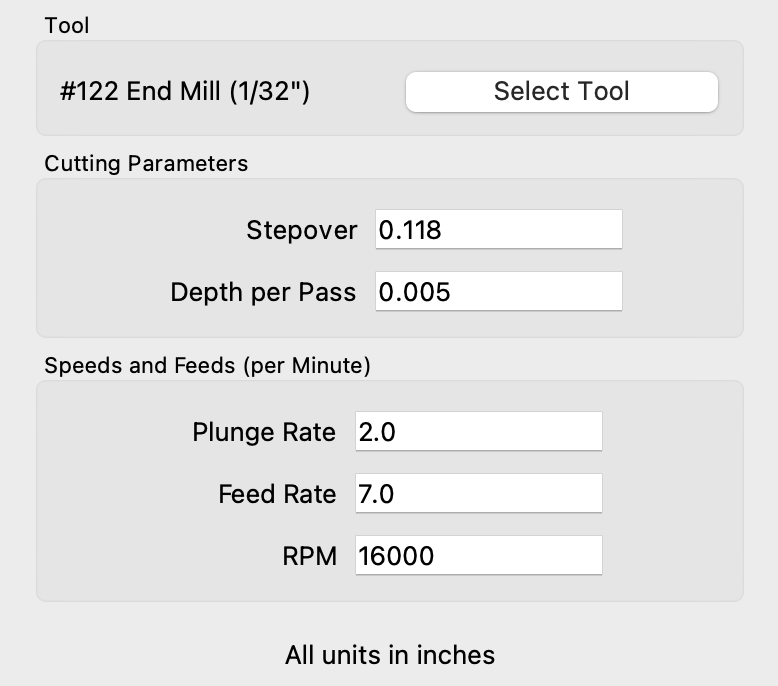 Tod, Thanks. I didn’t notice that. Dropping the DOC is the something I hadn’t tried but was considering next. The step over would be a problem.

Thanks to everyone for the helpful suggestions.I’ll try again later in the week