For those that do not want to pay Microsoft you can get the open source Libre Ofice or Openoffice and they will open MS documents and output them to MS if done in their native file. Both are free and quite robust. I like the Libre Office but I used to work for Oracle and when they bought Sun Microsystems the application was called Star Office which became Openoffice. Oracle is so tight and will not give away anything they donated Openoffice to Apache so they did not have to support a free product.

LibreOffice and OpenOffice use the same source code and will open their native files in both applications.

So if you do not have MS Office you can still open and export in the MS formats.

Will you use some wild programs i never heard of haha. not to be off topic but man they seem out there. Opensource/free/underground only? jk

Well, the NeXTstep stuff wasn’t opensource, save for TeX, and the Unix underpinnings.

Mostly, it’s a matter of never being will to accept the limitations and applications everyone else would:

Mostly, it’s just a matter of having started w/ personal computers back at the beginning, and having access to pretty much all of the platforms — at one point in time, I had daily access to Mac OS, Windows, and NeXT computers of similar CPU-spec.

There are no perfect apps, in fact I think that in some cases, we’ve regressed. Some have not or barely evolved just enough to run on the latest OS. Why is it that no spreadsheet program can natively deal with any type of number value, convert them, heck, the way spreadsheet deal with time and date is arcane. I should be able to define units in cell that include size for example one cell in mm while another would be in inches and the conversion could be done automatically instead of having to enter a formula. Spreadsheets are a great tool as @gmack has shown but unfortunately, they have been abandoned by developers. On the other hand, we now have 10 spreadsheet apps that can open a spreadsheet saved in what used to be a proprietary format.

I’m not a software guy, I just use the software tools that I once needed and now know. It would be great if someone would add a pretty GUI or redo the workbook to make it more palatable/useful. The spreadsheet formulas are all available. But please don’t obfuscate the underlying principles/math! 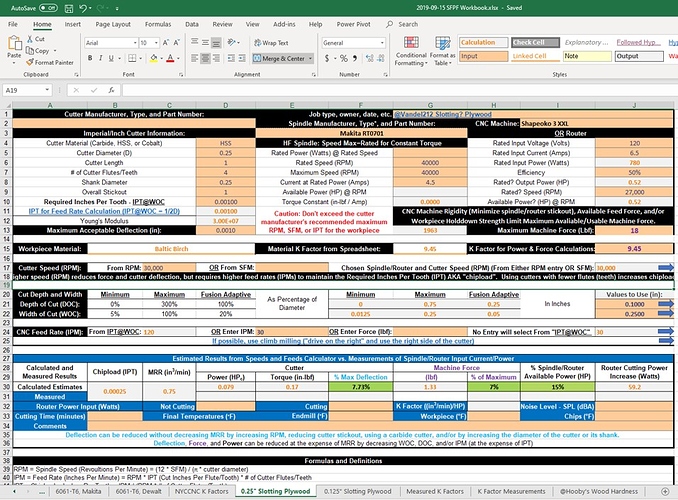 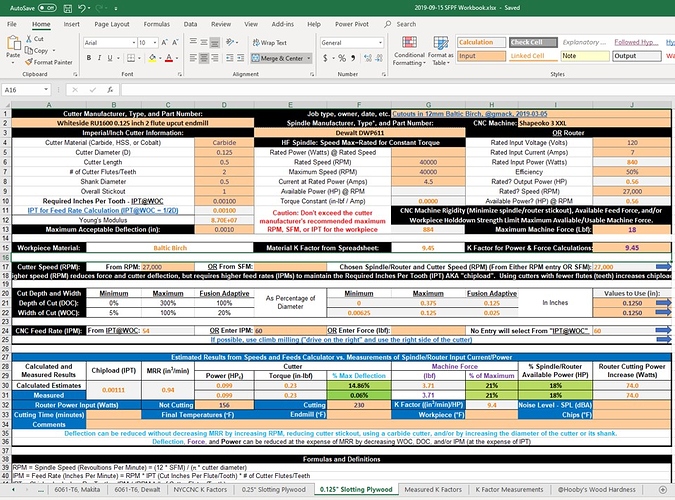 OOPS - The original results from the SFPF calculator for straight router bits did not consider that it’s the cutter shaft material that determines the cutter deflection. Cutters that are carbide tipped (like the Amana) or use carbide inserts cutters likely have steel shanks - so they aren’t as stiff and deflect more. I’ve corrected this for the Amana bit as shown here.

Yonico makes a bottom cutting/clearing carbide tipped 3/4" diameter 1/4" shank router bit that should be able to plunge (I plan to try that). Since it’s only rated for 24,000 RPM, the 27,000RPM Dewalt trim router should provide more power than the 30,000 RPM Makita. Here’s what the SFPF calculator predicts for that.

Dewalt Yonico2072×1002 350 KB
As shown below, a 800 Watt HF spindle should enable twice the slot depth (and material removal rate) if the Shapeoko can handle the required doubling of force.

Which HF router are you mentioning? The new one they released?

Probably the new one we recently discussed in another thread.

Which HF router are you mentioning? The new one they released?

This one - but I admit to guesstimating the spindle’s rated current based on the power and voltage shown on it. What “new one”?

Whoops, sorry. HF means “Harbor Freight” in most conversations I have so I misunderstood. However, I did mean their Makita clone.

Eldar Gerfanov says: “There probably should be a “Max cutting force” value in the machine profile. I will add in the future updates [to HSMAdvisor].” IMO HSMAdvisor is a much more useful SFPF Calculator than GWizard and Eldar is much more responsive to questions and suggestions than BW. Hopefully he’ll make the mods necessary to put me “out of business”! @Vince.Fab and @Julien you might want to watch the steel cutting video in the first link!

Since some folks like @vince, @Julien, and @Kai seem to be using this calculator, I figured that it’s about time that it got updated. This thread covers the rational and discusses some of the upgrades. The Excel SFPF Workbook is in this file:2020-06-11 SFPF Workbook.zip (157.2 KB) and here’s what the three worksheets for the three spindle types look like for the Kennametal endmill speeds and feeds shown. Please let me know if there are any problems with it or questions about it. 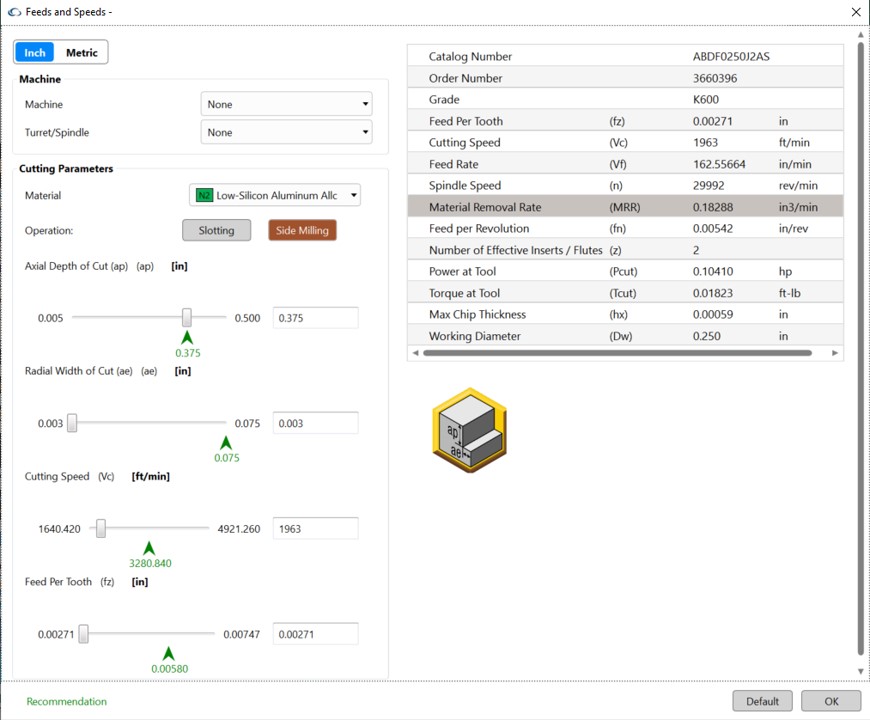 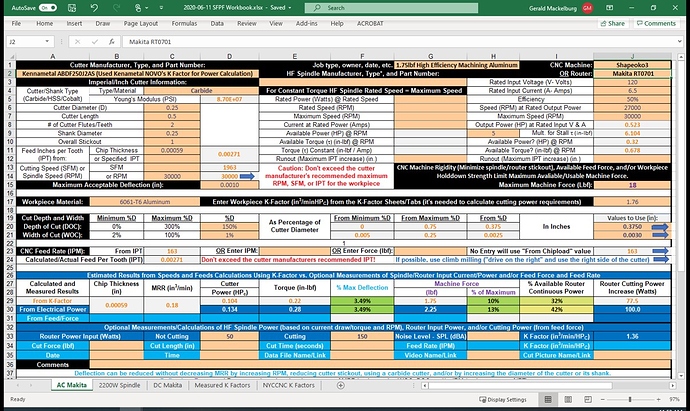 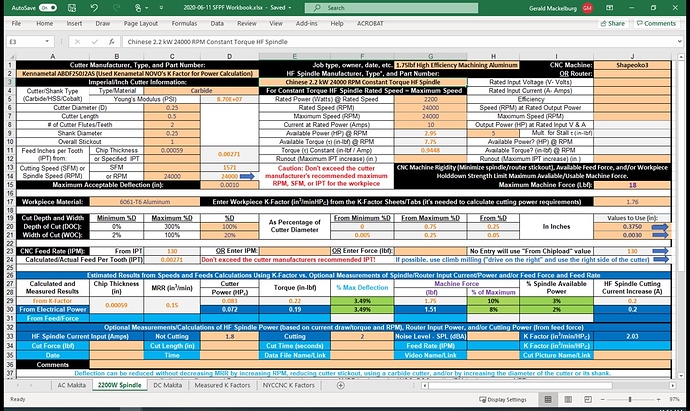 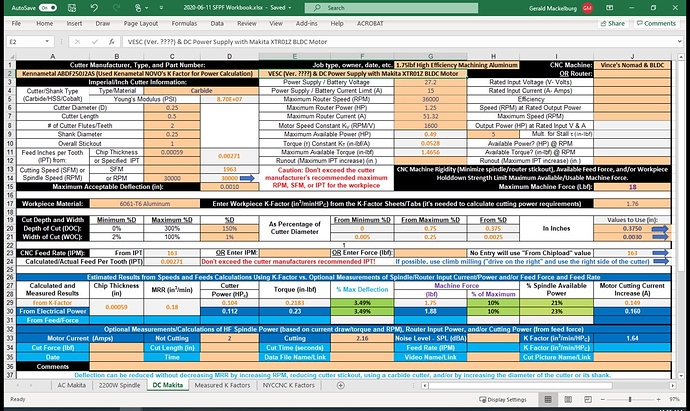 Gerald, I’m glad you keep updating this excellent tool, however, there are so many versions now maybe next time use a version number in the file name this way we know if it is a major or minor upgrade.

I guess I’ll call this Ver.3.1 then. It fixes an issue with the June 11 Ver.3.0 - which I would consider a major upgrade from the previous versions. As shown below, I’ve also added sheets for the most commonly used Shapeoko routers/spindles. 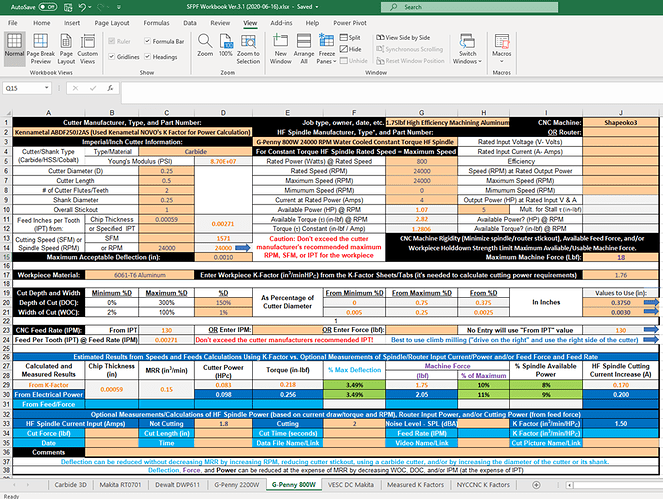 “Hardest thing in the world is to avoid screwing up” - it was on the new VESC DC Makita spindle spreadsheet again. So I fixed it in this update: SFPF Workbook Ver.3.1.1 (2020-06-17).zip (212.7 KB)
I also added another measurement field (Cell H33) that @Vince.Fab and others can use to enter the actual (rather than commanded) spindle speed to improve the accuracy of the cutting power and K Factor calculations. Those measurements/calculations could potentially be significantly more accurate than that from either HF Spindles or AC routers.

I also generated some procedures (After use procedures.pdf (4.0 MB)) showing how to make copies of spreadsheets (to save results), load their K Factor measurement data into the “Measured K Factor” spreadsheet (for subsequent use/comparison), delete sheets from the workbook, and add hyperlinks to aid in documenting cutting parameters and results. 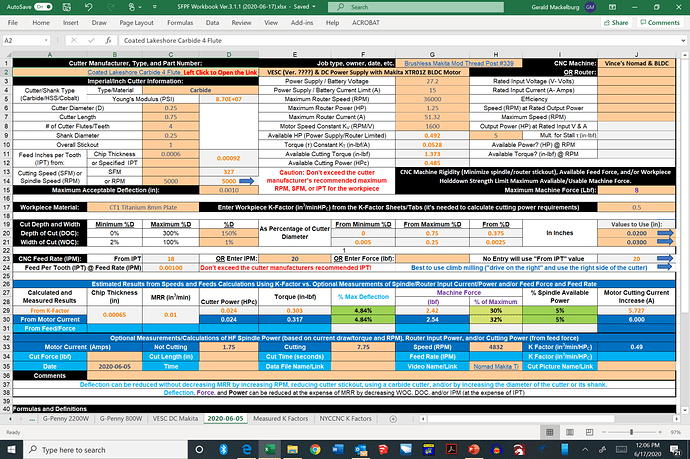