As I’m waiting for the delivery of my Nomad 3, I thought I would prepare ahead of time: set up tool libraries, start working on jig designs, etc. But I had trouble finding information — in fact, the Carbide3D web site doesn’t even mention the Nomad 3 until you get to the store! (according to carbide3d.com, it seems like “The Nomad 883 Pro” is the latest and greatest).

I know that when working hard with heads down, it’s sometimes difficult to guess what it is people could be looking for. So, trying to be constructive, I tried to write down what I expected to find on the Nomad “Downloads” page:

I know many of those things have been created by the community. But multiple versions of files, in multiple places, with fragmentary information, are not the solution. For example, I found two different table drawings, each of them had errors in it, and one was incomplete. There is Winston’s tool library from 2017, but it doesn’t seem to contain the tool holder, just several mills.

A large part of the Nomad value proposition is that it’s usable out-of-the-box. In fact, that’s exactly why I bought a Nomad instead of a random 3018 machine. Officially supported documentation and tool libraries would go a long way towards distancing Nomad from the competition.

It’s new, and we’re still working on that sort of thing, but some of it is in common with the previous models, so please see:

[image] Yeah, my 3 pieces of 6061 came shipped in a stack and were “stuck” together. I have no way of measuring “flat” but I’m just going to pretend that if I take any two sides of any of the 3 pieces and place them together and they stick, that counts as “flat enough” for me!

Not sure what you mean by:

The high end of the Nomad 3 spindle range and the low end of the Carbide Compact Router overlap, so things written for the Shapeoko may help.

You should test feeds and speeds in a piece of scrap using the technique at: https://precisebits.com/tutorials/calibrating_feeds_n_speeds.htm

Extensive discussion at: Origin/consistency of chipload recommendations and https://shapeokoenthusiasts.gitbook.io/shapeoko-cnc-a-to-z/feeds-and-speeds-basics with a spreadsheet for this at: Speeds, Feeds, Power, and Force (SFPF) Calculator

Here is a list of tooling libraries and links for Autodesk Fusion 360 from: https://wiki.shapeoko.com/index.php/Commercial_Software#3D_CAD

I think this might be linked at or discussed at: Vise and Jig in Fusion 360 — pretty easy to make from the PDF above.

Okay, today’s project is making up some clamps since they are not included with the nifty Nomad Threaded table (and I’d like some metal ones to use w/ the T-track on my XL). Since the drawing for this doesn’t seem to have been made available, and I’m not inclined to wait for Monday to pester someone competent at support, I drew one up based on some rough measurements and the published table and wasteboard file: While it would be simple enough for anyone to superimpose a 1" grid of 5mm circle…

Following this topic. (I have worked thru many of these details for myself but still would like to see more.)

Hi Will — thanks for all the pointers! I think in a way you are making my point for me. What I was trying to show is not that there is no information, but rather that there is too much of it in too many places, and we don’t know what’s authoritative. I also think that Carbide3D can significantly improve customer experience by throwing just a little bit of support towards Fusion 360, which I guess is within the top 3 software tools used with the Nomad.

The table drawing you pointed me to is something I found a while ago. Here’s what went through my head as I found it: “hmm, that still doesn’t look complete — I can only guess the overall table dimensions, I have no idea what the clearance is around the table, I also don’t know if I can use the countersunk non-threaded holes with bolts and nuts below the table, is there enough space? Also, this is from 2015, perhaps there is a later version? Also, this is for the Nomad 883, does this apply to the Nomad 3?”.

My conclusion was that I will save the drawing for later, but I can’t do anything until the real table arrives and until I can actually measure it, because that drawing is not definitive.

What do I mean by the tool holder definition? Here’s an example: 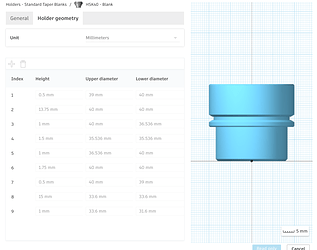 Do I need this? Yes, if I want to know if the holder will collide with my part when cutting. Can I just measure this on the Nomad after it arrives? Sure. Should every Nomad user do this? Probably not?

Fusion 360 has built-in machine definitions for devices like Prusa I3 MK3s, as well as a bunch of industrial CNCs. Why can’t it have one for Nomad 3? If not built-in, why shouldn’t we just download a file with a machine definition, tool holder definition, and the two tools that you ship, for various materials? Similar to what I think you do in Carbide Create.

Anyway. I don’t want to complain or push. I just thought I would show the “new customer” point of view. I think with relatively little effort (I’d guess it’s 2-3 days of work) you could have an authoritative Nomad 3 page with all the information mentioned above.

Here is a link to my version of the Nomand3 table, it is thicker than the Nomad Pro table, if it asks for a password use Nomad3. I checked it versus 2 different drawings I found scattered around the web.

I defined my own machine parameters, I can share that also if you wish. It wasn’t too difficult.

Also, in the tool settings I used Maritool BT30-ER11-50, it is not exactly the same as the Nomad but it does use the ER11 collet.

To Jan’s point, all of this should come from Carbide3D. I’d be happy to share it with the Carbide3D team, they should check it, make any necessary changes, and publish it on their web-site.

Bob, thanks, this is super helpful! Is there any chance you could post a link to a .f3d export? I can access and view the design, but it seems the Fusion web interface doesn’t let me download it.

Jan, here is a link to the files in Google Drive, anyone should be able to download from here.
https://drive.google.com/drive/folders/1k93vTsrxHMtt9AloLT2Wg-c3fA3k95Km?usp=sharing