So, after adding LEDs last week, and running several more lithophanes, I started running into heat issues with the spindle. Since I was going to do a tear down, I decided to update the power supply for the LEDs (worth it, no more flicker) and added a brushless fan and heatsink to the spindle. So far so good. 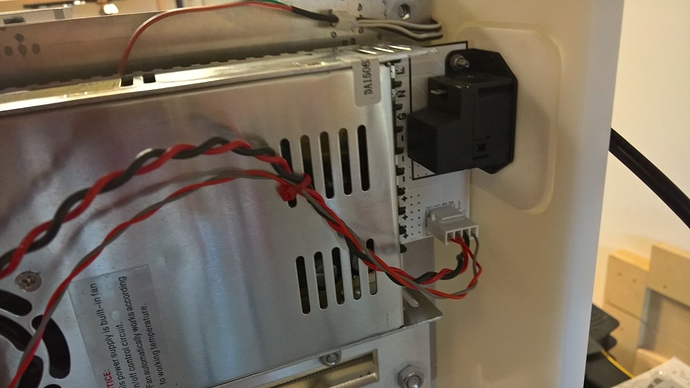 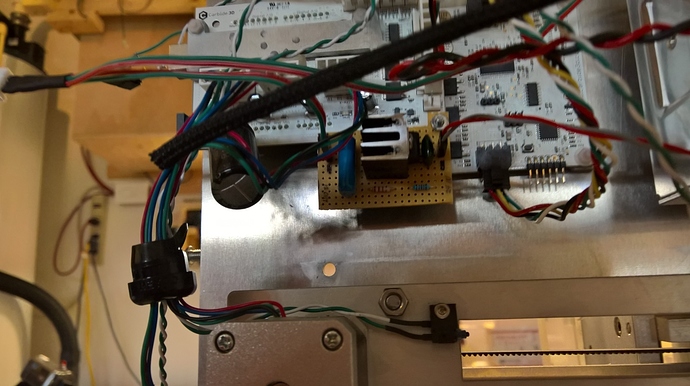 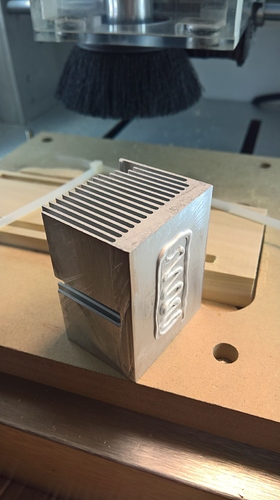 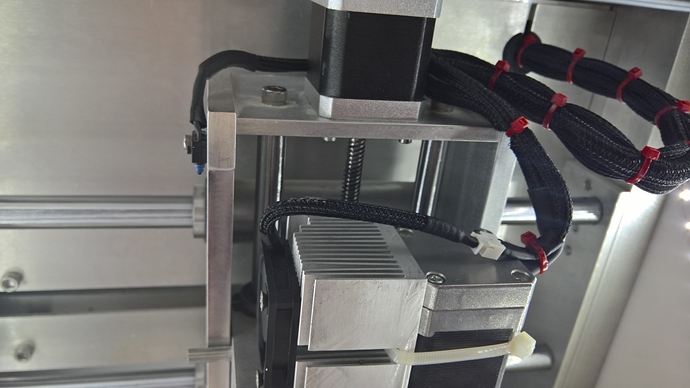 My original spindle ate itself. Probably a bad bearing. That made me a bit protective of the replacement. While not as fancy as your setup,this keeps things frosty. I used a heat sink salvaged from an old computer, some heat sink compound, and a zipp tie. Also note the Liquid Crystal Thermometer sticker. 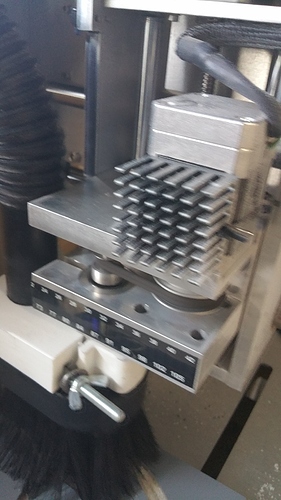 There is also a computer fan blowing into the cabinet which provides added cooling. 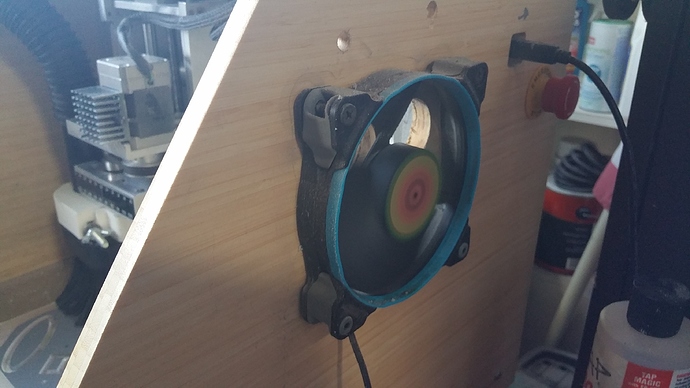 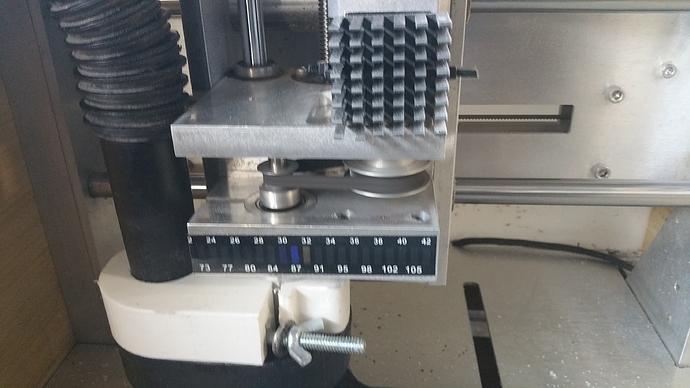 Wow, I’ve been having overheating problems too. I Micky Moused some heat sinks to the main stepper motor to try and solve the problem. However, it is still locking up after about three hours of milling. I used my Android phone with Seek Thermal to take images of where the heat is. In this image you can see one of the two heat sinks that are simply strapped to the stepper motor. They are not attached well as you can see the deep blue heat sink to the right side, indicating it is cool, even with heavy thermal paste.

Mark_Estes, when I put my heat sink in the front like yours it hits the cover when the head frame moves to its up most position. Mine looks very similar to yours in size after I took it from a dead motherboard. At the moment I’m too frustrated to fire the Nomad back up. I had stopped using it for two months because it overheated the very first day I owned it so I’m wondering if the motor or controller is going bad.

FlatBaller, my heat sink was hitting the left of the enclosure often so I had to move mine to the inside portion of the head frame. I like how you brought power over to the fan on the heat sink. 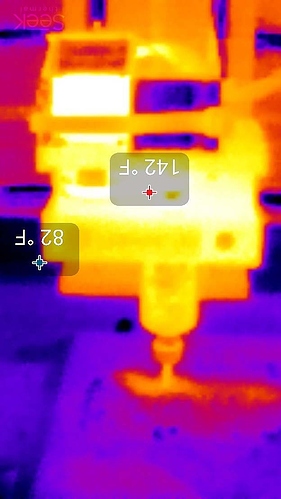 Damn, seems like your system runs way too hot. I suggest contacting C3D for help. My stepper motor seems fine. my hea tsink is trying to cool the spindle drive. Either my heat sink is smaller or the spindle motor is smaller on my nomad. I have at least a finger thickness between the heat sink and the lid (which I never close anymore).

I noticed my motor gets awe fully hot after long runs. I’m borrowing a laser thermometer and run some tests with and without heat sync and try and get some numbers we can compare.

Stepper motor’s temperature is OK up to 80C, but above that is not good. Are you guys seeing temperatures above that?

Not the stepper, the brushless spindle motor.

i knew what you meant…

FlatBaller’s comment is valid. My terminology was wrong. But with the modern motors I don’t worry if I can touch it without immediate pain.

What would concern me would be the spindle cartridge itself getting hot. When I had a Sherline mill, I installed the 10000 rpm pulley set. A specific part of the installation instructions was to back off the bearing preload by about .0003" (i.e. slightly turning the clamping nut) to avoid heat runaway from the bearing friction.

After my episode with the spindle pulley backing off and removing all preload from the spindle bearings, I put too much preload on when I reinstalled the pulley. There is no hard stop–the pulley preloads the bearings through a Belleville spring washer. The bearing cartridge rapidly heated up at high RPM and I backed off the preload a little and things are fine now.

When the spindle is held by two widely-separated bearings, as on the Sherline and Nomad, it is a balancing act between bearing preload (you need enough to resist vertical machining forces) and overloading the bearings. Large spindles, such as the Tormach, will have a matched, preloaded bearing pair at the bottom of the spindle, which are clamped together, and a separate floating bearing at the top of the spindle just to keep it in line.

All rambling aside, I think that the spindle motor (and the Z axis stepper for that matter) is well enough isolated from the spindle cartridge that it won’t be wicking significant heat into the spindle. But I don’t have an IR thermometer so I appreicate the heat photos such as Munk attached. The spindle doesn’t seem any warmer than the lower part of the carriage.

@Mark_Estes I was in the middle of adding air conditioning just like yours when my spindle motor decided it had enough while making a custom heat sink for the right side. I am adding a big CPU fan on the side wall with a 3" hole also. Time to make a video for support

So Jorge thinks it’s the hall effect sensor and not the motor itself. Will post again after the maintenance is complete. C3D

Latest rebuild with a new spindle motor, 2 heat sinks, and lots more air movement. thanks @Mark_Estes for the design idea. 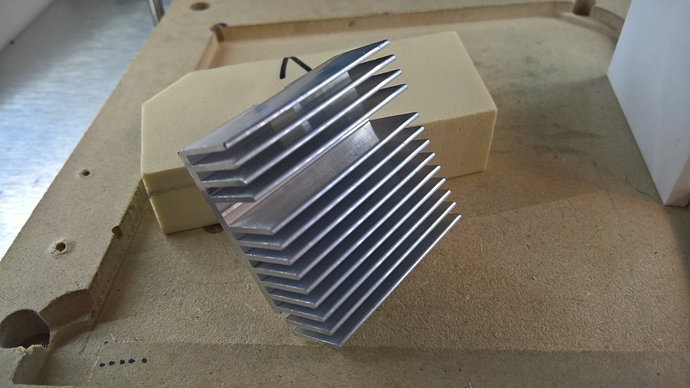 Both heat sinks mounted with 2 zip ties before trimming: 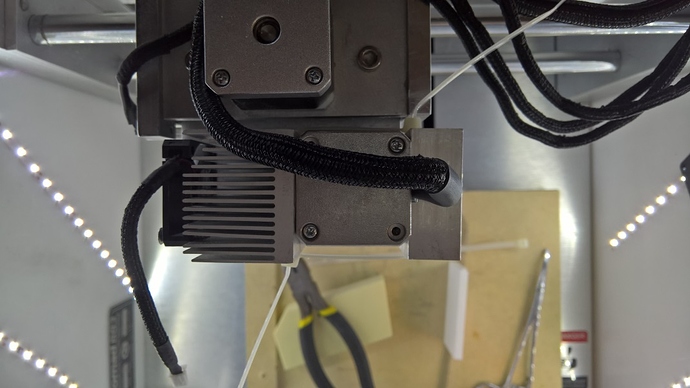 Clean wires tied up. I swapped out the plug in the back wall with a rubber grommet due to space issues: 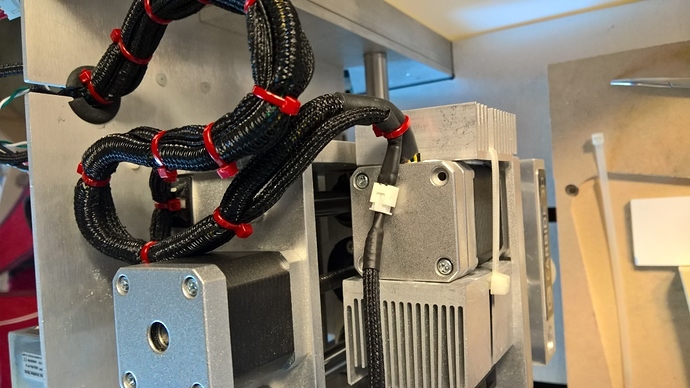 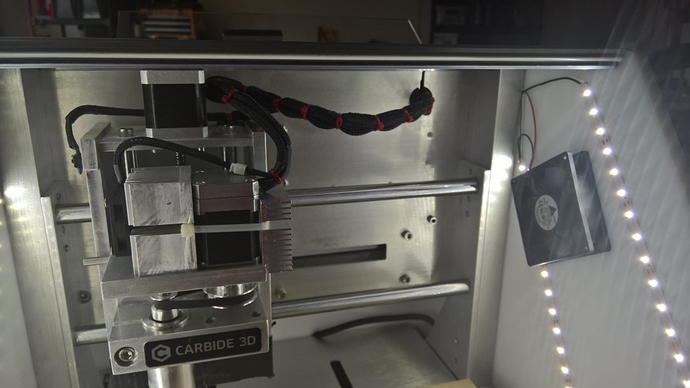 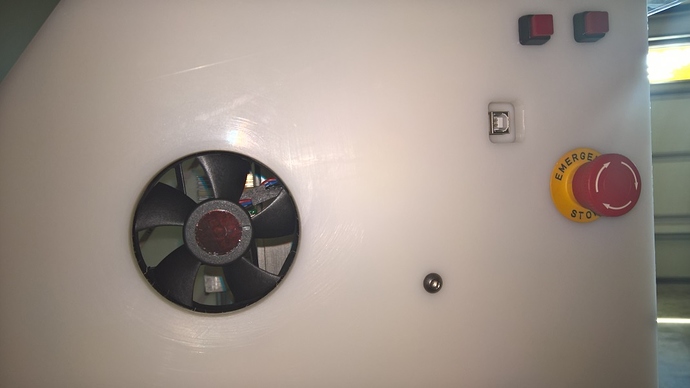 Nice work. You made real what mine is pretending to be.

So, after the new additional air flow, I am seeing dramatically lower spindle motor temperatures after a multi-hour cut even with the cover still down. Cool to the touch

. Hopefully this will also help keep the hall sensor healthy, as I have not seen any notion of stalling.

Has the cooling helped the sensors or do you still have the spindle motor shutting down after hours of use? My Nomad 883 Pro is really getting on my nerves as I have heat sinks on fours sides of it but it still keeps shutting down mid cuts.

This video taken yesterday shows a job I was trying to restart after the spindle stopped cutting. You can see it trying to start and then coming to a dead stop several times. SO FRUSTRATING. Since day one after about 2 hours of use, this happens.

Here’s a quick video of the heatsinks, fan setup I am using currently:
https://goo.gl/photos/Qw4e8du84cmp3FRd6

Here is a plea for anyone that can shed some light onto what is going wrong with the spindle?
https://goo.gl/photos/AHNNL9iRc9mWxoidA

My Nomad 883 Pro is serial number 038. Is it possible that there is a problem with the circuit board that drives the spindle possibly? I’ll add heat sinks and fans to any chip or chips someone could identify.

Have you tried talking to carbide support? I’ve seen a couple posts that are a bit like this, < Spindle stalls almost immediately - SOLVED > < Nomad: Spindle stopping intermittently [SOLVED] >

That was a fast response to something I just posted. This community is amazingly quick and very helpful. I’ll need to read/digest what are in these links after I cool down myself.

An active fan blowing across the heat sinks have made a big difference in keeping the motor and spindle cooler, and I am attributing that to keeping the hall effect sensor happier. I have not seen any signs of stalling yet with the current setup, very happy.

And yes, I did have to replace the original spindle motor and sensor with a new one with new wiring, which could have also been part of the problem.

I finally contacted Cardbide3D support as you suggested (I was thinking that I could solve this on my own). Jorge from support responded very quickly and sent me a new control board and rotor next day air! Wow, talk about fantastic support. The board went from a single chip driver solution to six individual chips. I added a heatsink just in case as I wouldn’t want these to overheat plus there is already a fan which is part of the Nomad 883 Pro design.

INITIAL RUN
I have a project which had failed twelve times before it completed and required that I wait a day between each continuation with the old board. With the new board I ran it with faster spindle and feed rates and it completed the first time! It ran for approximately four hours with no hick-ups or problems at all. I’m so happy right now.