This came up in a support e-mail — unfortunately, Carbide Create can’t preview this, but it can be done — it just takes a bit of faith:
​
​First, model the slot (the width should be a bit more than the shaft of the keyhole tool, the length equal to how long you want) — this is best done as two circles and a rectangle all connected — using a rectangle makes it easy to position the circles since one can use the midpoints: 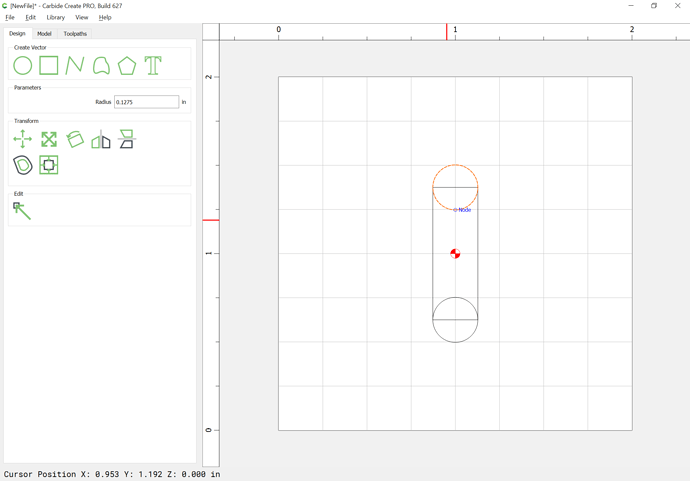 ​Then draw in the entry hole (this should be a bit more in diameter than the cutting portion of the keyhole tool) — it’s easy to position accurately as the afore-mentioned circles are because one can as noted above, use the midpoint: 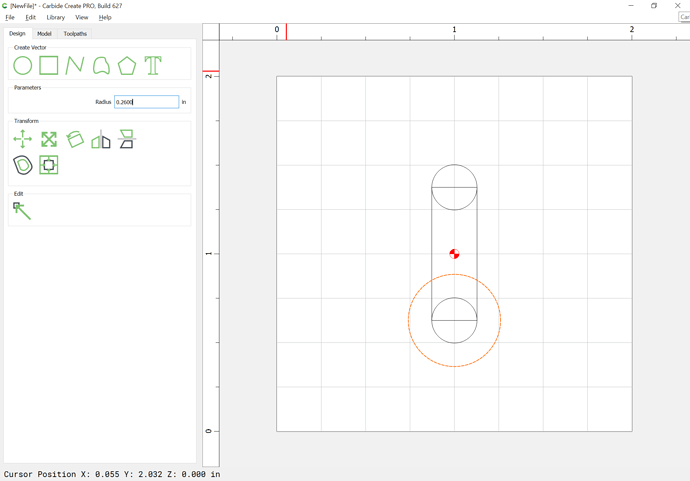 ​draw in a small square which matches the increase in diameter above: 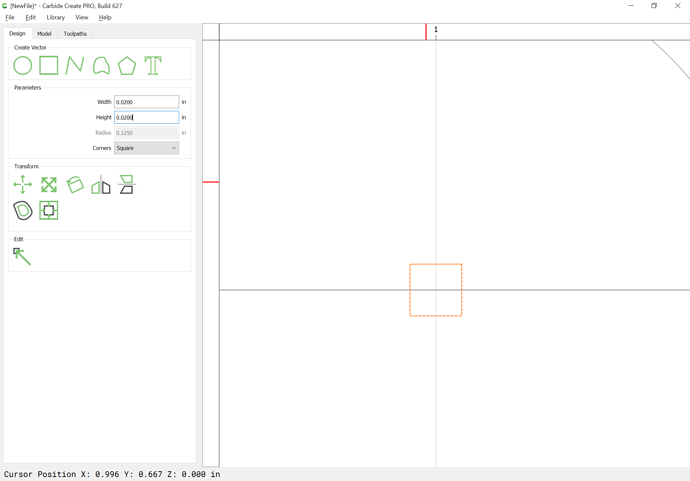 ​shift it down so that it aligns at the top: 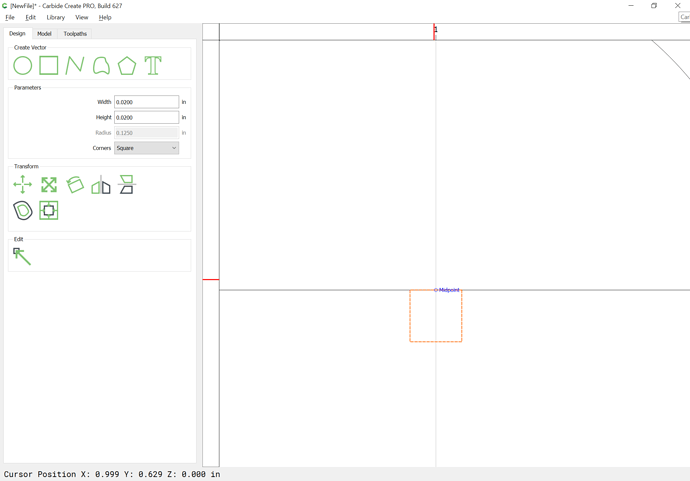 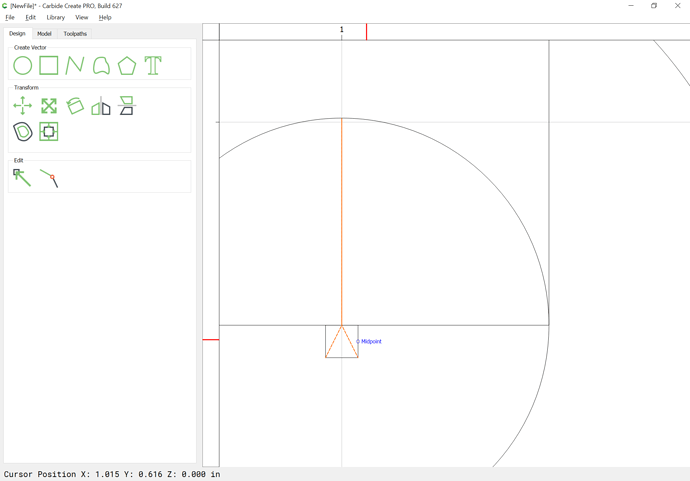 ​and then Node editing to get the top position right: 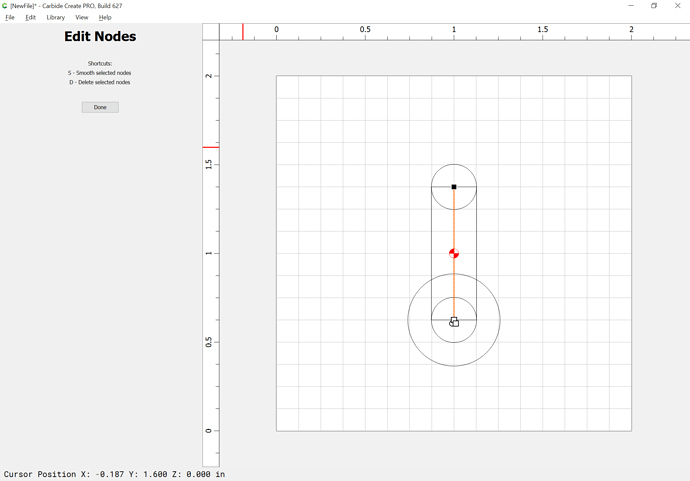 Note that it will be necessary to extend the bottom slot by the height of the square by duping the square and making it a rectangle as wide as the circle and dragging a duplicate of the circle down to align at the bottom midpoint center: 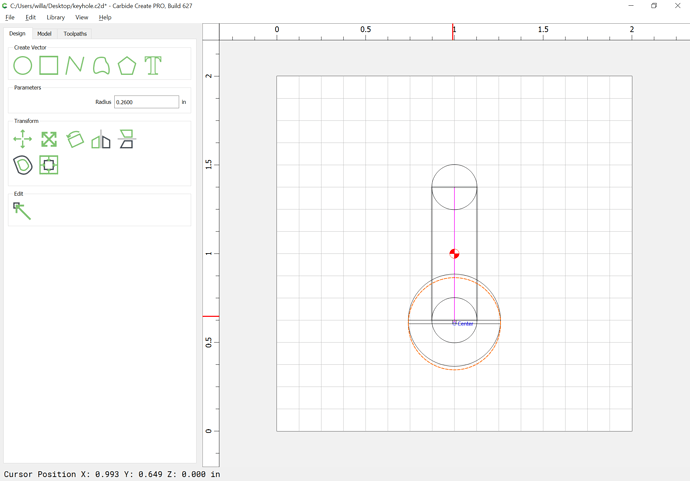 Select all the circles and rectangles and Boolean Union: 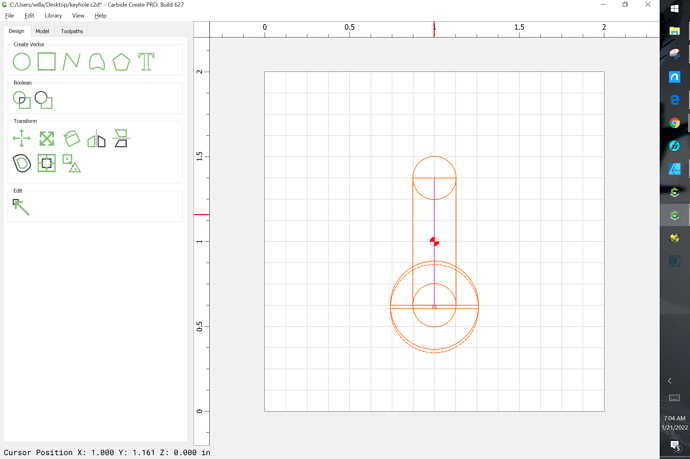 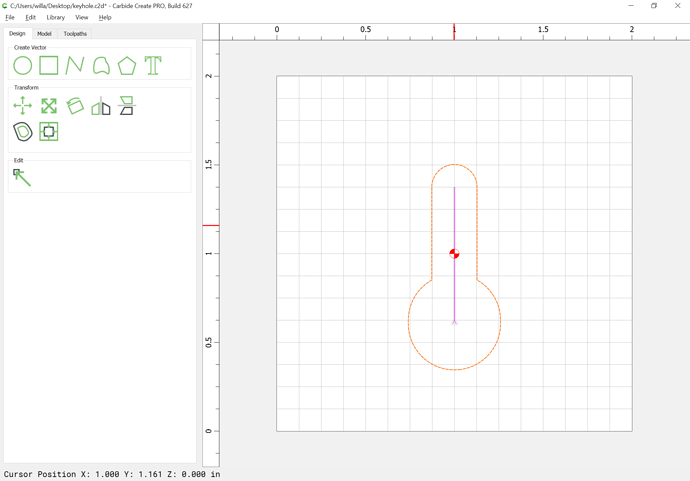 ​Then switch to the Toolpath pane and assign a pocket to the shape to the desired depth: 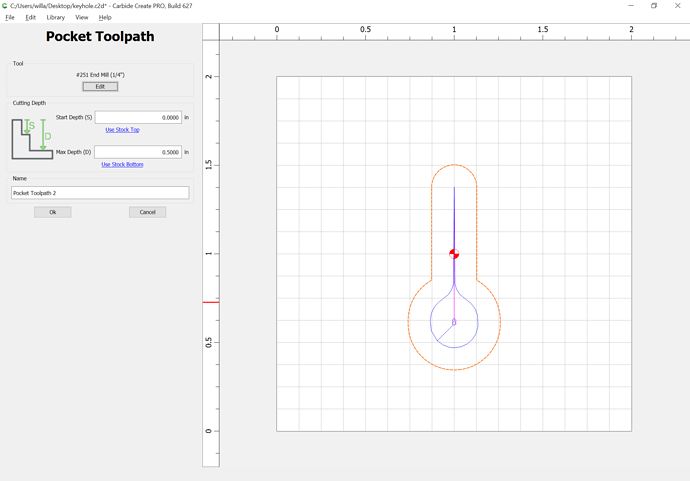 ​Then select the polyline and assign a different tool to make a no offset contour cut to that depth or a bit deeper — I like to use a ball-nose endmill and a bit deeper so that I can see the cut and assign a Depth per Pass greater than the depth of the pocket so that it will be cut in a single pass: 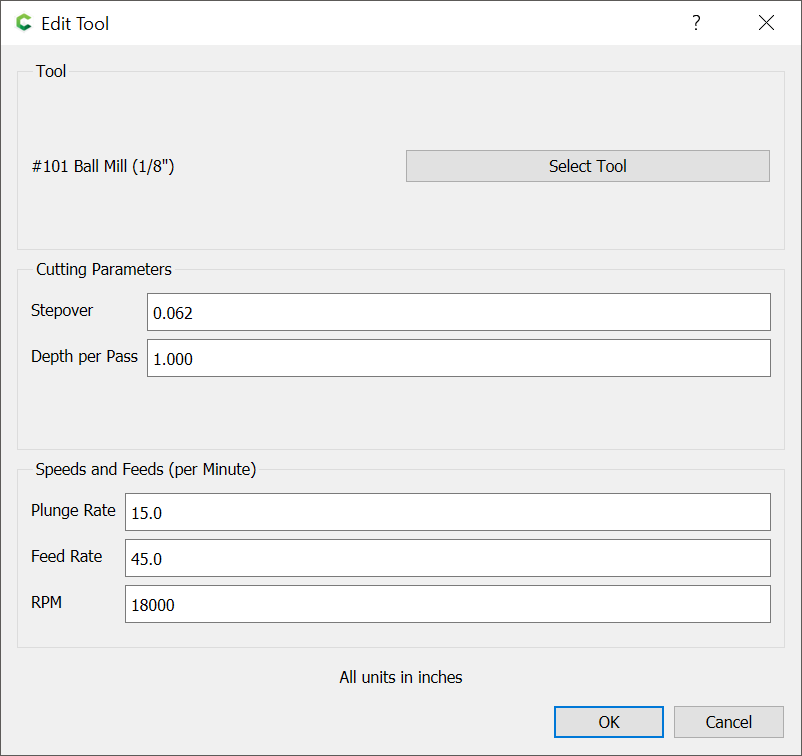 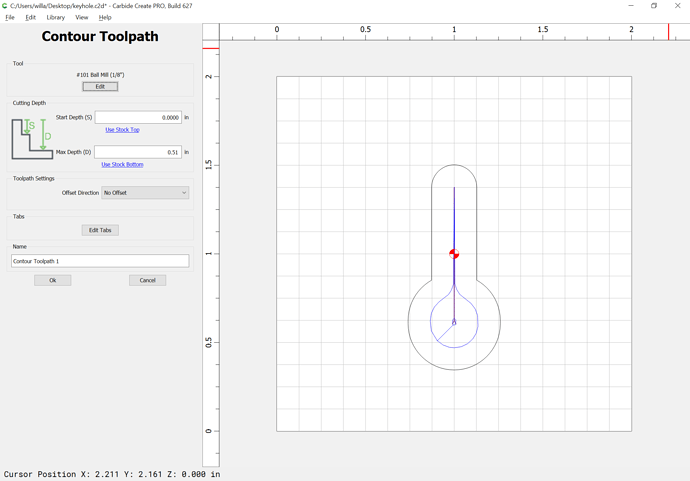 ​The previews will show an indication of how you wish to cut: 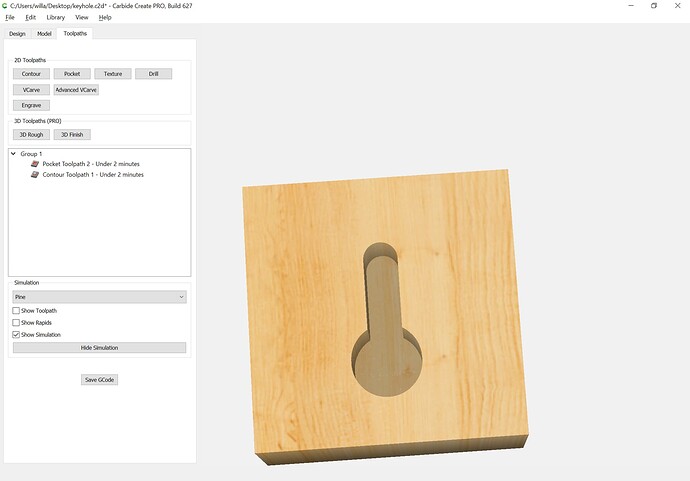 Disabling the pocket toolpath and the stock simulation allows one to verify the full-depth plunge w/ the second tool: 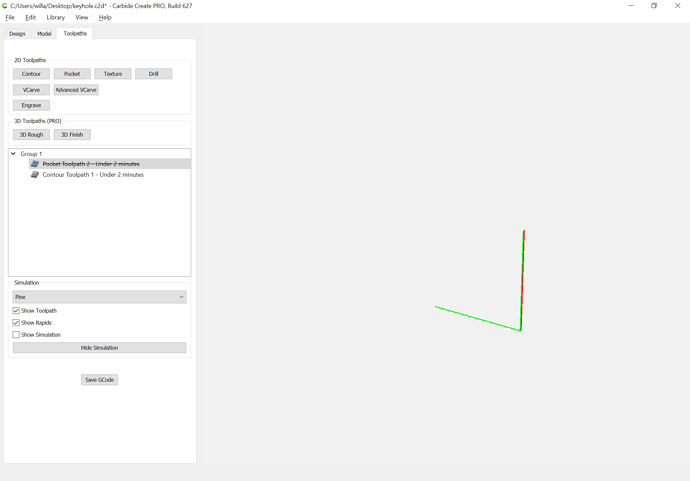 File for those who are curious:

Question:
Is it possible to program CC using a T-slot Keyhole Bit? 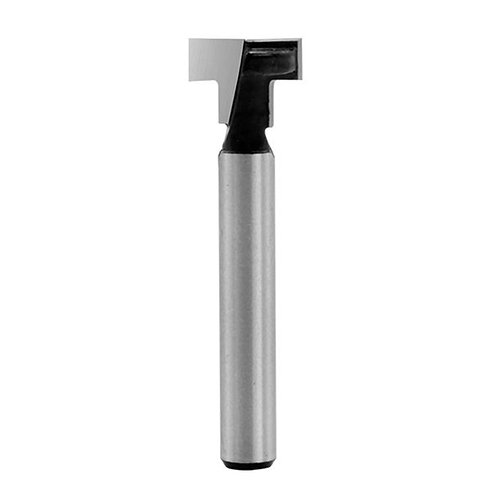 Specifically, a plunge, move in a specific direction, move back in the opposite direction and raise out?
Thinking while typing maybe a thin dual line path?
I think I know how to put this tool in CC but would be interested in your input.

I am thinking this would be useful for hanging small signs and artwork by placing these horizontally on the back side.

That is exactly what the above is depicting — the problem is, a keyhole tool can’t be correctly previewed in 3D, hence the work-around shown above.

Is it possible to program CC using a T-slot Keyhole Bit?

That definitely looks better in the preview than mine does but I went far simpler for the keyholes. I did a circle with a simple pocket and then a polyline with one end at the centre of the circle. 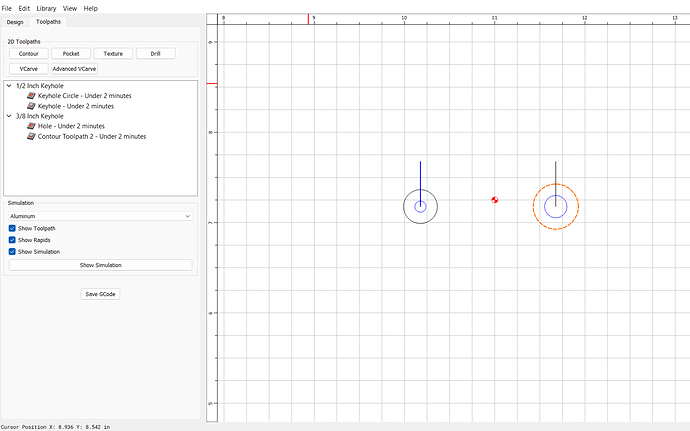 The circle I went with a simple pocket down to 0.32 inches 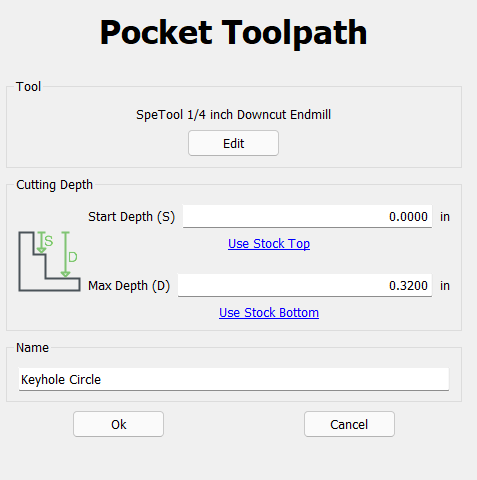 and then the polyline was a contour with a start depth of 0.32 inches and a max depth of .3201 inches 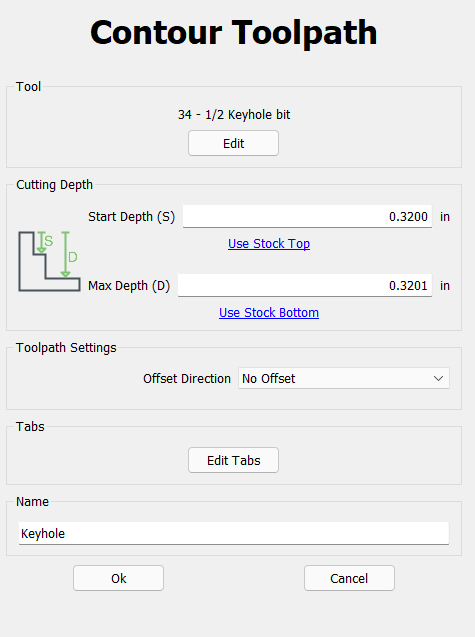 As long as the polyline started ad the centre of the circle it would go up the line then back to the circle and retract. It feels like it should not work but so far it has for me. I half expected it to retract at the end of the polyline and cause me to have the tool rip out of the wood or cause the z-axis to skip steps. i have not done this in a while so do you know if the newer versions of Carbide Create will make my method stop working @WillAdams?

I built a jig and use a plunge router. Plunge it, pull it, turn it off, back it out. Done. No programming.

No, that’s the basis of the technique I used — I just drew in the pocket because I think it’s better practice to clear the slot as much as possible.

Is it possible to program CC using a T-slot Keyhole Bit? 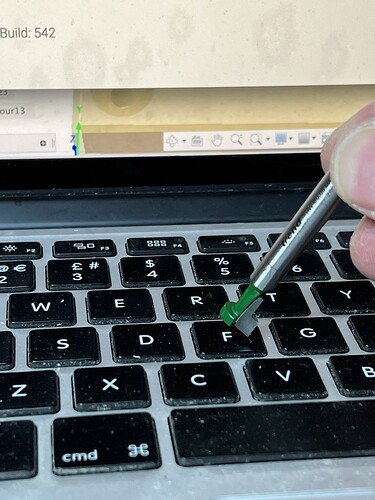 You can but it is quite slow.

More seriously, for Fusion 360 users you have to do basically the same thing, everything I’ve found so far says to use the 2D trace toolpath and draw what you want the cutter to do.

Share 2D and 3D design files and project files with anyone.

No, that’s the basis of the technique I used — I just drew in the pocket because I think it’s better practice to clear the slot as much as possible.

When I looked at the CC file, I see the ball nose in the slot from the top to the bottom.
Where does the Keyhole cutter stay at the bottom of the pocket and follow the slot both ways?

Could this be done using manual control?

Thx, about to try to use that keyhole cutter to make an undercut along the side of a slot, I am so glad that there is CAM preview…

The toolpath for the ball-nose (which is used for the keyhole tool) is set to go to full depth because of the setting of the depth per pass for that toolpath to greater than the depth of the pocket.

DISCLAIMER: I AM JUST STARTING TO LOOK AT GCODE AND EDITING THEM MYSELF IN NOTEPAD SO THIS IS UNTESTED AND MAYBE SOMEONE WITH GCODE-FU CAN TAKE A LOOK AND COMMENT/MODIFY AS NEEDED.

I looked at the GCode in NC Viewer only and it appears to do what I expected it to do. Please do your due diligence and look at it yourself in something like NC Viewer and/or aircut if you are going to use this as a starting point.

(EDIT: SOME EDITS MADE BASED ON @neilferreri COMMENTS BELOW

This is meant as just a starting point, maybe someone that is well versed in GCODE can take a look at it and suggest changes to clean it up as needed.

(EDIT: I’m not 100% sure this would be run in mm and not in inches but like I said I’m just starting to look at GCode so help needed to confirm that part)

(EDIT: Also in addition to confirming this would run in mm’s you would also need to edit the plunge/feed rates to make sure this is correct for your tools. In this example it’s the F200.0 meaning 200mm/m I think…)

If we have a small GCode file to do the keyhole operation is this something that we can use in Carbide Motion as a macro/quick action and have it saved in a library of operations so it’s permanently there ready to run?

Some comments below. (in parentheses)
I’ve done similar with KeyHoles, but I used G91 mode, so I could just jog to the location I wanted the slot and run the code from there.

It will run in mm mode as you set the G21 and never changed that.

@neilferreri agree the feedrate of 200mm/m may be too slow and perhaps discolor/heat/burn their stock but in the event that someone just copy/paste into an .nc file and runs it I’d rather the feedrate be on the low side for their tool then something bad happen. Up to whoever decides to try it out to adjust the feedrate to what works best for them in their specific situation (material, tool, machine, …).

Thanks for your review/comments, I edited the GCODE above taking your comments into consideration. As for the redundant feedrates do I just need the one on the first G1 line and the rest are redundant?

do I just need the one on the first G1 line and the rest are redundant?

Yup. A G1 sets the movement to a linear move at the defined federate. That mode persists until it is explicitly changed to a G0 (rapid linear) or G2/G3 (arc) or on reset of the controller.
Feedrate only needs to be defined when you initially set it and when you change it.