I’m on a quest to optimize the amount of X-travel I can get from my SO3, so I knew I needed to change something in the attachment scheme for my Suckit dust shoe: the ears/brackets and arms just wasted way too much width.

I don’t like spindle-attached dust shoes, so I needed a way to hold the suckit shoe to a fixed (but adjustable) Z-height, that would be as narrow as the HDZ itself.

Perfect opportunity to practice my nascent Fusion360 skills, so this is prototype v0 of the beginning of something: 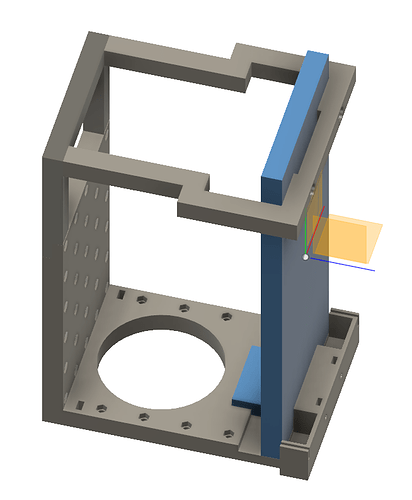 The top part is attached using two of the threaded holes in the back of the HDZ, the lower part slides onto the bottom of the HDZ, and is secured with two screws that come and push against the ones that hold the lower HDZ plate (if that makes any sense). The front plate has an array of through holes, and recesses for captive hex nuts on the inside.

A few nights of 3D printing later I assembled it: 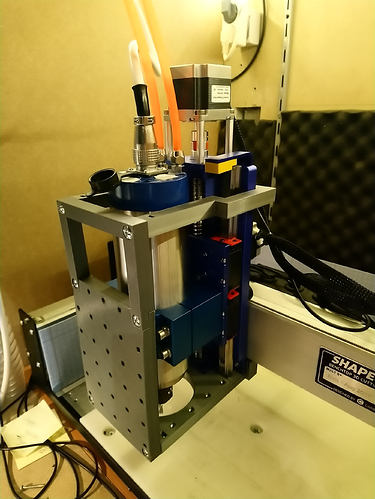 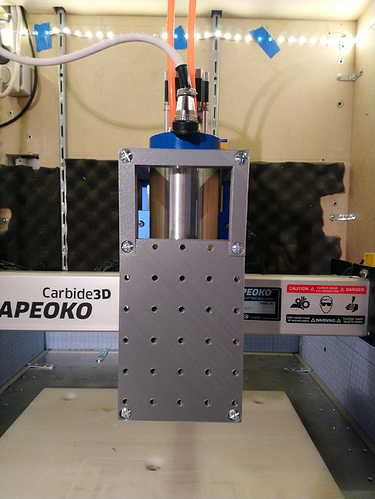 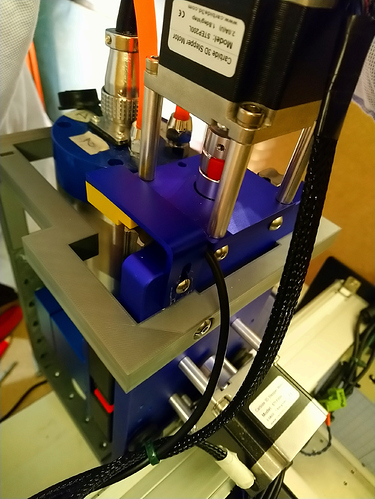 There are a few captive nuts on the sides too, in case I ever need to attach something underneath the lower piece of the frame: 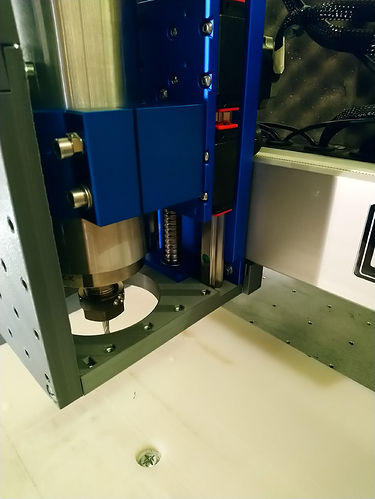 At the lower back of the HW, the plate doubles as a cover for the bottom V-wheels. I still need to insert a small strip of bristles in that small vertical slot (directly inspired by DIY Engineering’s wheel covers), which should hopefully keep my bottom wheels/rails clean. 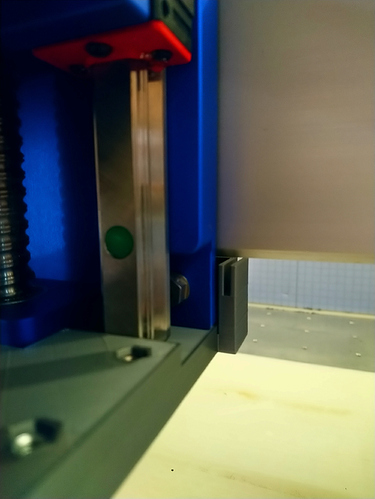 And now…I still don’t have a dust shoe mount, but now I have a nice set of fixed height points that I can use to attach the (future) central arm of my dust shoe, hose clamp, mister, laser module, etc…

Nicely done Julien. Been thinking about how to attach my laser, your accessory provides lots of options.

Looks great, I like the way this design expands the options for where you can mount your accessory. Looking forward to the sequel.

Fusion360 Sunday (side note : I can’t believe how easy it gets once you get past that initial confusion phase where nothing seems to behave like you’d expect)
Anyhow, prototype v0 of the custom dust shoe, it’s printing as I write, we’ll see. 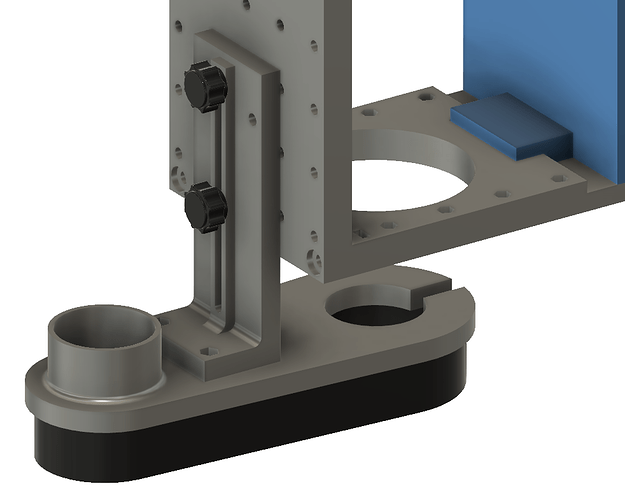 Thanks for sharing. I’m thinking I might do something similar but with the extraction hose behind the gantry.

@Griff I’ve been thinking the same thing, though without the giant spindle.

I would have loved to have part of that monster accessory behing the gantry. But I have my controller there and the back of my enclosure is too close

If I had had space in the back, I would have gone for something where the dust hose comes almost horizontally from the back (there’s this other thread somewhere from the guy who did it and sells those dust shoes now)

Sure, I’ll do a little clean-up and share it here 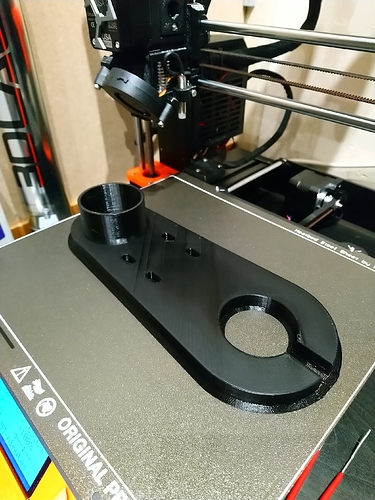 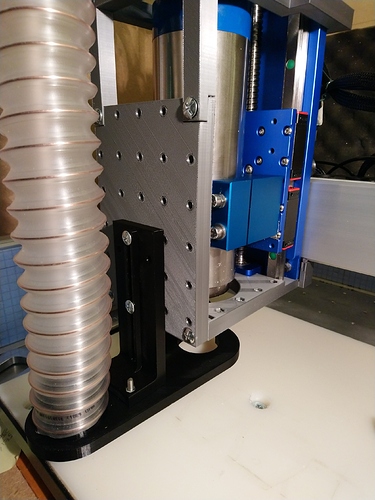 Now for the less-than-fun part, bending the metal part of the bristles I bought (intended as a dust sweeper for the bottom part of a door…), to fit it on the shoe.

Once that is done, next up is modifying the prototype to add a USB camera pointing at the cut. Acrylic is fine and all, but a live image (and the opportunity to record what the tool is doing during a full job) is too geeky to resist.

To change bits do you just lift the Z axis up and change it from the side?

Gotta love 3d printing, it really takes the think > design > make to the next level!

Off topic… how do you like the HDPE wasteboard? how do you clamp jobs? I’m upgrading mine at the moment and haven’t settled on a material just yet

The idea was to remove the dust shoe completely to change bits, much like with the suckit, hence the slot at the back. The two screws on the pic will become thumb screws, I need to find a captive version of just the right length, so that it just takes a few twists on each to fasten/detach the whole thing. Man I wish I had a McMasterCarr equivalent in France…
If this turns out to be too inconvenient, I will need to come up with a smarter design where the adjustable height part with the thumbscrew embeds a number of strong magnets, and the dust shoe arm snaps onto this for easy removal.

I switched to HDPE wasteboard sometime ago, and I will probably never go back to MDF now. I always had a strong dislike for clamps, so I don’t use them at all. As you can see I did not even bother drilling holes in the wasteboard. I use tape & glue always, and on my previous MDF wasteboard this led to tearing out the surface over time (even after applying several layers of lacquer to seal the MDF). Blue tape on HDPE holds great, and you can put/remove tape pretty much infinitely without damaging the surface. I’m not trying to spare my “waste” board either, I just like my cutting depth to be spot on, so I resurface it very rarely.

Well as expected I had the worst time bending and pushing the bristles into their groove, but finally I have a completed dust shoe that’s ready for some testing at high MRR 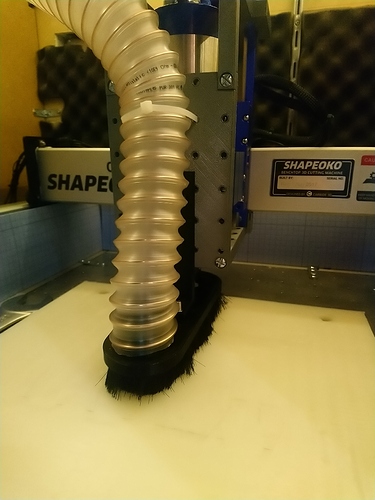 And at least it meets requirement #1 of NOT limiting the X travel: 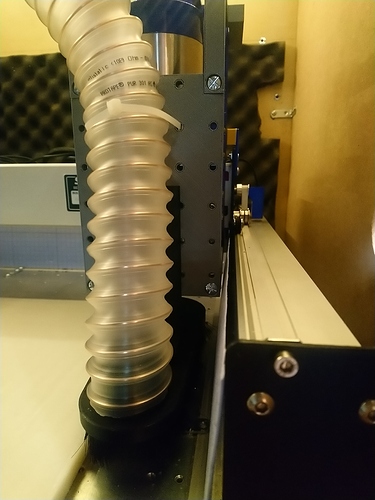 Next step, 3D printing a claw/clamp to hold the hose. And upgrade to a magnet-based attachment. And redo a larger HDPE wasteboard to be able to use that newfound X travel.

Well dust shoes are fun but I wanted to finally get to play with my new JTech laser, so I printed a magnet thing to hold it: 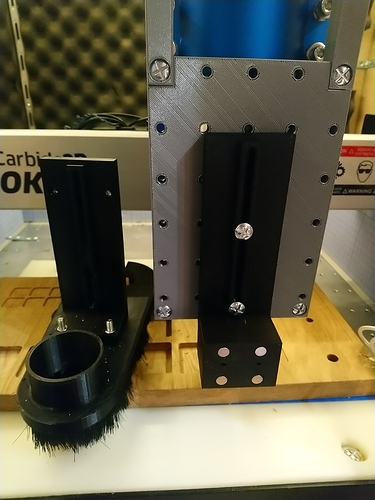 That’s just for learning the laser thing though, I’ll soon get to work to design a variation of the dust shoe that both holds the laser and sucks the air from the side (air assist for the laser cuts)

It turned out that the previous frame was too bulky for comfort, especially near the bottom where it was really not convenient when changing tools. So I went back to Fusion and designed a Mk2 version with a lot more clearance at the bottom: 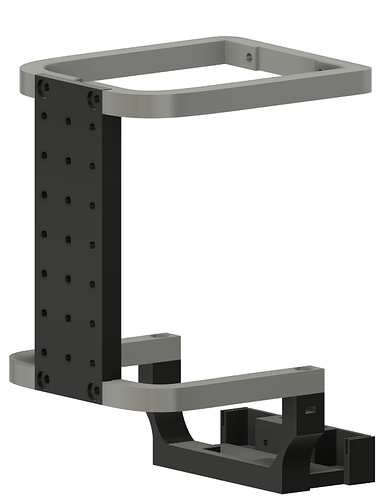 HDZ_frame_mk2.png642×818 57.4 KB
In the process I learned a thing or two about what NOT to do while editing a complex sequence of sketches and 3D operations in Fusion, to go from the original design to this.
Now the frame is nowhere in the way of the spindle collet nut: 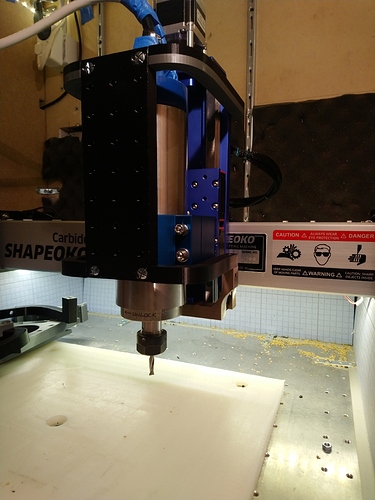 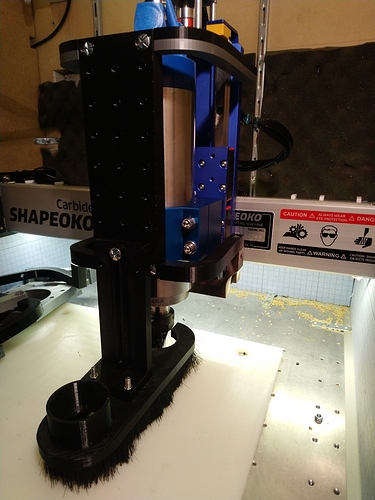 DSC_0570.JPG2930×3903 3.76 MB
Most importantly I still have full X-travel capacity (designing that curvy thing to clear the Y rail was not funny though) 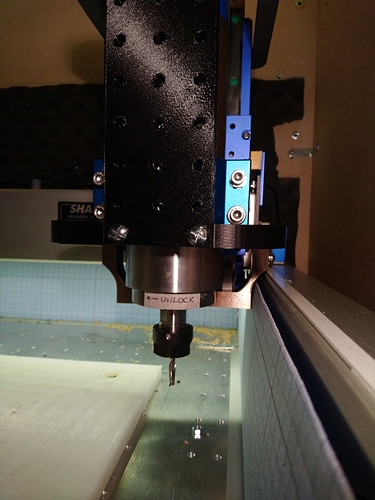 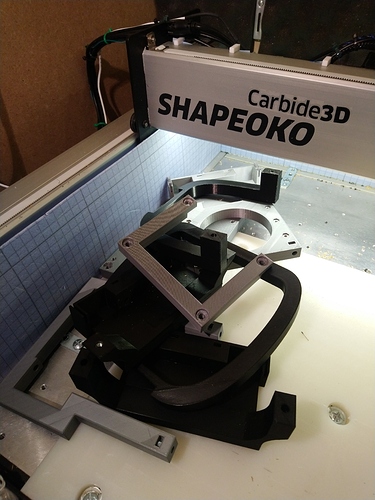 How long/wide is your actual boot? It looks a bit narrower and longer than a suckit, do you find it picks up as much as the suckit?

I’ve recently upgraded to an HDZ and still running without a dustboot, I’m still playing with designs, trying to design a boot that has the hose at the rear. Pity I lent my 3d printer to my brother!

the dust shoe is approximately 8" x 3", so yeah a bit narrower and longer than the Suckit. So far it’s been working fine, but I also went from the cheapest possible vacuum cleaner plugged on my cyclone with ~1" tubing, to using a Festool with 2" tubing, so suction/air flow got better too so I cannot really compare

I’m slowly getting to the point where I have something usable.

I added a hose clamp, and magnets to install/remove the dust shoe easily (just like sliding the dust shoe in the Suckit arms allowed, but without the X travel penalty now): 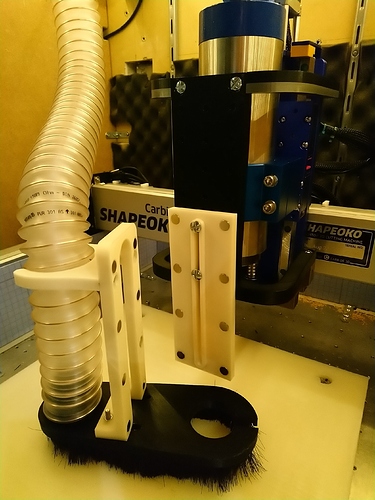 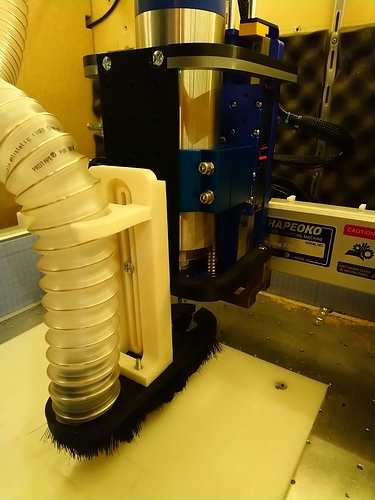 Now that the design is semi-final, I’ll probably do a few final design changes and reprint all parts, to not have 4 different colors in this thing (which happened because I ran out of black PLA…)

I like it, are you going to leave the bolts for adjustment?

that I will use instead of those bolts, I made the opening in the outer part large enough that they will fit and let me put my fingers in there to give them a slight turn to unlock, slide the arm at the right height, lock it again.

It’s a little bit awkward since the hose is in the way, but for something that needs adjusting once per job, I’ll call it good enough for now. Retrospectively, I should have designed something where the slide lock is accessible from the side.

Now that everything is in place, I’ll use it for a while to figure out how usable it really is, and then get to work on reworking the dust shoe part to integrate a light & USB camera. Oh, and maybe actually cut something WITH the machine rather than cutting/printing things FOR the machine