A pretty cool Carbide Create feature for introduced recently, so this 19th challenge is about putting it to good use!

Rules for this 19th challenge: 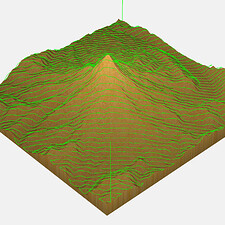 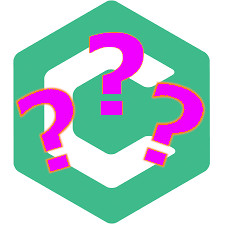 You’ll get some swag too: 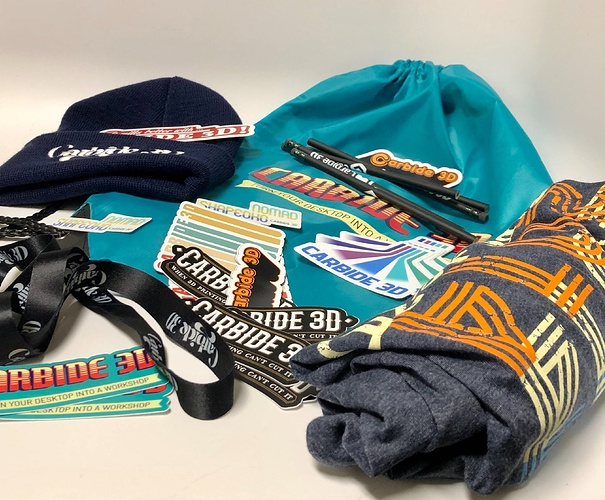 Whats the policy for using copyrighted images for this contest since we will be putting the design on cutrocket.

How much of the job needs to be done with the trace feature. I have an idea in mind, but I’d be adding some holes manually.

I suspect as long as there’s one traced element in the project we’ll leave it up to the voters to decide.

That.
Voters should (and probably will) favor projects that best match the “spirit” of the challenge theme, showcase an interesting way to use the feature, etc… but by all means use whichever additional techniques are required for your project.

I’ve had a project on my to-do list for awhile now, just to make a simple (but big) rotating platform (aka a “Lazy Susan”). I had purchased the hardware off Amazon and a simple 24" round disk from Lowes.

I had not planned to involve the CNC in this project. Until Carbide 3D announced the Carbide Create “Trace Image” feature, so I decided to check it out. Given the project was a round circle, and remembering the REALLY COOL map that @steveJ made, I decided to try the earth.

After scrolling through some google search results I found this image… 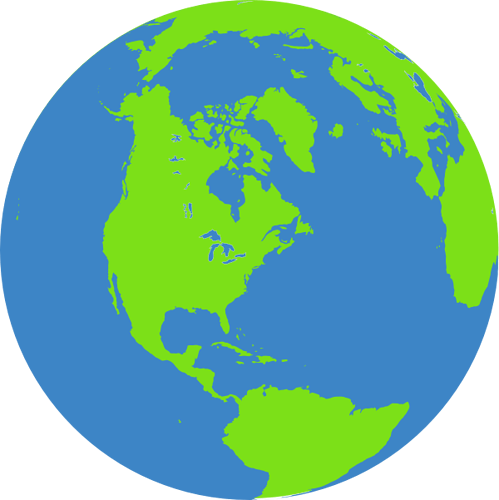 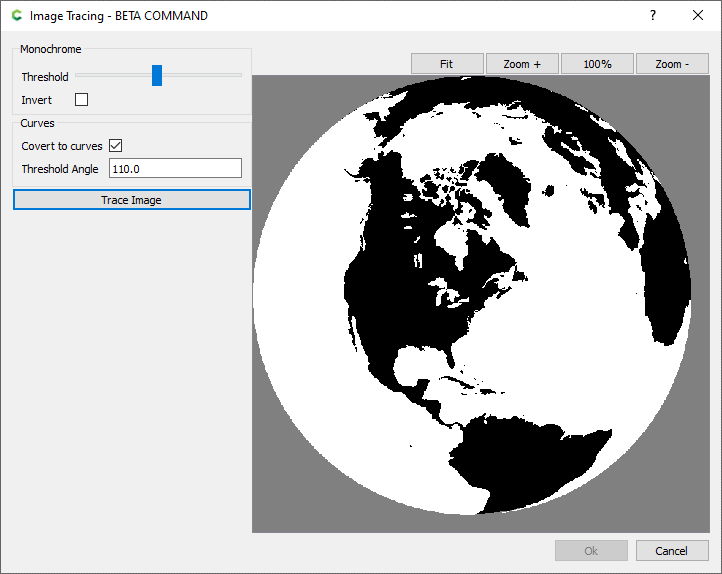 I then took some time cleaning up some of the details (mostly deleting tiny objects I didn’t want).
And then resized it to fit within a 16" diameter circle object that I had added. At this point I had spent maybe 15 minutes in Carbide Create. 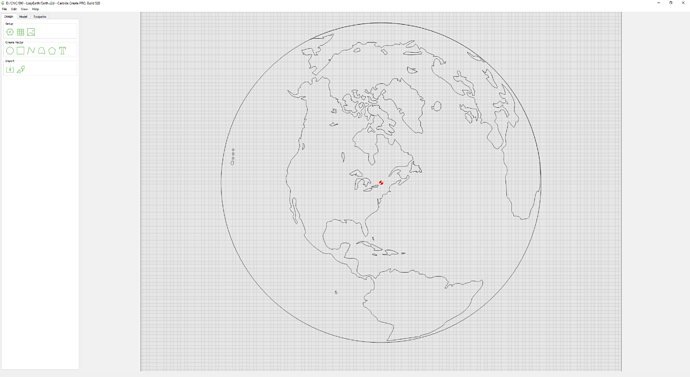 I then worked on the toolpaths. My goal was to pocket out the area that was water. So I started with a 1/4 bit in a pocket operation, that would do most of the work. 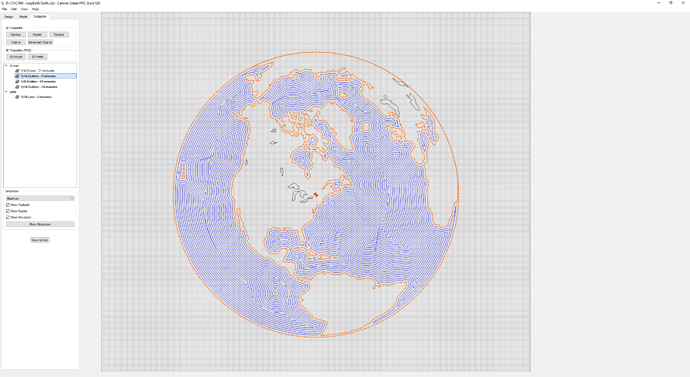 I then followed that up with a series of contour paths to clean up the edges and details the 1/4 bit didn’t fit into. I added several just to see what kind of details would be revealed with a 3/16th, 1/8th and 1/16th bit. I kept all three just so I could watch and see the differences as they didn’t add much additional time. That took care of the oceans, I used an additional toolpath for the lakes because of the reverse selection (working inside vs outside). The entire job was estimated to take 59 minutes.

I stained the 24" circle of 1" thick wood. Positioned it in the center of my work area (I have an XL) which is why the Earth was sized to fit inside a 16" circle. And then watched the Shapeoko work it’s magic. 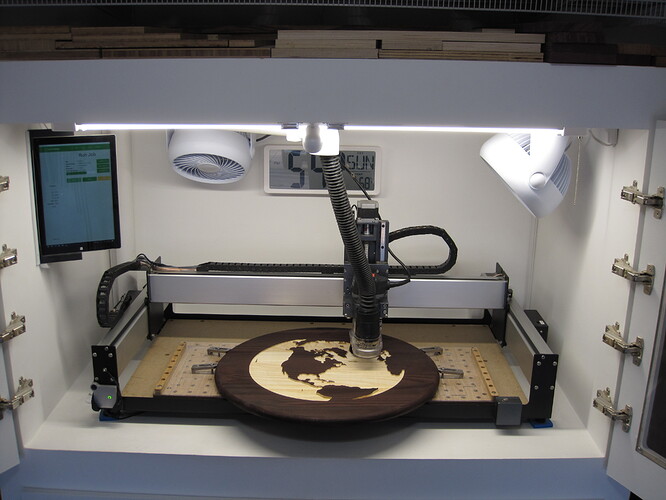 The pocketed out water area was then filled with epoxy/resin and WOW did it turn out nice. 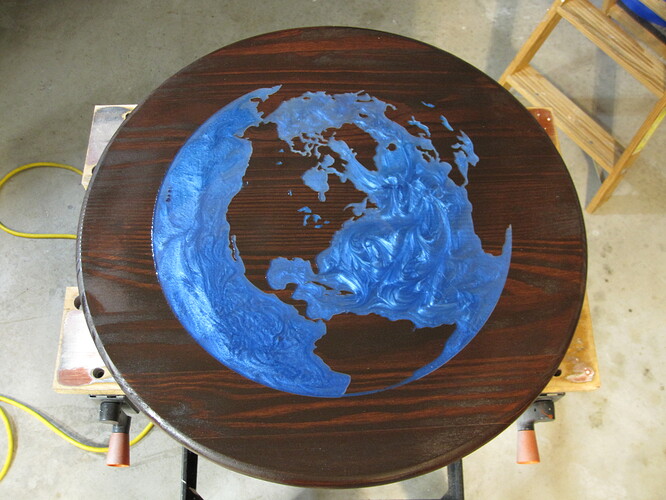 Thank you @robgrz for the new Carbide Create Image Trace.

Thank you Robert, it looks fantastic and is a testament to the usefulness of the new tracing feature.

For some reason my brain wants to see some kind of water dragon over a dark background rather than continents surrounded by oceans…equally cool.

Also, I can’t believe how tidy your machine and enclosure are

Looks GREAT…
I saw something about the new tracing feature… How does one get it?

Well still working on my entry but my 9 year old finished his early. I won’t be posting any files and such for legal reasons I guess but figured I would share his cause he’s super excited.

He’s wanted a lighted sign for his room lately and figured this would be a good small test project for me.

Anyway he did the design work and all the mouse work using carbide create and the new image tracer. I just coached him thru what to click and draw and then did the actual router portion and built the shadow box from leftovers from a recent project.

After image tracing the logo was broken up into 3 parts to give the lifted effect shown and the background was designed as an oversized block. all parts were painted and then We added an led strip under the shadow lip for color effects. We decided to leave the background white to show the different led colors as they flash.

Reminds me of working with my dad on projects when I was about that age, well done!

I scanned in a few keys with a flatbed scanner, this prevented any sort of distortion that I would have got taking a photo. I then spliced the ‘teeth’ from one key into another key to make a longer than usual ziggy bit. (I’m not a locksmith, I don’t know the names of the parts of a key.

long-key1690×641 17 KB
I did a bit of cleaning up of the trace, honestly would have been better to manually trace it for cleaner geometry, but this contest is using the tracing feature. I added a series of holes, slighly under a 1/4" for the carriage bolts.

Cut from about 1/2" oak, with the carriage bolts installed. One day I’ll build a proper light box, but I think the reflection looks pretty cool in this picture.

The bit of a key is the part that actually engages the locking mechanism of a lock. (For example the tumblers in a pin tumbler lock.) The exact geometry of modern keys is usually described by a code system. This is referred to as the bitting. The bitting instructs a locksmith how to cut a certain key, to replace a lost key or make an additional copy. The bitting is usually a series of integers (e.g. 372164) that is usually translated from a key code chart or from a bitting code list to settings...

How timely! My first V Carve project is to make a wooden sign with our dog-showing kennel name on it, and I had just started learning Inkscape to try that. With the new tracing feature, I can do it all in CC.

The logo is a scan of some commissioned art work. It was enormous - about 19,000 by 7,000 pixels. I decided to clean it up a bit first, and eventually produced a smaller version that seemed suitable:

Ran the import, and after a few minutes of thinking:

You can find the design file here: 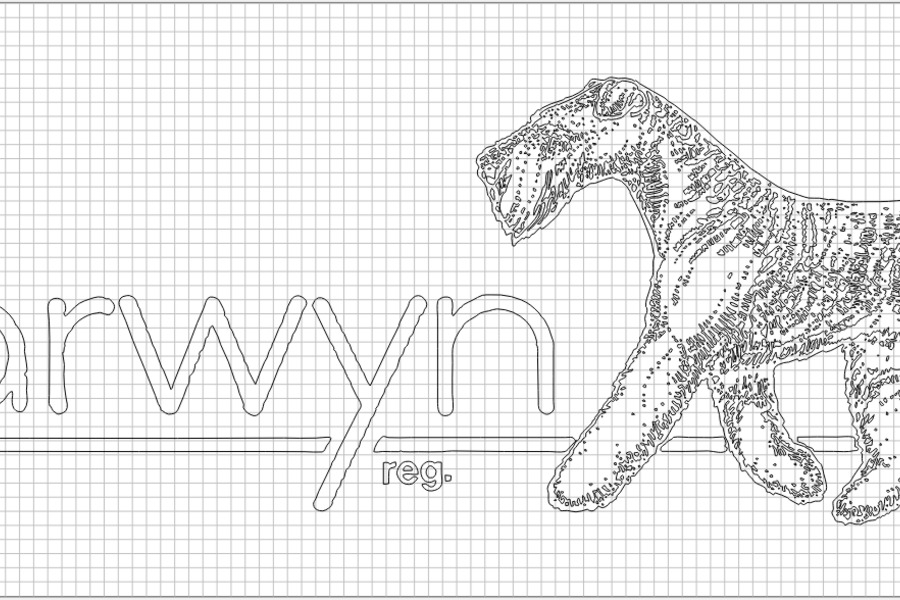 A V carve of the logo for our kennel, Darwyn Welsh Terriers.

The design size is about 22"x 8.5". The size is a bit bigger than my planer, so after I flattened a piece of wood as well as I could, I flattened it on the CNC, routed the edges and sanded everything smooth.

To help stabilize the wood, I gave it two applications of sanding sealer, sanding down to wood each time. The wood is something that I’ve had for ages, and never knew exactly what it was. I think it’s a figured maple, but the color makes me a bit uncertain. It was obvious from preparing it though that it was both dense and hard.

Likely from all the sanding, I think the thickness of the wood is just a bit variable. The first pass left off some detail around the head and the rear legs, so I re-zero’d down 0.25mm and re-ran the whole thing. There’s still a little bit of detail missing, but I thought this was an excellent place to stop, before the carved sections became too ‘heavy’.

I will be finishing it with an epoxy flood coat, but before I do this is what came out: 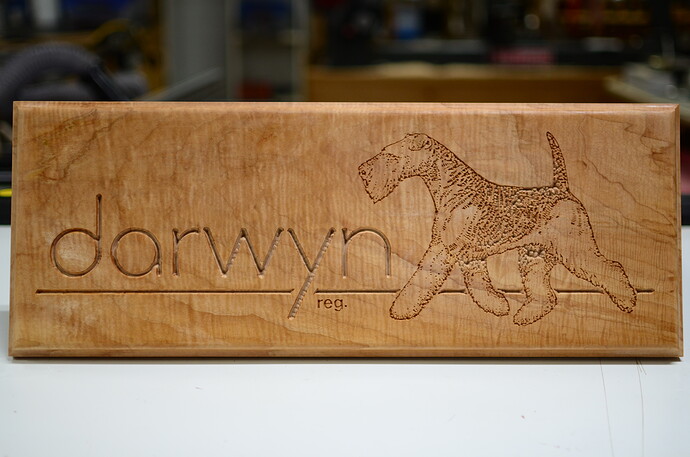 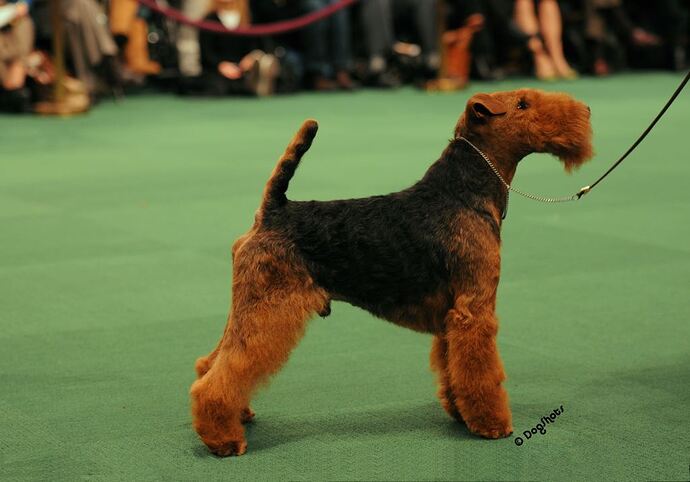 I think it will make a great addition to the front of our house.

I wanted to see how far I could take the image tracing function. I was determined to take it beyond the normal vector type shapes I was used to.

I thought it would be interesting to see if I could trace an illuminated manuscript. The image below is from the Birds Head Haggadah approx c. 1300, which is timely as this weekend is the Jewish festival of Passover. 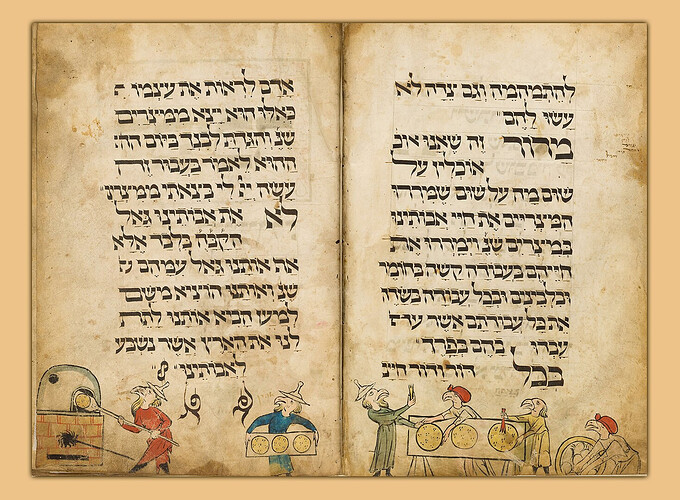 While I could have taken a more modern Haggadah image to replicate with less noise, I decided this would be an appropriate test of the new feature as it was done prior to the days of mass manufacturing.

I was very nervous on how the spotches would influence the capture and whether the background noise would permeate through the scanning feature, however the image capture results was amazing.

Here is a screenshot from Carbide Create. 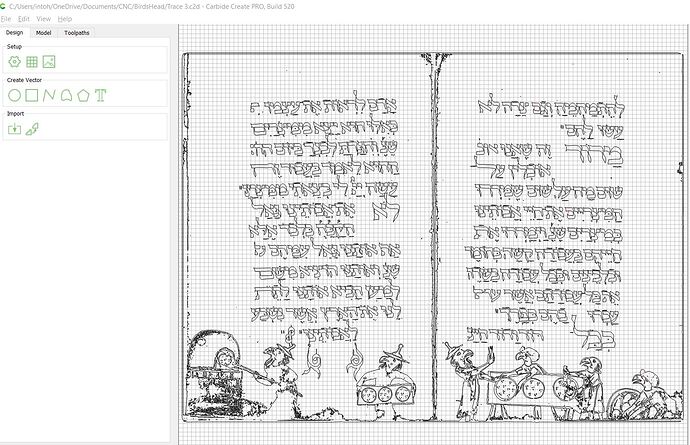 Little side note I originally tried to scan the original 6000px x 4412px image, but took way too long. I ended up going with a smaller version (Link to image here)

Next step was to vCarve this. I personally have not had much luck vcarving in Carbide Create with this mount of detail, so I imported it into Vectric Vcarve.

There, I removed a few vectors that were noise associated with the old manuscript and modified a few overlapping vectors. 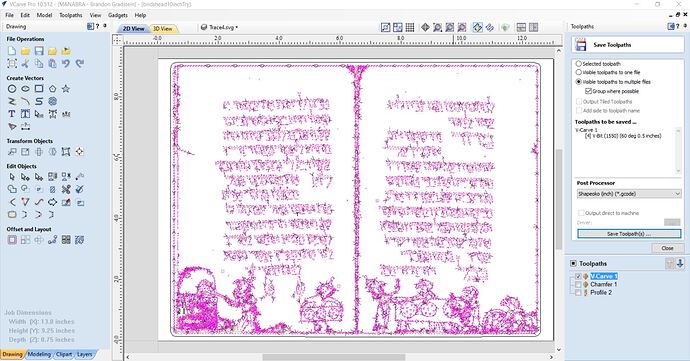 I then took a piece of 13” x 9.25” x 3/4 inch red oak hardwood that I purchased at Menards and gave it a quick coat of shellac prior to vCarving

Next I used a 60 degree vbit from Whiteside (1550) to carve into the wood, and the result is the following 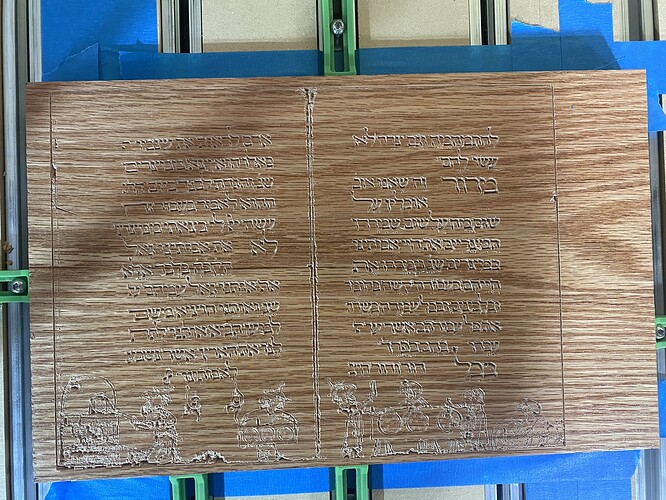 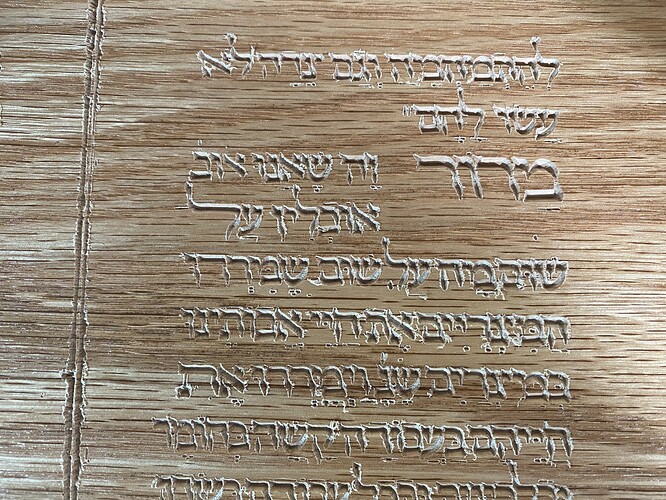 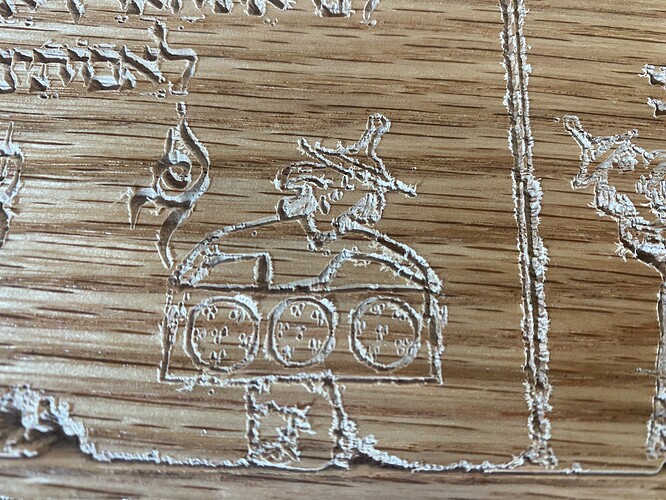 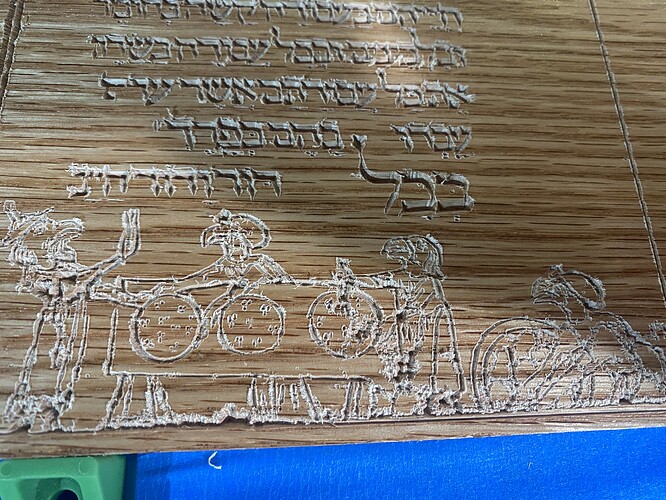 What’s unreal is that the carve included all the nikudot (which is the little dots and lines around the text). Additionally the image is true to the original.

It would obviously look better if it was twice the size, but am really happy with the result.

The next step is to cut the vcarve out of the wood, but was wondering if I should take any of the following steps prior

Summary:
In terms of results of the image trace, I am extremely impressed. While not the most polished piece of woodworking, I feel this was a worth edition to the Community Challenge as it really gave the new functionality a workout.

Last Note
I could see others converting illuminated pages from the New Testament, using epoxy and selling these on Etsy…especially if they look like stain glass cuts from @MikeG and @AndyC … see this thread Epoxy Gift Coasters - #73 by MikeG

Lovely! (I have been very impressed by the auto-tracing functionality, and it’s made tech support a lot easier).

My inclination would be to ebonize the wood (which will penetrate a bit) then apply a lightening stain which will sit on the surface, then carve — in theory the edges (which are the hardest thing to do) will be darkened by the ebonizing and all you’ll need to do is fill in the bottoms (or not, might be a neat effect).

As w/ any finishing experiment, try it out on a piece of scrap first.

I’ve seen good results from folks running the same toolpath a second time which cleans the edges some, though I haven’t tried that specific procedure myself.
Great idea and execution on your entry!

Nicely done! I’ve a family portrait that I’ve been thinking about getting a laser to do, you’ve inspired me to give it another try with CC Tracing.

This falls out of my love of abstract art and fractals. The original image is taken from a fractal generation program on the iPad called Frax. I also ran a few filters on it to beef up the contrast, which gave me this: 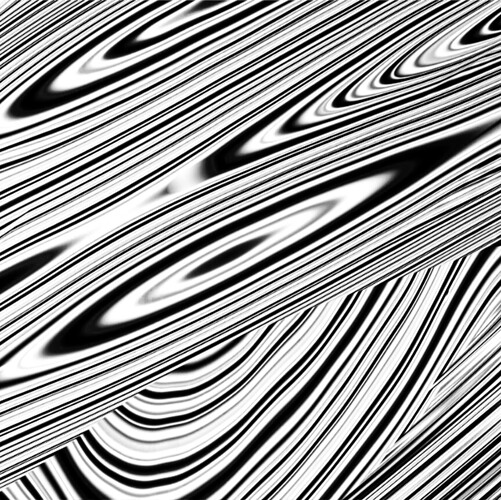 I ran the tracing program in Carbide Create which worked very well for the most part. There were a few spots like the one below, where I had to go into the node editor and clean things up. 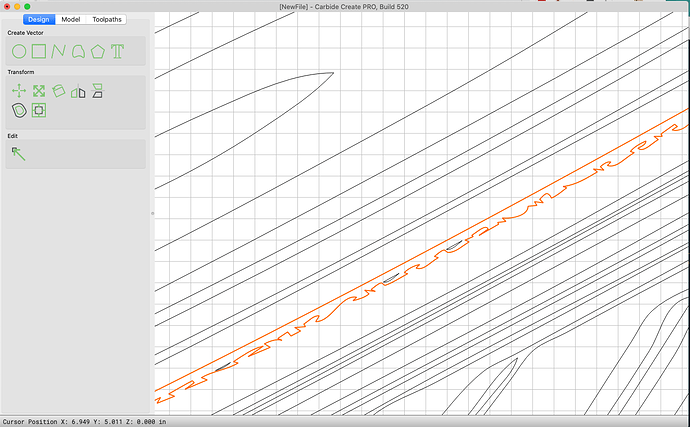 BTW: The use of the “D” key to delete nodes and the “delete” key deleting everything lead to quite a bit of swearing on my part.

The final result was in 3/4 plywood (I had no thick MDF on hand, which likely would have been better). The plywood was dyed in Chestnut Products Spirit Stain Royal Blue and then gold acrylic paint was worked into the grooves. I was pleased with the result and really excited by the new feature. 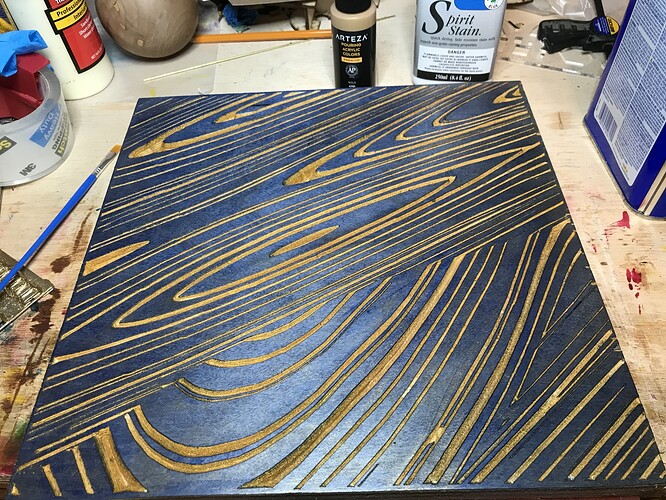