Flexible hose for the Sweepy

At 0:50 in this Carbide 3D video for the Sweepy, there is some flexible hose shown.

Does anyone know what make and diameter it is, please? I’m hoping to find hose this flexible to connect the 50mm adapter from the dust extraction ducting to the Sweepy v1.

Hey guys, I’ve been working on an officially-sanctioned-but-still-unofficial dust management device for the Nomad. Previously I’d designed something that would take a vacuum hose and basically clamp it to the spindle, which was good enough to capture the airborne nasties that would escape from cutting MDF and stuff, but didn’t have a brush. Enough people sounded like they really wanted that extra option so I threw a concept together. [IMG-3872] This is a two-part dust shoe that works just like…

but @wmoy would have to confirm.

Uh, that’s a Rockler purchase link (and it is a sale price, normally it’s $40) — did Jeff Bezos buy them or something?

Last I heard they were a family-owned business:

Or do you mean that the best purchase price you can find in the UK is on Amazon.co.uk?

Amazon price in the UK.

It might be cheaper to order it from the US!

There is cheaper hose available over here, I use this stuff

But the Rockler kit with the hose adapters is nice, they do seem to do good stuff, shame UK prices are so much higher than dollar, I had to print my own to connect my system up 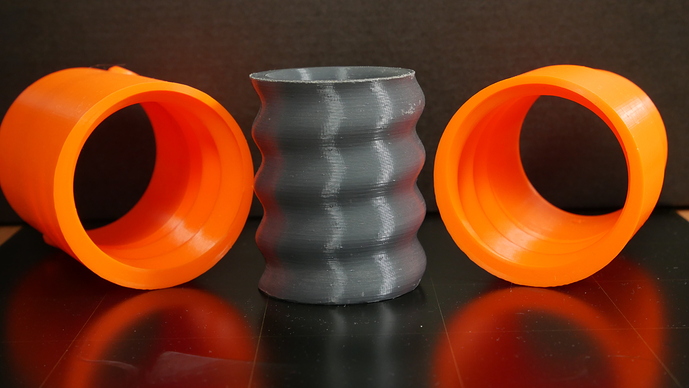 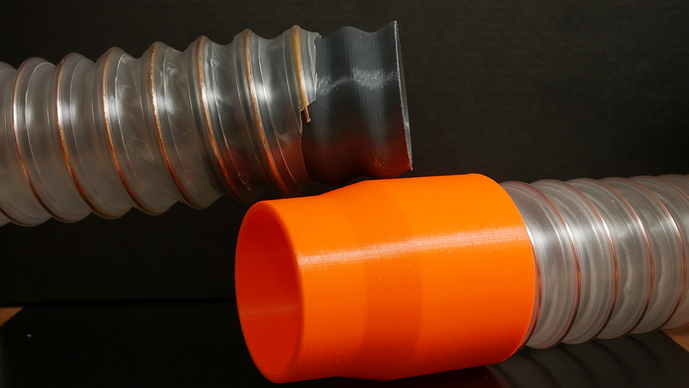 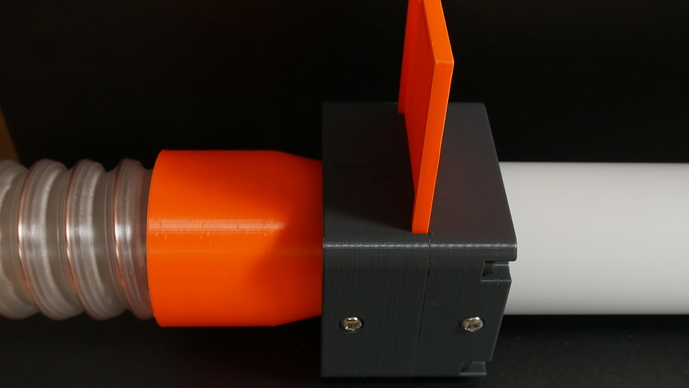 Actually, I’ve got a length of that in my Amazon basket! I just need to know if it’s as flexible as it looks, given the low height of my enclosure. I’ll need to work out how to connect it to the Sweepy, though.

I don’t mind spending the money, as long as I can get it to work!

How flexible do you need it to be? I can go measure / bend / test a length and see for you tomorrow if you like.

I would suggest sticking to the biggest bore flex hose you can, the reduction in flow as you go to smaller hose diameter is quite significant, especially with this spiral profile type hose. Making the hose longer as you plumb stuff in also adds to flow loss.

If you have a 3D printer I have the Fusion 360 files I used for those screw on / screw in hose ends if you want to adapt them to Sweepy.

I’d be interested to ‘hear’ how noisy / quiet that vac unit is when you get it running too.

That’s very kind of you, thank you, @LiamN

Using the 50mm hose would be my preferred option too, if it’s flexible enough. The problem for my setup, is the connection to the trunking is the ceiling of the enclosure, but not quite in the middle of the cutting area. With the Sweepy directly below the port, there is a horizontal travel distance of 480mm to the back left, 470mm to the back right, 790mm to the front left and 765mm to the front right (when moved bty hand, so cutting area would be less). The port is 385mm above the top of the Sweepy when they’re in line (i.e. the shortest distance). To be flexible enough, it would need it to cover all those points without tangling or fighting back and causing extra ‘stress’ on the router. To be honest, I didn’t realise the ceiling port was so off-centre until I measured it today (the Shapeoko was moved from it’s original position) so I could relocate the port to be more central to the movement of the Sweepy, rather than the wasteboard - a schoolboy error! I’ve already re-designed the installation so often, doing so would be almost predictable!

This is what it looks like at the moment: 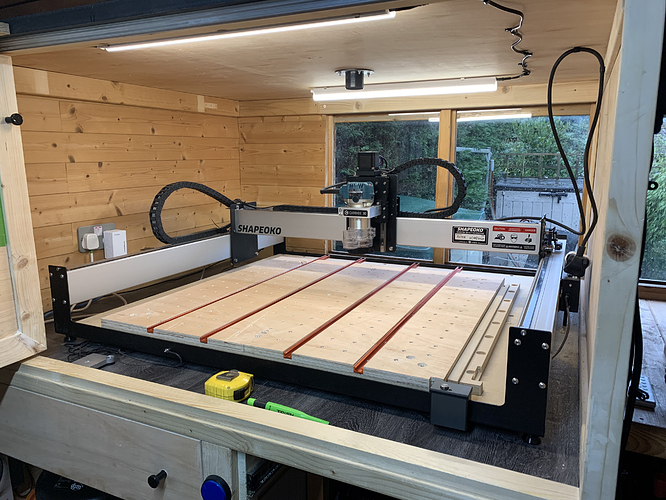 One consideration for thinking about the Rockler hose is that it appears to expand and ‘retract’ as it’s used, which I guess the 50mm doesn’t do?

I don’t have a 3D printer - and buying one is definitely on the cards for the forseeable future - but thanks for the offer!

The PU antistatic is definitely not going to be sufficient on it’s own between that top port and the sweepy, if there’s enough length to not pull out in the corners there’s enough to get tangled up when sweepy is toward the middle. Mine is hung from a ceiling over a meter above the machine and I still tie the hose back across the Z motor to ensure it can’t get in front of the carriage.

There’s quite a few threads on here where people have made various forms of hinged arm or runner track to support the hose above their machine to assist in keeping the hose out of the way of the machine without creating too much tension. You’d probably end up moving the port to one side or a corner with that sort of setup.

I kinda thought that would be the case

I’ve has some dust extraction success with smaller (but stiffer) hose, but the flexibility was rubbish, so maybe I’ll try the Rockler and see how it goes. It is supposed to retract, unlike the stuff I’m using, so maybe that would help.

Or, maybe just take the top off altogether and suspend the hose from the shed roof. I do like the storage up there though

Searching the forum for
https://community.carbide3d.com/search?q=dust%20hose%20arm

brings up some threads worth looking at for ideas

Just wanted to chime in, After seeing @Dusty.Tools post, I bought that Rocker adjustable dust hose arm for my setup and it is PERFECT. Highly recommend for anyone with T-Track or Aluminum Extrusion near their machine. [Rockler]

I’ve been struggling with a dust collection system for my XXL. I’m considering a retractable arm that the hose would hang from and would be on a french cleat mount that could be move away when not in use. Anyone have any designs they are willing to share? Here is my deign so far. [Screen Shot 2020-06-07 at 12.47.09 PM] Sorry if I’m bring back an old topic.

Talking to Rockler, they seem to think the 1:4 ratio of ‘stretchiness’ would be fine if I cut the hose to 12" compressed as the maximum length would only be about 36"

I was thinking of securing a section of the hose to the Z stepper motor with a cable tie (or clamp) so that part is supported. The rise height of the Z axis shouldn’t be an issue.

I think it would only need to be a figure of eight with a square part to fit over the motor and a round bit to fit the hose through. Hmm, I’ve got a Shapeoko that could do that!

I’d be interested to ‘hear’ how noisy / quiet that vac unit is when you get it running too.

My sound level meter app shows an increase from 30dB(A) to 83dB(A), if that’s helpful?

That’s just running the vac, not the router, Shapeoko, Led Zepellin, etc. with the meter anywhere in my ‘workshop’ (shed!)

Hi, when you say had to print your own, did you design the 3d printable parts or are they available online?
I have the identical hose from Amazon but have yet to connect it up because I have not had chance to draw up fittings. If these are already online then that would save me a heap of time.

I designed my own but if you’d like the Fusion360 models or the STLs I’m happy to share.

Thank you for the offer,
They would be much appreciated Liam as it will save having to redraw / design something that exists. Happy for either Fusion360 or STL files.

The Rockler hose and fittings arrived today and I have to say the flexibilty and retraction of the hose is awesome (at least when it’s new) but, for my installation, not so much for the fittings. They’re quite long, reducing the ‘flexible’ gap between the Sweepy and the ceiling port by 280mm - i.e. leaving me 100mm to play with.

Most of the models are parameterised to some extent to assist in tweaking things to the right ID or OD for the hose and pipe fittings you’re trying to adapt to.

There’s four models in there;

The gate valve for my 55mm waste pipe 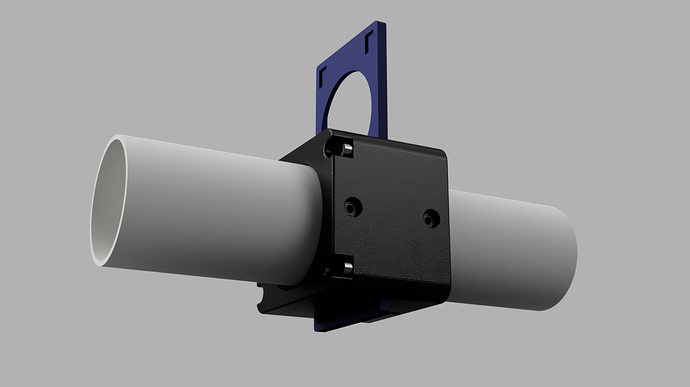 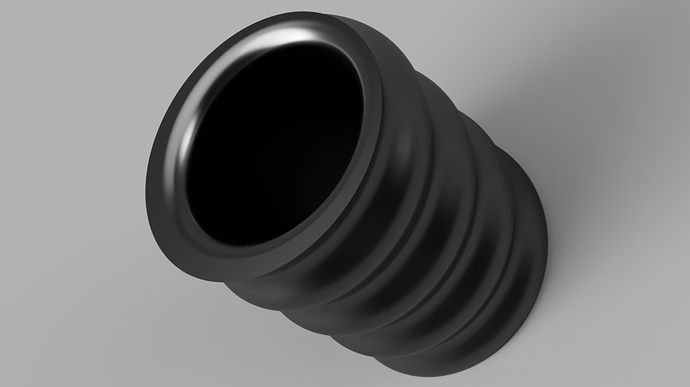 A threaded outer to inlet of the gate valve adapter 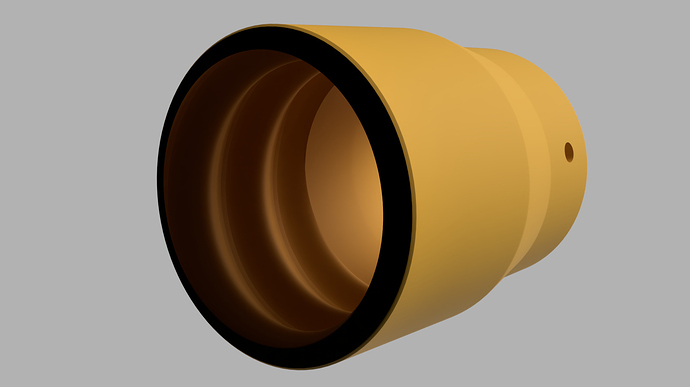 Another threaded outer to pipe adapter 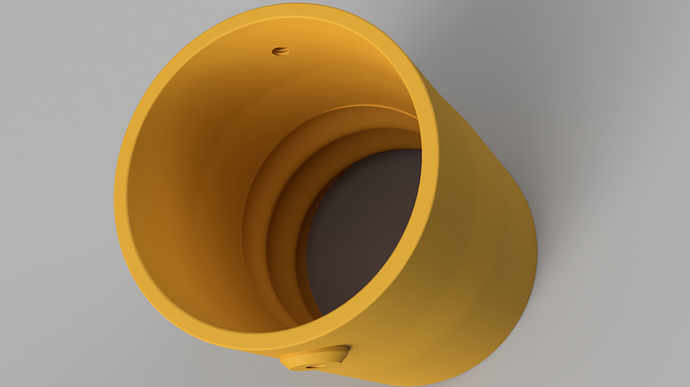 Thank you for these Liam, really appreciate this.