It can directly do dovetails — you just need to make a jig and create the toolpaths manually and create the cuts without any sort of 3D visualization in Carbide Create — you might be able to find a 3rd party tool for this: https://www.shapeoko.com/wiki/index.php/Previewing_G-Code https://www.shapeoko.com/wiki/index.php/Previewing_G-Code

There is a file on the link which you didn’t click: CNC Box (Finger) Joint Box

Yes! I am glad that you agree that Carbide Create can do it. I was doing it manually and then i got frustrated and decided to reach out to the smart community. Sounds like you have done it manually before can you please share your carbide create file.
Thanks

One concern I have there is that is a very small bit for such thick stock.

Top and bottom of the box weren’t specified either, so I picked up some 1/4" (5.2mm) lauan plywood which will float in grooves.

How the box will open wasn’t discussed either, so we’ll do the traditional cutting in half.

First up we’ll model the box in 3D.

Actually, it’s been a long time since geometry in high school.

Instead, it’s more straight-forward to just draw this up — we start with the endmill itself since it and the stock dimensions as discussed above are the fundamental constraints. 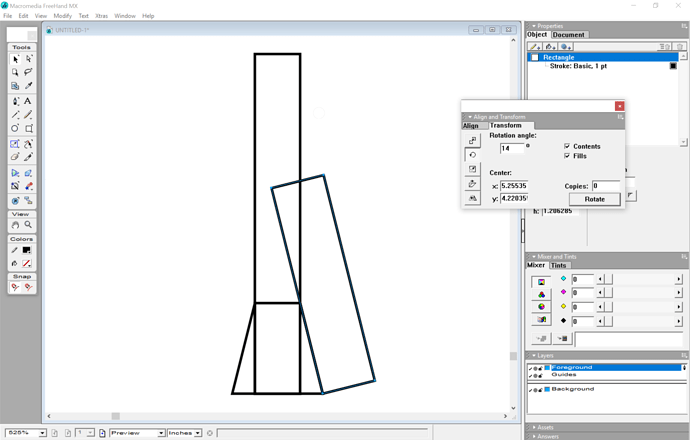 Since the dovetail bit we have selected can only cut to a depth of 1/2", we have to leave 1/4" uncut for the blind dovetails, and we have to determine if we will draw up the pins or tails first. Folks do it both ways, and there are numerous arguments for tails first:

When it comes to dovetailing, I’ve never really had a dog in the fight between dovetailers who cut the pins first and those who cut the tails first. I was first taught to cut my tails first…

We’ll do tails first since that is the board which is held vertically and a bit easier to visualize.

The next consideration is how many pins / tails there will be — as noted, we are constrained by the endmill geometry in a way that we are not when cutting by hand, so the tails have to be greater than 0.5" at their largest dimension, and must be at least 0.25" at the base. With a 5" tall box, we will simplify this and have 5 tails/pins, with a half pin at the top and bottom.

One way to do this visually is to draw up a side view of the tails, evenly arrange the tips and then use the drawn up tool to line things up: 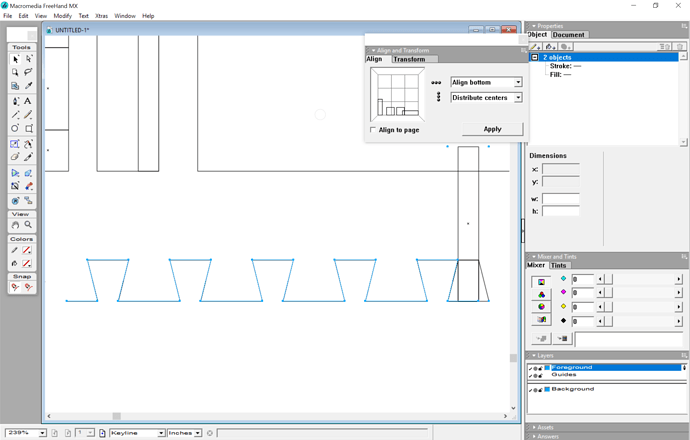 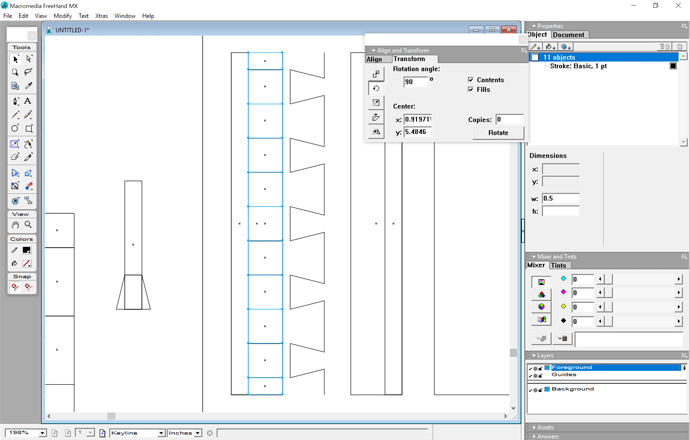 One has to consider that one will be working with a 1/4" endmill which will be cutting from the center out in Carbide Create, but the actual path ultimately will be the dovetail bit which will cut a 1/2" diameter at the bottom. We will need to leave clearance at blind side to ensure the dovetail bit doesn’t blow out, and overcut on the other to ensure that we will have a clean, square cut of the sides of the tail — drawing in some circles will help to visualize this: 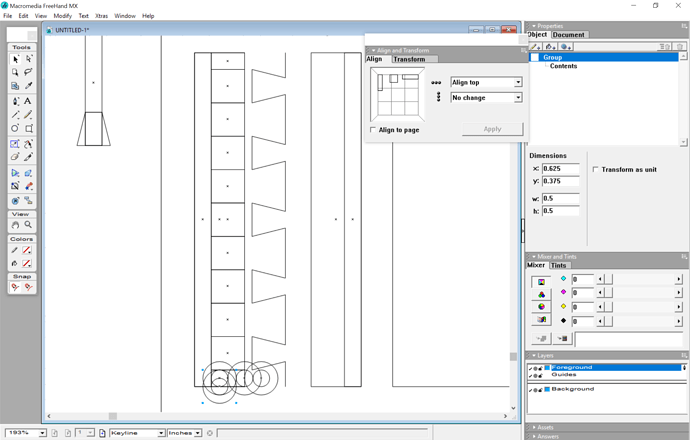 This results in the following areas which need to be cut from the end of the board to make the tails: 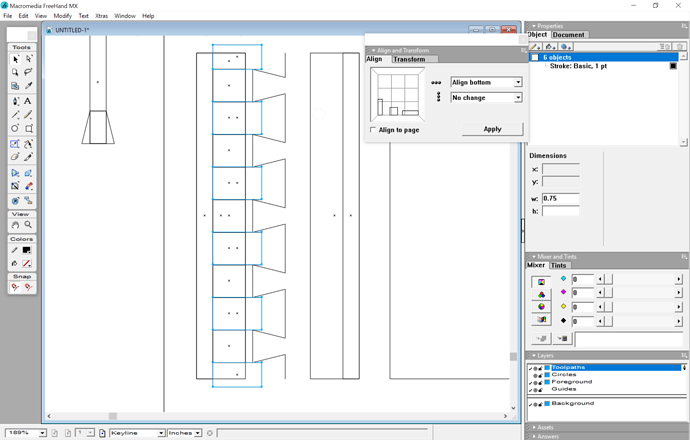 Probably it would be best to make two cuts, one with a square endmill to clear the center, then a second cut as an inside contour pass with the dovetail bit — note that it will be necessary to work up the path so that it plunges from a point where it will not remove material which needs to be preserved.

we have to leave 1/4" uncut for the blin

WillAdams this is some awesome work you have done do you have a copy of the carbide create file? I am confident if you provide the file I can do some additional work on top of the great stuff that you have done. What is the best way to upload the file to the forum. I am sure others will benefit from this too.

If you follow along you should be able to make your own Carbide Create file.

For the pins, just add some circles to help envision how the toolpath should work: 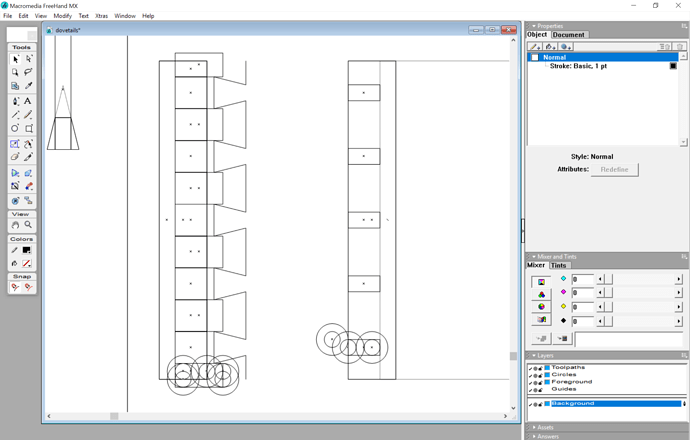 Then go back and adjust paths as needed for:

Drawing in the toolpaths, one can verify them by assigning suitable strokes: 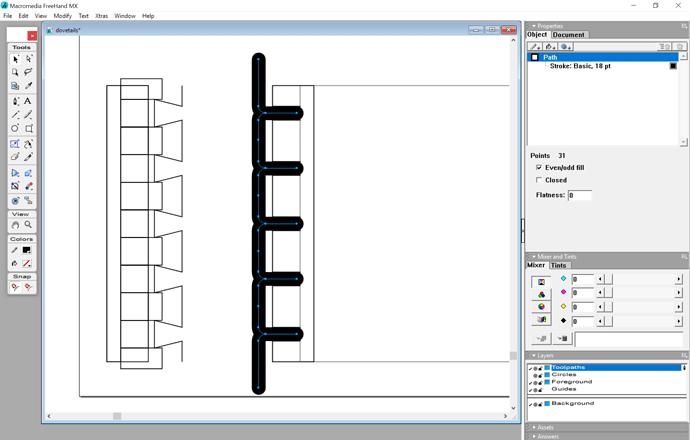 Adjust slightly to not have overlapping paths: 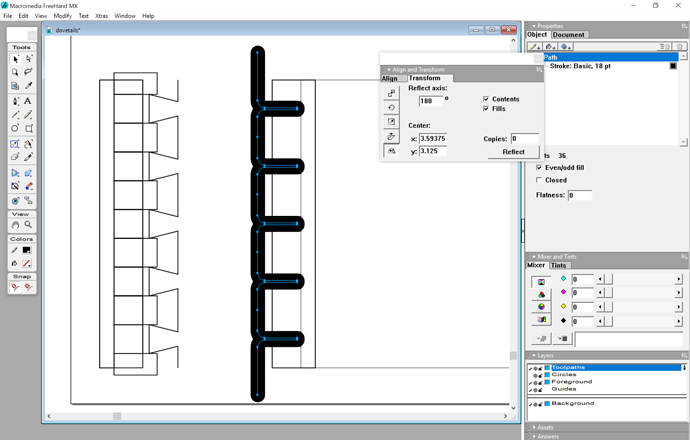 Arrange things so that you’ll be able to cut the pins on the horizontal board on the machine, and clamp the board for the tails to the front:

Import that into Carbide Create and adjust the size to scale and set things to a centered origin: 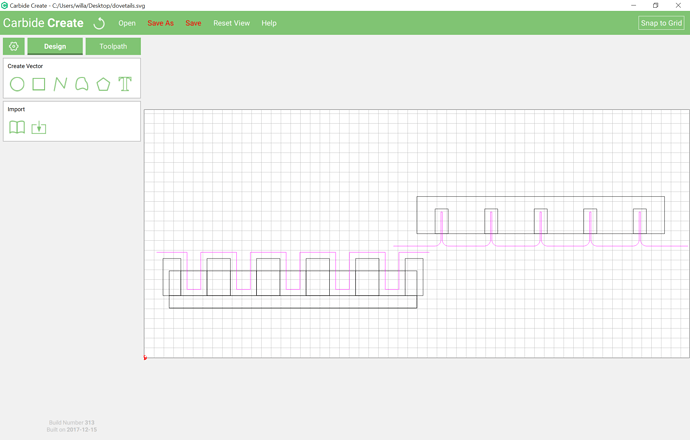 Set the origin to the center of the stock and align the corner of the board against it. Adjust the pockets and cut them to the desired depth using a suitable endmill, then set up a different tool for the dovetail bit and assign a toolpath which has a depth per pass sufficient to ensure that only one pass will be made.

EDIT: Sleeping on it, I believe the board which is held vertically needs to have its toolpaths adjusted — they need to be cut all the way through — it’ll also need to be shorter by twice the blind depth left in the other board.

Just for compleatness’ sake, there are a couple of commercial software programs which address this sort of thing. You may want to consider:

Hi William
I just ordered the software from tailmaker. it seems like it will do the trick. I will test it out this weekend and keep you posted. Thanks so much for all you EXCELLENT assistance. 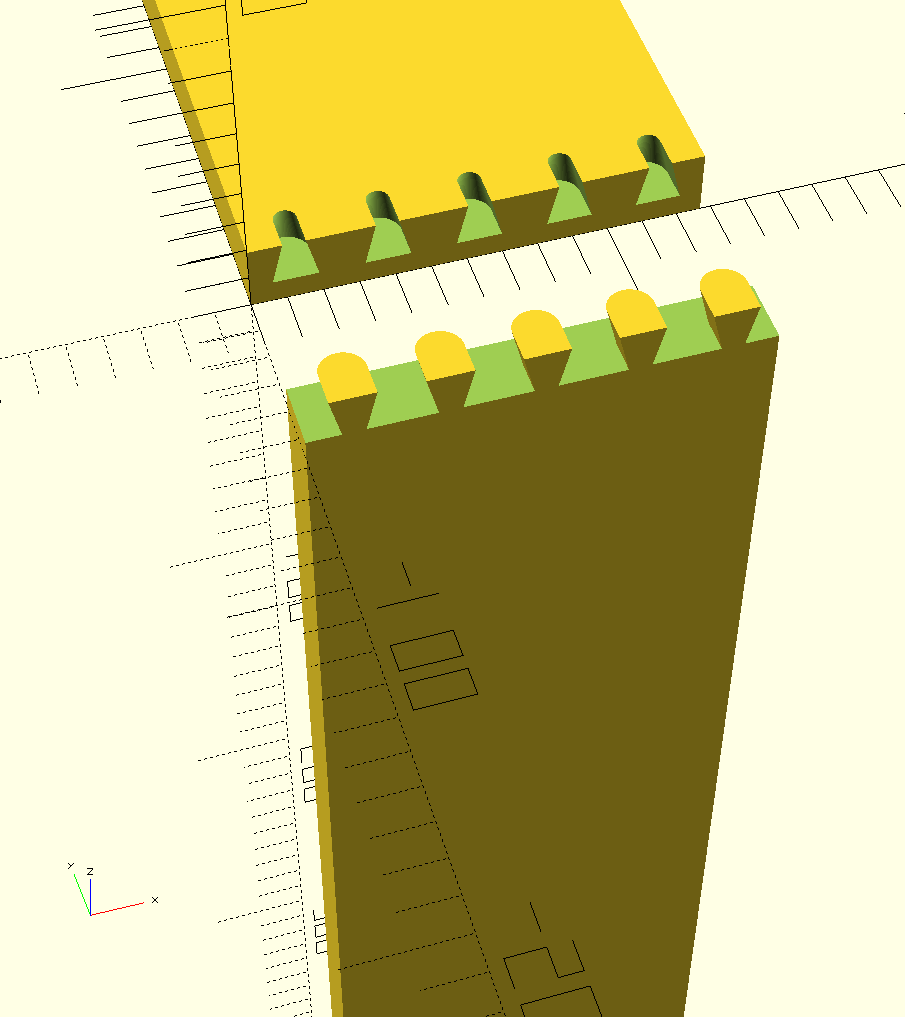 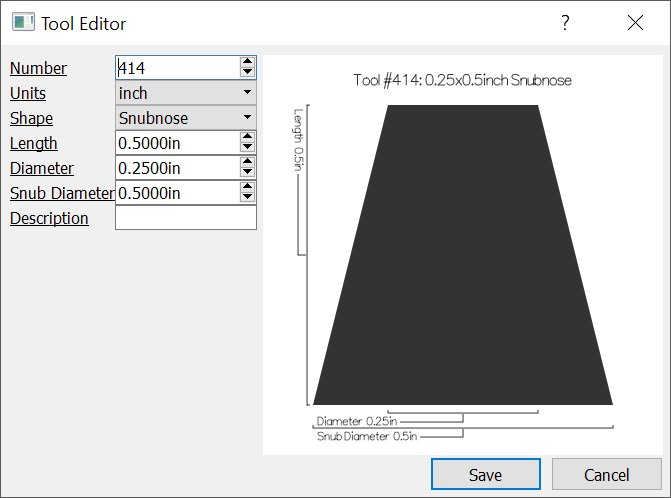 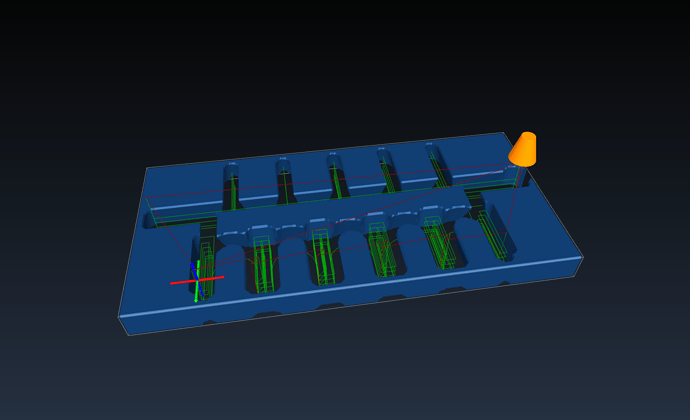