This post contains historical posts associated with the Speeds, Feeds, Power, and Force (SFPF) Calculator that were moved from other threads to help tidy them up.

One of the Shapeoko competitors has a web and mobile app for calculating F&S. It has dropdowns for material, number of flutes, a slider for rpm, etc. But it doesn’t differentiate between slotting, pocketing and adaptive, which would be a nice feature. It is tailored to the capabilities of their machines.

Something similar for the Carbide3D machines would be nice.

@gmack the comment about spindle torque assumes constant chip load, which has higher priority for me than feedrate when I set my S&F in Fusion. MRR and everything else falls out from there.

As shown in the attached file your most “aggressive” cut in that video was your “aggressive” contour cut. As shown below, that cut likely required less than 1.51 lbf and 40.2 Watts. Tripling the feed rate (and MRR) to maintain the 0.002 inch chip-load would require less than 4.53 lbf and 120.6 Watts. If that’s too much force for Shapeoko (is it?), you could reduce the force to less than 18/30 X 4.53 = 2.72 lbf by increasing the router speed to 30,000 RPM. You could then reduce it to 1.36 lbf by reducing the chip-load to the 0.001 inch you achieved in your adaptive cut. I’d be surprised if you couldn’t use the 0.00013 inch chip-load that you used with the Nomad cutting tool steel to reduce the force by another order of magnitude!
2019-09-09 Moy’s YouTube Aluminum and Steel Speeds and Feeds Workbook.zip (232.7 KB) 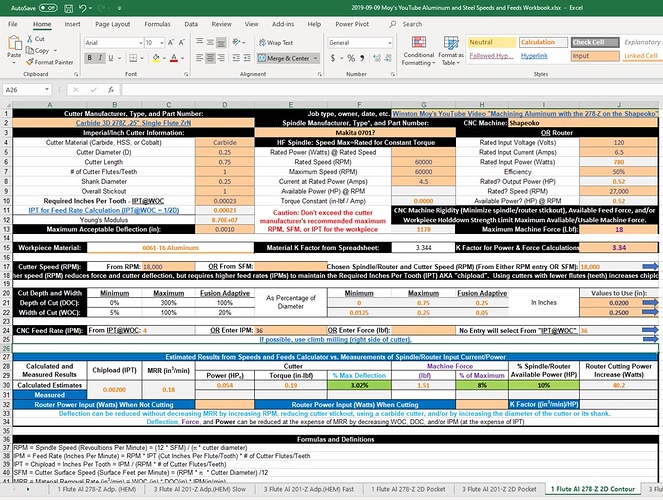 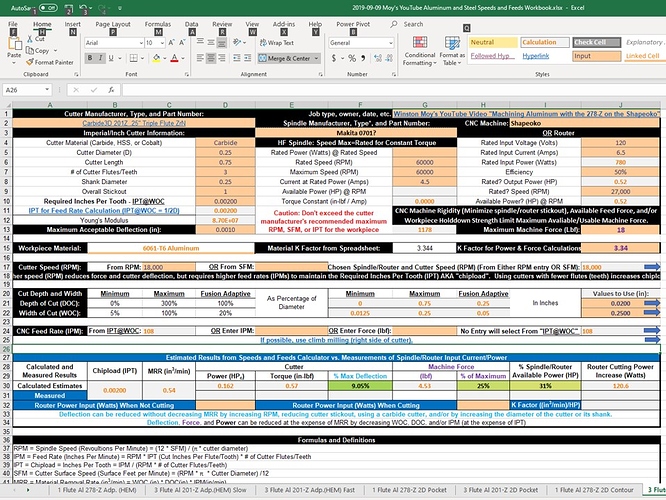 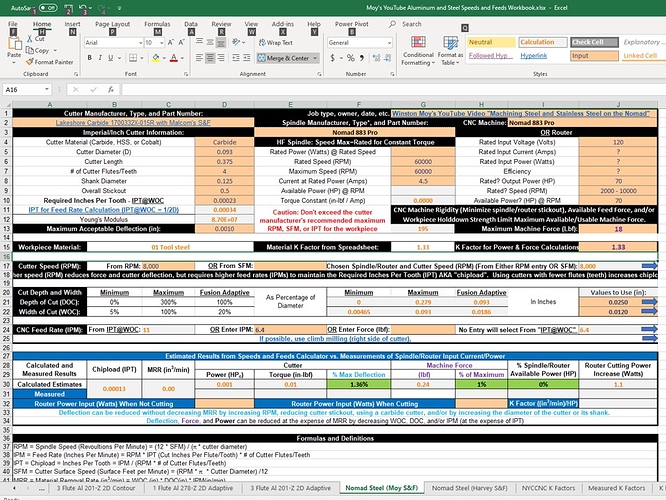 It’s also extra heat at that higher SFM. I’m not looking to set any land speed records with the material monday recipes. They’re supposed to be “safe” starting points for people, I’ve tried to make that clear by reminding people in the videos every couple episodes.

Furthermore, I would absolutely NOT want to use a 0.00013" chip load in aluminum. That worked in steel because the SFM was so low using small diameter tooling.

Also, that video did not take into account chip thinning. Have you seen the HEM video I put out? https://www.youtube.com/watch?v=wnv6Z72Ql24

It occurs to me that another variable we need to bake into the cake, is noise level.

30k-RPM in aluminum is going to be a noisy proposition. I’d often rather something run longer at lower SPL, for example when my wife is sleeping.

If anyone is designing an app or writing some javascript to provide feeds and speeds, it would be nice if one could reduce RPM to achiever lower SPL.

It’s also extra heat at that higher SFM. I’m not looking to set any land speed records with the material monday recipes. They’re supposed to be “safe” starting points for people, I’ve tried to make that clear by reminding people in the videos every couple episodes.

Furthermore, I would absolutely NOT want to use a 0.00013" chip load in aluminum. That worked in steel because the SFM was so low using small diameter tooling.

Also, that video did not take into account chip thinning. Have you seen the HEM video I put out? https://www.youtube.com/watch?v=wnv6Z72Ql24

The recipes certainly are plenty safe, but IMO you’re really only demonstrating/using a small fraction of even the “stock” machines’ capabilities!

At less than 1.05 lbf and 27.9 Watts, both of your HEM examples are plenty safe too. The 3 flute example did not require any extra force or power because the MRR remained the same as that for the 1 flute. Weren’t you using a (“1.25 HP”) Makita 0701 router? 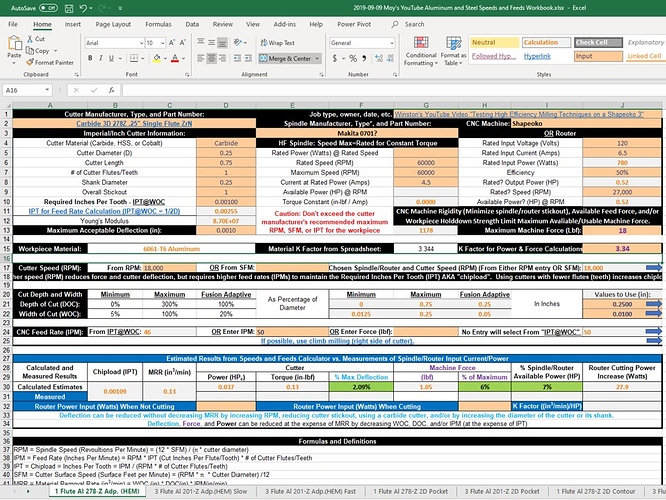 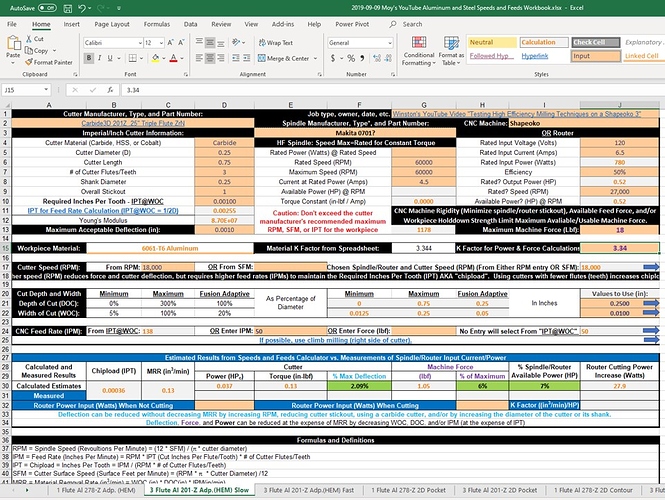 OOPs - my bad! all of the Aluminum calculations used a K-factor of 18, it should have been 3.34. “Hardest thing in the world is not screwing up!” I’ll edit those posts accordingly.

The 3-flute HEM example was actually run at 3x the feedrate to maintain chipload. It sounded pretty sketchy, and far more taxing on the spindle.

Miter saws are pretty different, the percentage of time the blade spends outside the cut means you get plenty of time for small chips to evacuate and for the blade teeth to cool down.

Do you have a Shapeoko? Because I think it would be far easier to put theories to the test instead of just hypothesizing.

I personally don’t plan to push much more aggressive in aluminum than what I showed in the HEM test, even with mist coolant. Even here I’m developing a subtle but visible low frequency vibration in the entire carriage during certain directions of cut. There are plenty of system dynamics “the numbers” don’t capture. Empirical testing is the only way to validate.

As a (not so?) retired, and likely somewhat(?) OCD engineer, I fully appreciate that “there are plenty of system dynamics “the numbers” don’t capture. Empirical testing is the only way to validate.” But, it’s the physics and math/numbers that dictate what needs to be validated/evaluated (at least it was before the era of Trump!).

Unfortunately I don’t currently don’t have my own CNC machine. So, I’m relying on folks like @Julien, @Vince.Fab, @will, you?, and others? to provide feedback based on their experiences. 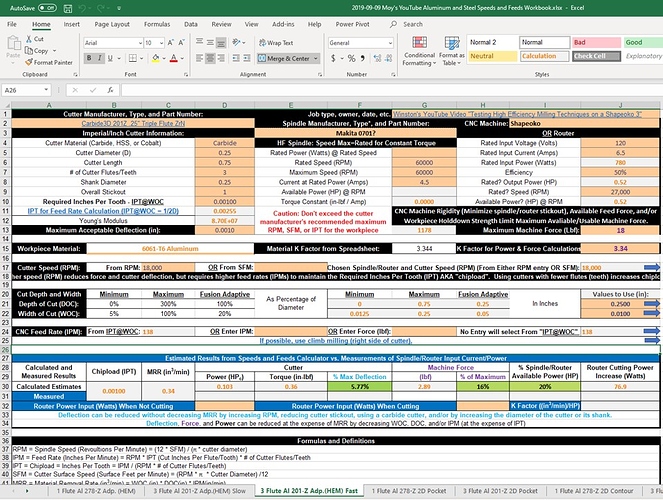 Winston is totally on the money about how cut direction on a stock shapeoko can be a major factor in speeds and feeds. In fact that’s one of the main reasons from the beginning I migrated towards much higher rpm and later ridgidity modifications. Its why my dropped vise is mounted the way it is. Sometimes you can outrun the vibration but that’s off topic.

If you have a shapeoko and you want to see where your weak links are just adaptive cut a heavy circle. I promise you’ll hear two distinct areas of “difference”.

I’m sure Winston pushed it as far as one should on a stock machine. I for one am very interested to see the changes to speeds and feeds using the new HDZ. Less wheels, less bad noises.

The workbook works well for me but maybe it needs input with bone stock machines to set realistic force limits. It tested fine to 60,000rpm at 400ipm and a conservative 0.5 cubes. Math looked good and it was easy enough to set it at a minimum chipload and fine tune off there based on force and power estimates

The workbook works well for me but maybe it needs input with bone stock machines to set realistic force limits.

The workbook supports that, we just need to determine what those force limits are! Need numbers and maybe a translator (0.5 cubes?)

2019-09-10 Update: Since Winston already provided numbers in the videos posted here, I added sheets to the workbook for his additional Shapeoko aluminum and wood videos as well as his Nomad cast acrylic video.
2019-09-10 Moy’s YouTube Aluminum, Steel, Wood, and Arylic Video Speeds and Feeds Workbook.zip (373.9 KB)
His most aggressive cuts were in the “Aluminum Machining Guide For the Shapeoko 3” 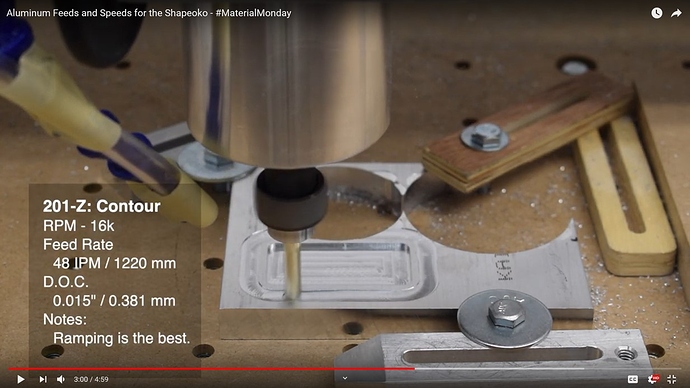 Video.jpg1232×694 128 KB
As shown below that likely required less than 1.7 lbf of cutting force and 40 Watts of cutting power and resulted in a MRR of 0.18 cu-in/minute. (That’s less than 1/10th the feed force and power capabilities of stock Shapeokos.) 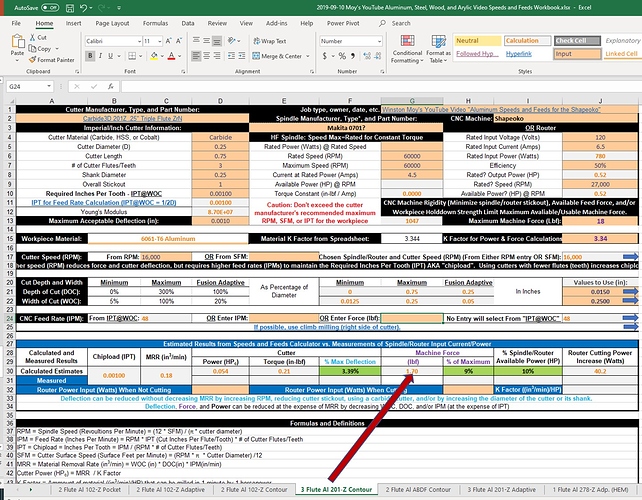 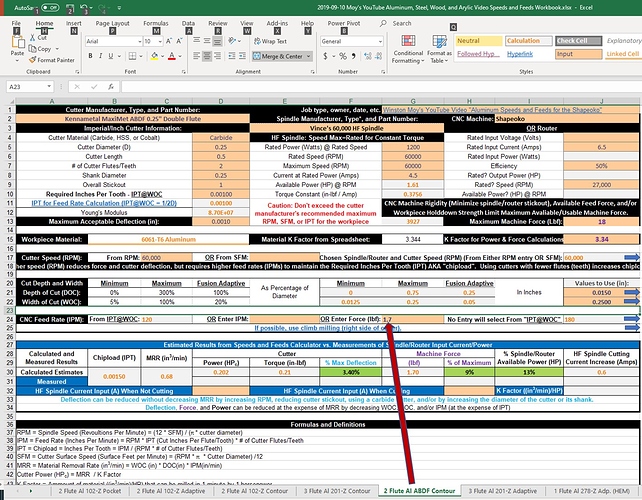 Since apparently no speed ratings are provided for the Carbide 3D endmills, they probably shouldn’t be used at 60,000 RPM (or even above Winston’s 18,000 RPM maximums?) So these endmills were used for those calculations instead. 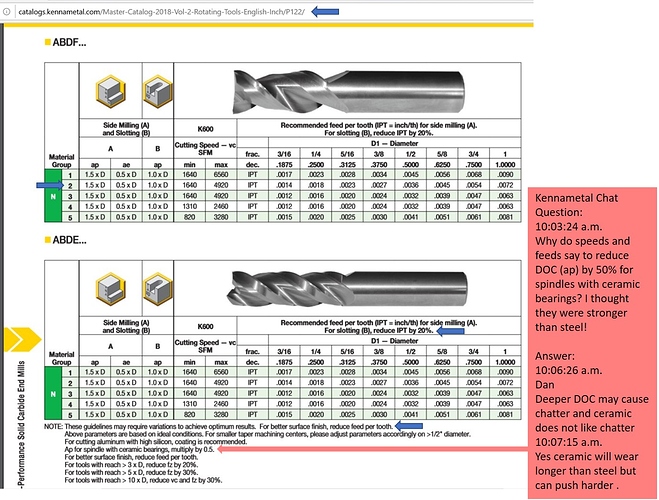 Interesting that Winston’s reply to one of the comments on the “Speeds and Feeds for Wood on the Shapeoko” video supports my assertion that, at least with wood, “make dust not chips”.
" Winston Moy 2 months ago
Chipload isn’t really a big deal, so I wouldn’t worry too much about it. The reason it matters in other materials is heat. And here if you rub more than cut, you’ll just see a little burnishing/blackening of the cut edges. That you can recover from because wood is forgiving, in aluminum you’d break a tool. If it works, just go with it. Woodworkers have been pushing router bits through wood by hand for decades, and i guarantee you they haven’t measured their feedrates!"

Woodworkers have been pushing router bits through wood by hand for decades, and i guarantee you they haven’t measured their feedrates!"

Yes but I have seen many router bits that burned wood.

Cubes, you know, cubic inches per minute. Also I used a lakeshorecarbide 0.125 that is rated to 2000sfm. As far as the carbide 3d single flutes, they aren’t perfectly balanced and I didn’t like running them much past 26,000.

I dont understand you you wouldn’t want to consider chipload on every cut. Do it at least for the tool life.

Thanks!,
The 5.5 lbf predicted cutting force would cause about 0.025" of machine deflection (measured at the tip of the endmill) each time an endmill flute entered the workpiece in our stock Shapeoko. It would be interesting to see if that is workable. Note that the 654 SFM (200 m/m) Vince used slightly exceeded the manufacturer’s recommended 550 SFM and was well below the “HSM” cutting speed threshold. 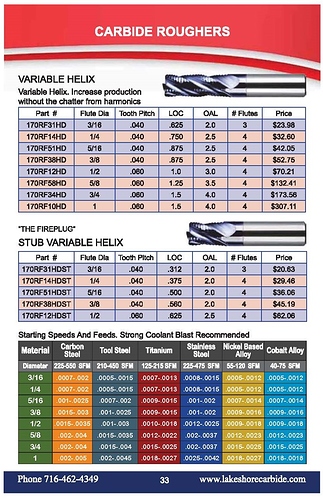 I was trying to define a length of a ramp, not the type which is another good question. I think the ramp should be proportional to the size of the endmill diameter. A little guidance could be good since we recommend ramping.

It looks like he could have achieved about 3 times the MMR with a Kennametal endmill.

Well at least on paper. While I don’t know much of either endmill, when choosing an endmill, the durability, the price and quality of the cut should also be factored-in. Maybe @Vince.Fab has tried both and can comment or maybe you found a pearl.

Anyone got a link that that calculatormajig? I tried to open one yesturday but it didn’t work. Probably pushed the wrong buttons.

Anyone got a link that that calculatormajig? I tried to open one yesturday but it didn’t work. Probably pushed the wrong buttons.

2019-08-10 Vince Speeds and Feeds Workbook.zip (162.8 KB)
It’s a Microsoft Excel workbook, which can’t be uploaded. So I sent it to a compressed (zip) file for uploading. But you need Excel to use it.

If anyone has a free way to use excel files please tell me. I would love to see all that data 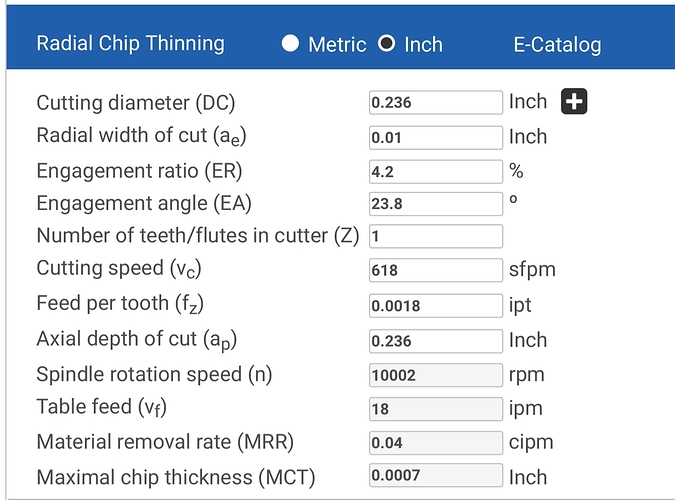