Can someone please recommend some videos on a tutorial of creating a step by step 3d carving…from start to finish? Good detailed ones please… not ridiculously short or vague or missing steps. Files would be a help too so I can follow from start to finish.
Preferred on Carbide Pro.
thanks for any help.

Can’t really help w/ videos. There are two at: 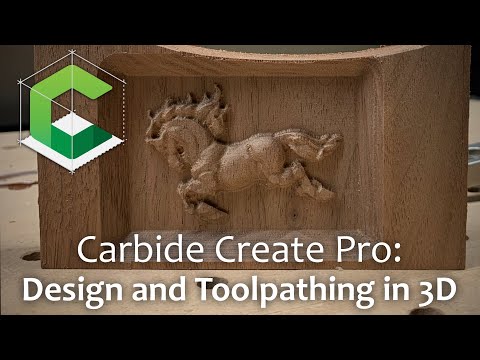 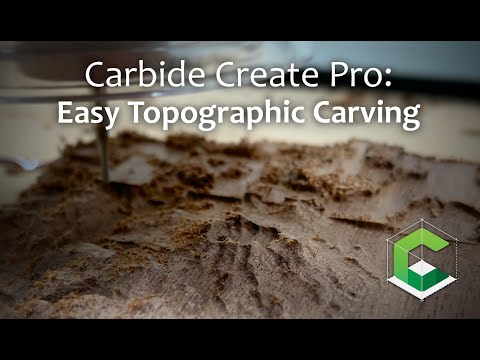 but not sure if they meet your requirements.

There is an overview at:

Overview at: Modeling Instructions - #6 by GJM

and we’ve worked up some step-by-step tutorials on various things:

Starting with 2.5 d carving How To

Hi all. I would like try to make something like this tray. Is this possible to do on Carbide Create? I have a file for it, but it is for vectric software and I won’t be shelling out for that anytime soon. Or if anyone has a link to a simple 2.5 d file that I can mess around with that would be awesome. I have fusion 360 but am only just starting to figure that one out. Thanks! [44%20PM]

Needing a little help with what Carbide Create can do and what it can’t do. Seems any videos I find and even in this site are all done with Vcarve software or fusion360. Can Carbide Create carve from an image like “Mikes” lighthouse? or a horse. Also I am using a Mac. Thanks for any insight

Does anyone know of it is possible to create wide flutes similar to what are in the photograph with vcarve pro? [image]

A replacement for a lost board game part — first draw up the part, measure it, select an appropriate piece of stock and set up Carbide Create to match: [image]

I either need some guidance, or I am requesting a new 3D modeling feature for Carbide Create. Built into Carbide Create is the ability to model Flat, Round, and Angle. In the screen shot below the top object is the classic “Angle” which produces a pyramid shape. What I want is (what I am calling) a “Ramp” shape, like the 2nd and 3rd objects below. Ramps angled horizontally or vertically. A “Ramp” is almost the same thing as an “Angle” object, but the height just varies on two sides instead …

Designing a bowl: [image] which is: First, set the stock size: [image]

What are you trying to do that you are having difficulty w/? If you’ll let us know, we can do a custom tutorial for it.

in my humble opinion, Carbide Create Pro “severely” lacks in 3D carving. While the video examples they are using are simple assuming you are cutting a full square or ‘regular’ shaped object, lets say your job is irregular?

Carbide Create Pro 3D needs the ability to select the image and do a relief boundary around the image. Otherwise you are wasting cutting time. Maybe there is a way and I just have not figured it out yet.

First two images are with Carbide Create. Last three are with Carveco. The cut time is almost in half because of the ability to create an offset relief boundary vector around image and cut jus to that.

Maybe there is a way and I just don’t know how to do it. 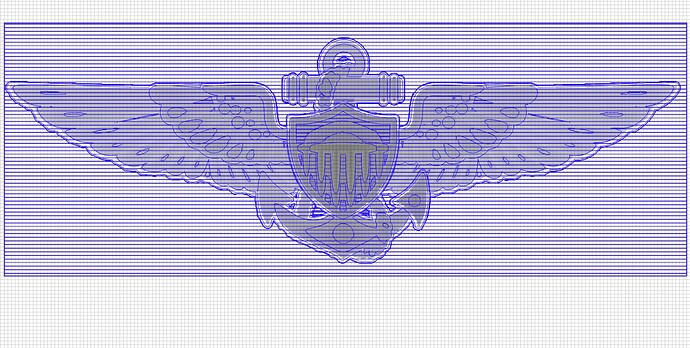 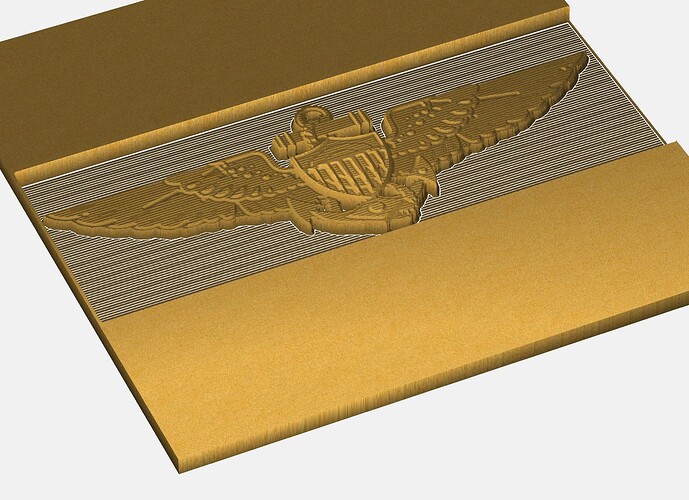 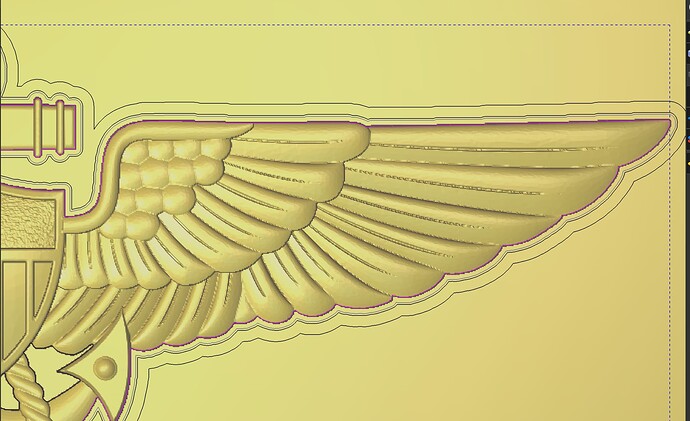 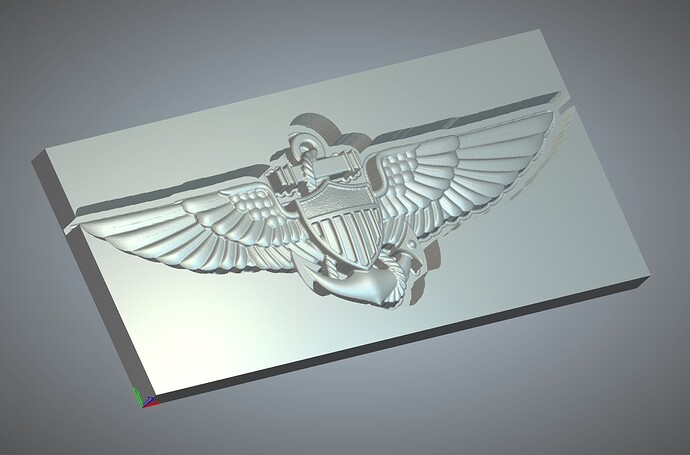 If you select a vector with the 3D toolpaths, they will act as a boundary for the toolpath.

That is the issue (or more of limitation) with 3d modeling in Carbide create. The greyscale image is non selectable and you can’t create a vector or select a vector off of the grey scale image. You have to create the vector as a rectangle in design view. As can see in photo, there is a lot of wasted cutting. If there was a way to select the actual image in design view or modeling view, and create an offset of the image by .25, then we wouldn’t be cutting out all that negative waste in the corners. And the offset will still allow enough room for toolpath to clear.

I had to hand draw a makeshift offset vector around the wings, and look at the difference in milling time. It would just would be easier if the greyscale model was selectable to make an offset quicker. I’m not smart and still learning carbide create software and using greyscale vs .stl models. 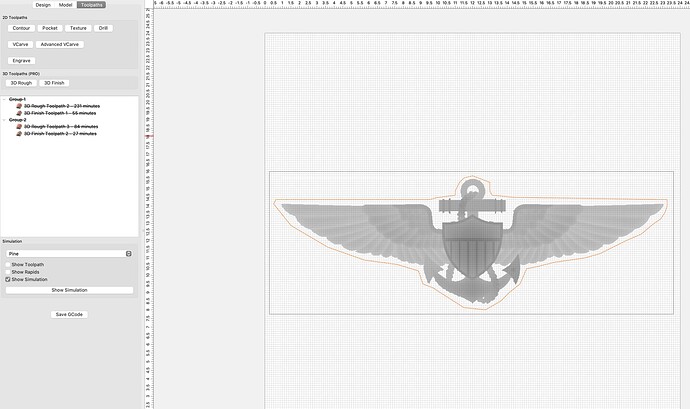 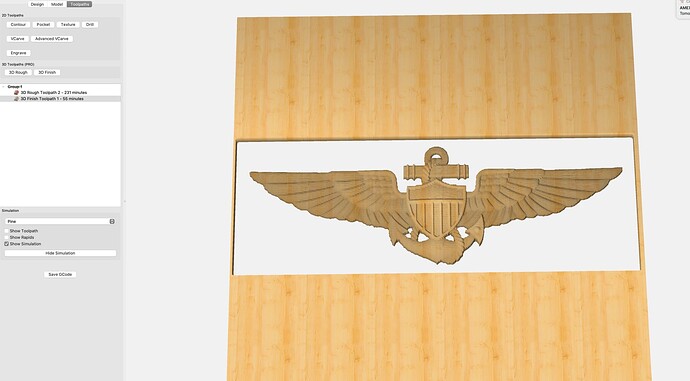 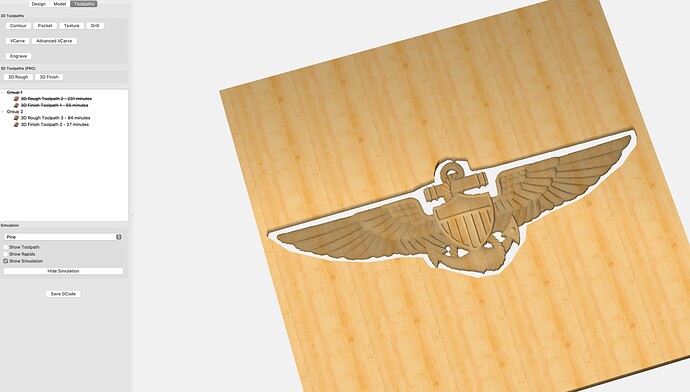 We’ll see if we can make that easier in V7

That be awesome. Greyscale vs stl modeling is new to me and I’m sure it’s not an easy programming change for you all.

I was in your spot a few weeks ago. The hardest part for me, was getting a greyscale heigh image. I previously used a different software package and worked exclusively with stl model images.

Carbide is greyscale and all my models are stl. So, as a Mac user, I either use Gimp to create image and convert to greyscale, or blender. Both are free. Other way is to use website that converts stl to greyscale. STL2PNG - javascript edition

Once you have the greyscale image it is actually a very easy workflow process after that. The two videos that William posted are actually very good.

Biggest thing to remember is nothing works unless you get that vector in design view.

Jim, I didn’t have a good greyscale so I just captured your image above & cleaned it up a bit.

I imported the image in 3D (Model). Then I used Trace Image with a high threshold to get the outline & then offset it. It was pretty quick.
A little tricky to scale the trace to match the model. But the nice thing is it gives you the overall height & width, so you can measure the model, and then just enter the same dimension when scaling the vector.