Does anyone know of it is possible to create wide flutes similar to what are in the photograph with vcarve pro? 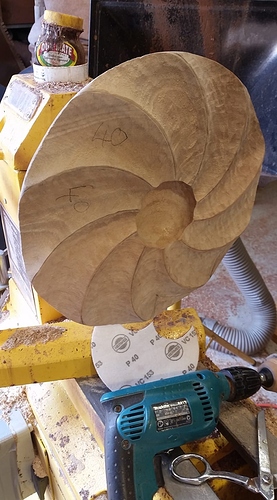 While you can carve a 3d pattern in Vcarve; you can’t create it in that tool. You’ll need to import the 3d file into Vcarve to be able to carve it.

You can create or buy 3d files in a variety of formats that Vcarve will support. To create you own you need a separate tool to do that. I use a free tool called Blender to create STL files that I import.

Aspire is the ultimate upgrade to Vcarve and will allow you to create 3D items and files. But it’s expensive

Thanks for the reply. I Have struggled learning Fusion 360 but may have to give it another try.

I Have struggled learning Fusion 360 but may have to give it another try.

If you do, you may be interested in this video series

I wonder if you could use molding toolpaths to achieve the desired effect. The way I see it, you would create a dome then create curved vectors that segment your dome then create a molding profile that you would apply to those vectors. It would carve out the segments.

It should be workable to do this in Carbide Create if one enables the Pro features.

One starts by drawing two suitable circles, and then a line to use to register against when drawing: 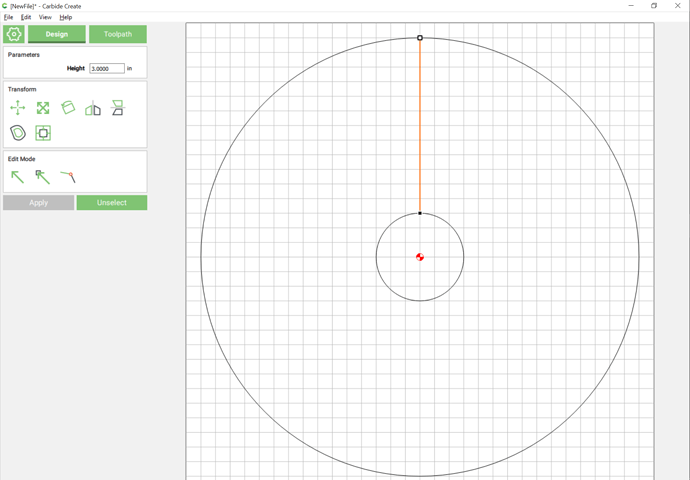 I count 10 flutes, so we duplicate the line twice, drag the duplicates into registration, select it and the outer line and rotate by 360 degrees divided by 10, so 36 degrees: 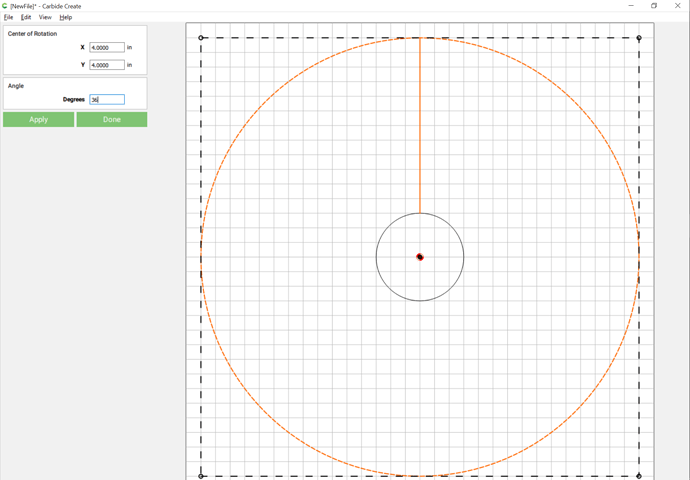 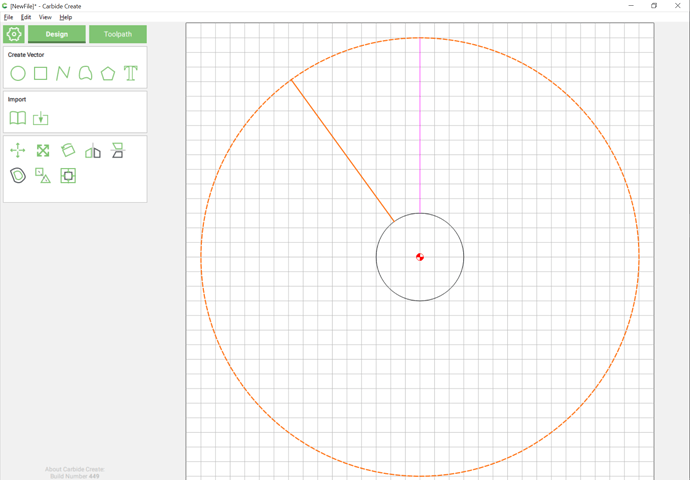 and we then repeat this to arrive at: 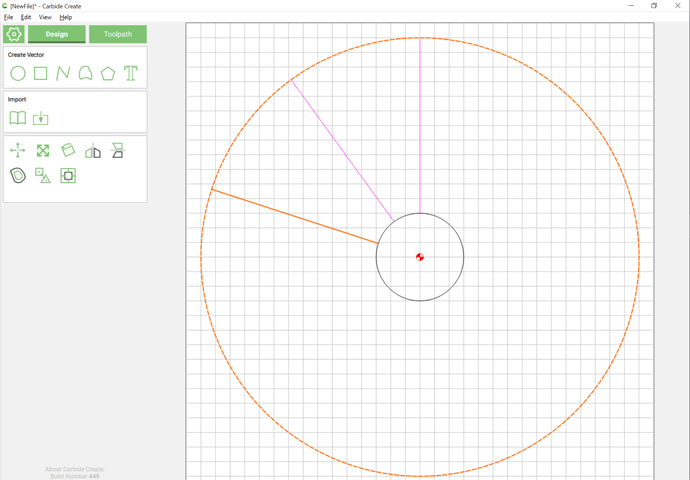 We now use the rotated lines to draw in a curve which defines the desired curve and is closed: 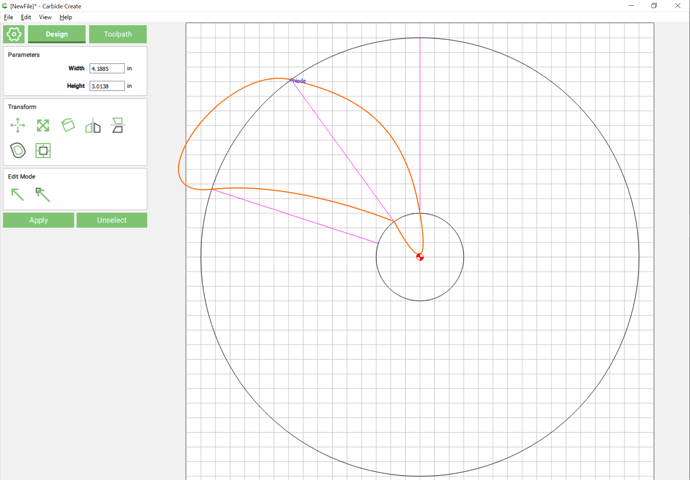 Go into node edit mode and adjust the curves as desired: 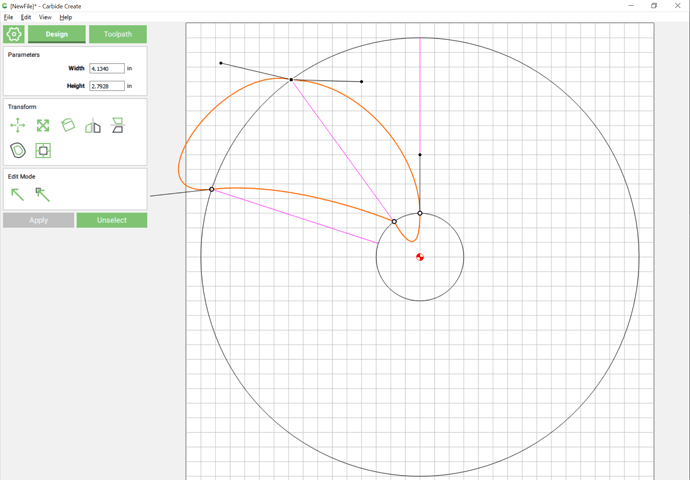 Ones initial inclination is to then duplicate or redraw the circles and use Boolean operations to trim the curve as shown below, but that won’t work: 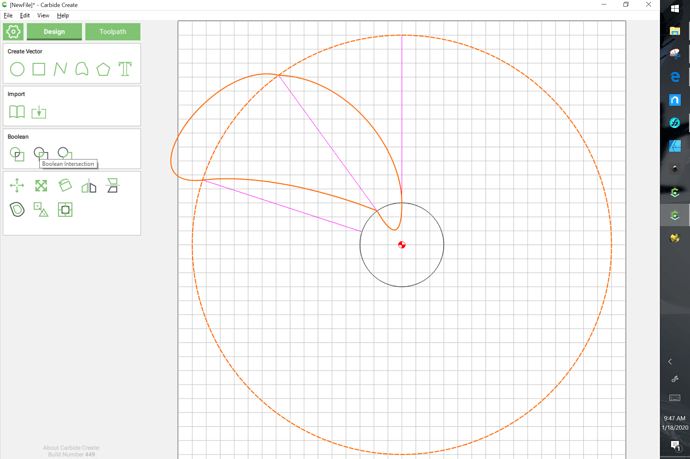 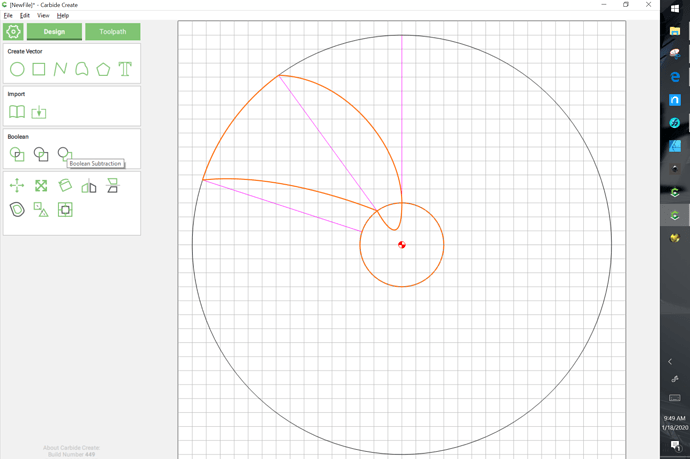 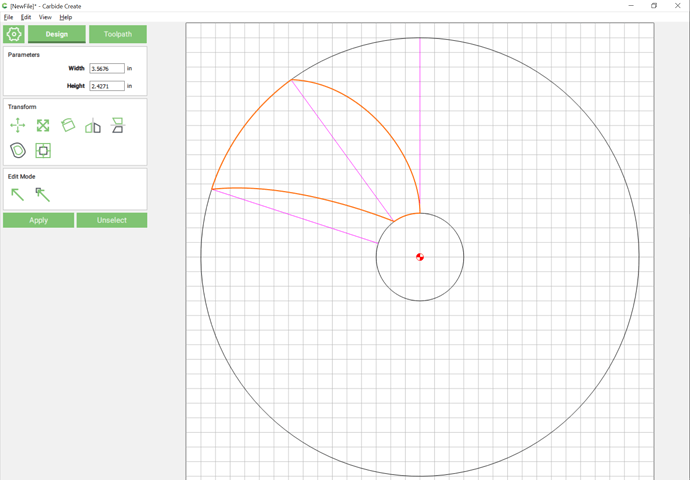 Delete the lines and then duplicate the curve and drag it back into registration and rotate it and the outer circle: 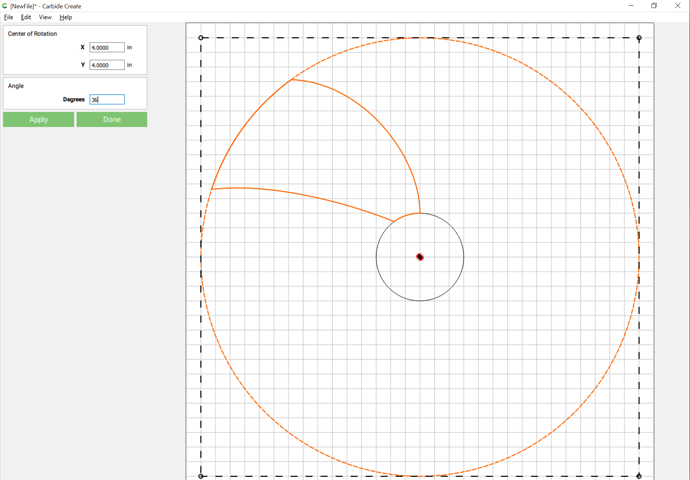 Hang on for the actual geometry needed.

Backing up a bit to: 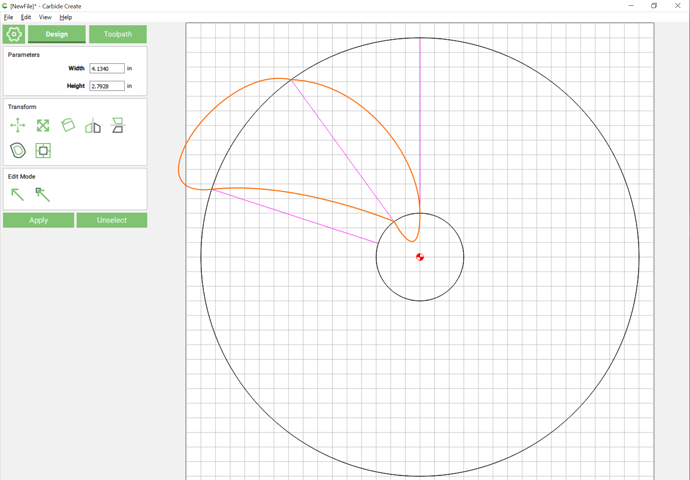 We adjust the curves to allow for making a shape which will overhang the area of the project: 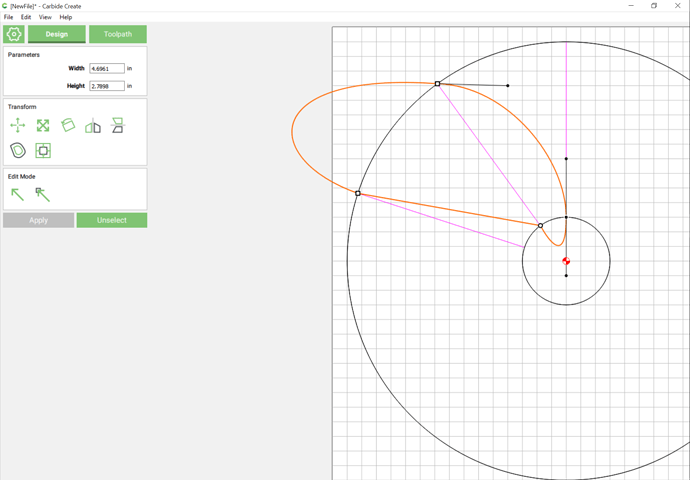 (note that for simplicity we have straightened the trailing edge, to ensure that the leading edge of the curve will overlap it)

Delete the extraneous lines, dupe the inner circle, and subtract it from the outer as before: 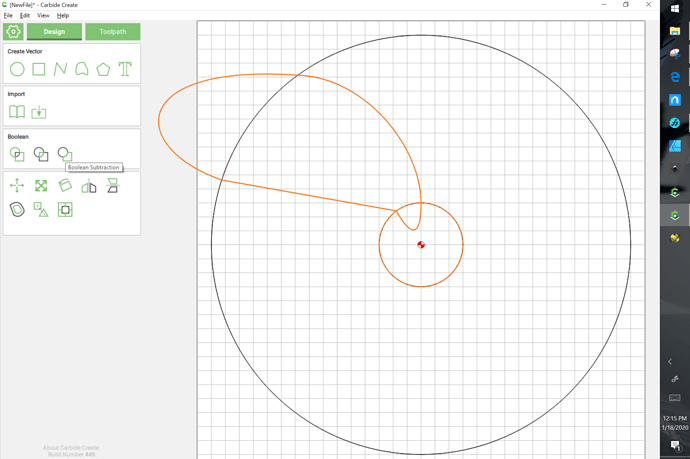 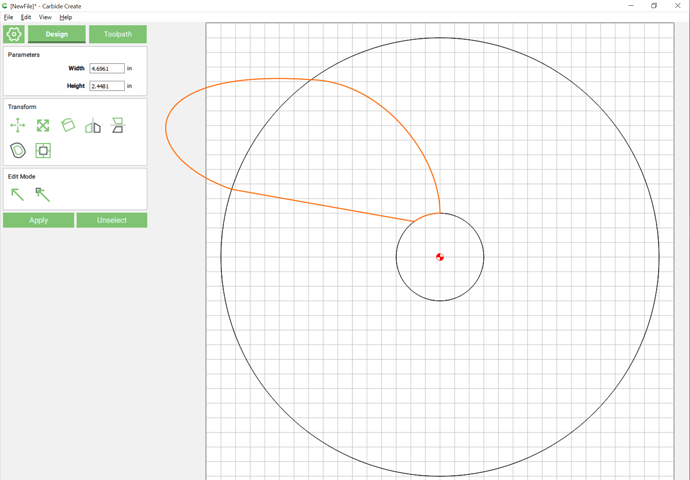 Next, we want to rotate an aligned duplicate of the curve around the center of the circle. While this could be done by pluggin in the center of rotation, I find it expedient to just draw in a sufficiently large circle: 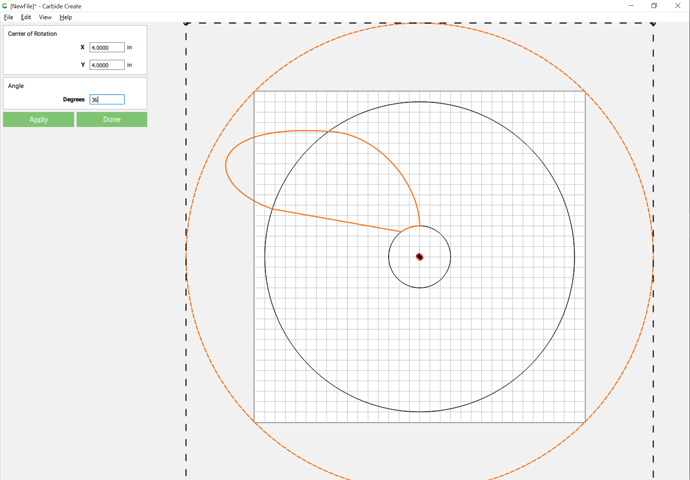 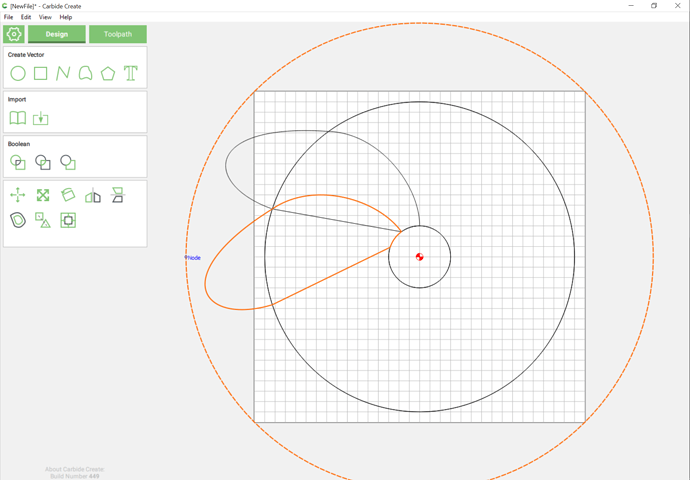 (note that it may be simpler to group a circle with the curve and align against the circle — the snapping is easier, since the curve is no longer a curve after the Boolean operation, but a polyline with many points, any one of which will snap)

Then we subtract the duplicate from the original: 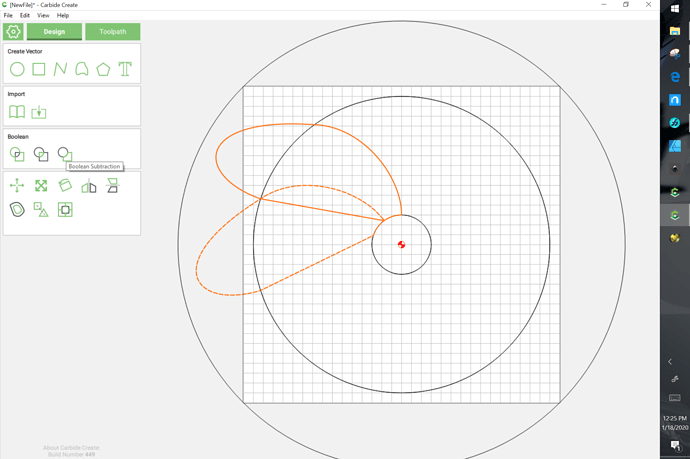 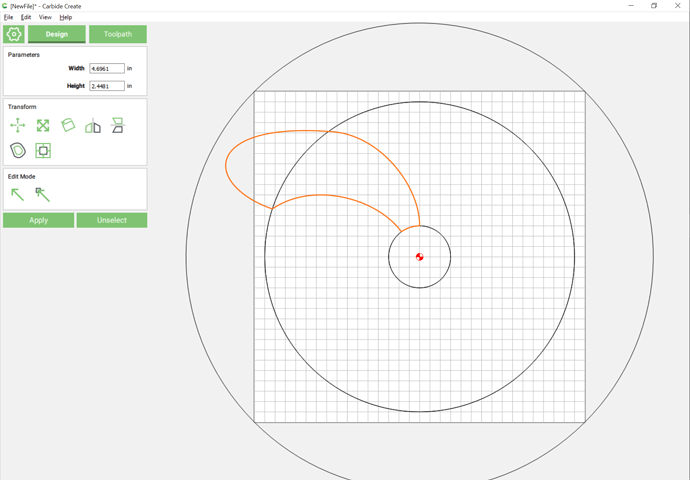 Note that this has created a sharp point which will probably interfere with the 3D modeling — we could either re-draw things, or just draw in a suitable curve: 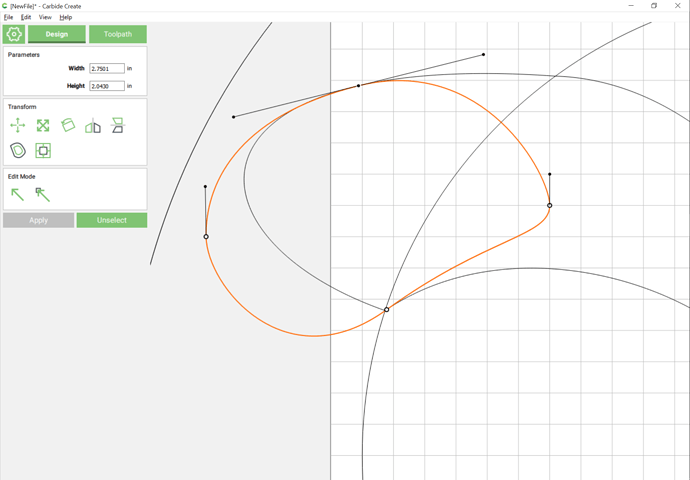 an Boolean union it: 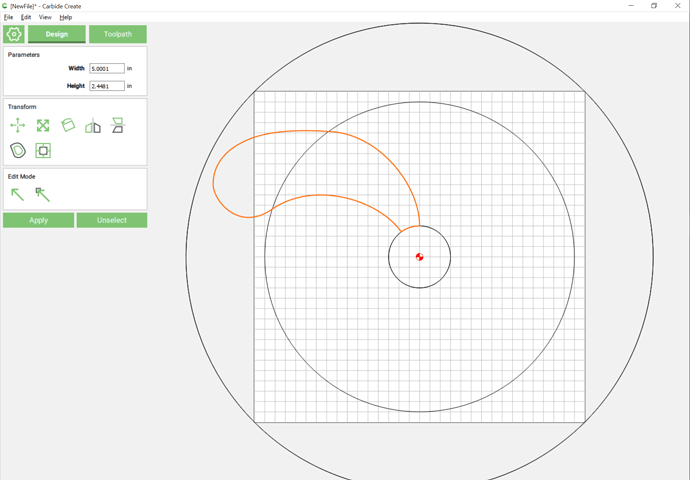 With the geometry drawn, it’s simply a matter of duplicating and aligning the curve and outer circle 9 times and dragging them into registration (easiest if one groups them), and rotating everything (shift clicking on the curve to deselect it and then deleting the superfluous outer circle will speed up and simplify the selection process) to arrive at: 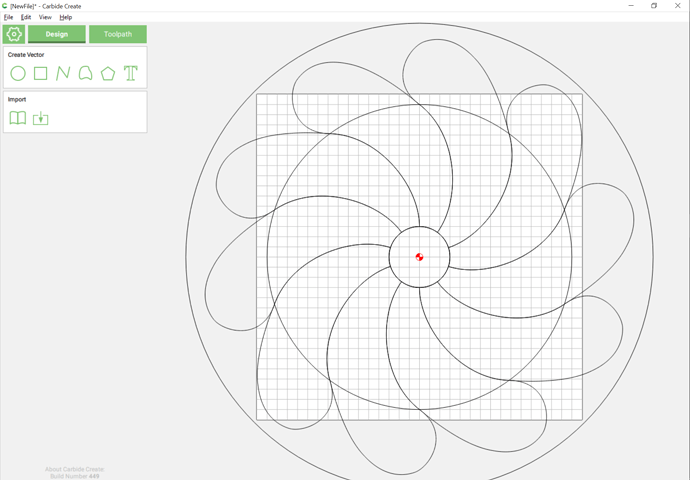 Thank you for the awesome explanation! How then in CC do you vary the depth from the inside to outside?

Next up is the 3D modeling — ensure that your stock thickness is set suitably and the Pro mode is enabled: 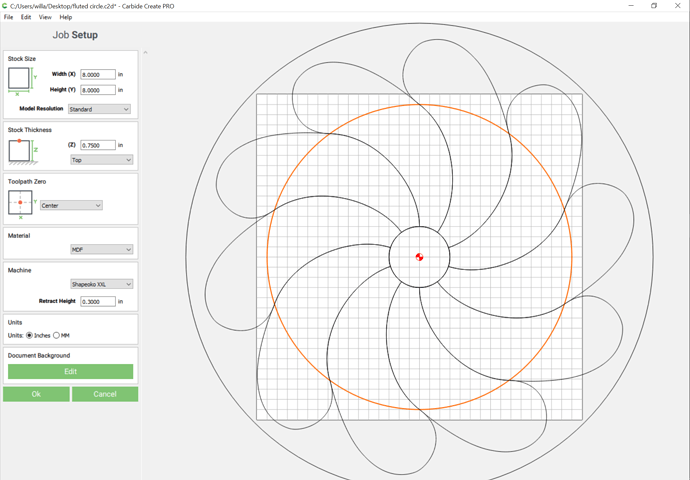 Begin in the Model tab by selecting the circle and adding it at the thickness of your stock: 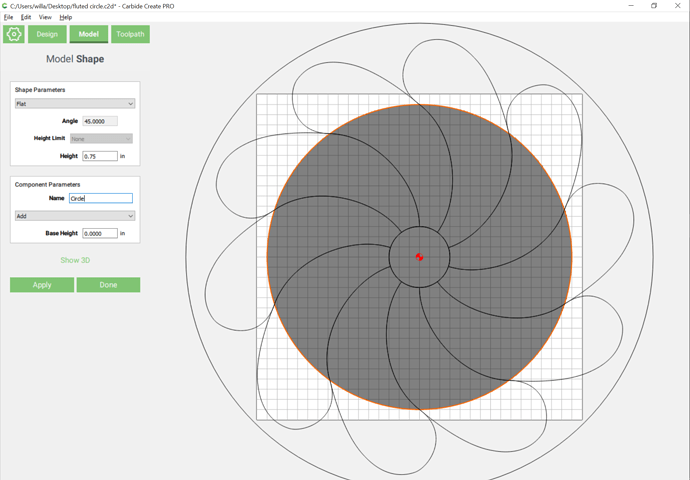 Select the inner circle (easiest way is a drag-select, then shift click on the outer curves to remove them from the selection) and remove it as a rounded element from the circle: 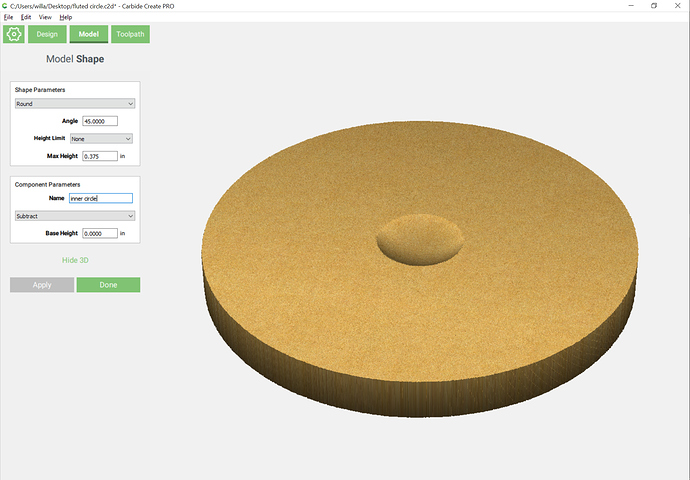 Repeat with the geometry for the flutes — note that it will be necessary to select and subtract them individually, so repeat 10 times: 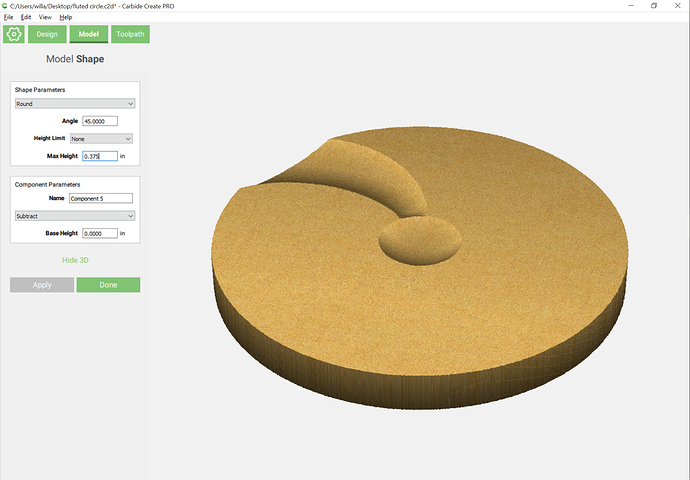 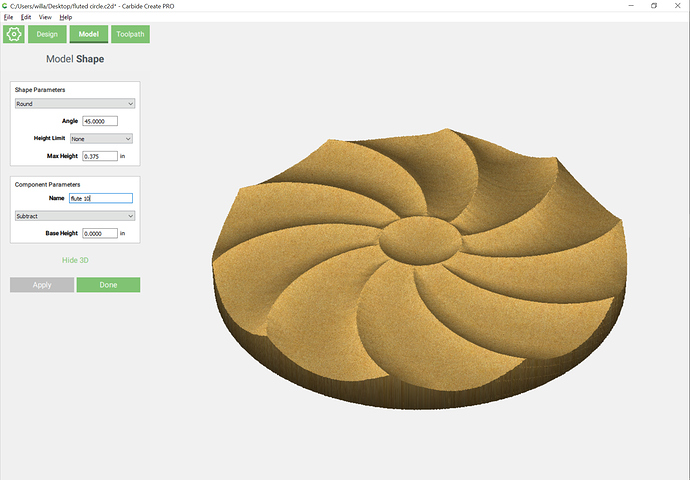