I’ve been trying to create a wavy 3d flag in Carbide Create Pro… VERY unsuccessfully. One example of a flag with a raised kneeling soldier and stripes but that is not really helping me with this issue.
Here is what the svg looks like. I’m trying to get the svg to look close to the picture. 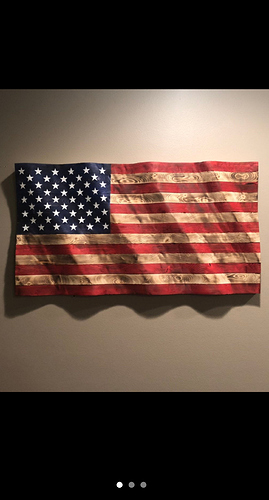 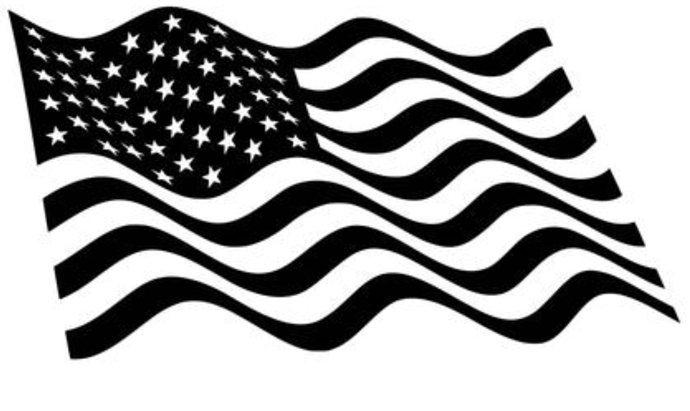 I’m new to Carbide Create Pro, but I decided to give it try to see if I might be able to create something like what you want. 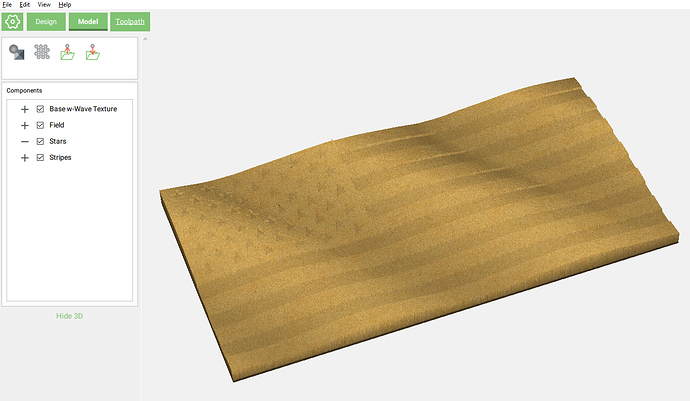 I started with a grayscale wave pattern (I didn’t spend much time on this, but it didn’t come out too badly): 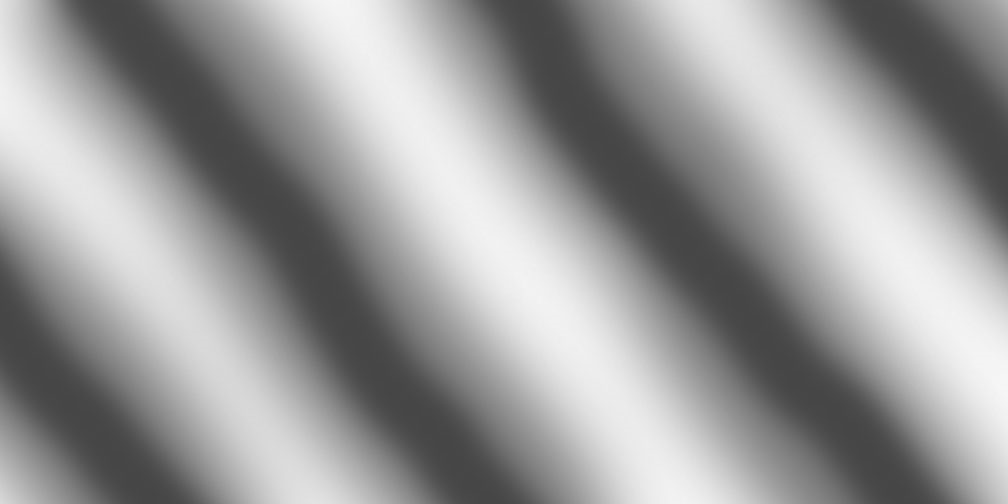 I imported an SVG of the US flag, then I created a base component selecting the grayscale image as a texture. For the stripes, field and stars I Added and Subtracted components as necessary to create the model.

Here’s the file for reference:

I’m trying to use your example and reproduce it a little bigger … CAN YOU PLEASE link me to the right grayscale pattern.
Second a little bit more description of what you did for us new to CAD/CAM everything folks.
Lastly thank you for helping me with this. I may never make a flag but I will use the ideas.

The only thing I can’t figure out is how do you draw the greyscale image. What program did you use?

I used Photoshop to make the grayscale image, although I did it very quickly and it’s not very good. If you have Windows 10, you can use Paint3D to make one.

In Paint3D, use the Spraycan brush and move the slider to a pretty big Thickness. Select the light gray color and draw some wide stripes: 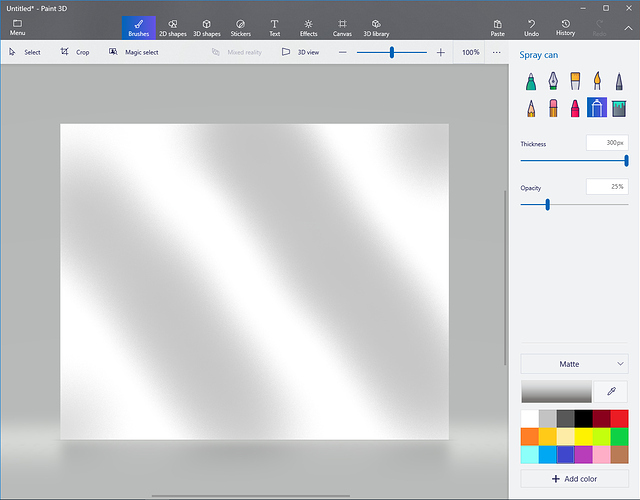 image.jpg1284×1002 172 KB
Pick the darker gray color and reduce the thickness and draw in the middle of each gray stripe. You want to make a gradient from white to dark gray or black. Adjust the Opacity slider if necessary to make the gradient smoother: 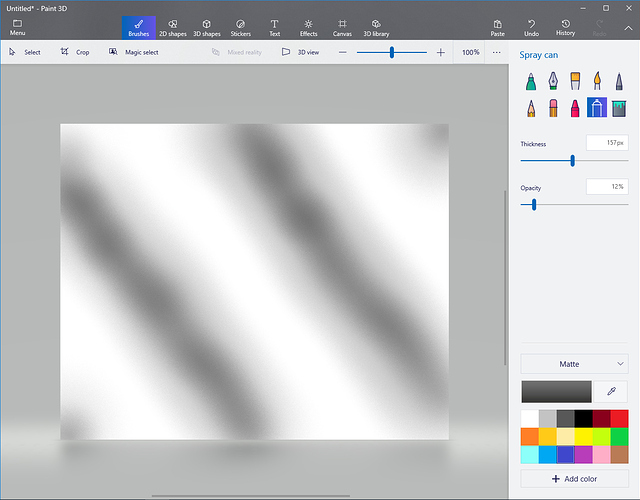 @CCCnc: You should be able to use the grayscale pattern I attached in this thread if you click download. You should also be able to edit the .c2d file I attached and make it any size you want. Once you have resized your job, select and scale up the vector image of the flag. Disable or delete the existing Base component, since you want to resize it. Select the vector that defines the border of the job (the rectangle defining the shape of the flag) and click the Texture button in the Model tab. Select the texture image you downloaded or created and adjust the Texture Parameters until you get what you want. You can click Apply and Show 3D after each adjustment to see what it will look like. I used an angle of 0° and adjusted the XY Scale of the texture until it filled the flag shape. Base Height is the starting thickness and Texture Height is how high the waves will be. Adjust those to your liking. 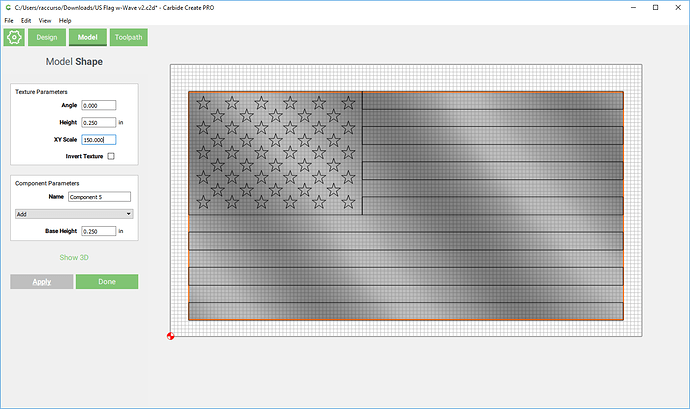 3D view of the texture: 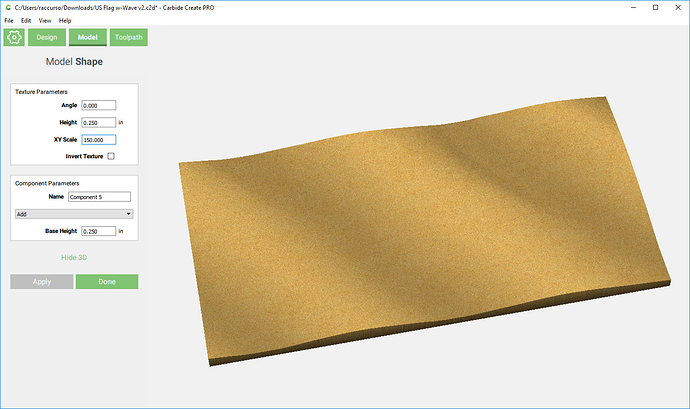 I hope that helps. Once you figure out the texture feature, adding other shapes can be figured out. You are basically adding or subtracting shapes one on top of another to create the overall shape.

I think I’ve got the idea of how to do it but getting the grayscale download or created is what I’m having trouble with.

Ok… I don’t know what I’m doing wrong.
I went to paint 3d drew the same kind of grayscale pattern… Saved it a png. … Then I open it as a texture and it looks like this. 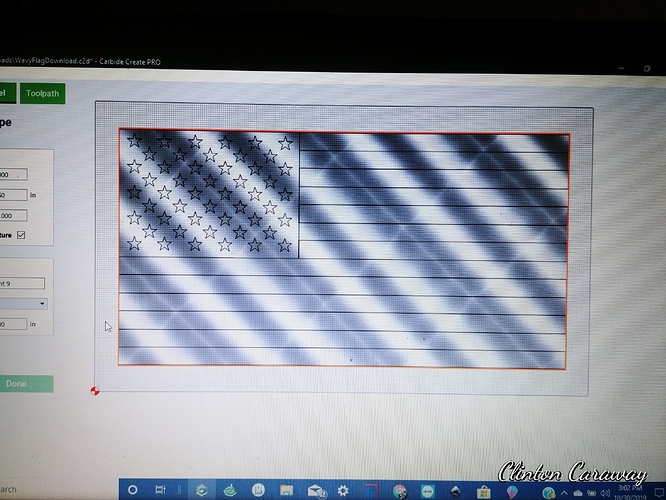 @CCCnc: Look at the image I attached of the texture parameters. When you first select the texture file you will see that list of parameters. It looks like your texture file is smaller than the flag and so it is tiling a number of times to fill in the whole flag. It also looks like it’s rotated, so you will want to change the angle to 0° and try an XY Scale of something like 400% and click Apply (not Done) to see how it looks. Adjust the XY Scale, Height and Base Height until the texture looks the way you want in the Show 3D view and then click Done.

Start with a vector version of the flag — one is available here:

Begin by drawing in a surrounding rectangle which is adequately larger to allow one to have some working room: 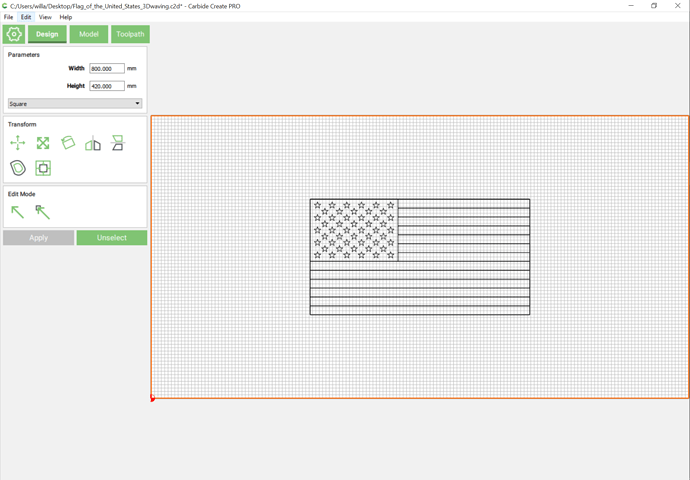 Draw in shapes using the polyline or curve tool which will define the midpoints of each ripple in the cloth: 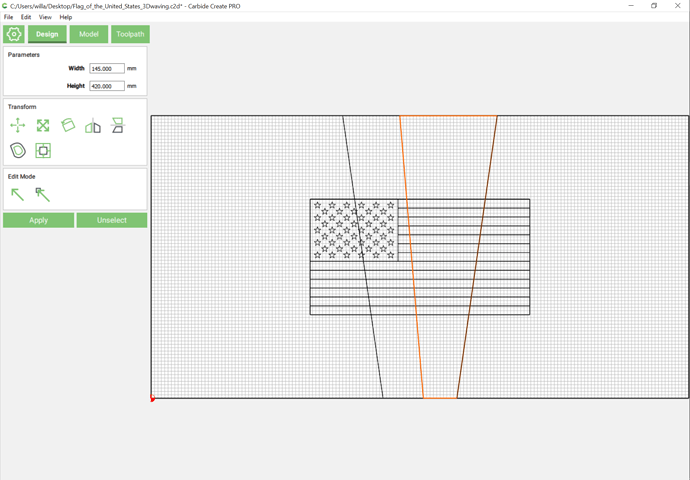 Assuming one has the stock thickness set to 2" (50.8mm), begin the 3D modeling by adding the rectangle at half that thickness (25.4mm) as an initial median: 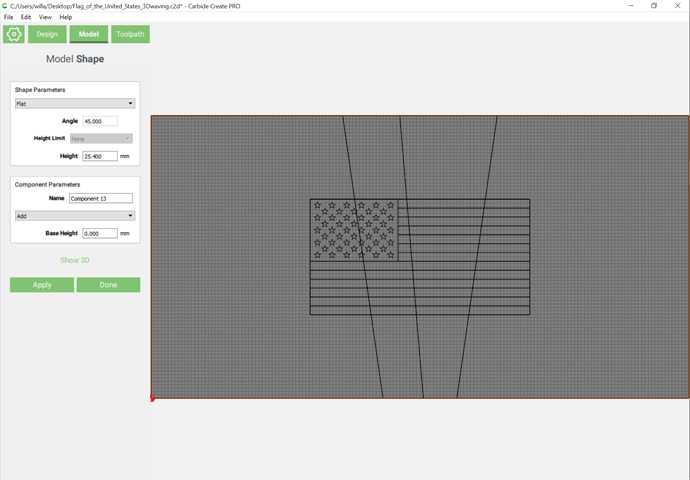 Select each polygon and apply a suitable 3D modeling to it: 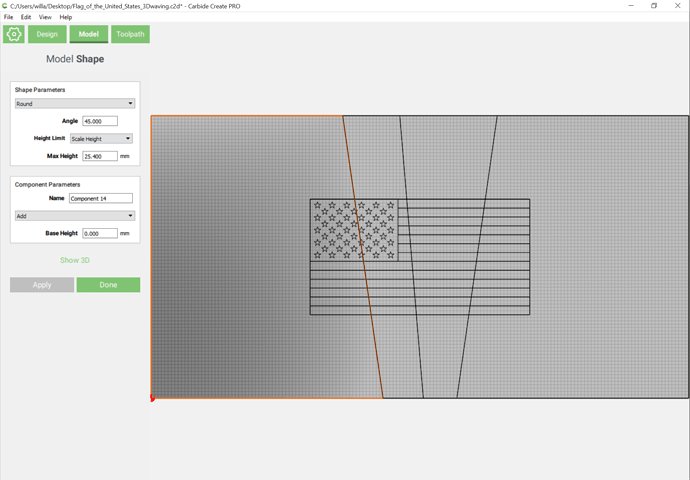 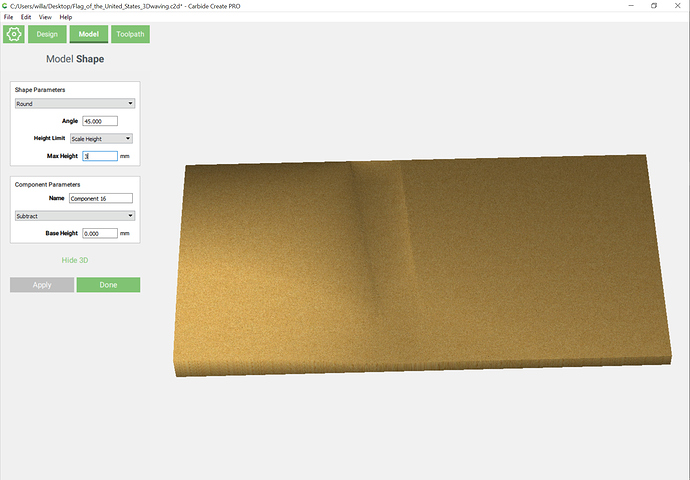 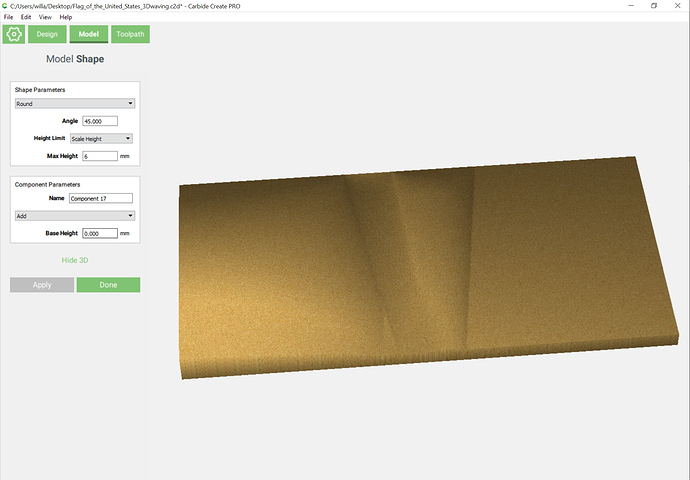 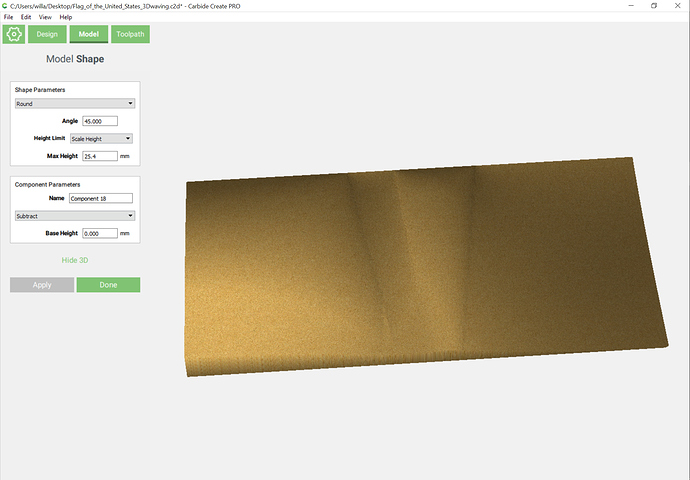 Adjust the modeling of the polygons until one arrives at the desired effect.

Select each element of the flag and assign a suitable 3D modeling effect: 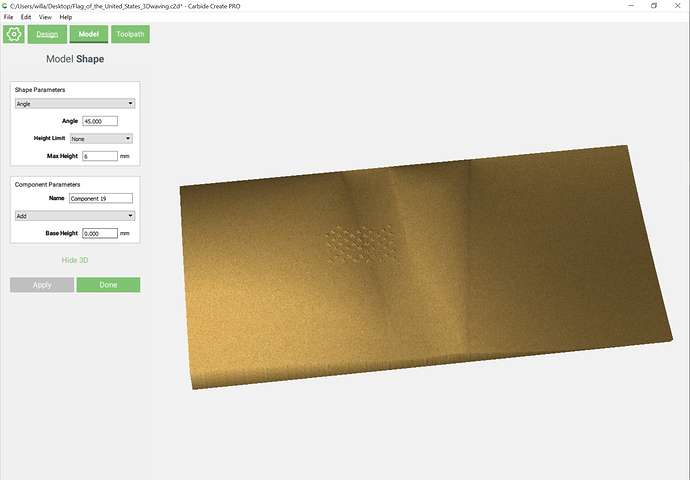 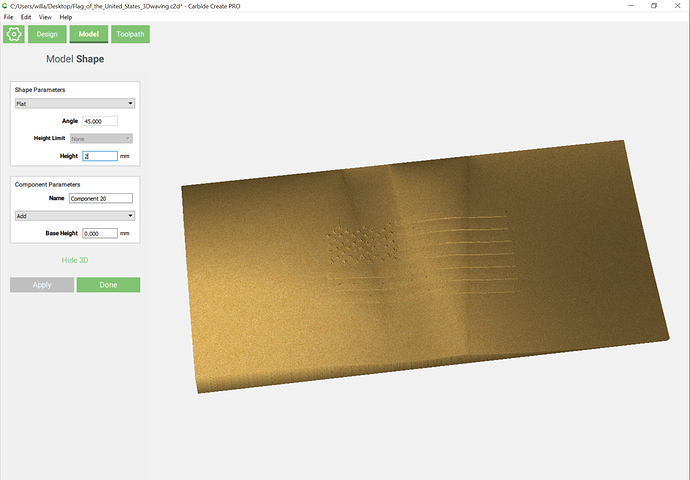 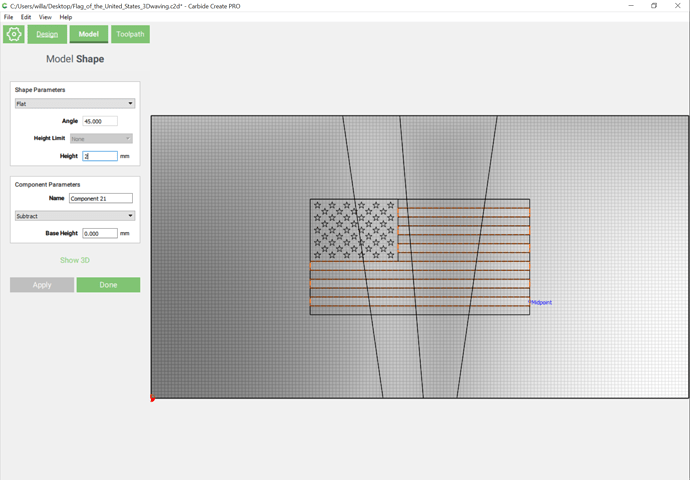 Then remove the surround material from the model: 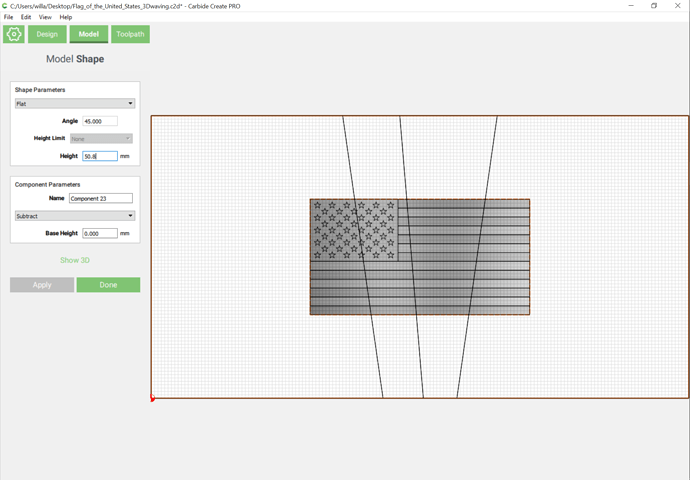 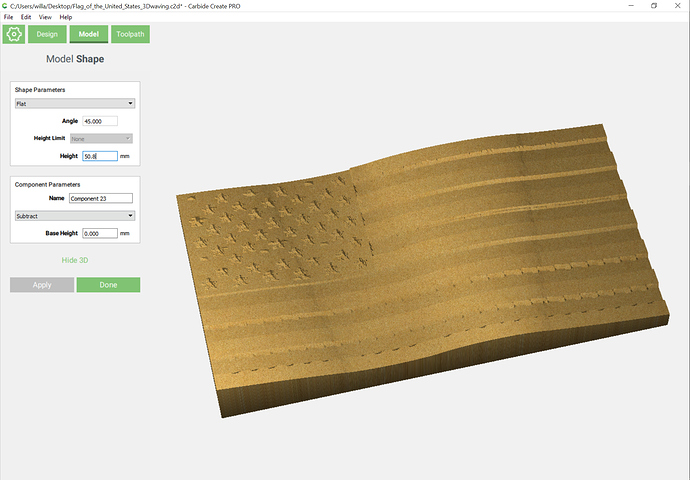