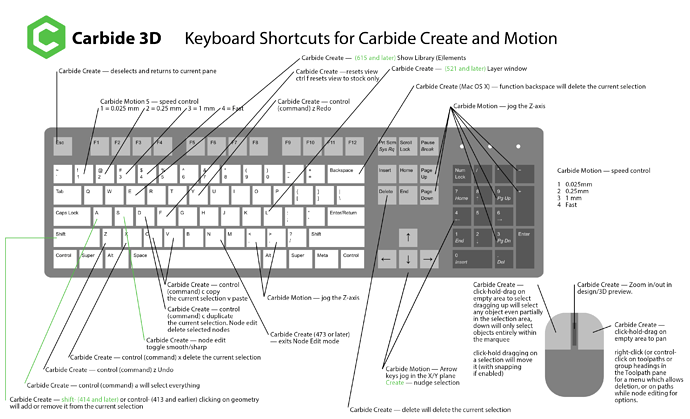 For folks who only use Carbide Create or Motion:

and Carbide Create build 727 adds a number of keyboard shortcuts, so warrants its own chart: 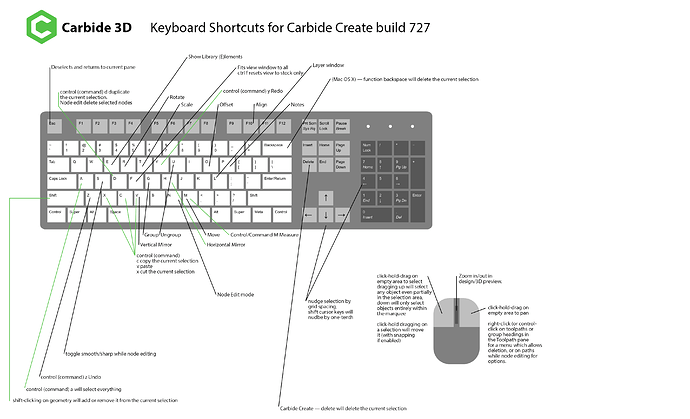 Note that standard keyboard shortcuts for file operations and so forth are not enumerated.

Please let us know of any corrections / additions.

This is amazing, my only suggestion is to have a CC and a CM version separately too

So what version of Create and motion do these work on.
Are there any up dates to either,out there now.
Also any idea on when the touch probe will be back in stock I like have one.
Jeff

I believe all the differences between CM3 and CM4 are broken out, and all the features in the current Carbide Create build are broken out — if not, let me know and we’ll update.

One day, I was reaching for something and my arm brushed against the keyboard (hitting one or more keys) and my machine started to move. I can’t remember what screen I was on but it was almost like I activated the SEND on the MDI screen. I have tried reproducing it many times without success. (V4 CM)

Yes, I would love to find a way activate the SEND key… (since I do a lot of MDI data input)

If anyone wants to roll their own, here is a bluetooth HID programmable controller to be the brains of your own x-keys like device. 12 buttons looks like it would handle all the shortcuts for CM.

Unfortunately, Adafruit is out of stock on the Bluefruit EZ-Key and has been for some time. Apparently they are redesigning it. However, according to comments from an Adafruit employee in the forums, it might not be available for a long time due to problems sourcing the components. Too bad, since it is really the perfect device for any kind of wireless HID project.

I’ve been working on a DIY wireless jog pendant for the past few days. I hope I’ll be ready to post the finished project by next weekend.

Hey Will - you’ve got a M for Midi and L for Log, how J for Jog in Carbide Motion??

I think the cheat sheet needs to be updated, some shortcuts have been changed lately.

#Done — let us know if anything was missed or should be further updated.

Is it possible to make all of the descriptions on the sheet consistent - either include the key combination in the text or don’t include it?

For example, “Carbide motion - reset Grbl to factory defaults” doesn’t give the key combination and has two arrows (one to control, one to 1), but “Carbide Create - control x delete the current selection” has one arrow to X and no arrow to Control.

If you choose to keep the key combinations in the text, perhaps reduce the verbosity by adopting a notation, for example “[Control A] Carbide Create - Select everything”. At the moment, sometimes it says “X will select everything” and other times it doesn’t as in “X Undo”

I guess I will have to switch my code from HID-Keyboard to HID-Mouse as there is no keyboard shortcut for Job-Stop command.

I knew most of these, but I have been longing for a keyboard shortcut to jog Z. Outstanding.